Does anyone know if the TM06 can use Panasonic NCR18650B 3400 mAH batteries?
Because these NCR18650B's appear to be flat top batteries, and seem to lack the protruding nipple?
Click to expand...

Most of Nitecore flashlights require button-top batteries due to their anti-reverse polarity design, so if your NCR B batteries are the stock flat-top batteries, you can always add a solder blob or use a button magnets
P 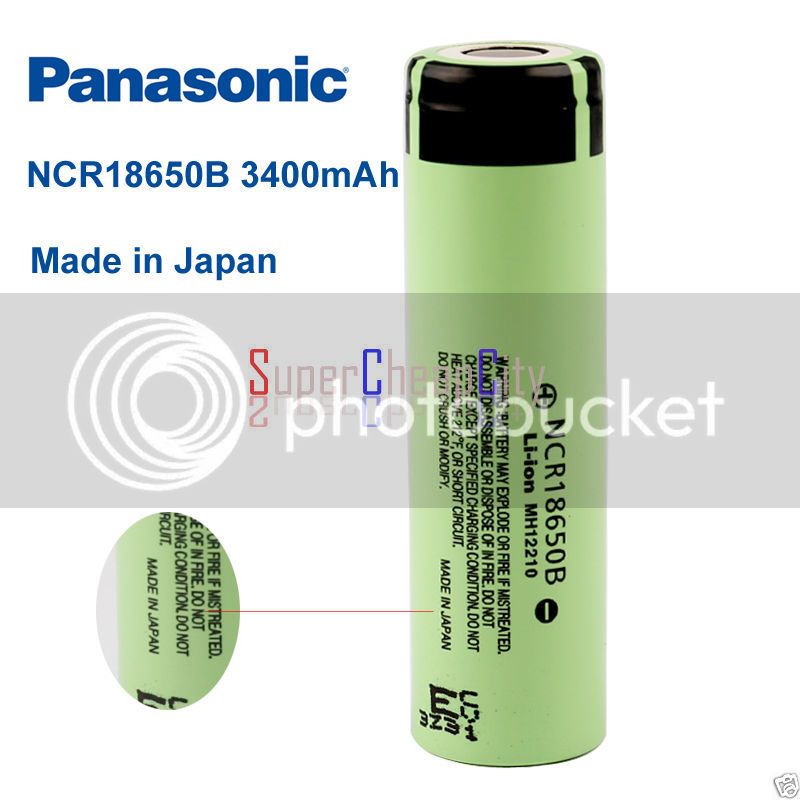 I wonder why Panasonic decided to make the NCR18650B 3400 mAH version so short?
Click to expand...

The 1st link, i.e Enerpower 3100mAh comes with protection circuit, which add a few mm to the length, while the 2nd link is stock unprotected 3400mAh flat-top cell.

You can browse Panasonic/Sanyo data sheet for their specifications
Most stock unprotected flat-top cell is about 65mm +/- 0.5mm in length

As above, PCB can add 2-3mm+ to the length of the cell(usually seen as a black section on the bottom of these generic green cells).

Also if a button top is added to the flat top, extra length again(all cells start out as flat top, the button tops are added after by manufacturer etc)
N

peterharvey73 said:
I wonder why Panasonic decided to make the NCR18650B 3400 mAH version so short?
Click to expand...

The industry standard for the 18650 battery is supposed to be 65mm in length.

With the addition of the button top and a protection circuit, the length has grown.

NoNotAgain said:
The industry standard for the 18650 battery is supposed to be 65mm in length.

With the addition of the button top and a protection circuit, the length has grown.

Hello, just got for my "Birthday" a Nitecore TM06S and i love it but wonder what is the difference between the TM06 & the TM06S? Also i wonder why it wont take any RCR123 or CR123 batteries seems it would be more convenient?

The original Nitecore TM06 uses a Cree XM-L2 U2 bin emitter for 3800 Lumens, and has a tail end switch combined with complicated operation of the side button to change modes.
The updated Nitecore TM06s uses the latest Cree XM-L2 U3 bin emitter which is up to 7% more efficient for 4000 Lumens, and the confusing tail end switch has been deleted, for the conventional and much easier to use side switch which controls both on/off and mode changes.

Notice how their tail cap designs are different as a result.

Being able to accept CR123's and RCR123's is certainly very convenient, but it reduces the overall efficiency of the electronics.
Here, the TM06/s have focused on outright power and lumens, rather than the convenience of being multi-battery type powered. 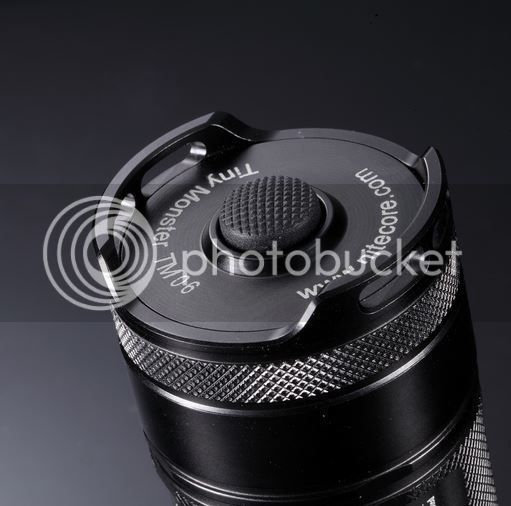 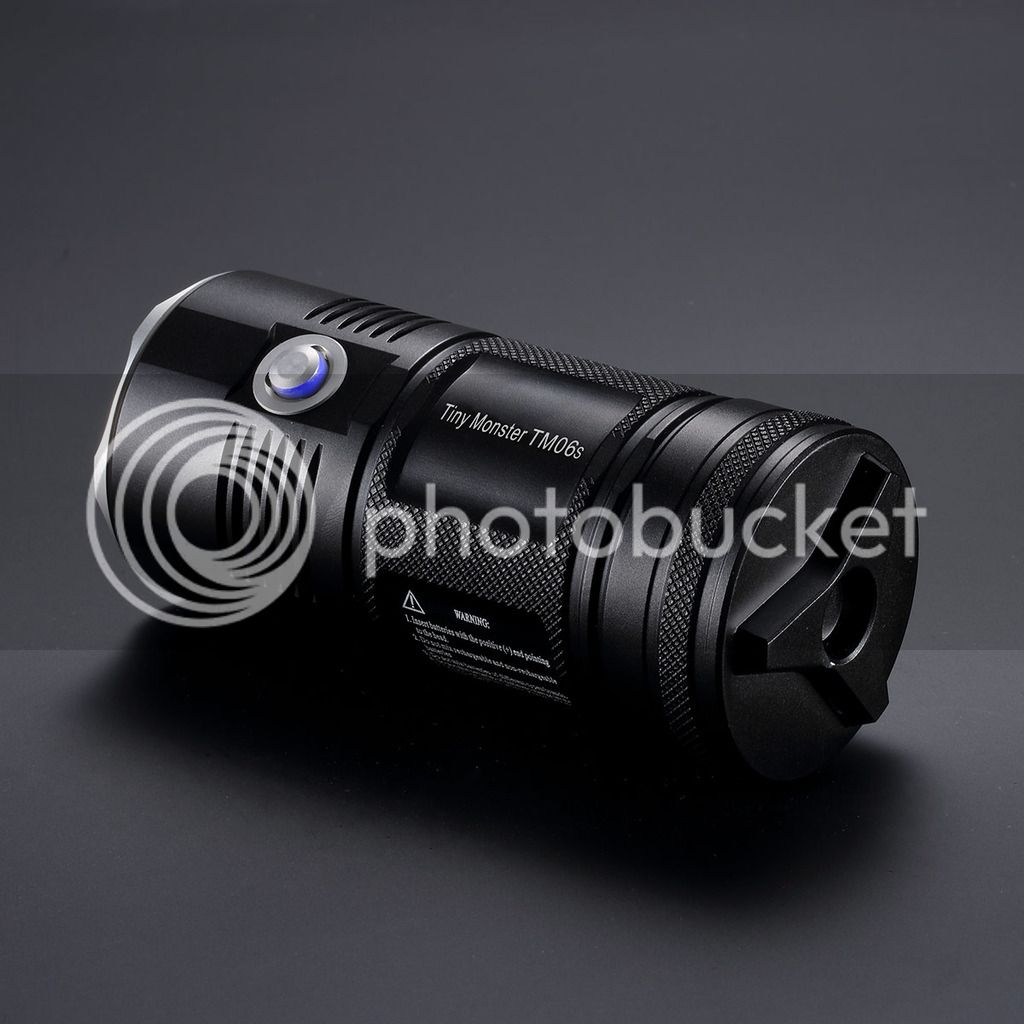 As for the RCR/CR, the short answer is one won't fit, and two of them will blow it up as you will increase the voltage by doubling up. Can I ask why they are more convenient? The 18650 batteries are very common.
S

Oh, and you would need a light meter to spot 200 lumens increase, all other things being equal.

I do not know the specifics of the Nitecore TM06S.

In general, however, CR123A batteries are of little use in high-power flashlights. That is because those batteries are typically rated by their manufacturers for a maximum continuous discharge current of 1.5 amps. Many flashlights now pull more than that on their highest modes.

CR123A batteries were great when SureFire was putting them in low-power incandescent flashlights in the 1990s. Today, however, many modern LED flashlights demand more than CR123A can provide.

CR123A batteries still have an important place in modern flashlights. Their small size, long storage life, and good operating characteristics at extreme temperatures make them an excellent choice for little-used, emergency flashlights, as well as for other uses.

As is noted above, there is sometimes a sacrifice that a designer must make to achieve compatibility with CR123A. More and more, of late, designers are choosing not to do that.

The Nitecore MH20 is an example of a flashlight that can run on either 1x18650 or 2xCR123A. When, however, selfbuilt performed runtime testing of the MH20 with CR123A batteries, the high current draw tripped the PTC protection in his batteries.

Here is what selfbuilt wrote when I asked him about it:


KeepingItLight said:
Your runtime charts and accompanying explanation suggest that the CR123A batteries have been driven to their limit. Huge drops in output are not caused by intelligent flashlight circuits. Instead the batteries’ PTC has kicked in, forcing reduced current flow. Is this a good flashlight design?
Click to expand...

selfbuilt said:
Yes, I find it a source of concern to see PTC features kick-in on CR123A cells. I have certainly see a lot of this over the years in testing (especially common on 4xCR123A lights). Examining the cells, you can sometimes see clear evidence of damage in the wrappers around the PTC. Invariably, the worse-affected cell is the one closest to the head (where most of the heat is concentrated).

It's fundamentally a problem of how heavily-driven lights are now on max, in general (i.e., not specific to Nitecore - or Olight, or Thunite, etc, etc.). Multi-cell CR123A setups often don't seem suitable for sustained runtimes at max levels - even in lights with thermal regulation (which is designed to protect the circuit, not the battery). But of course, that's based again on made-in-the-USA CR123A calibration levels for PTCs. With made-in-China cells, you would probably almost never see that runtime pattern.

Ultimately, I would encourage people to use care when considering multi-cell CR123A use on any highly-driven light.

If you limit output in a 2xCR123A flashlight to somewhere around 650 or 700 lumens, you should be okay. That may mean staying away from the turbo and high modes.
Last edited: Apr 13, 2016
R

Gentlemen i need help! I did have trouble yesterday night getting the light TM06S to come on at 1st, it blinked 4x showing full charge but either the is an issue with light or my Batteries!
I only have 2 nitecore 2300 mah and 2 Panasonic 3500 mah batteries and got them all few months ago and all work perfect in my other 2 lights.

Problem is/was after light finally came on i could only get 3 and not 5 modes, my highest was equal to my 1K lumens at distance but wider coverage at the sides and after 10 min. recharged batt and now nothing but light at switch blinks 4x showing full charge but no light!

I do know it said not to mix brands of batteries, so using 2 2300 mah and 2 3500 mah from different companies could this be the cause of my probs. i have 6 more panasonic 3500 mah on order from Mountain Electronics and all i have are the protected ones!

Your batteries are the problem!
1) Never mix different makes, models, or capacities; it could result in an explosion.
2) Your TM06s 4000 Lumen flashlight requires a high current, in other words, it requires a battery with a fast discharge rate.
The batteries you presently have and on order are only NCR18650B's with a maximum discharge rate of only 6 Amps, but it should be enough.

Thank You! This "Shining Sickness" is quite expensive, but fun since between my P-12 and EC-11 and now the TM06S i am doing more then my fair share to light up the night!
But at least i am ready for the "Zombie Apacolypse"!

Mixing batteries with different capacities can be very dangerous. When the ones with lower capacity are exhausted, reverse charging may occur in the flashlight.
R

This is Sanyo and Panasonic's and newest high discharge capable 18650 cell, rated for up to 10A continuous discharge. It is a good compromise between IMR and regular LiCo cells, offering lower internal resistance and higher discharge rate capabilities and higher capacity than IMR. This is a popular cell for high drain XM-L & XM-L2 lights because it's lower internal resistance allows these high forward voltage LEDs to remain brighter longer.
The protection circuit features a high-quality Seiko IC (made in Japan) with AO MOSFETs.
Diameter:18.7mm
Height: 69.0mm
Manufacturer Cell Specifications:

These cells, like all lithium and IMR cells, should not be discharged below 2.5 volts
R

So i guess i will now have about the best batteries avail. or at least the best i can afford! these were $9.95 which is a 1/3 cheaper than the 1's in link to E-bay!

Again, i really appreciate all the help!

1 more question on a review somebody said the the old TM06 had an issue with pulling 2 of the 4 batteries down so low it would quickly destroy them and he hoped the new TM06S model doesnt have this issue???????????????
R

Well, i got all my batt in today and now have 8 3500mah and all i can say "Powerful" is an understatement!
P 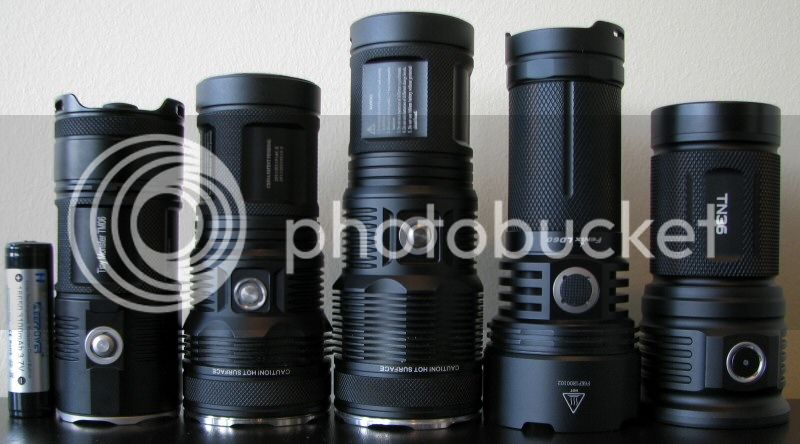