Just about got my truck straight now. The problem was the combustion chamber was sometimes leaking at higher speeds and on acceleration although it ran good otherwise. The white/gray crust that was getting on the plugs were getting other places also. I think it's the gas I've been using regular.

Sea foam is some good stuff and has done more for that engine than anything else I've tryed.
I got a wild hair and bought some and did a pour in your carb treatment that I hadn't done since 2008.
You pour a little over half in while keeping your engine revved up to keep it running and then you use the rest to kill it.
Let it set 20 minutes and then crank it and enjoy the purdy white smoke it puts out.
Keep revving till it clears.

That treatment really helped and later on I put a whole bottle in the tank...man what an improvement! Truck gets better gas mileage also.
The treatment is supposed to burn off any crust or carbon on the valves and pistons and free up sticking rings. It seems to use less oil also- a half a quart compaired to a quart and a half at highway speeds or higher.

I like sleepers also bykfixer. I would like to fix up my "hutch" mobile under the hood and drive it around again. People would look at it and say "rag!" and then I would surprise them and grin my opossum eating grin at them as I pull ahead.

Having problems with rolling the winders up and down now. Stupid truck....
If it ain't one thing it's another- if it ain't my wife it's her mother.

I had a Honda Prelude that had a built in window regulator issue. Being electric windows just aggrevated the situation because all would be normal until the day it was not. With a hand crank window you can feel it coming on and maybe even halt it before something gets bent. But with electric windows you push a button and feel nothing.

Oh there comes a day you push the button and you hear the motor strain or your lights go dim from the extra drain on the system. But by then it's too late. Something bent. See, the Prelude was just that. A prelude for things to come from Honda. Many of the things that worked are still in use today like some plastics, some manufacturing techniques and the electric window regulator system from the Prelude generation after the one I was having trouble with.

The window regulator itself was great. It was the grease they chose to lubricate gears in the "scissor" like parts that hardened and jammed up the gears in the cog. It was like sticking a penny in between one or more the gears after a while.

That may be what's going on with your 71 truck GP. Perhaps a good cleaning of all moving parts and a glob of silicone grease on moving parts will get things going normal again. That is if nothing has bent. When mine bent I went to a junkyard and found one, cleaned that sucker to be like new and sprayed it with lithium grease. When I sold the car the driver side window worked normal. The passenger side? Well that was the buyers problem.

Like Ford and Chrysler, GM is not real big on retooling things, failures be damned. So there is a chance they are still using those same parts here in the new millenium. The guy behind the parts counter at a small Chevy dealer may know, since by now they probably changed the part number. The crooked hat wearing kid at the big city dealer? Well maybe, maybe not. But at the small dealer there's a good chance somebody there still has a 71 floating around somewhere but knows if the same regulator is used in Silverado's or Suburbans, Perhaps Impalas. If so then you can go to a local junkyard and find one on a crashed ambulance or one of those stoopel-ee-doo jacked up numbers that was barrel rolled a few times.
Last edited: Jul 31, 2021

Thanks Bykfixer. I can get a new one from rock auto fairly resonable. I think the plastic on the rollers have deteriorated and is now crumbling. Yesterday they got sprayed and greased. The passenger side works just fine whereas before it was very stiff. The driver's side is better, but it is like the round plastic rollers are now square. I left the door panels off so I can service it often. I think a new regulator costs from $21- to somewhere around $40. I'm not sure, but rock auto has different brands to chose from if I remember correctly.

Got one for my Ford truck that works well. Just put a starter on my Ford F150 yesterday afternoon. Going to try to get it on the road in the next month or two. Had some wasp nests in it. Ether does not work on redwasps. Use gas, mineral spirits or wasp spray.

Since we can now upload better here is my chevy and my Ford pickups I've been talking about. 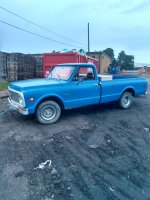 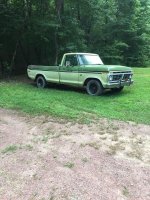 My ongoing project is a 1953 GMC pickup.

53' I think can wear the earlier windshield visor, good looks and functional 👍

Well, I think I've finally fixed it with wisdom from above.....The ignition switch. Man, that thing runs great, feels like it picked up 50 hp and has waaaay better bottom end. Doesn't randomly cut off either. I guess that thing should be part of a tune up after 60,000 miles. What came out wasn't original though- not with "made in Mexico" on it- not on a 71 chevy. It was also packed with a lot of grease which I think caused the connection problems. I put in the best switch Standard Inc. made.
Share:
Facebook Twitter Reddit Pinterest Tumblr WhatsApp Email Share Link

I detest working on cars/trucks.....

watches! and toy cars! and other hobbies