Digging through one of my drawers, and I hadn't looked at these since moving into this house 16yrs ago. They bring back a lot of memories. 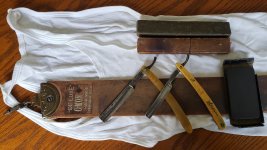 I've felt that strop a time or three, but what I can't unsee is my grandfather shaving with a straight razor...while hula dancing, something he picked up in the South Pacific during WWII.

These were his knives, though I believe a couple had previously belonged to my grandmother's dad, who died in the early 50s. 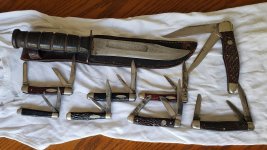 He was in the Army, and the Ka-Bar wasn't his issue knife or anything; he bought that after the war. The smallest is a CAMCO(made in the Camillus factory, starting ~1948), but he was fond of Boker "Tree Brand" and Case pocket knives.
I'm sure there were others that got reduced to toothpicks, as he had a habit of absentmindedly sharpening them while watching ball games on TV.

So what's up with the wifebeater? That's what he wore around the house. My grandmother gave me some of his old ones that she always kept for dust rags, and that's where that one came from.
It was kind of his trademark, though. In the few pictures my mother has of him from WWII, whether he's standing in a group, or sitting on a giant turtle, always the wifebeater. And he's always the only one out of uniform:ironic:
I even found a picture of him from the DOD's still media depository when trying to get info about the original Jungle Training School, where he was an instructor. 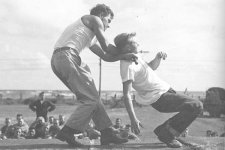 Yep, there it is.
So that's why the wifebeater!

While I've got the old blades out-my grandfather's best friend, and my mother's godfather, spent WWII in North Africa and Europe. He came home with a lot of booty in the form of German dress sabres. This is all I've got of his: 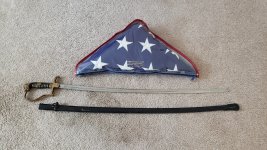 I've got better knives than they had, but mine aren't very evocative.
L

Very cool collection of memorabilia. I’m glad I still have my dad’s old Fairbairn Sykes dagger and a couple of old Remington folders. It’s not like today’s awesome materials and construction but they tell a story.
X

Thank so much for posting this Owen! it brought back memories of my grandfather, who didn't own as many cool knives, but always carried one that he kept razor sharp.

Thanks for posting this thread. My grandfather also fought in WWII, although he was in Europe. I never saw a Ka-Bar, but he had a few old school folders, case knives mostly. I remember watching him sharpen the knives on his "Arkansas" stone, which was literally a large, jagged rock cut flat on one side. The flat side was dished out from use, but it didn't seem to cause a problem.

This last bit may be off topic, but he and his squad were captured by the Nazis toward the end of the war and kept in a barn for a short time. Their German captors knew an allied victory was inevitable, so my grandpa convinced them they were better off surrendering to the Americans than to the Russians. They all returned to allied lines, the captors and captives having traded roles. Shortly after the war, an article on the incident was published in my Grandpa's local newspaper. I have a laminated copy to this day.

New knife to replace and old one