Pandemic supply chain in your area

Gasoline and diesel went down a penny today in my area. Two at some stations.

turbodog said:
Several of my clients are MD specialists (surgeons, internal med specialists, etc). Couple of weeks of missed work and they are out of money. A lot of the 'slavery' is self inflicted.
Click to expand...

Not everyone makes that much money. Or can even get a job sometimes. Sometimes even the $15/hour wage slavery is not attainable for some folks. It's almost like people have their opinions based on living in entirely different worlds... oh that's right they do..

I work at a hospital right now. There's a huge wage gap between those people and the rest of us.
A

bykfixer said:
It seems baby formula is in short supply in some areas.
Click to expand...

knucklegary said:
From what I've heard not much baby formula here in CA.. I wonder if mothers who easily produce milk can help supplement others, sell their milk? Could be a lucrative business 😁
Click to expand...

Knock some girl up and disappear is what I see a lot of guys doing these days.
H

One option for some dealing with the baby formula shortage is a milk bank. It's not cheap at $5 an ounce, but better than having a baby starve if you can afford it. Here's a news article about it:

The other option is to go to the southern U.S. border where they shipped pallets of baby formula for the illegal immigrants coming into the country and ask for some in person.
H

Here's a news article and a news video about the diesel shortage and the area it is currently affecting.
https://cdllife.com/2022/diesel-shortage-fears-loom-for-the-east-coast-loves-monitoring-situation/

Found out the main reason for the diesel fuel shortages on the east coast of the U.S. The vast majority of the fuel is shipped by railway. During the pandemic, the railway companies laid off a lot of workers with no notice. When they wanted to hire them back, there weren’t many takers. Few people wanted to work for them. Recently, they had a railway strike that was stopped by the courts. The company (BSNF) changed their contracts to require employees to be on call for all but two or three days per month or they would be fired. This basically was to retain an already low workforce. It might have backfired. I’ve heard that they are only shipping Pilot half their order of diesel because they are backed up from a lack of employees and failing parts/locomotives. They have told these companies that if they complain to the public, they will be cut off from all future orders. That’s why you haven’t been hearing about this in the news. It could take a couple months to hire and train new employees plus another 6 months to work through their backlog of orders. That is the best case scenario. If nobody continues to want to work for the railway companies, this situation could drag on even longer. This also affects our coal that is shipped to power our power plants. The fuel companies are having to ship the fuel by truck because of this massive bottleneck. Expect rolling blackouts in the coming months. Expect some gas stations to have no fuel. Expect only half or less of the food to make it to the grocery shelf. Stock up, and plan accordingly.

I doubt BNSF changed contract terms if the job was getting done. They, like a lot of other places, have deadlines to meet and employees that are no-shows.
H

I’ll refer you back to posts 321,329, and 333 of page 17 of this thread about the BNSF contract changes and near strike (which was blocked by a judge). There was nothing to stop fed up employees from quitting after the company and the judge denied them the right to strike.
H

It seems Pilot Flying J's problem isn't with BNSF, but Union Pacific Railroad. Here is a video of the CEO testifying of the problem and how bad it really is. This is going to get bad fast.

Will be fine. The recession will drop the need for fuels.
H

turbodog said:
Will be fine. The recession will drop the need for fuels.
Click to expand...

Unfortunately, it won’t drop the need for groceries that get shipped by diesel truck that will only get half of their diesel and DEF fluid at the service stations. It won’t help first responder vehicles like fire trucks and ambulances that are also diesel. It won’t help sanitation workers or delivery truck drivers who may also be driving diesel vehicles. Worst is just about all farming equipment needed to plant and bring in crops for the next batch of food at the supermarket runs on diesel. Jet fuel is made in a similar refining process as diesel. You may have shortages of jet fuel as well. So we’ll be fine as long as we don’t need trash pickup, package delivery, police cars, ambulance service, electrical utility trucks, fire trucks, military vehicles, tractors, semi trucks, backup generators, or air travel. A great deal of our economy depends on diesel. Without it, the country grinds to a halt.
H

Just got back from the pharmacy (Rite Aid). After waiting an extra week for four of my prescriptions to get refilled, only one was. The three that were considered over the counter are now all on backorder with no date when they will be available next. This has never happened to this degree. One was ordered by the gastroenterologist for helping with intestinal pain. The two others were vitamin B2 and B12 to help with issues from celiac disease. All pretty important, maybe not initially life threatening. Seems supply chain issues are starting to hit the pharmacies now. With MediCal insurance in CA now, over the counter medications are restricted for me to Rite Aid brand. Basically, they can’t just pull some B2 or B12 off the shelf because the insurance won’t cover it. For stuff that is not over the counter, they have to use different brands if one isn’t available (considered more critical). For over the counter stuff, this is causing a bottleneck and shortage because they aren’t allowed to switch brands when one is out. If you are taking over the counter medications prescribed by a doctor for your health, be aware the supply chain issues are starting to effect the pharmacies in this area.

Now that the Abbott baby formula plant in Michigan is restarting, this will take some pressure off soon.
H

Just got back from the Santee, CA Costco. Had price shock. First, there was absolutely no fresh bone in chicken available for sale. Had just been raised from $0.99 /lb. to $1.29/lb.. There was some boneless skinless chicken around $3.50/lb. Going to the frozen section, the 10 lb. bag of boneless skinless chicken breasts that went from under $20 to $29 is now $40. 4 lbs. of bacon have shot up from $16 to $20. 4 lbs. of butter is now up to $14, used to cost under $10. If prices keep going up at this speed, we are going to have food riots in the coming months. If these prices are an indication of food scarcity, we could have worse problems than food riots when the stores run out of food. It’s one thing for people to protest or riot over high food prices, but what are people supposed to do when there is no food?

I heard this morning that OPEC is ramping up production. It'll take a couple or few weeks, but it should be meaningful.
H

Saudi Arabia is selling the oil at $120 a barrel. This will do absolutely nothing to lower the price of anything. We may not run out of fuel, but we won’t be able to afford it or our groceries that the high cost of fuel will drive up. Until we start producing our oil to the maximum potential in the U.S., nothing is going to get better. We have to increase the supply of oil by producing it, not buying it from other countries at exorbitant prices. The U.S. can not function as a nation long term with oil above $100 a barrel.

Part of the reason "futures" for oil are rising is due to a thing called ESG score. The score is what many investors use to determine where to put their money in futures and stock in general.

Since oil companies receive a low ESG score lately the speculators choose to with hold investment monies that provides the cash for the oil companies to spend on "future" sources. And speculation is due to a higher demand for currently known petroleum sources means it may run out before new sources are available. Now the big oil companies have enough money of their own, but like most publicly traded companies they prefer to use other peoples money, as in money from the investors (called banks).

Combine that with a large slice of the planet choosing not to buy oil from a certain bad guy and it appears the current supply is even less.

Back in 2007 there was an article in Time magazine that indicated the planet had 5 years worth of oil and that was it. All gone. None. No more. Soon after that gasoline was over $4 a gallon. A similar game is being played now.

OPEC decided back in March to set back and watch for a while to see how this whole thing play out. See, if OPEC waits for prices to get too high that will lead to permanent loss of revenue when more people choose choose alternatives to travel, be it electric scooters, riding the bus or "gasp" buying electric cars. OPEC is a cartel of 13 nations including Russia. They would prefer that this so called green new deal not succeed. Nor do the folks who propose this so called green new deal really, truth be known. A United States Senator riding the subway? Yeah, right.

And supply chain issues play a role as the world awakened from the pandemic let up. Oil pumps were turned off and now that they are turning back on they are struggling to turn back on fast enough. We should see the spikes halt soon and the price of oil drop, but the price of gasoline itself will remain high. Relief will come for producers whose goods use petroleum for production though.

One thing I have learned recently is a fair number of people I went to school with have either died from covid, commited suicide during the lock down or just decided to exit the work force. Decades of skill are gone, kapoot, not returning while a capable replacement work force is not available. That has also added to the problem post pandemic.

Here's a Forbes article about the recent OPEC decision 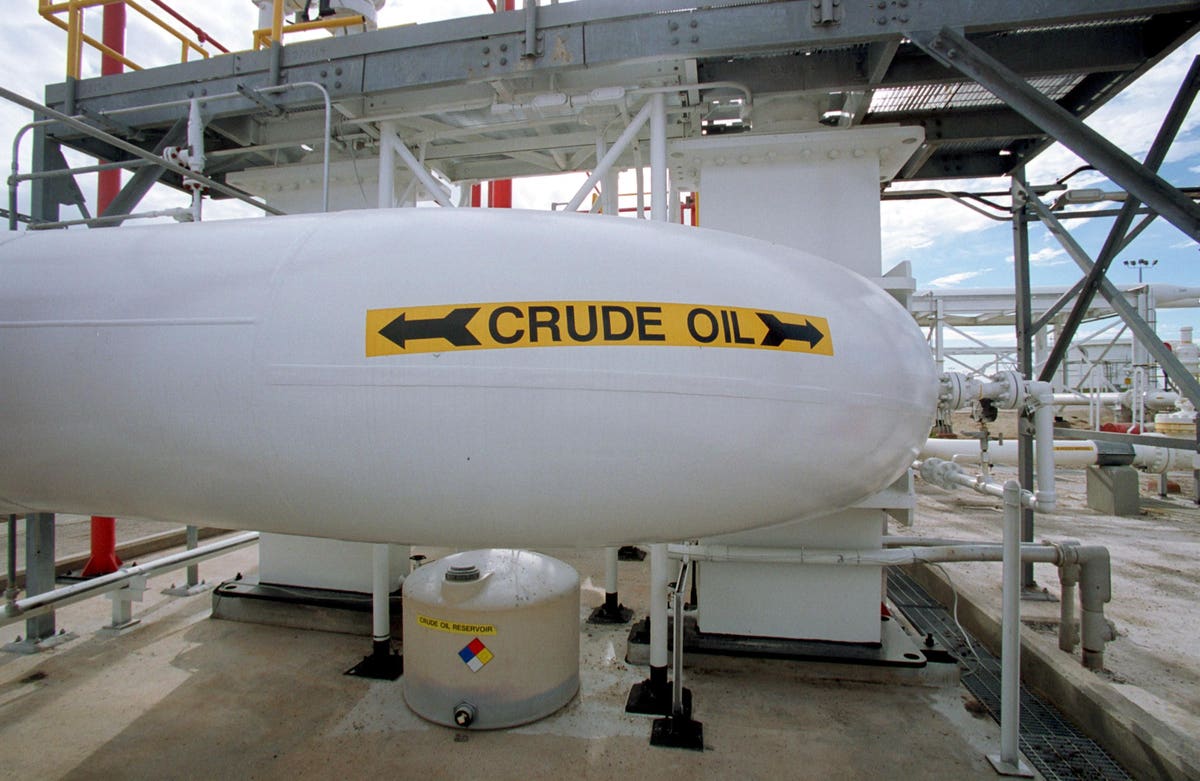 The price of crude oil continues to rise and hit new highs on the back of significant demand post-Covid19.

Environmentalists in your area
2

N
How many keys on your chain?
2

S
Do you get power outages often in your area?
2