Sofirn provided me the flashlight for review. It is a very well built light for the price. I am still analyzing the included battery and charger so no comment about those yet. The flashlight is very bright and heats up fast on turbo mode. I view this as good heat sinking. The beam is very floody and the tint is warm. I have had the flashlight less than a week so more information about it will be given in the future.

You can see images if you take this link:
https://www.flickr.com/photos/[email protected]/

Location
The Land of Smiles 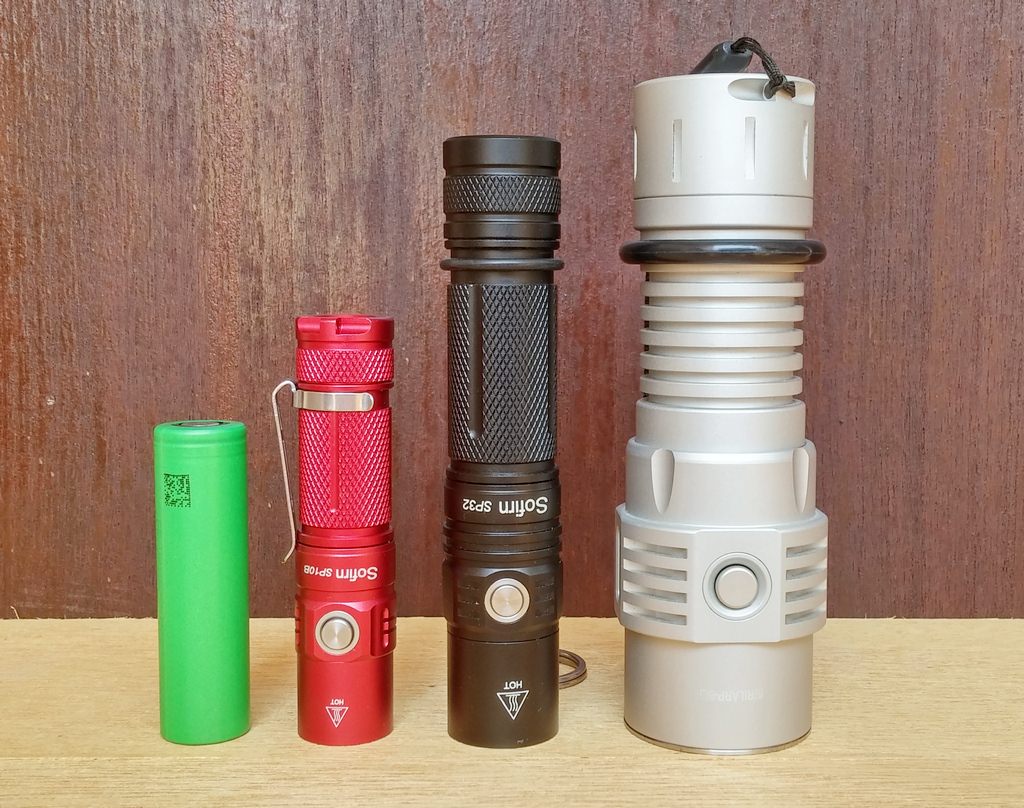 For Part 1 of my Sofirn 32a flashlight review I charged the Sorfirn 18650 battery with the supplied single bay charger. It took approximately 2 hours and 51 minutes to reach a full charge. I then took many photos of the flashlight’s beam in various modes. When I was done the battery had a charge of 3.8vdc. I took the battery out of the flashlight then and just let it sit around for six weeks. After six weeks the battery still had a voltage of 3.8vdc. On January 25, 2018 I used the 32a+battery for a 25 minute night walk. During the 25 minute walk the flashlight stayed in turbo mode but turned itself off three times. After the walk I checked the battery’s voltage and it was 3.72vdc. The battery it seems could not maintain a consistent voltage under load but had no difficulty when not in use. I charged the 18650 battery a second time using my Xtar VC2 Plus charger at 500 ma of current. It took a similar time of three hours to reach a full charge.
I let the battery sit for two days after charging it with the Xtar charger. I then turned the flashlight to medium mode and turned my cell phones timer on. I let the flashlight run for 3 hours and 26 in medium mode. Turned it off and took it with me for a walk. I used the flashlight for 25 minutes total. I turned turbo mode on 4 times. While in turbo mode the flashlight lowered its mode to medium after three minutes every time. The flashlight provided 12 minutes of turbo mode and 18 minutes of medium mode during the walk. When I got home I turned the cell phone timer back on and set the flashlight to medium mode. It burned an additional 3 hours and 24 minutes before reaching depletion. So the second battery charge provided 12 minutes of turbo output and 6 hours and 21 minutes in medium mode. The Xtar charger appears to have charged the Sofirn 18650 battery much better than the single bay Sofirn charger did.

After six hours and 33 minutes I noticed the low voltage blinking. The battery voltage was 3.38vdc. I used the Xtar VC2 Plus charger at 500ma current to charge the battery a third time. This charge took six hours and ten minutes. Battery seems to have a much greater capacity now.

The flashlight is a great size to hold. Not to large or small. After using the Xtar VC2 Plus charger the battery and flashlight performed admirably. The Sofirn 18650 battery is a bit of a tight fit in the SP32a flashlight. However it fits fine in my Nitecore, Convoy, Lumintop flashlights. The beam pattern for the SP32a is in the middle range not only flood or throw. A bit of both. You could say just right. Overall a nice flashlight and battery pair. Maybe my Sofirn charger is a dud or just should not be included with the flashlight.

P
With SolarForce out of the game, what budget tube to consider for LED drop-ins?