Pics of your largest and smallest flashlights

This could get interesting if everyone participates.

Please include make, model, and measurements / rated lumens accordingly. I used the coins for size reference. Here are mine. 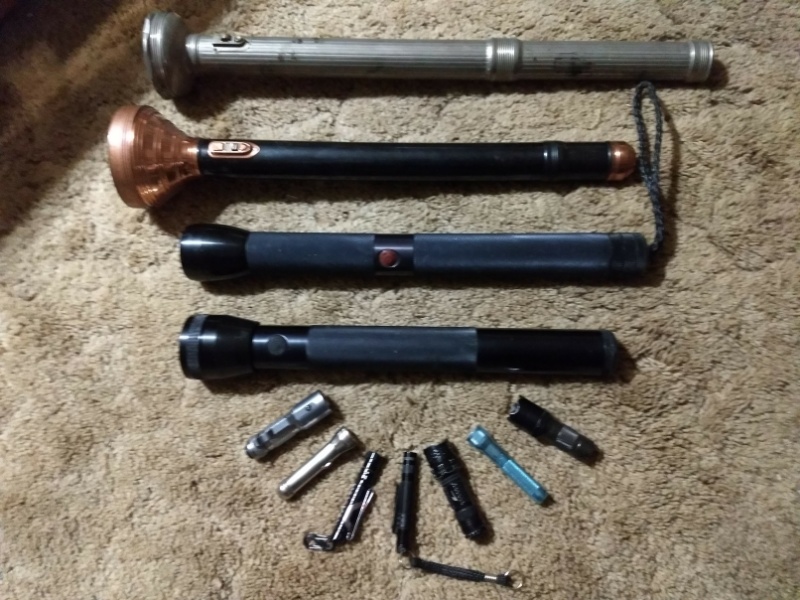 Right on byk! That's a great photo, and a well rounded group - and thanks for the writeup. Man, those old ones got a lotta mojo. 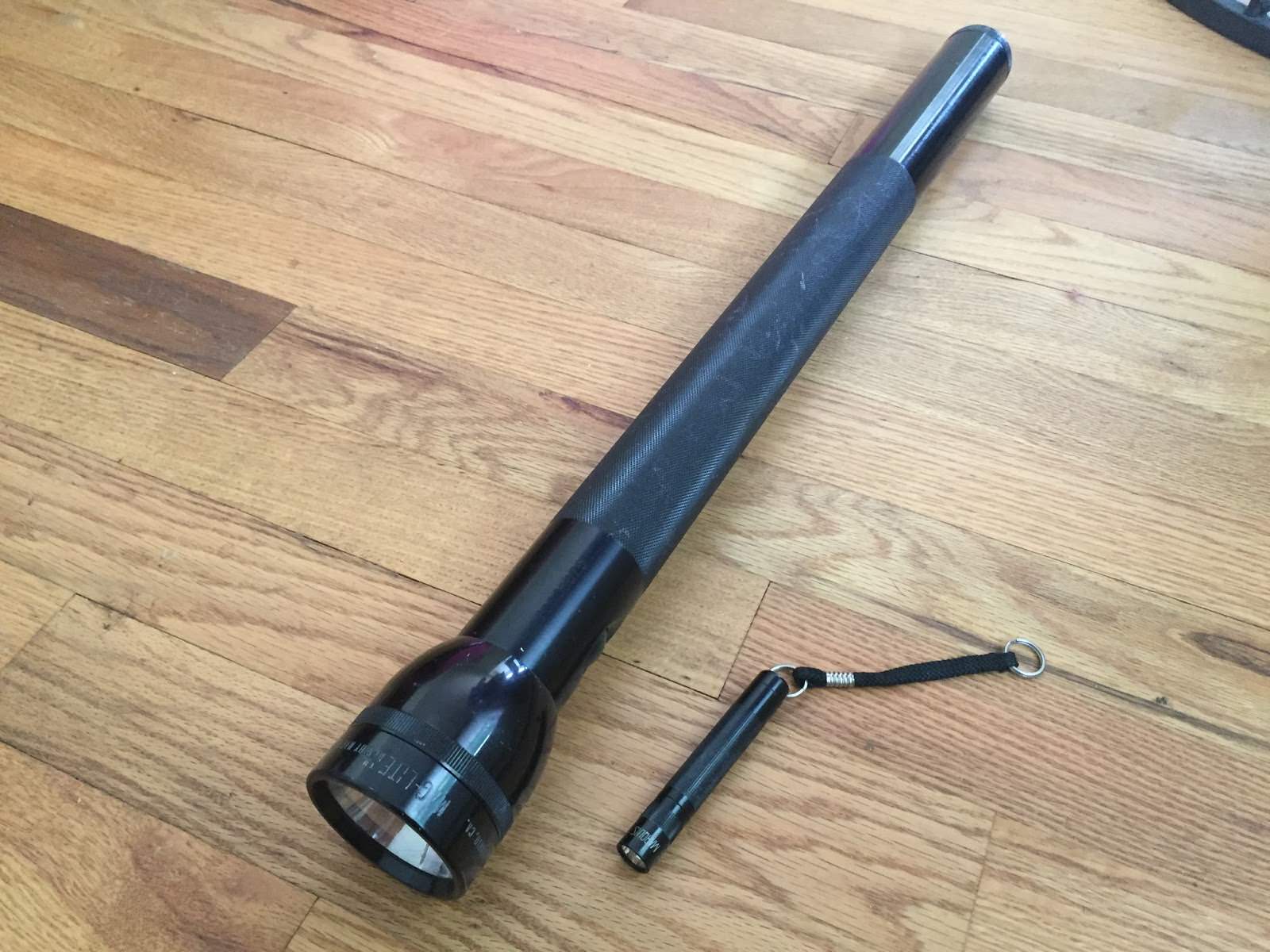 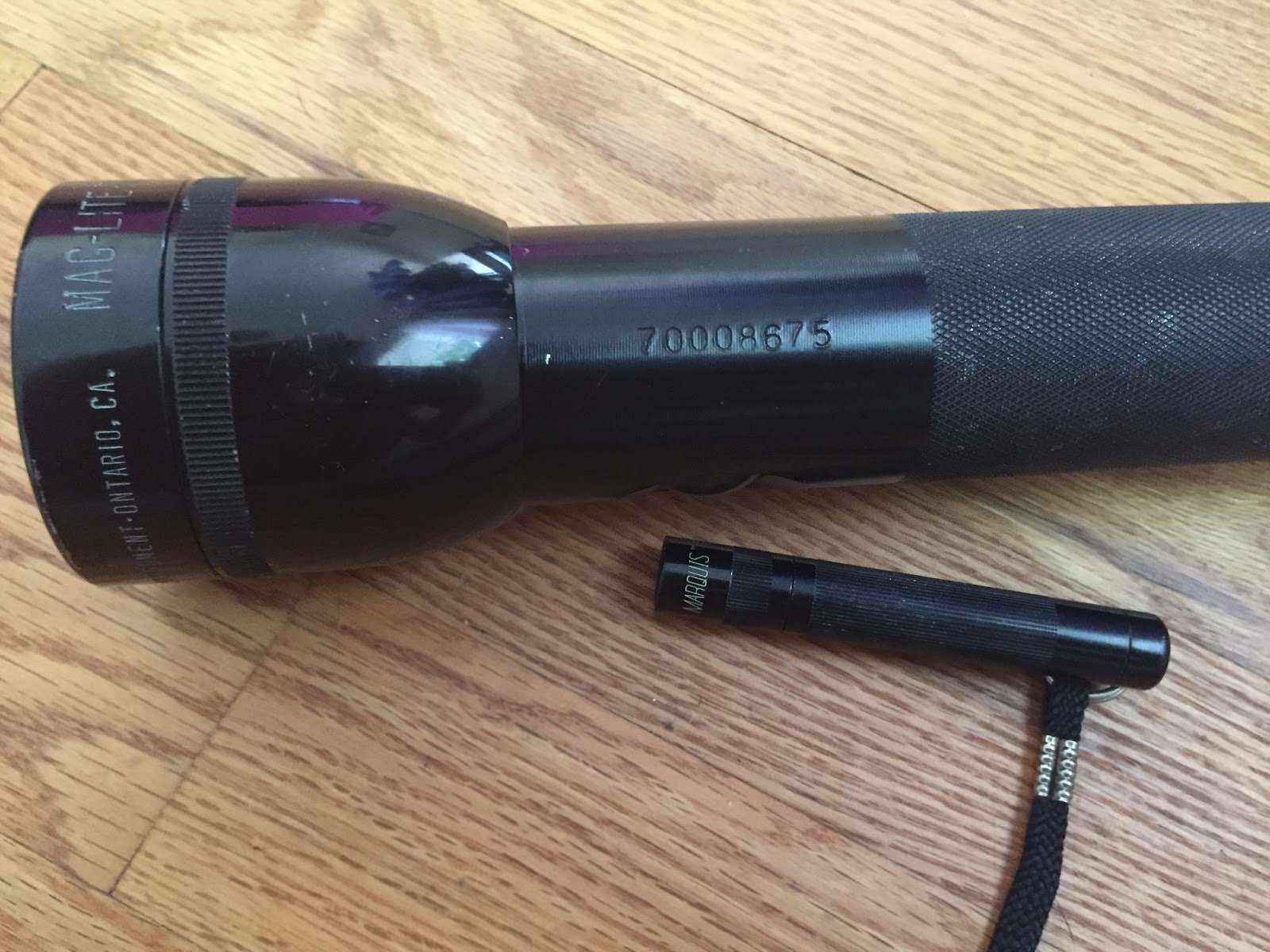 Mr. Fixer, I see you picked up that blue Keymate, very nice!! They look much better in your pics than they do on the auction sites. 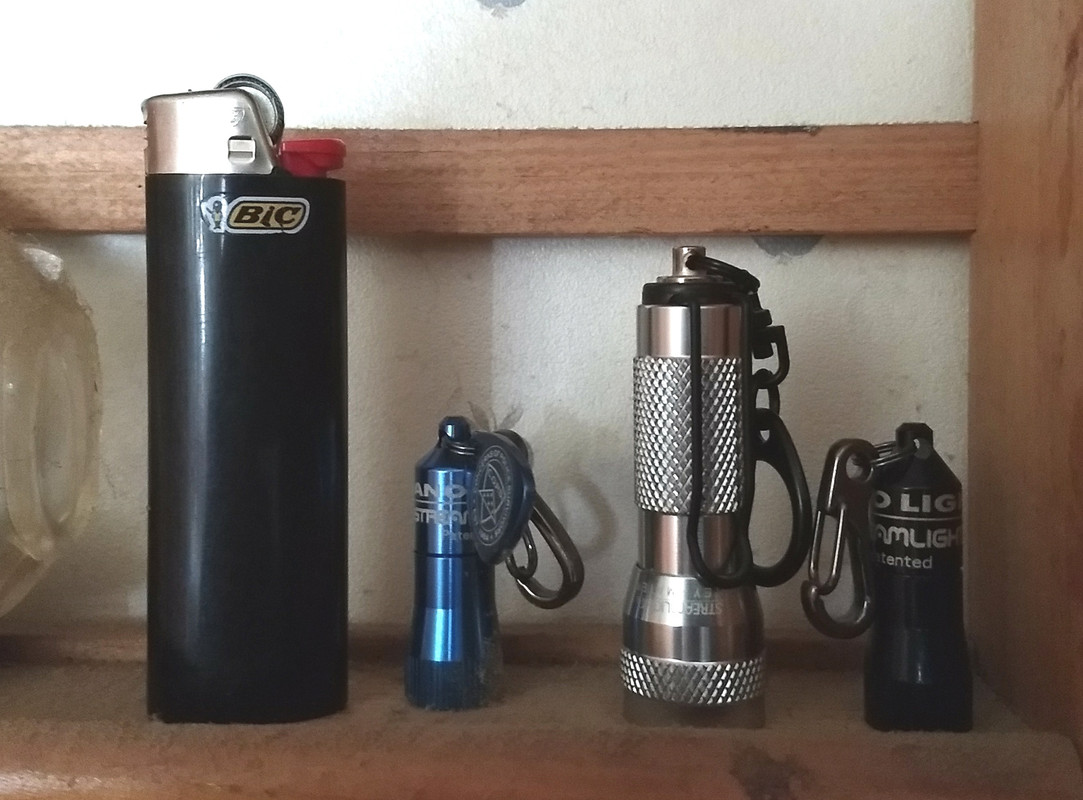 Lift'd commented he wanted a keymate incan. I showed him a link to the blue one in the pic above. He said "nah", so I put in a bid and won it.
The Nano is about 3x as bright as the incan Keymate. The Keymate LED is amazing for it's size.
Last edited: Jun 3, 2018
G

Nice byk, those are tiny. I'd like to see them lit.

Way to go Liftd. I figured someone would chime in with a 7D. Not a lot to top that.

I think there are some folks on here running extensions on 6Ds that turn them into like 10Ds if I remember right. I've never forked over the cash for the extensions on fleabay but that would be one heck of a light!!

I scored another 7C but man is it rough. Gonna take some work but I'm hoping to have some pics soon.
G

Cool on the 7C. Yea, I saw those extensions but didn't think they seemed worth the $. I did order one of those lanyard ring end caps for the pre letter Mags. It was reduced to $18+, so I figured it could be interesting to experiment with.

Good score on the tailcap. 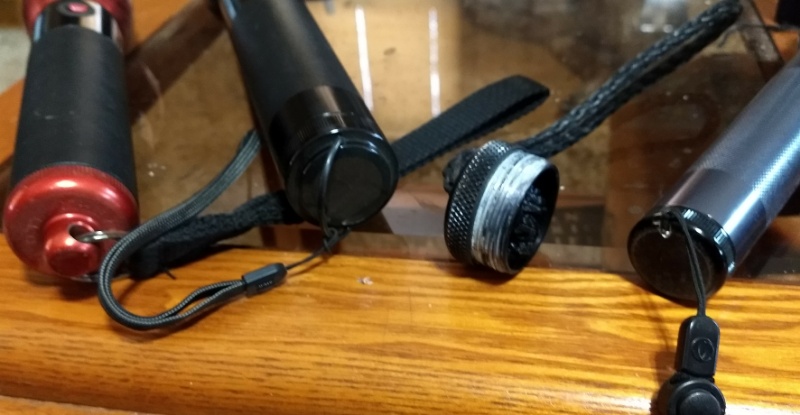 A Maglite lanyard ready tailcap with some other approaches.
- Left is what GT Price owned LA Screw eventually used. They mounted a stud onto the tailcap with a hole drilled for a split ring. Don Keller did that in the Kel-Lite days before GT Price owned LA Screw.
- Next to that, what Maglite did. They used a very sturdy C hook poked into holes like many companies did early on in history. The original idea was a nail hook, but Maglite took it a step further.
- LA Screw began with a hole drilled in a cap that fastened over a tailcap. You slid nylon cord through the hole and tied a square knot to keep it attached. The square knot was larger than the hole and viola...
- Finally, a bykfixer approach where a 90° hole is drilled using the outside edge of the cap. 1/8" deep from right angles using a 5/64" drilled bit and a camera wrist lanyard on a spare tailcap from an ML25 that was damaged beyond repair.

Most here use paracord of some sort for wrist lanyards. I use old style SureFire type of wrist lanyards that can be found in bulk for about a buck each. But adding a lanyard to an old Maglite is an old twist that never really caught on. The lanyard ready tailcaps are getting scarce. 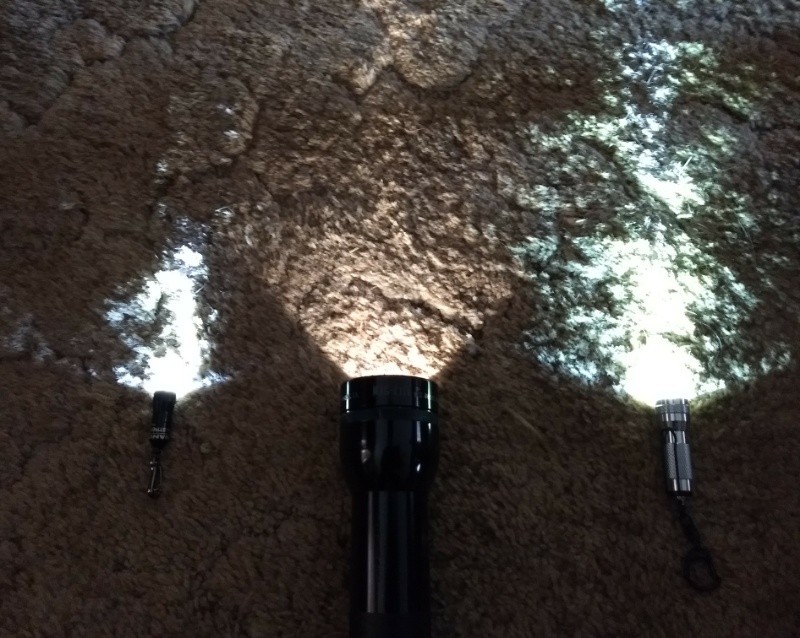 - The Nano is great for sudden lights out in a building and you need to find an exit.
- 2D... well that one has a rich history that many think revolved around police. The 2D was more of a household light. The 3D and beyond were more suited for duty lights.
- The LED Keymate is a very capable little light that has enough throw to use for searches inside a darkened barn or building. Coin cells don't hold much fuel though.
Last edited: Jun 3, 2018
G

Great photos byk. Thanks for the explanation of the end caps, and good idea with drilling the hole.

Cool tiny lights too. Yes, the 2D and 3D incan workhorses. I used them for a couple of decades as a Realtor showing houses when there wasn't much else commonly available.

Byk, I wouldn't mind seeing some more of those LA Screw lights. Liftd mentioned them to me. Do you have many examples of their different models / time periods?

I have a paracord knot that I tie around the barrel and when it's 100% tightened, it stays put and does not slip, but yet it can be loosened and moved to another light and re-tightened. I've been telling Liftd about this, and finally got some pics of it.

The important part is the slip knot around the barrel. After that, you can use any kind of fancy knots or methods to make a belt loop or wrist loop. This was a quick one. I don't know what it's called, but it's kinda like a hangman's noose without the lug that snaps your neck. When it's tight, it takes quite a bit of effort to even spin the whole thing on the barrel. I don't always like a wrist loop, but sometimes I do. It can be used in either hand position as shown.

I'm going to fashion one and connect the other end to the lanyard cap when it arrives, kinda like a handle on a thermos bottle. I got some cool yellow cord with a snake pattern that I want to make something out of for that purple 2C I just got.

Lovin' the loop idea. And the upcoming thermos handle idea. Did you come up with that or did you see it from an old school source like your grandpa or something?

Speaking of old school;
Yeah I could place all 3 or 4 of my LA Screw type of lights on the carpet for a family photo but instead...

http://www.candlepowerforums.com/vb...e-vintage-California-cop-light-company-thread
Here's a history of a few 1970's game changers thread with lots of stuff many did not know that is now chronicled by a few CPF members and quotes from the actual players in the game back then.

http://www.candlepowerforums.com/vb...-Don-Kellers-last-hurrah-the-Brinkmann-Legend
A thread about one of Don Kellers last ideas


Most of the photos can be seen by clicking on that annoying photobucket icon.

Edit: Well today clicking on the icon is not working for me. But right click, open in new tab and looking at the 'new tab' still works.

The other day images fixed with ~original added to the link had stopped working. Today they are working again.
Weird.

Point being JT is that many of the photos are not gone, you just have to do a work around to see them. 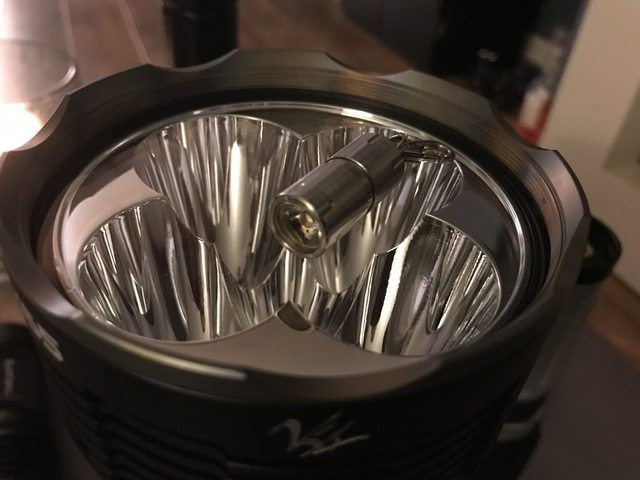 Thanks for the links byk, I'm going to look through them this eve.

I came up for the idea for the paracord loop after I started fooling around with knots. I had been trying to think of a way to make something for a Mag, and once I found that knot that stays ultra tight, I just thought about it until I came up with that.

Thx for the info about the photos, I had looked at a few threads that I couldn't see the pics on.

I am digging those knots! Makes me want to order another UCP Incan from Mag on clearance just so I can do the same combo. Do you have any links on how to tie them?
G

Unfortunately Liftd, I don't have anything yet to show how to do that slipknot around the barrel. I learned it a long time ago, and don't even know its proper name. It's pretty simple and effective after you tie it a few times. I tried to do a pictoral sequence of a couple different knots, but it's too hard to hold the knot and take the pic with one person. I'll have to work on another way.

I was able to get a few pics of the Marlinspike Hitch that I wanted to show you guys. It's a super easy and quick old shipmate's knot that allows you to use a stick, or, yes, a flashlight

as a T-handle for pulling on a rope, or to make a ladder if you have two ropes. It's pretty easy to look up, and I've seen about 4 or 5 different ways to tie it, but I tried to point out a way that is simple and easy to remember when first learning it, and kind of leads you into tying it other ways. It takes about 3 seconds if you already have the flashlight in your hand.

I'll try to post the steps in the general section when I get time. I think a lot of people will get some use out of it.

Interesting new topic for a thread. I’ll post something soon on this.
M

This is more of a width of the head rather than a length relationship. This shows the big 20k lumen mule from Vinh compared to the little Nucleus watch battery light light from George, shown with their batteries. The little Nucleus is about 1/8 inch in diameter vs. just under 3 inches for the Vinh. If my memory serves me the Vinh was a Tk75vn77.

So the size difference is about 2 7/8 inches.

Two awesome lights there Magellan, just which one to use on the car keys :thinking:
M

Haha! Ya sure wouldn’t want to accidentally sit on the big one!
Last edited: Jun 3, 2018 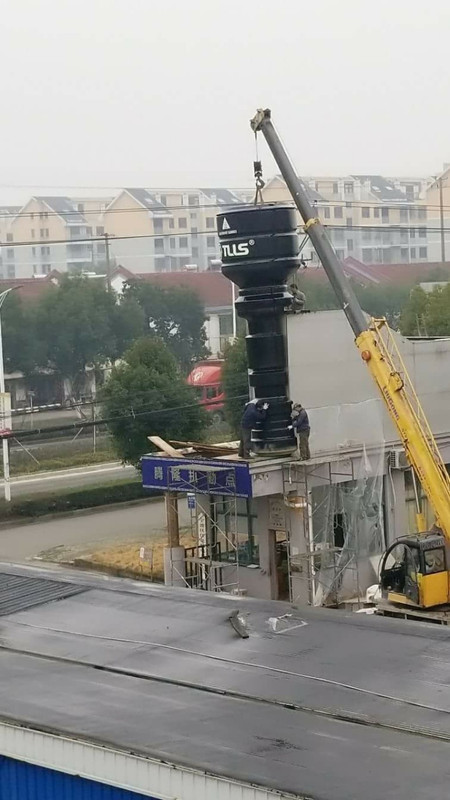 Do you name your flashlights?
2

Your Antique Flashlights in Review
2 3 4