Picture of your GIZMO ! 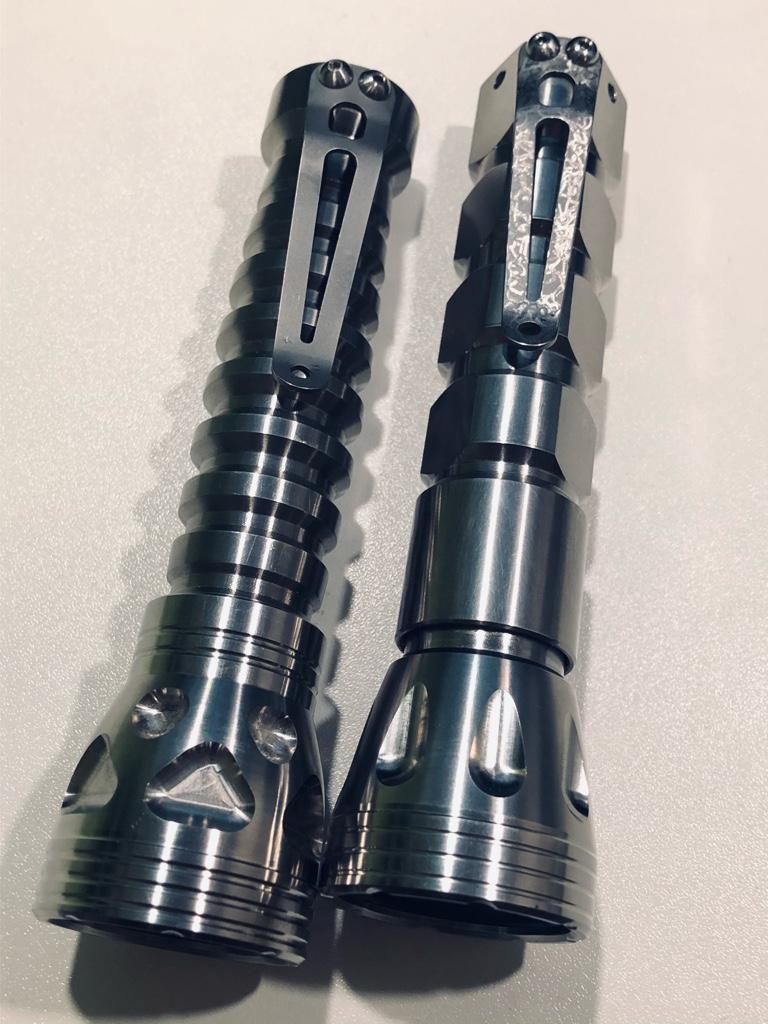 I will always have one of these lil' guys around. So dang handy. 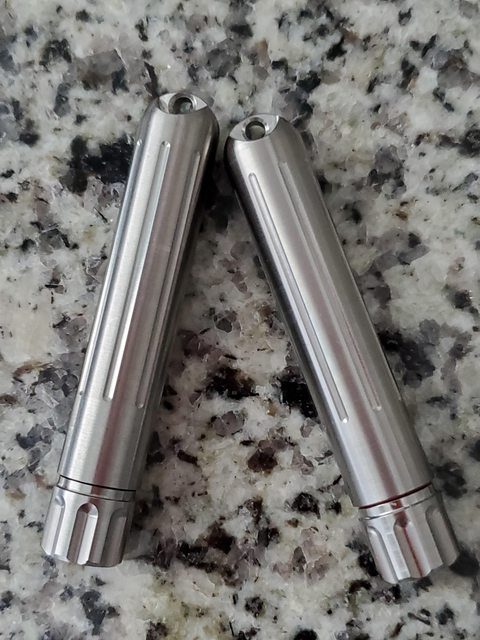 My first Haiku! This light is a work of art. Bead blasted version made but Don himself back in the day. XP-G2, 3S driver, 4500k. Well done McGizmo! 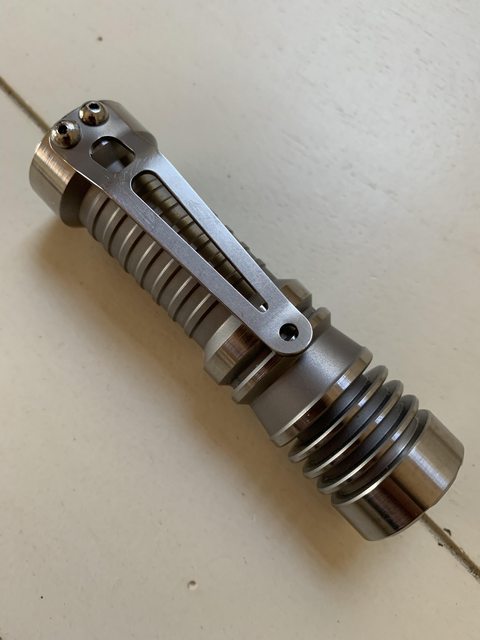 I just purchased a Diamond Etched clip from Don. This is the most beautiful and functional clip I've ever seen. Thank you Don! 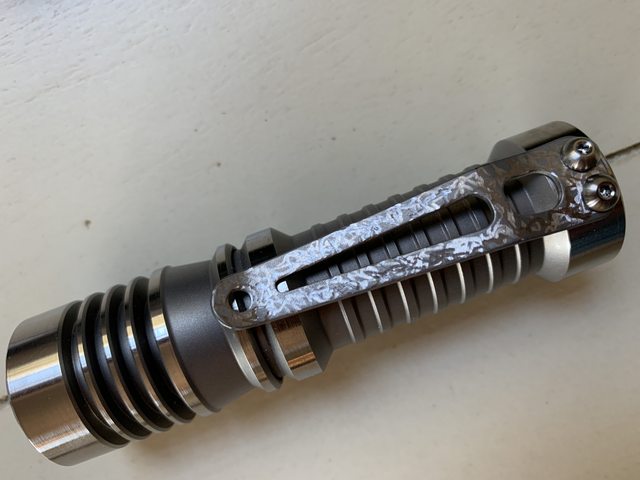 The clip is a nice upgrade.
D 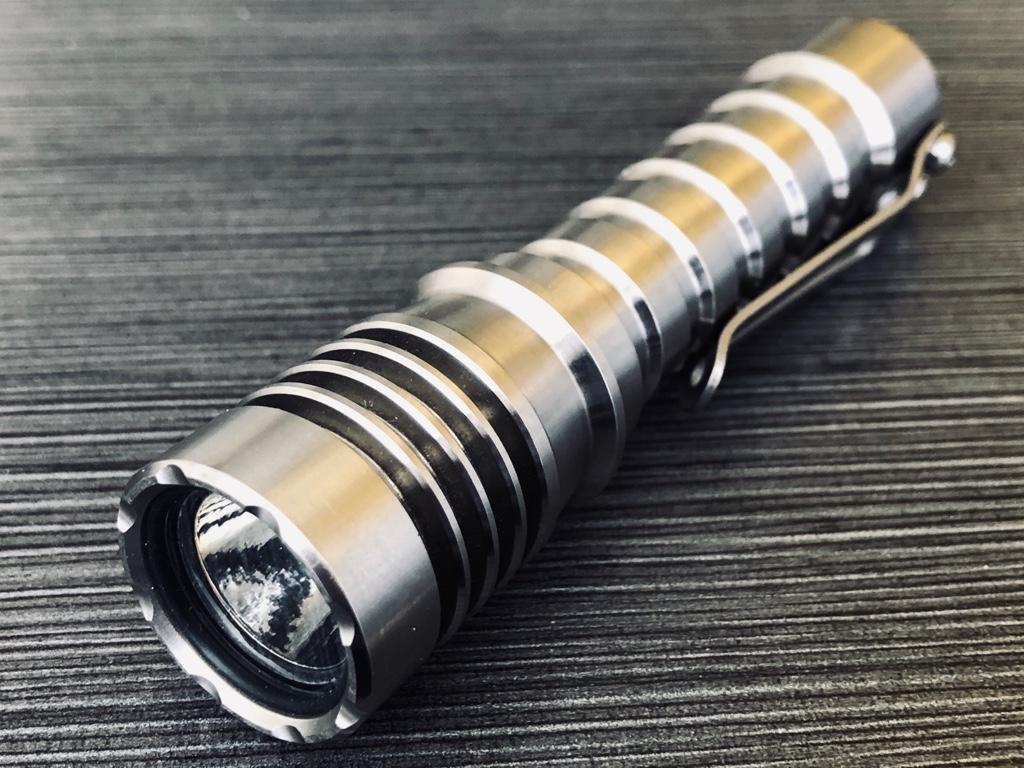 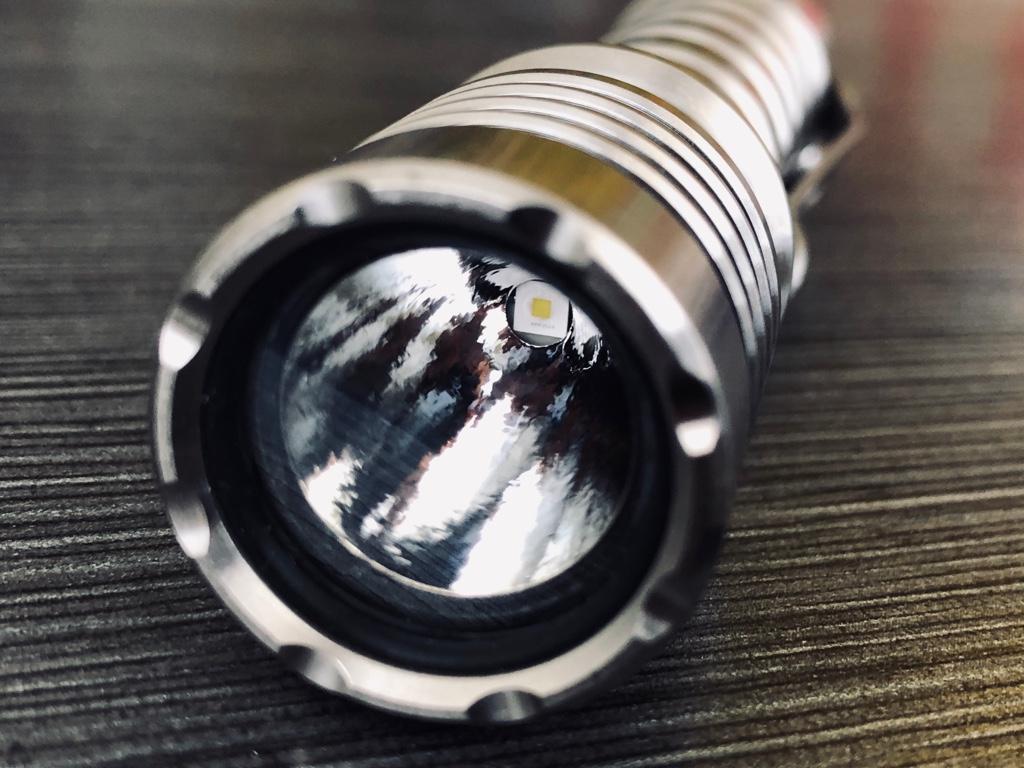 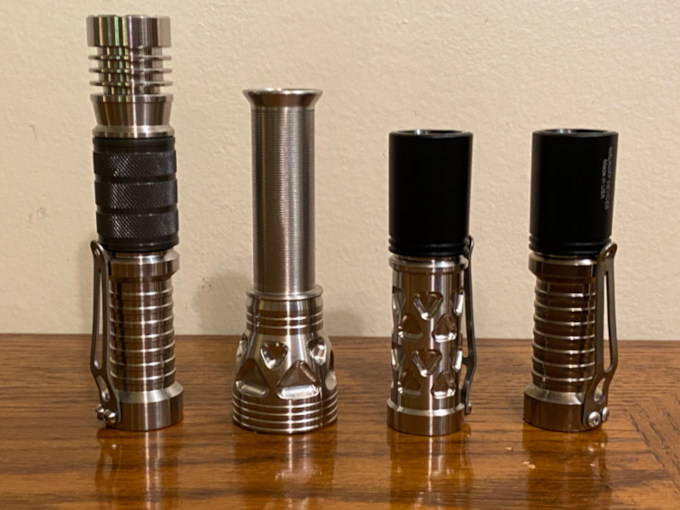 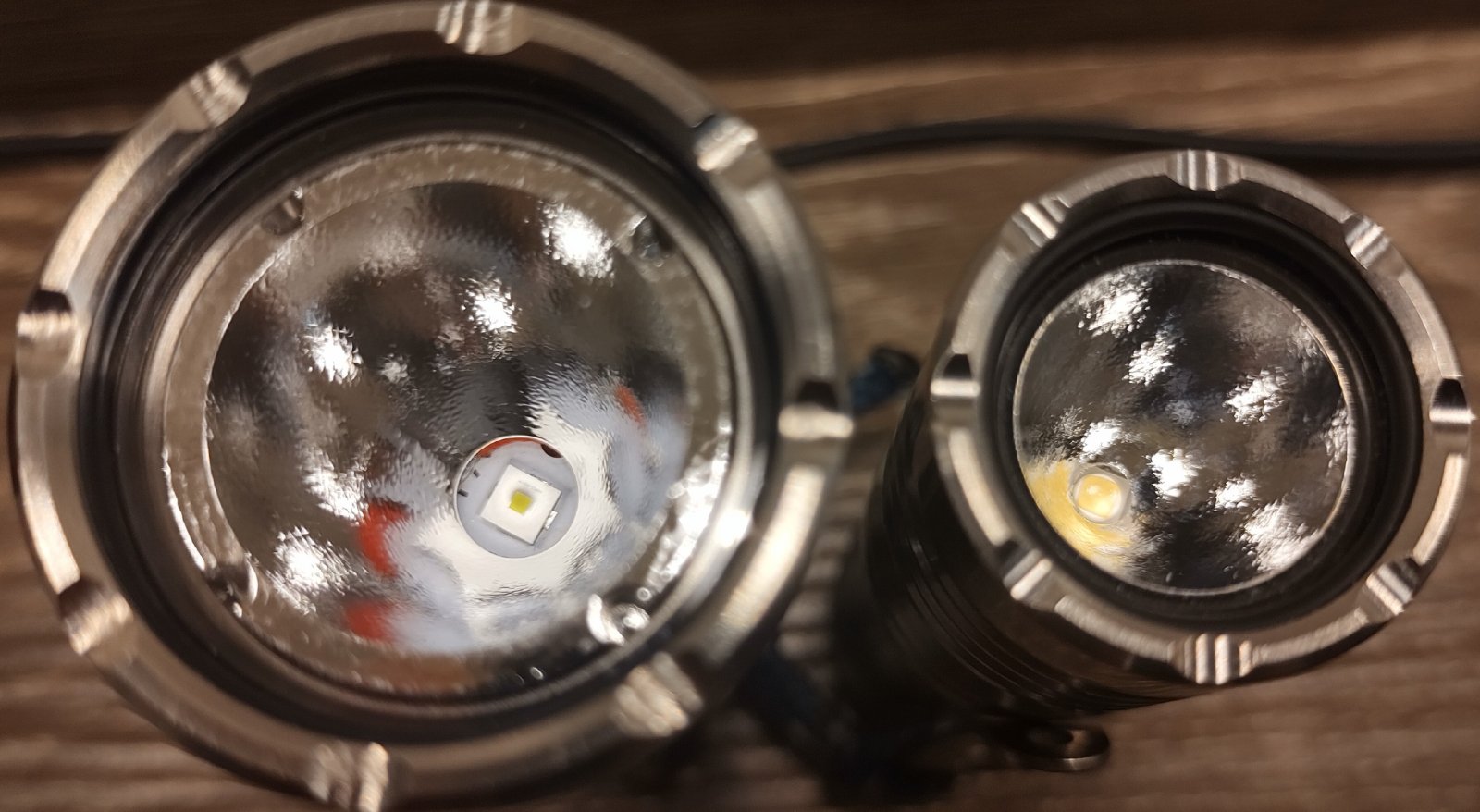 Here's a pretty ordinary photo taken with my phone of a Mahi with a 5000K Cree XP-P (much the same as the Osram Don offers) and a Haiku with a Nichia sw45k R9080 219B behind the original Mcr-17xp reflector with heavier texture OP.
Both MCPCB were modified from 20mm DTP copper stars.
I thought I'd post these to test the new forum format from my phone and also just to give the McGizmo pages a stir up.

(Note that the angle of the photo makes the LED centring look off; it's actually spot on when viewed directly.)
Last edited: Sep 29, 2021 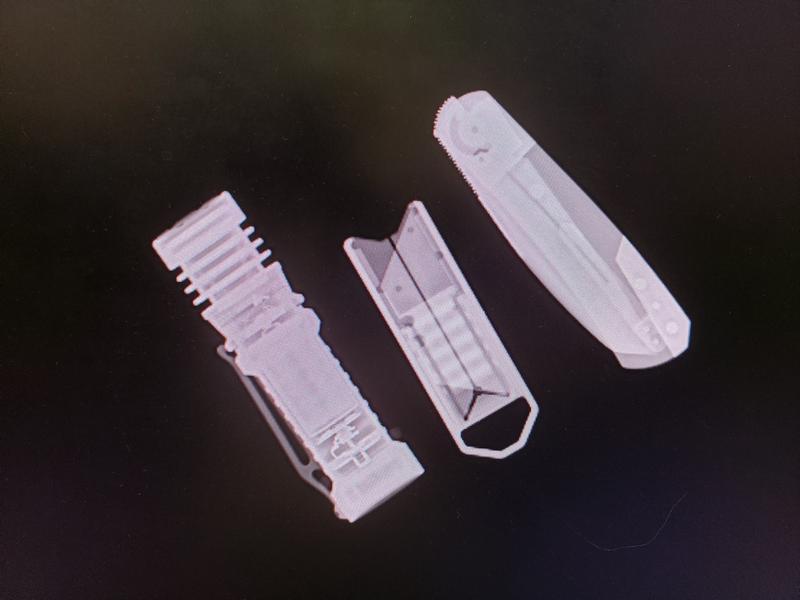 Tried this to see how the XRU goes with the tiny die. As suspected the result was really good, although I like seeing high CRI from a Sundrop.
I was thinking that a Nichia E21 (R9080) would be great (the die is twice the size of the XPP shown). 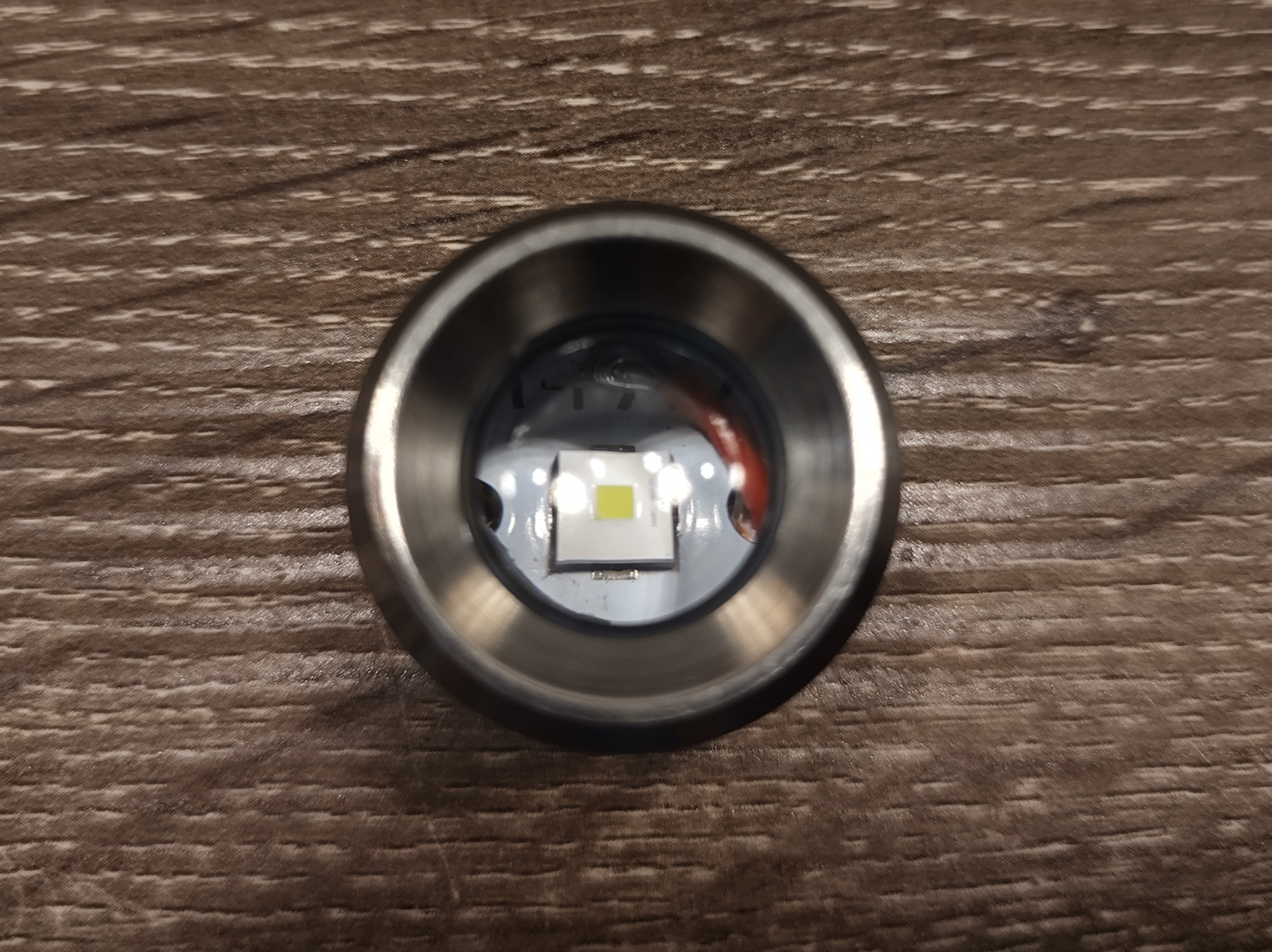 F89 said:
Tried this to see how the XRU goes with the tiny die. As suspected the result was really good, although I like seeing high CRI from a Sundrop.
I was thinking that a Nichia E21 (R9080) would be great (the die is twice the size of the XPP shown). View attachment 17699
Click to expand...

For a Sundrop, it makes sense to look for Seoul Sunlike diodes. I see that they exist at 3 volts, but are still weak in lumens, if only put 4 pieces next to each other. They have an extremely pleasant shade. I bought a lamp for the E27 base, the lamp is inexpensive, but they are installed there, it's just a joy for the eyes.

They look somewhat similar to Nichia Optisolis in form and function. Whether using the Seoul you mention or the Nichia, using four on a board would be a must I'd say (low max current).
I imagine they'd be very nice indeed.
I've considered (Optisolis) this before but never got there.
The E21A aren't new either but from what I've read have very pleasing tints and CRI, plus I'd like to just use one on a board (makes for a nice beam with one small domeless die in the Sundrop), also they can handle 1400mA (which is more than I need but not less).
Overall I'm not particularly looking for a heap of lumens though. My Sundrop is currently holding an AA converter (300mA high) with a 119V; so not that bright but I'm very happy with it.
That said, I need more LEs/converters to play with and I'm only interested in McGizmo ones due to their versatility of voltage in. I might have to get some Hive or look for some 3S.

I might go ahead and do this. I'm thinking sm573 (5700K), as much as I'm tempted to go warm, I always end up preferring a more neutral light source that renders white more closely to actual white for any reasonable observation.
Mixing, or even using four of the same on one board would be nice (for Mule or Sundrop) but it's enough of a faff as it is modifying boards for single LEDs to fit, so I think the sm573 will be the best overall compromise.
Looks like it should hit just below or very close to the BBL, I'm prone to a negative duv.
Last edited: Oct 2, 2021

I got some E21A in sm573 R9080 this afternoon. As usual I had to modify the MCPCB, which was a bit more of a faff than usual as I had to thin the board down as well as reduce its diameter and modify the shape, and excavate new pads for the power (as usual).

I generally use copper DTP boards but these LEDs need to be isolated so they're on aluminium boards that don't have a DTP. At the currents I'm using, this doesn't really matter anyway.
I didn't end up getting the board quite as thin as the McGizmo one but close enough.
The LED is mounted on an AA driver (in a Sundrop head).

I'm quite fond of the tint and CRI this combination is putting out; it's a really clean white and reproduces colours very nicely.
The beam still has the brighter outer circle with "tobacco ring" but it has an even roundness to its layers.

Anyway, I'm pretty happy with it over all. Here's another pretty ordinary pic taken with my phone.

Edit: Not being content with a few minor details; I disassembled the light engine and continued to modify the MCPCB. And of course, in the process managed to chip a corner off the tiny LED.
I decided to scrap the whole thing and start again. In the end I got the board pretty well the same thickness as the original. This is important (to me anyway) because I used a thermal adhesive pad (very thin, but adds to the thickness) to stick the board to the can rather than staking like Don does.
Anyway, I ended up with much the same result except that the Sundrop head now seats down that fraction of a millimetre or so that bothered me (no-one else would probably even notice). 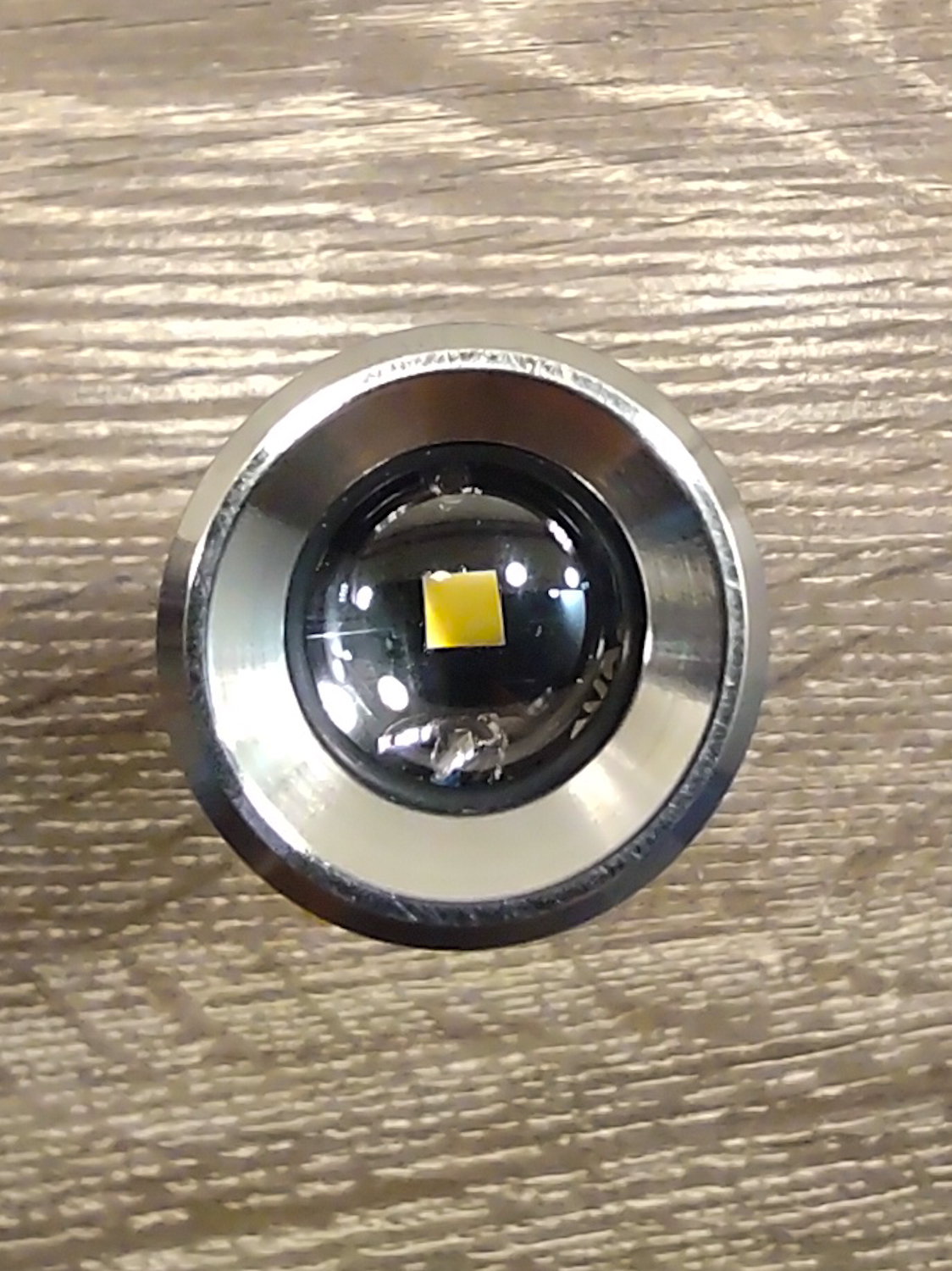 More fettling with the Mahi. I couldn't bond with the XPP as impressive as its output was.
Here's an XPE2 of around 4000K (5C1) with decent CRI (~80).
The XPE has transformed this light for me. Beautiful tint and rendering, still throws well but noticeably less than the XPP. Quality of light wins.
By the spec sheets I shouldn't like this LED as much as I do, but in reality it's my favourite outdoor tint/temp (great inside too) and generally up there with my various LED favorites.
I built a quad P60 some time ago with these LEDs and I like it more than the 219B sw45k quad that I built, so for me that's something.
I've been carrying the Mahi for general use quite a bit recently and I'm finally really starting to like it, in no small part of finding an LED combination that I'm really happy with. 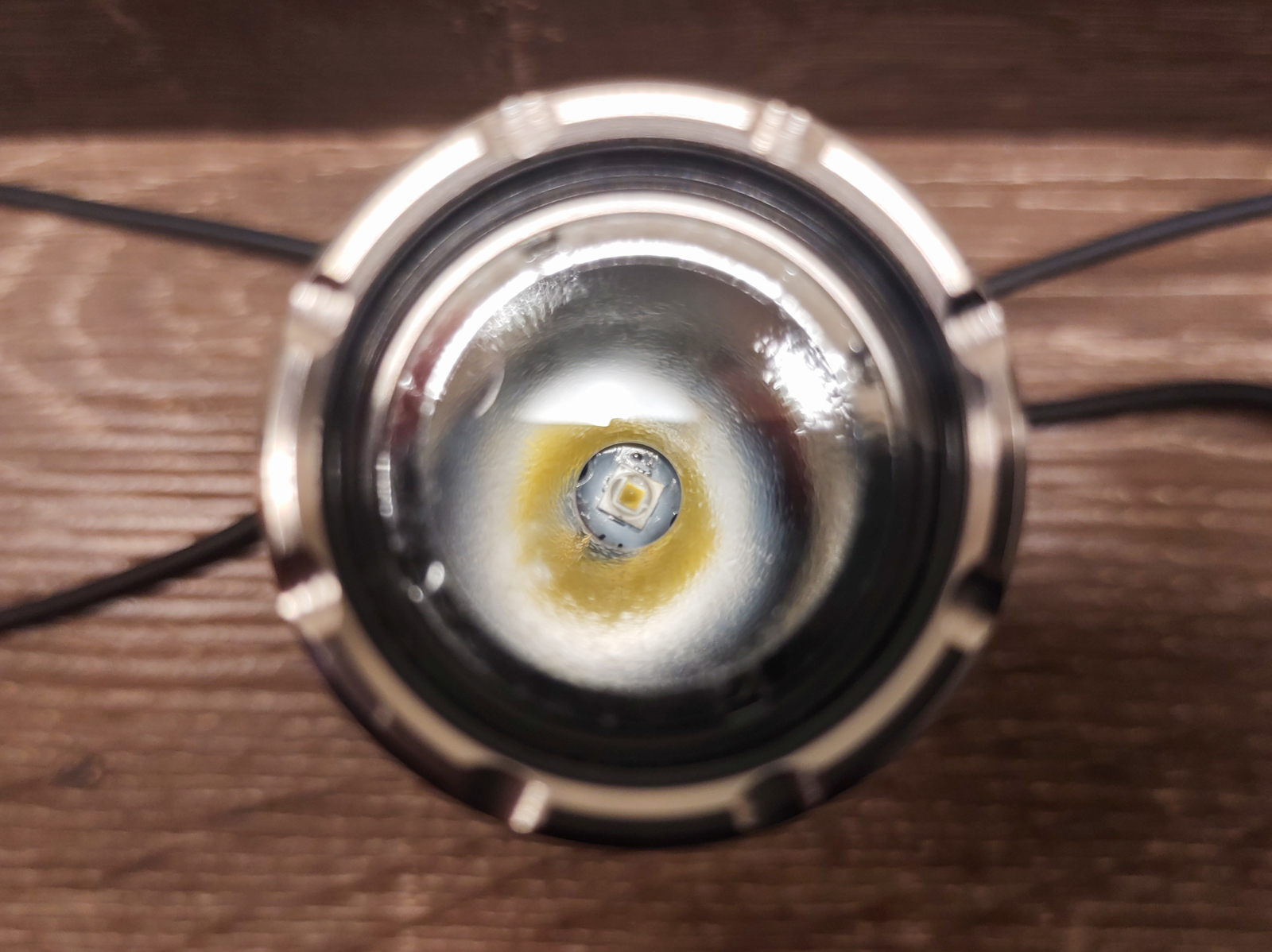 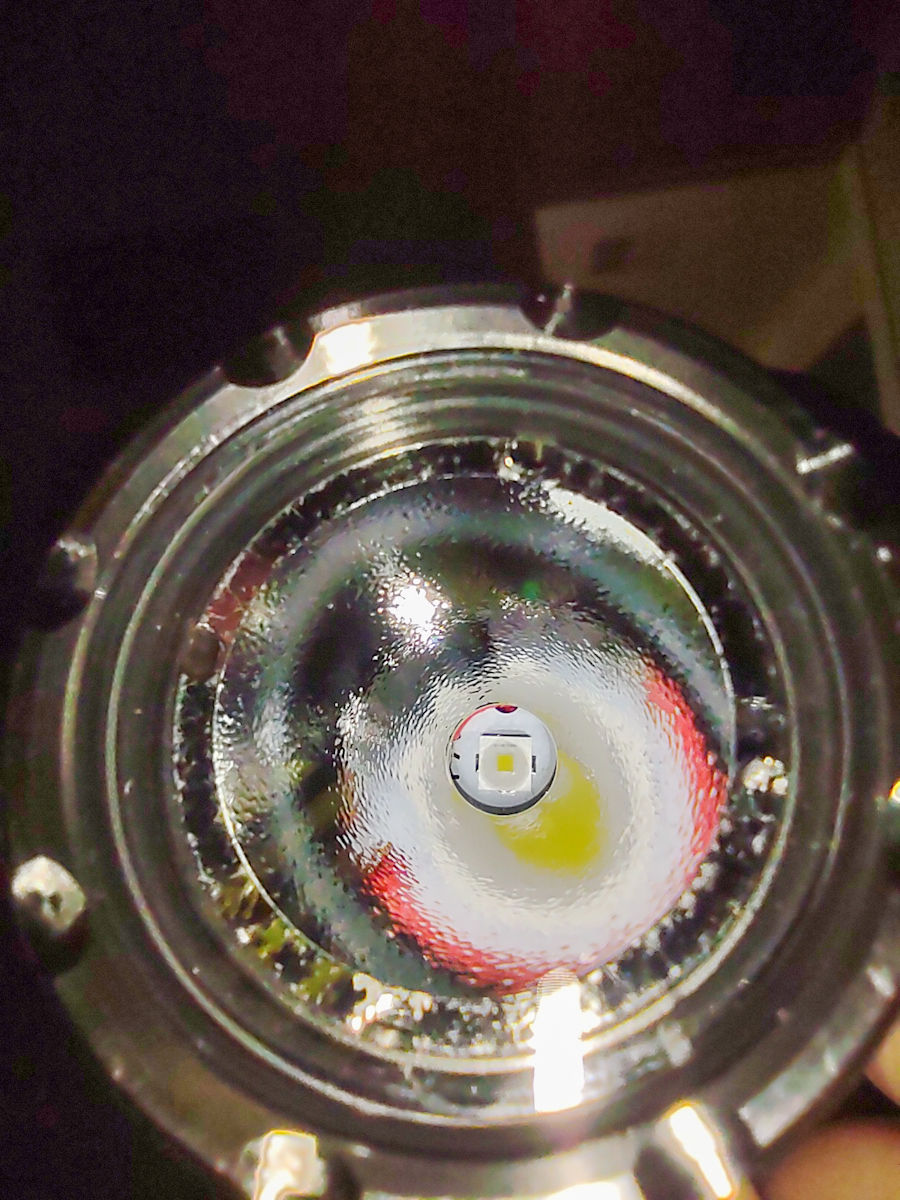 I built all of the Aleph style light engines myself. I chose a 7135+FET driver w/ 4000k Nichia 219C. I have one or two more ideas, but the collection is about complete.

Do you still have the original drivers (3S or Hive?), and are they undamaged?
J

Do you still have the original drivers (3S or Hive?), and are they undamaged?
Click to expand...

I think I am going to need another 1x123 clicky pak, and I’m probably going to get another engine from Don. Tossing around getting a 1.5V 119V for my Mule, but I do love the HIVE.

I need a Haiku in my life again....The fact that you matched it with a SlideClick makes me even more tempted. 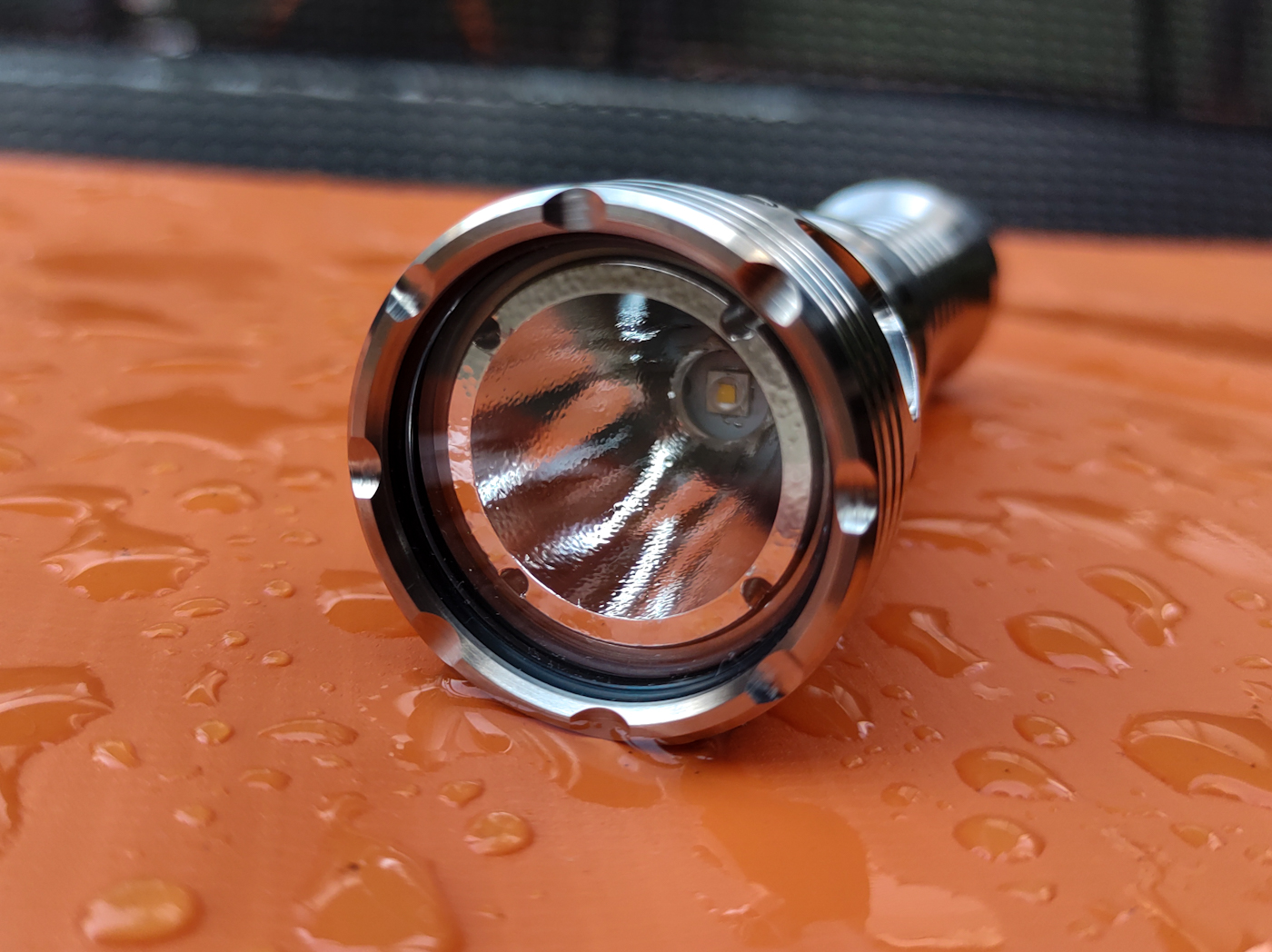 Gizmo makes one hell of a light