1. always stay plugged into a typical USA house wall outlet
2. turn on only when the power fails to the outlet
3. are as bright as possible for a power-outage scenario lasting 1 hour

Your thoughtful suggestions are appreciated.

These are overkill for your requirement (they offer several hours of runtime) but these have been the most successful for me - with a half dozen installed at friends & family over the years:

Battery-powered emergency backup lighting. Leave them plugged in, and the lights come on when the power goes out

I bought them via Amazon in Canada but apparently Amazon in the US does not offer them.

Oddly enough I had problems with a 2-head version I purchased, since AFAICS the electronics are pretty much the same.

For something smaller (eg plugged into a bathroom outlet) I had pretty good luck with a Lee Valley light that looked a lot like this:

Much less light but fine for a small room, and easy to pick up & use as a flashlight.

EDIT - it's probably obvious, but one of the reasons I favor the first light for friends and family is that they probably do *not* have a bunch of flashlights sitting around in known working order, and there's a good chance that this will end up being their primary light source in an extended blackout. I encourage friends/family to also have a couple of outdoor solar lights that can be easily brought in at night as a source of at least getting-around-the-house light in case power stays out for longer (my power was out for a couple of weeks recently).

For most of the people on this forum, however, I imagine a power outage might be met with a bit more enthusiasm, and the primary requirement for a power failure light is to help you navigate safely to at least one flashlight. Sort of like when you hear a warning that roads are bad and everyone needs to stay off them... and you think "woo hoo !" and go looking for the Jeep keys.

Still, it would be nice to have a flashlight with enough reserve power to run my well pump.
Last edited: Aug 4, 2022

It can provide for some amusing moments. Hold the bulb in your hand, squeeze your palm against the contacts and it lights up. "Hey, need a light?"

It can provide for some amusing moments. Hold the bulb in your hand, squeeze your palm against the contacts and it lights up. "Hey, need a light?"
Click to expand...

These are great! Got about 10 in my house. The power goes out you can’t even tell😂😂

I have had different styles, and they all worked similarly. Not particularly high out put but they'll last for a couple of hours. They come on when the power goes out, and throw enough light for one to navigate a room without tripping on stuff, or without smacking your shin on the coffee table.

They also keep the house from going into sudden cave like darkness which can scare the ****ens out of a young child. This one has an electric eye, and won't come on when there is enough light in the room. It thereby conserves its energy.

When strategically placed, one can light a couple of rooms. I found that plugging one into a extension cord, and plugging into the outlet for the refrigerator works and placing it on top of the refrigerator. That is often a good central location.

Some have an electric eye, some don't, some serve as an always ON night-light.

Overall, they can be had for about $10 each at the Home Depot, or Walmart, or Amazon.

Here is a picture of another one I have at home.
It doesn't have an electric eye, and it is on all the time. It acts as a night light.
This style can be set to light up the three LEDs in the front, or the two or three on the top, so that when the power goes out, it will shine out from the front, or ceiling bounce from the top. This gives an option of hiding it behind the couch. IMO it is not quite as good as straight out the front, but still better than nothing.

If your SO doesn't like it's appearance, then hiding it may be the way to go. 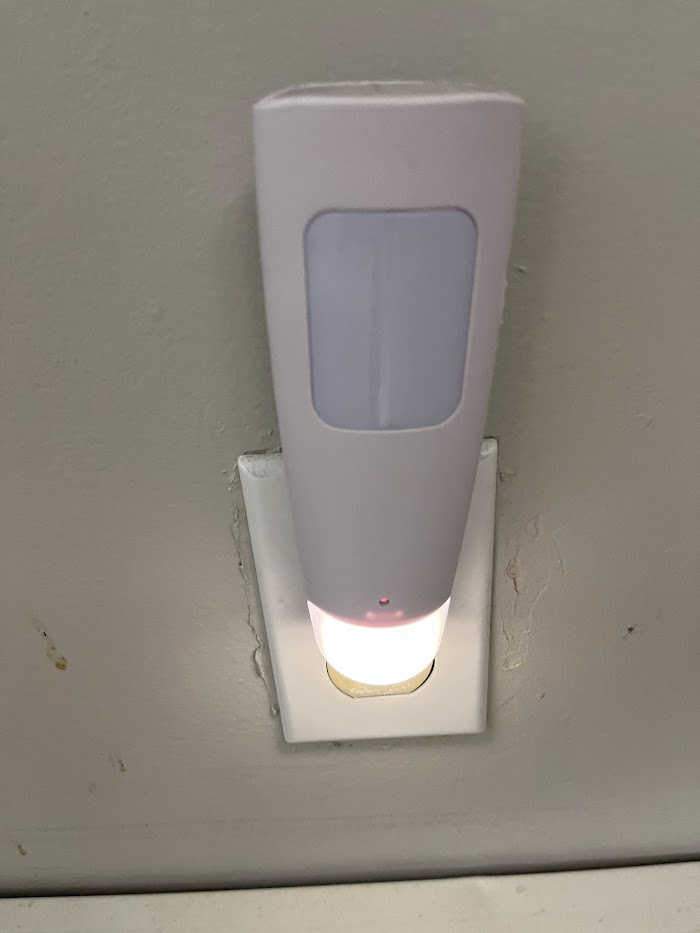 www.aidsquilt.org
We use # 5 in our house
K

Some years back I bought a bunch of motion-sensing battery-operated lights from the big-box Swedish furniture store; they were being cleared out at a couple of bucks each. On our rare power outages, they can be useful, since they can be quickly unsnapped from the closet mount and carried about where needed. I can even leave one as a night light in a bathroom or other area. Wish these ran on AAs, not AAAs, but on the same visit I also picked up an armload of rechargeable AAA batteries and so I always have spares when needed. They shut down after a minute or so with no activity, so not good for sustained light. But very handy in the first 15 minutes of an outage while you gather more sustained lights.

Nothing fancy. But the Energizer weatheready 5-inch LED compact light is a good one.

As a residential electrician I can say it blew my mind when I was trouble shooting power loss on a circuit within a room, and saw a lamp on, then unplugged the lamp and it was still on.

I was 98% sure they needed a priest and not an electrician.

FriedTubes said:
As a residential electrician I can say it blew my mind when I was trouble shooting power loss on a circuit within a room, and saw a lamp on, then unplugged the lamp and it was still on.

I was 98% sure they needed a priest and not an electrician.

It was One of those battery powered emergency bulbs screwed into a standard table lamp
Click to expand...

That would've freaked me out also, or I would have seriously questioned my sanity. I have a couple of those bulbs now.

That would've freaked me out also, or I would have seriously questioned my sanity. I have a couple of those bulbs now.
Click to expand...

Power outage must have lights
2