Yes, beautiful. And I think I know someone who has one (not me) ...

Any possibility of getting one made of silver?

andrewmac said:
Any possibility of getting one made of silver?
Click to expand...

Great, I'll see if I can source a rod of silver then.

andrewmac said:
Great, I'll see if I can source a rod of silver then.
Click to expand...

Send me an email and let's work out the details before you buy anything. I need to get my machine up and running first..

Silver might be a better option for the Okluma AAA (OkAAAluma)

About 400-ish material cost (minus any swarf recovery) ... did I do the math correctly ?

Sorry to hear about the lathe, hope the parts arrive soon.

Silver would be awesome, but I have yet to find a rod bigger than 1/2". Still probably be cheaper than Mokume gane though if fit can be found.

Thetasigma said:
Sorry to hear about the lathe, hope the parts arrive soon.
Click to expand...

Thanks. It's just part of manufacturing.
A

Ok, I will. Thanks

okluma said:
Send me an email and let's work out the details before you buy anything. I need to get my machine up and running first..
Click to expand...

* new clips - I've been doing work with a particular waterjet guy for about 5 years now. He's a nice guy and can usually get my work done the same day. However, for some reason he's had a lot of trouble keeping the tolerances I need for my clips. Over the past couple weeks, I found a new shop that does great work. Their turn around time is about 2 weeks instead of same day, but their quality is worth it. All their work is crisp and clean. Here's a picture of one before it's been bent up. 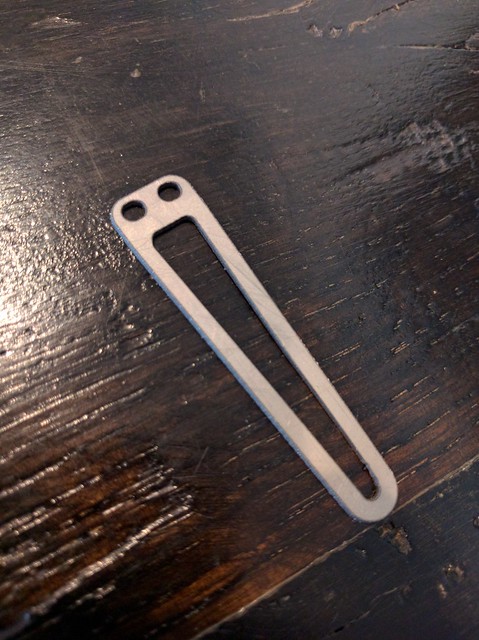 I was just curious how much the Damascus units sold for (for those who were able to purchase them).... Thanks...

Over the last few weeks, my lathe was having increasing trouble changing tools. It would frequently skip past the tool I had selected and throw an alarm message about having the wrong tool. I called the local machine repair company who came out and took a look at my machine. They came out, fiddled around some, and diagnosed my problem as a bad optical encoder on my turret. When I asked them for details on why they thought this was the issue, the guy just said to order the part and told me I wouldn't understand. I didn't protest and set about finding trying to find a good price on a new optical encoder. A new encoder from the machine repair company was $1200, from the US distributor it was $600, and from a very sketchy looking website I found it for $430. The sketchy website also said I'd have my part in 4 days despite shipping from Hong Kong. The other two options said it would be 2 to 4 weeks, which I didn't think was acceptable. I ordered the optical encoder from the sketchy website and paid with paypal.

Last Friday around noon my new encoder arrived. It had been 4 days after I had placed my order just like they said. I replaced the encoder and very nervously started checked to see if the issue had been resolved. It had not. The very first tool change gave an error. A bit discouraged, I started looking for other possibilities. I called the local machine repair company. They were busy and I was promised a call from their technician as soon as he was available. Prior to having them out to look at my machine I had posted a thread on practicalmachinist.com describing my issue. I checked it and found that a Doosan employee had posted on my thread saying that support phone calls were free, and I should give them a call. My lathe was manufactured by Daewoo and Doosan had purchased Daewoo in 2004. I did not expect much in the way of support given that Daewoo no longer exists, my lathe is 16 years old, I am not the original owner, and it was close to the end of the day on a Friday afternoon.

Never the less I called. A human picked up on the second ring, and I was immediately transfered to technical support. Another human picked up right away and asked for the make, model, and issue I was having. We went over a few more basic things, controller version, software version etc.. He said he needed to find the schematics for my lathe and he would call me back. In less than 5 minutes he called back and we began troubleshooting the issue. We watched bits change on the controller, checked voltages, and operated relays. He patiently answered all my questions even though they were mostly irrelevant. 30 or 40 minutes into the phone call, he asked if I had all my tools on one side. I didn't have all my tools on one side, but I did have all my ID tool blocks on one side. They're pretty big and heavy compared to the rest of the tools. I took the tool blocks off and distributed them evenly around the turret and I was unable to duplicate the error. I've made approximately 100 or so tool changes since then and I have yet to encounter the error.

The moral of the story? If you're looking for a cnc machine I'd recommend Doosan. Not only with my lathe hold tenths all day long, I've never had such good customer support from any industry.

Edit: While I was typing this up the technician from the local repair company called. I explained what happened and he was very apologetic. He's offered to come back out on his own time and fix a few other small issues.

Wow! Great support! So rare these days. Glad it worked out.

That's a good read. Full of life's lessons. Thanks for sharing!

M
Any news on Dc2