April's batch, which actually showed up in June sold quickly as most of you know. I've started progress on the next batch would should be ready in late August some time.

The Oklahoma secretary of state just reminded me that we're coming up on one year since Okluma was incorporated. I'm pretty excited about this, but it's also a little discouraging in that a lot of you haven't had the opportunity to purchase a flashlight from me. That's going to change with this next batch. Primarily it will be aluminum flashlights. I will be making a handful of copper lights and selling them at the drop like normal, but I may also do a few flash sales here on CPF and over on Instagram.

Last week while I was cleaning up the shop (which takes more time than you'd think), I thought it'd be fun to make a little Okluma paraphernalia which some of you have asked about. I'm calling these Okluma Ti coins. They're about the size of a half dollar, cut from 1/8" thick titanium, and heavily stone washed. They're up for sale on my site here: http://okluma.com/products/okluma-ti-coin. 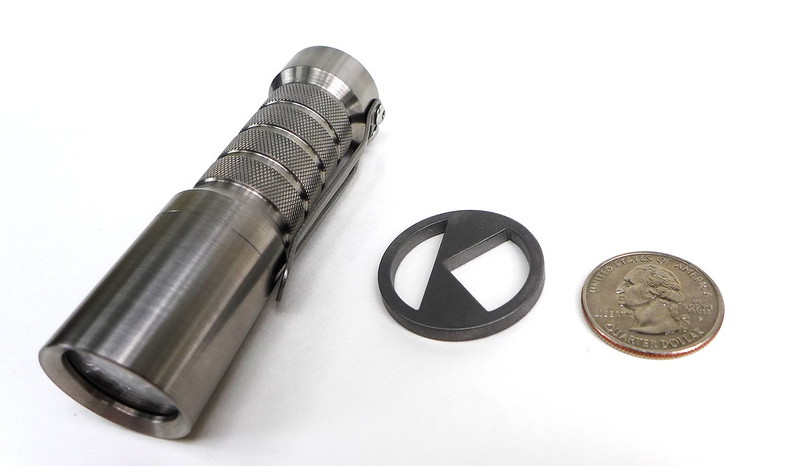 Aluminum run!? I'm in on one for sure

Congrats on a successful year! A commemorative coin only seems appropriate.....

Yes, I am in for a Aluminum light. I want to try one out.
I missed out on the last batch due to having to fund other "hobbies". The door fell off my clothes washer! It was 10 years old. I have fixed it a half dozen times. It finally gave up the ghost about time you did your drop! lol But now, I am ready and wearing clean underwear! Oh I did a top load washer this time & a new dryer!
I signed up to the email list this time. I assume you send out a announcement?
M

I've missed out on all the batches so far, but I'm a patient man! Looking forward to the chance for an aluminum, for sure!
T

Look forward to it!

I've read that this batch will be aluminum but wondering if you'll have the wooden boxes available? If I get one, it will be a wedding present and the box would be a nice touch.

Is there a big difference with the copper pill upgrade?

Which lens is better for edc- used but taken care of?

tech25 said:
Is there a big difference with the copper pill upgrade?

Which lens is better for edc- used but taken care of?
Click to expand...

Copper weighs much more than aluminum but is able to absorb more heat. So your emitters stay cooler for a longer period of time.
Sapphire lens is able to withstand small scratches better but not shatter proof. It will still crack if u drop it hard enough...

Thanks, so the copper is more for the longevity of the LEDs or for actual performance?
If it's a trade off of weight vs. longevity- for me that's not as important, but if it's weight vs. performance that will make a diff.

Got my TinyDC today, safe and sound. Love the new clip!

It feels about one pound lighter than the brass model, so I am really enjoying that.

Jeff thanks again for everything!

I'm loving the aluminum TinyDC, great beautiful design in a light weight package. Something you don't get with the other metals. I have other lights but this one has been in my pocket 5/7 days a week due to weight

+1 to everything Luckyonion said ^^^. We all have lots of choices but this is the light I reach for everyday. The TinyDC is literally perfect.

I bought mine used so I don't expect an invite to Jeff's appreciation banquet but y'all will def see me at the after party! :bump:

Anyone know if there's a video review on the TinyDC ? Or whether Jeff has any plans to build more or possibly a new creation? This light feels so good in my hand I can't put it down. I discharged two 700mAh and one 800mAh cells last night alone... and that's despite me receiving a new awesome light in the mail yesterday.

Hey, I haven't seen any video reviews of Okluma. But I probably haven't looked since August. Next batch I hear will be more Ti, with scatterings of brass, aluminum and copper. (Someone can correct me if I'm wrong). Also he migh do some lottos in the mean time.

Sounds nice! Yeah I've searched and haven't found any reviews... was hoping to hear someone brag about it like I do. Lottos... as in a lottery?

Yeah. Would be nice. I love this light. On instagram he said he finished a few copper and brass and was thinking about doing lottery to purchase rather than who can hit a button faster

Oh wow, so Jeff has more customers waiting to buy than he can accommodate. I read somewhere that he sold out a batch in something like seven minutes. That's nuts, if true.