Long time reader, but first time poster of these forums. I have learnt a lot reading the wealth of info on here, and managed to save a number of failed lights over the years, however my latest loss has me a bit stumped.

Just as a bit of background on my electrical ability, I am an ex vehicle mechanic and have wired race cars from scratch, so I am fairly able when it comes to 12v systems. I have not had much to do with circuit boards, other then the odd DIY repair of audio amplifiers or modification of vehicle dash circuits etc. I have had zero experience building LED components from scratch, but believe with a bit of guidance I could learn.

I have a 5000Lm video light that was made by (I believe) an Australian guy that went under the name HDVSeaTek. This light was amazing and outperformed a number of much higher rated lights my dive buddies have used.

Unfortunately it looks like this company has stopped trading, so I cant go directly to them for help, hence this post.

So I believe the light has turned on in my dive bag after a dive one day (yes I know.....should have taken the batteries out), and subsequently overheated. It would have been on for a number of hours as I hadn't used it much on the dive, and it had a full charge.

I have pulled the light apart and done a number of tests with a multi meter. It looks to be functioning as expected, all the way up to the power input in the LED PCB/LED's themselves. I have 4.7v at the positive/negative inputs in the LED board, but am only getting a faint glow out of the LED's. I am also seeing the voltage move up and down as expected when controlling the dimmer, so that leads me to believe the supply circuit and driver are all ok, and the LED's themselves have failed (The batteries themselves are giving me 4.97V we measured together and 2.7v/2.28v individually so these may be poked as well?).

Does this sound accurate, or do I need to be looking for more then just battery voltage at the LED board?

If the above fault finding does sound correct, and the LED board is at fault, what are my options here? Is it possible to buy a pre made LED board to replace this one, or would this have been a custom board/LED selection, and if so, where do I begin to start fabricating a replacement?

Some tech details on the light:
Output as advertised: 5000Lm
Batteries: 2x 32650 5500mAh 3.7V Li-ion
Driver PCB has LG-70 printed on it (cant find anything on Google for this however)
Mag dimmer switch PCB has LG-69 printed on it
LED PBC - 6x square LED's mounted on Aluminum plate PCB - nothing printed on the board
Housing - looks to be custom made 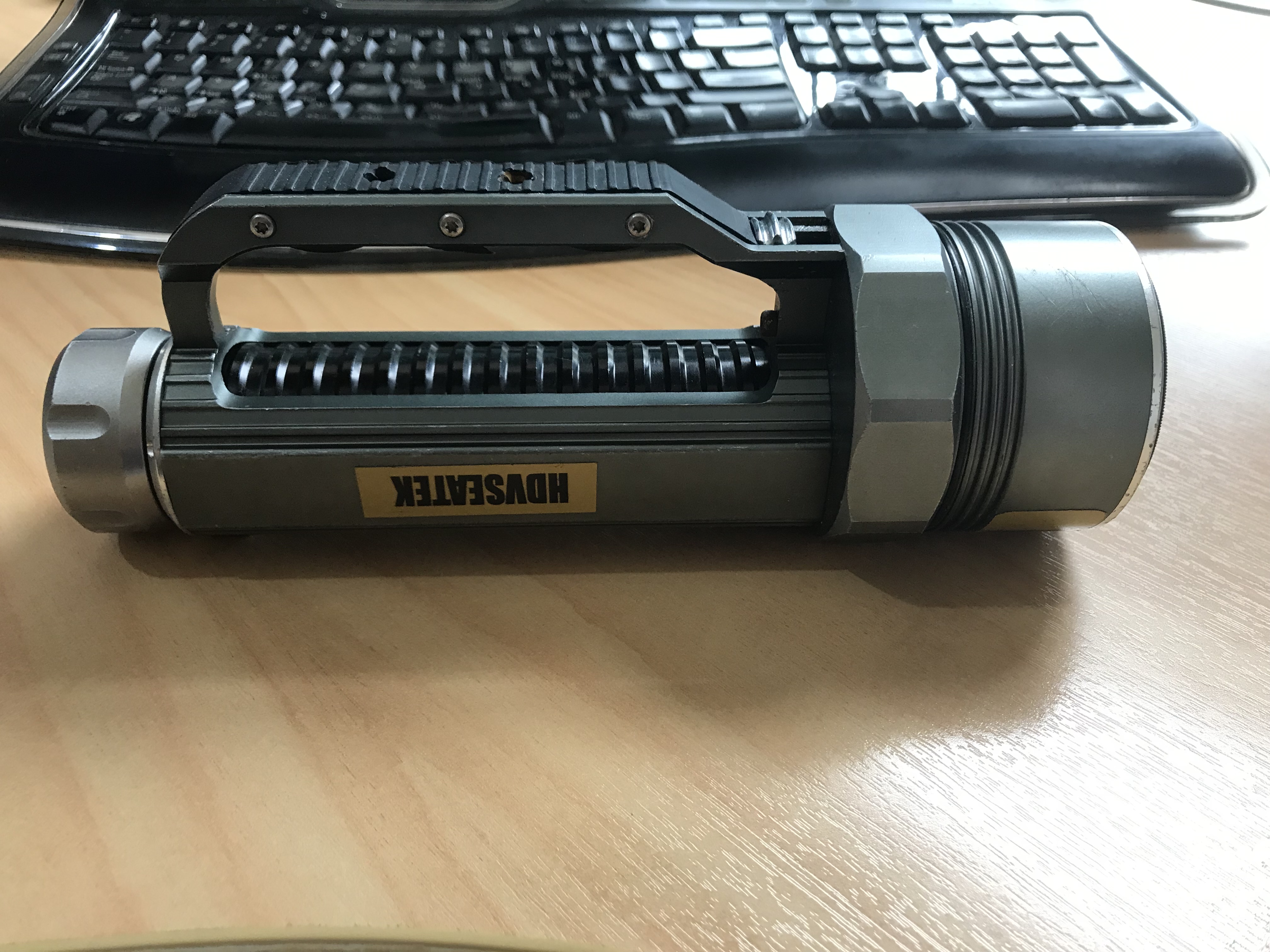 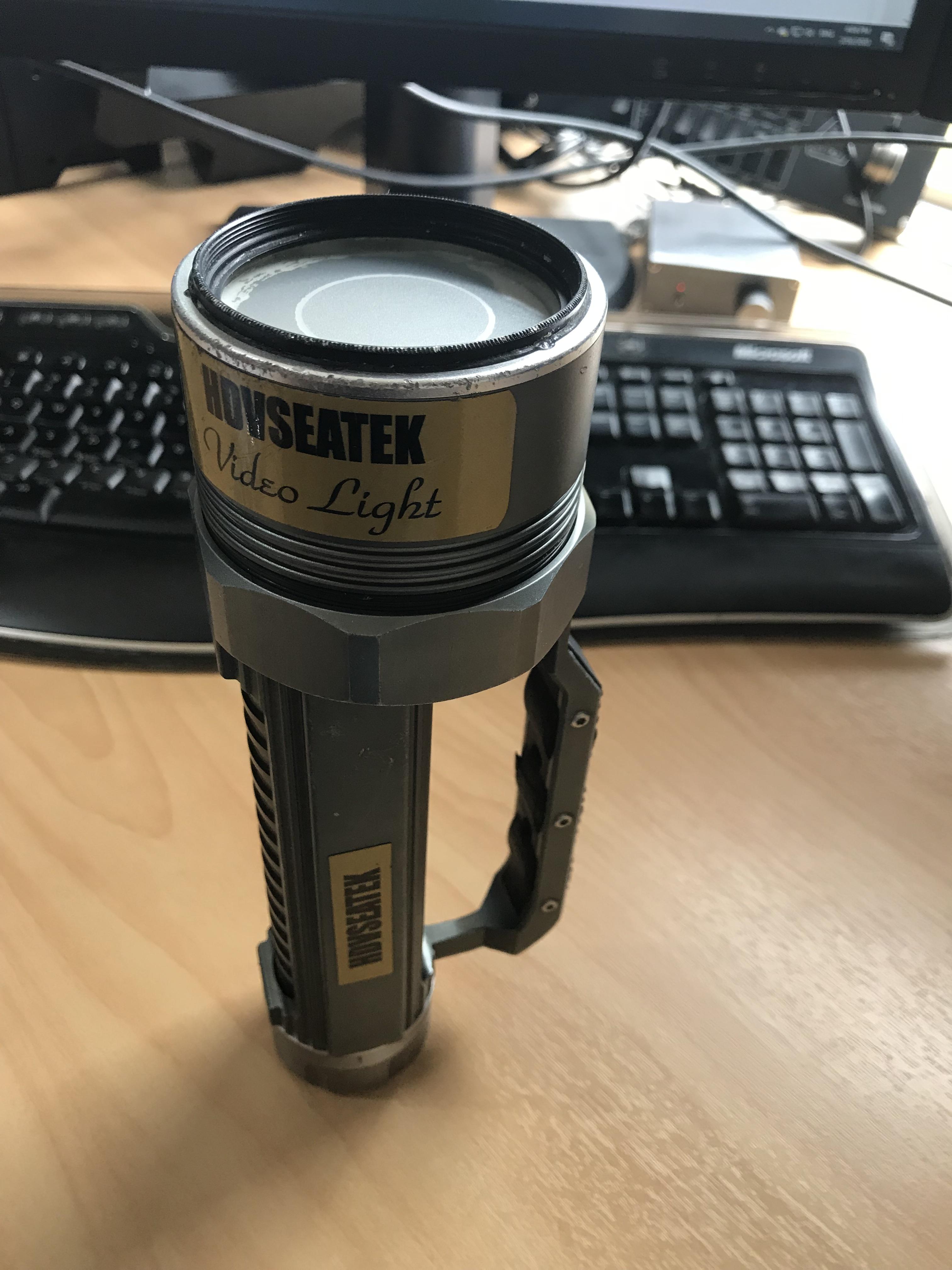 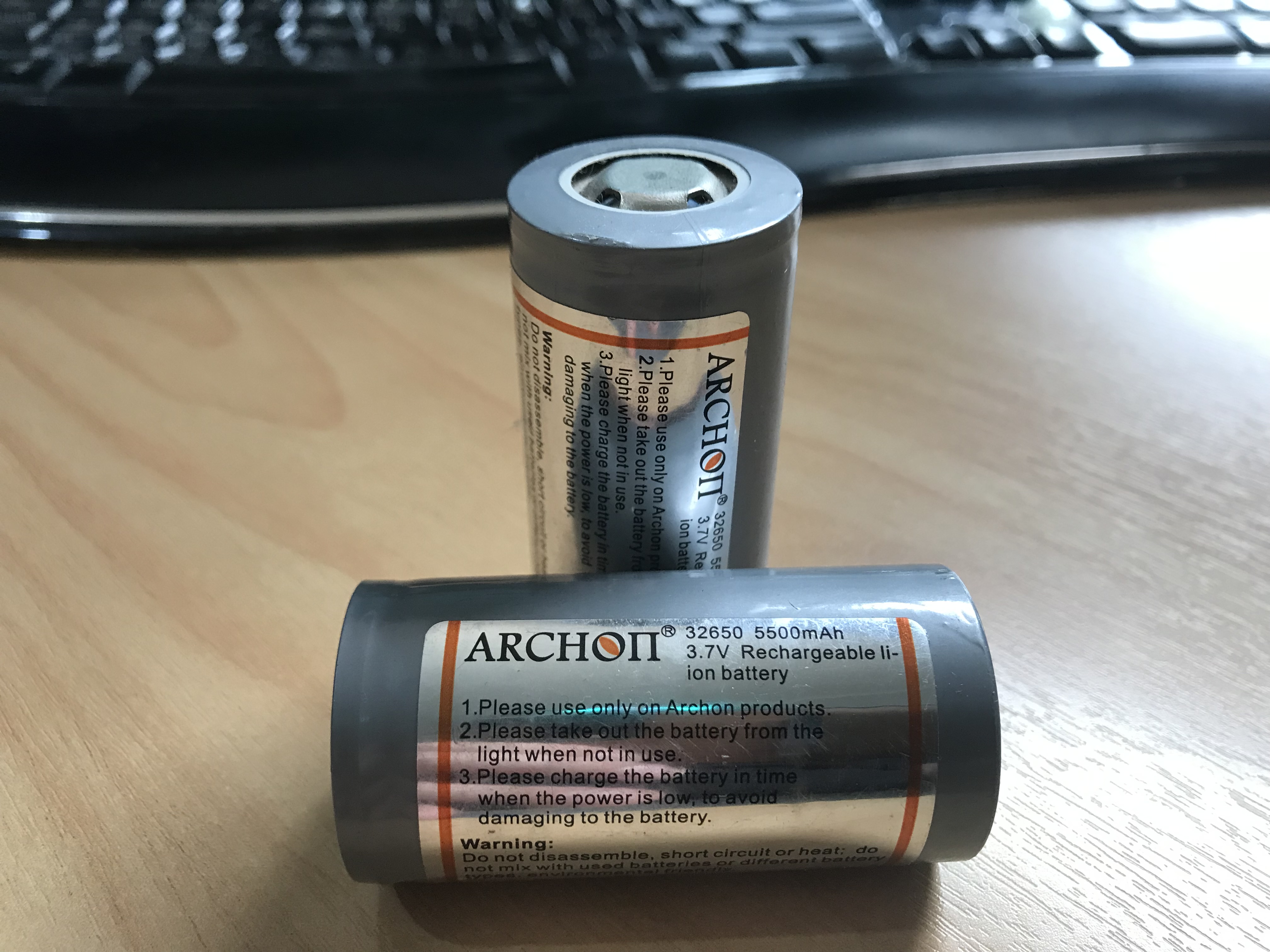 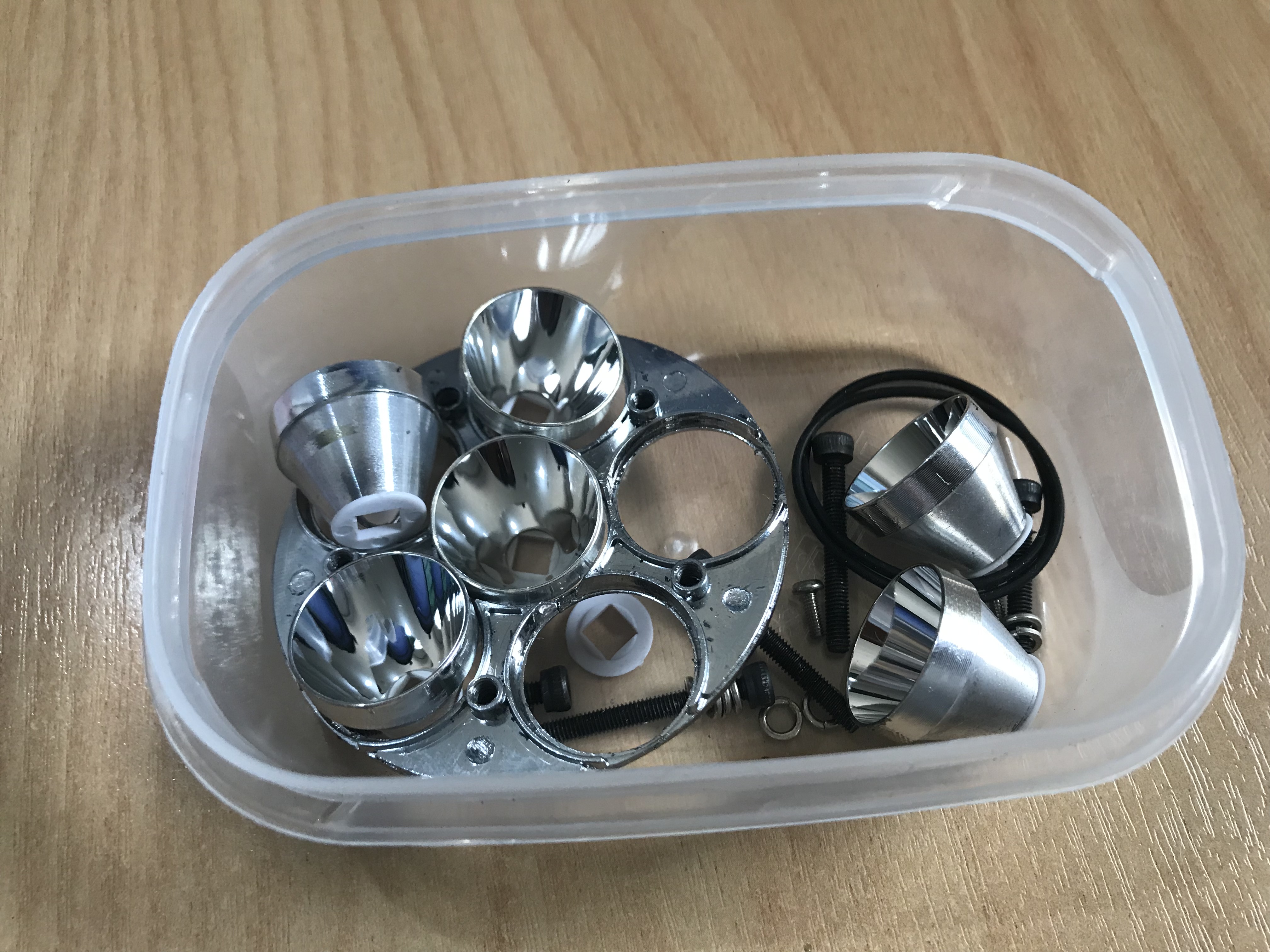 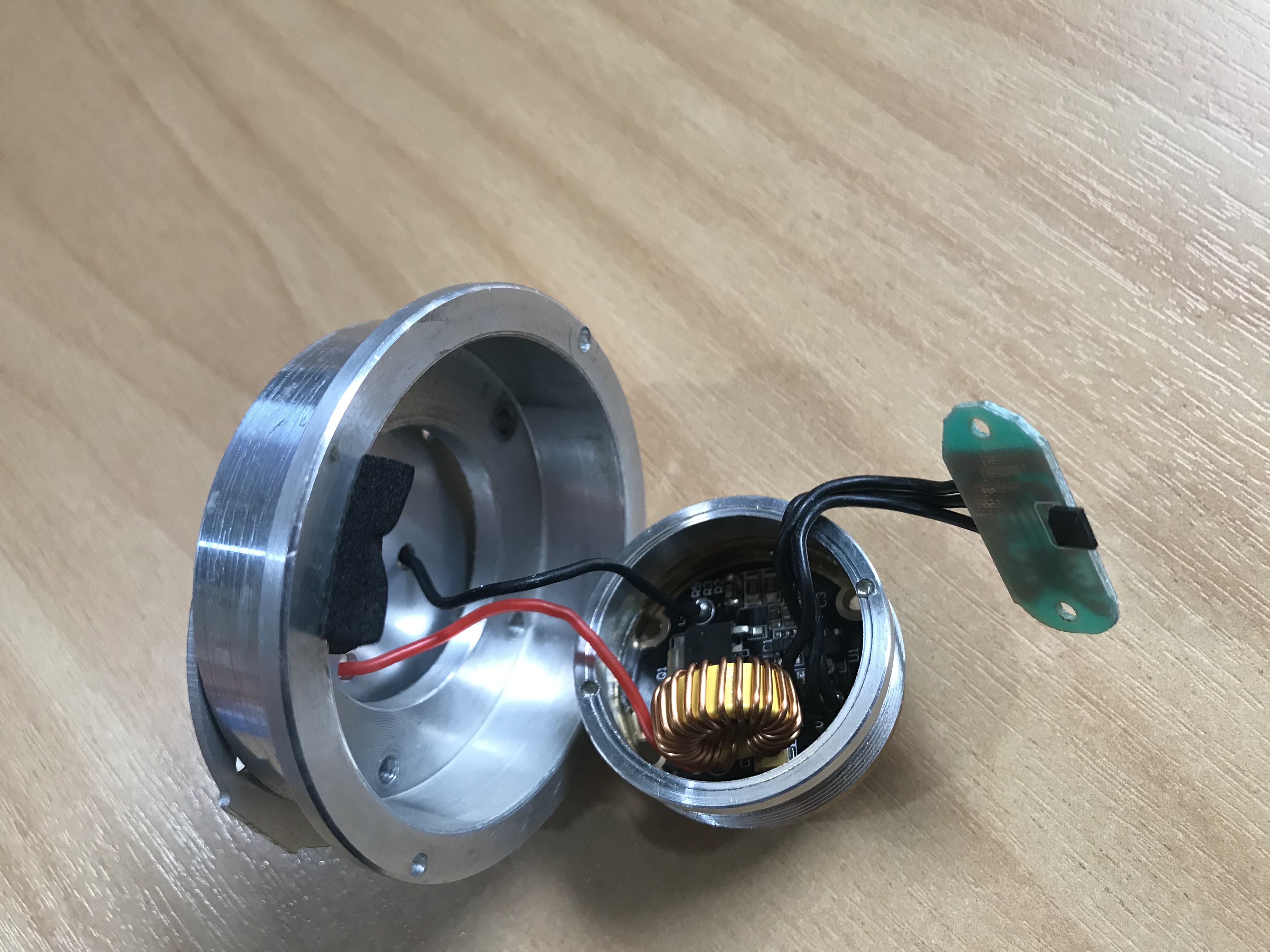 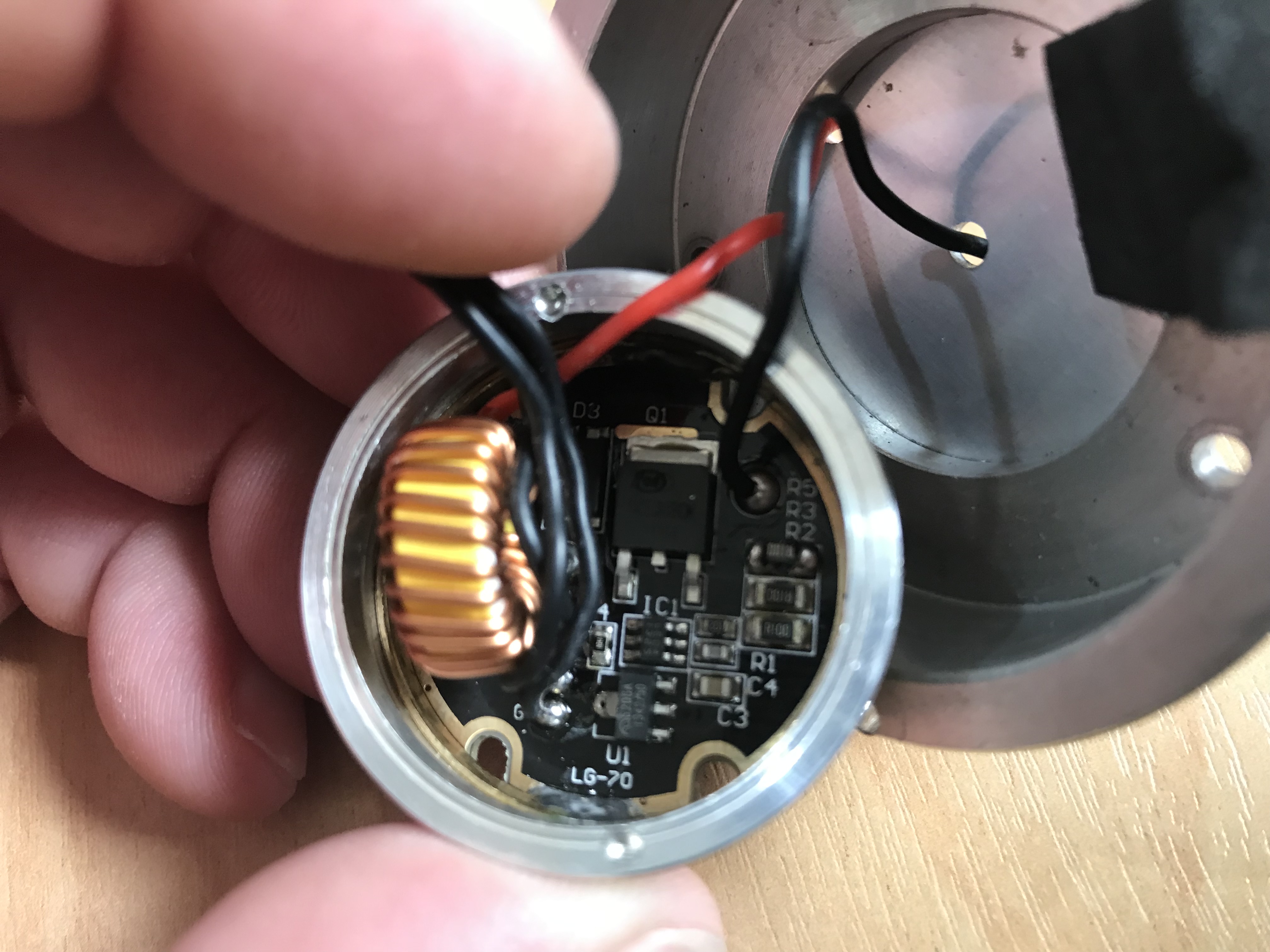 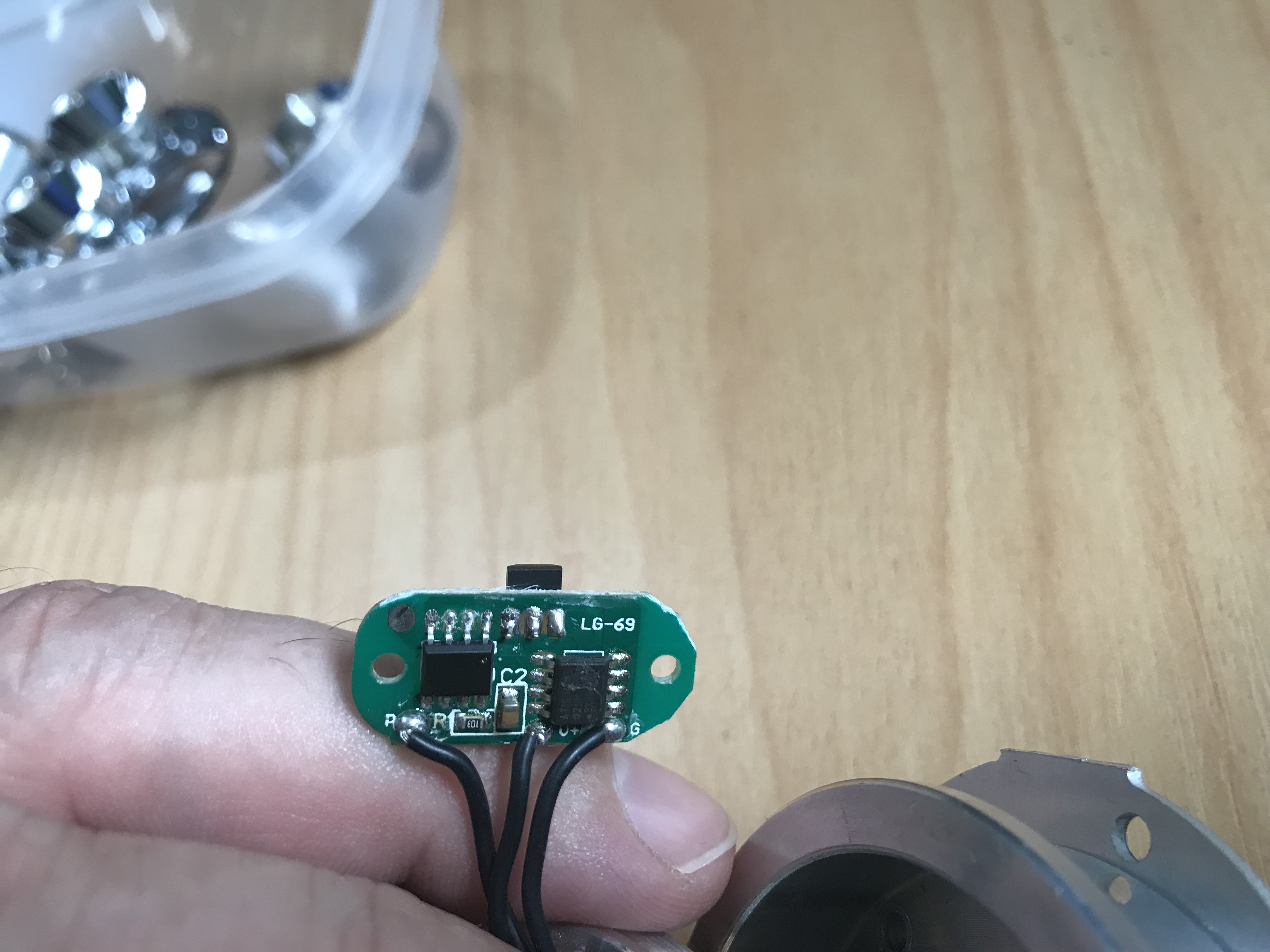 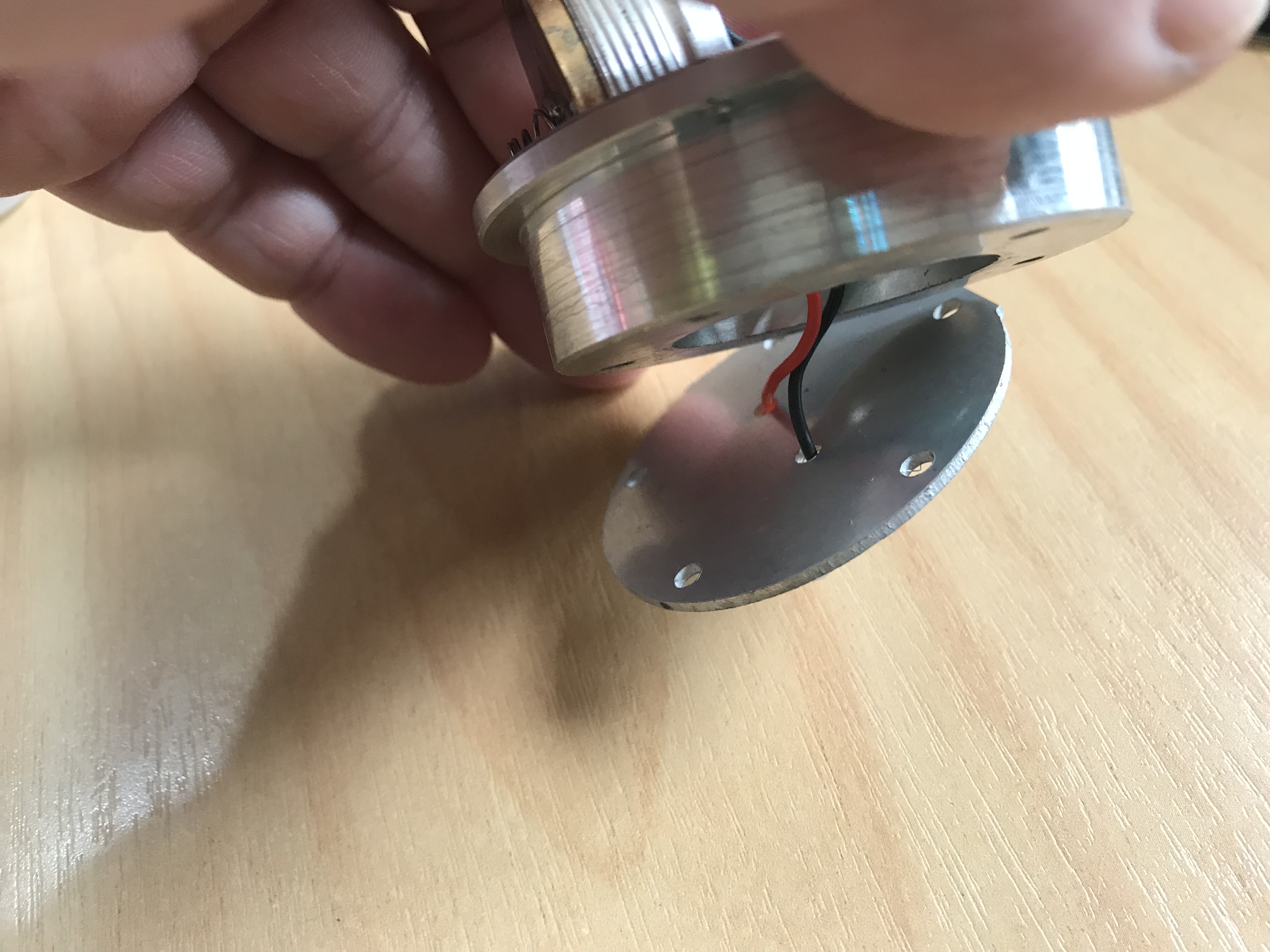 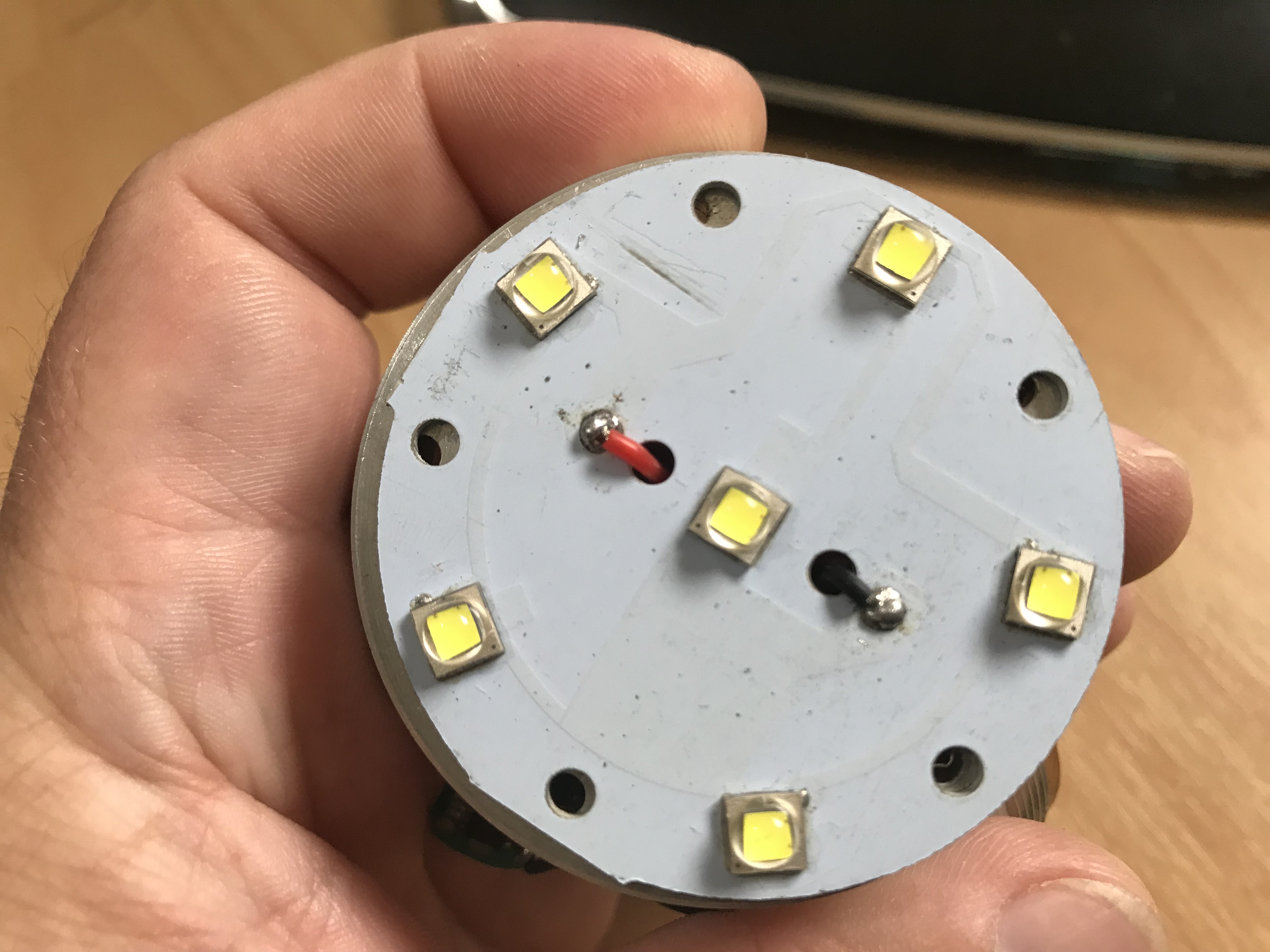 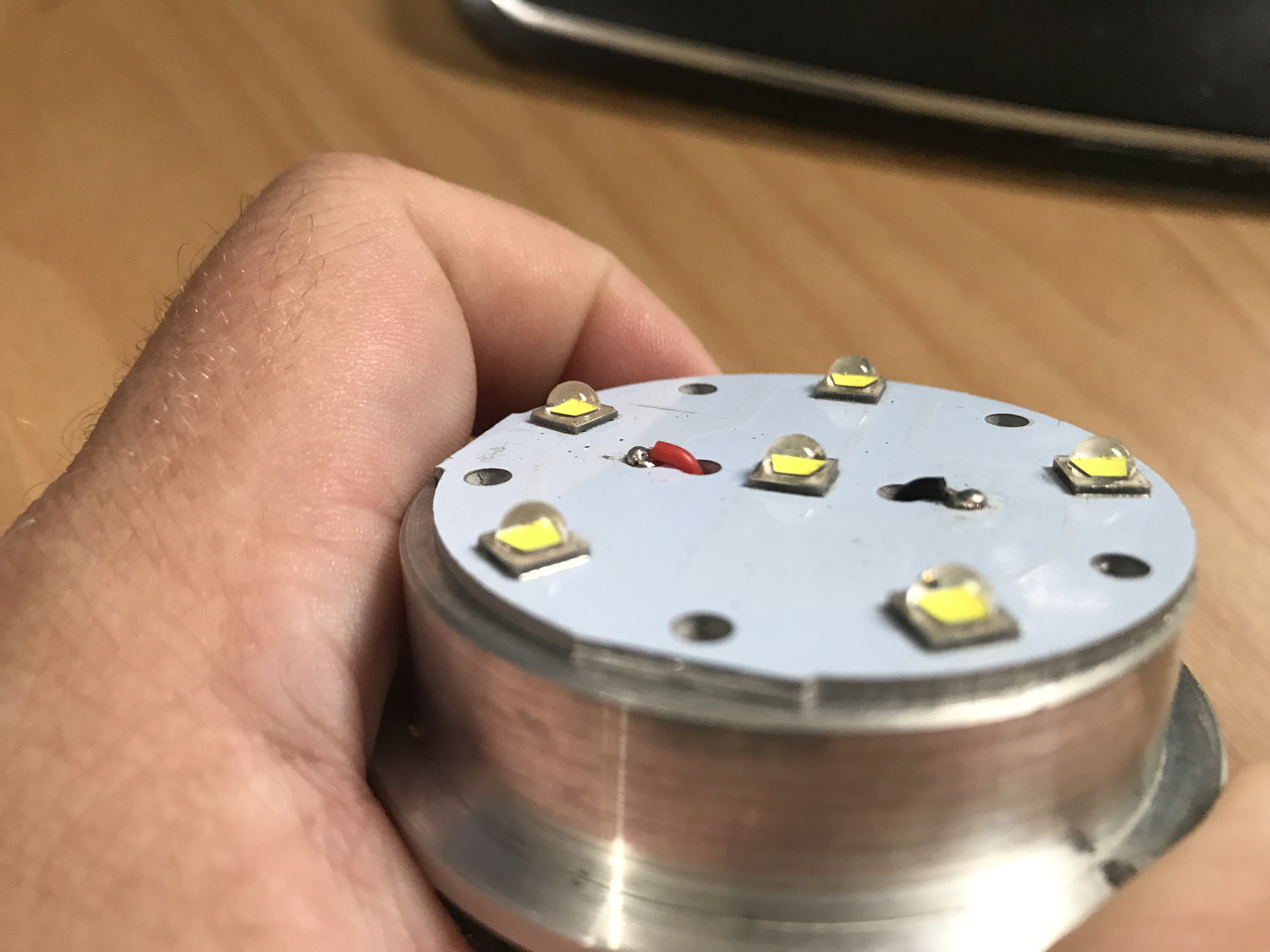 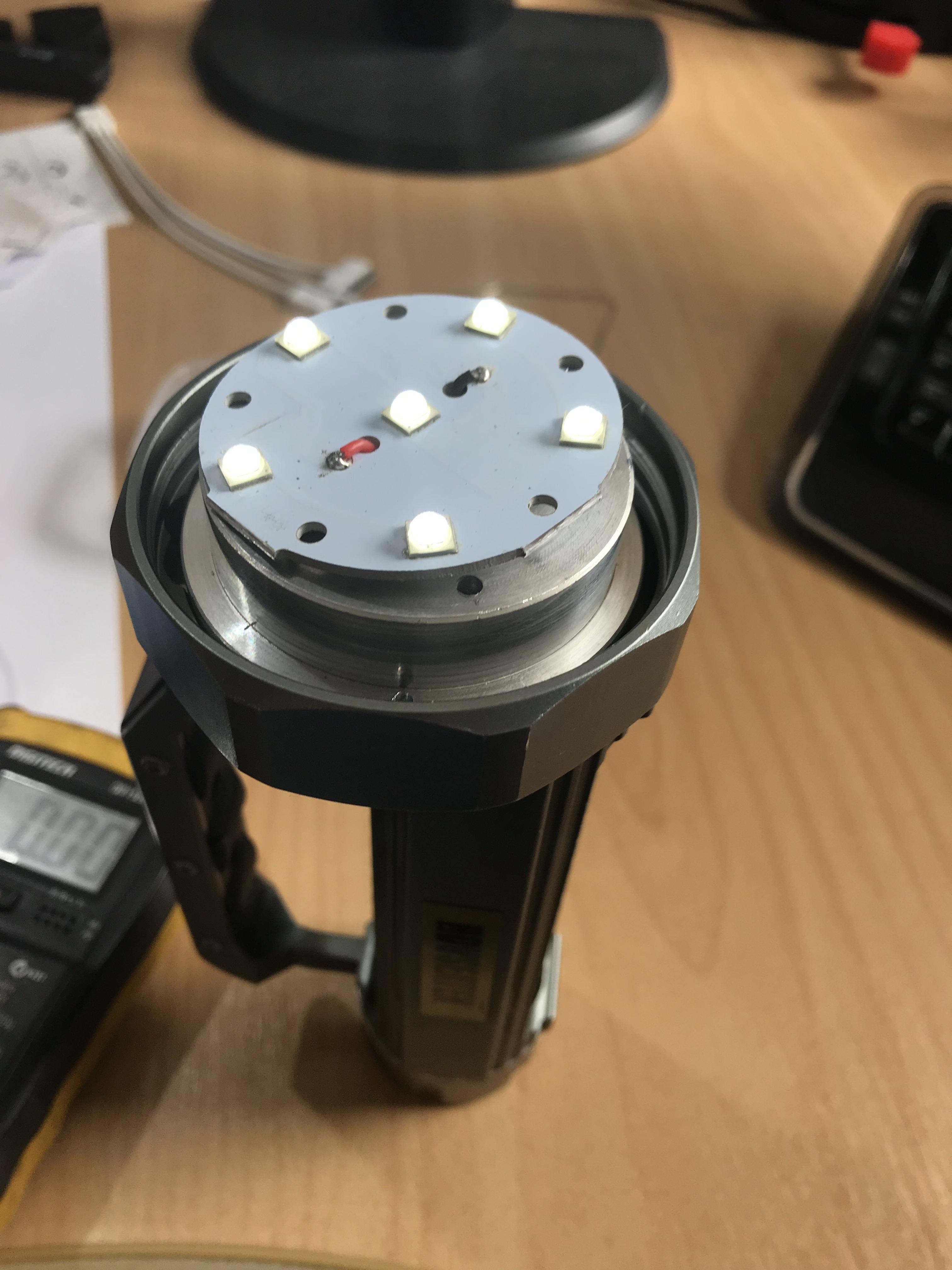 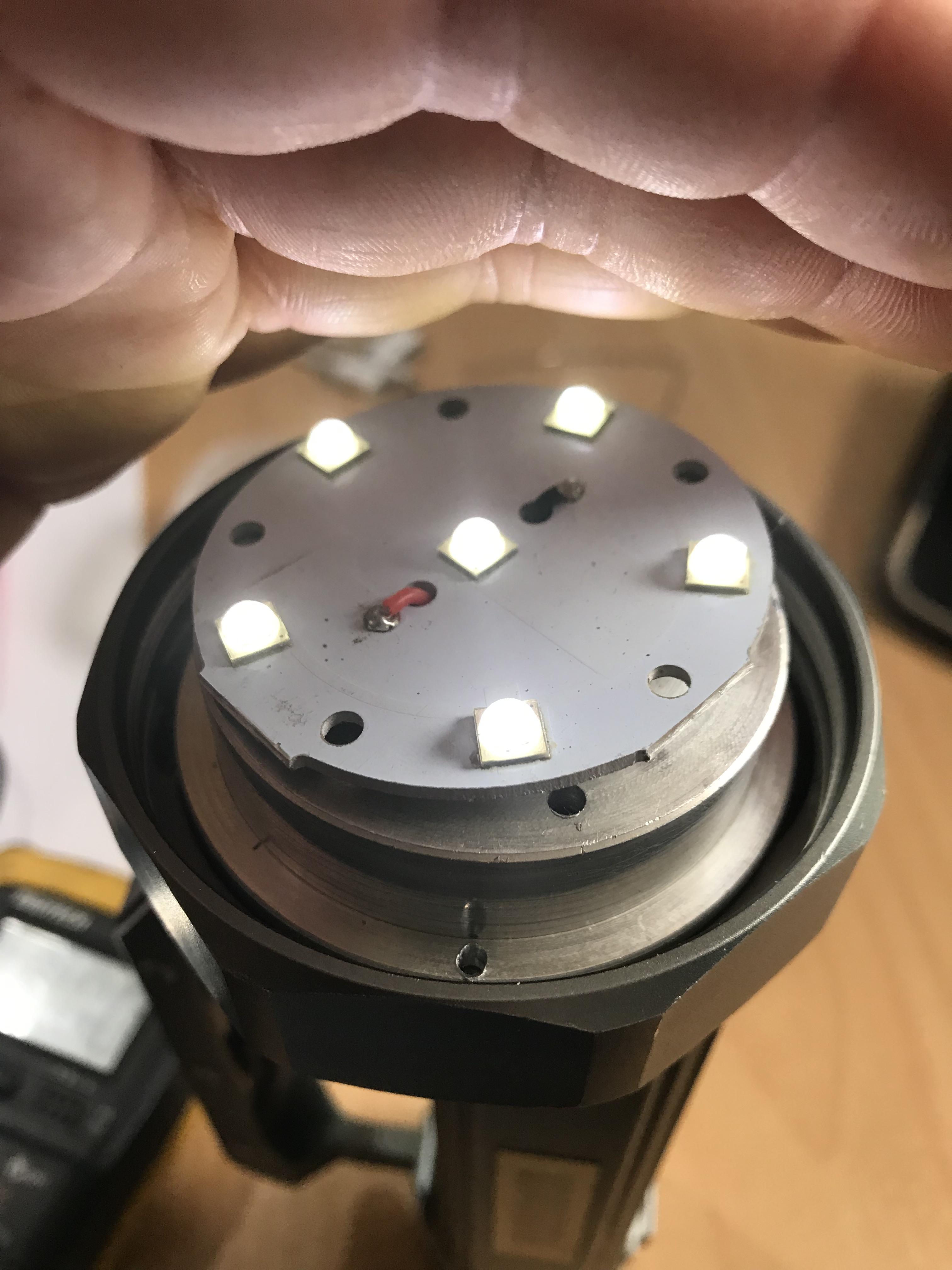 These photos are in comparison to a BigBlue LV8000P video light. 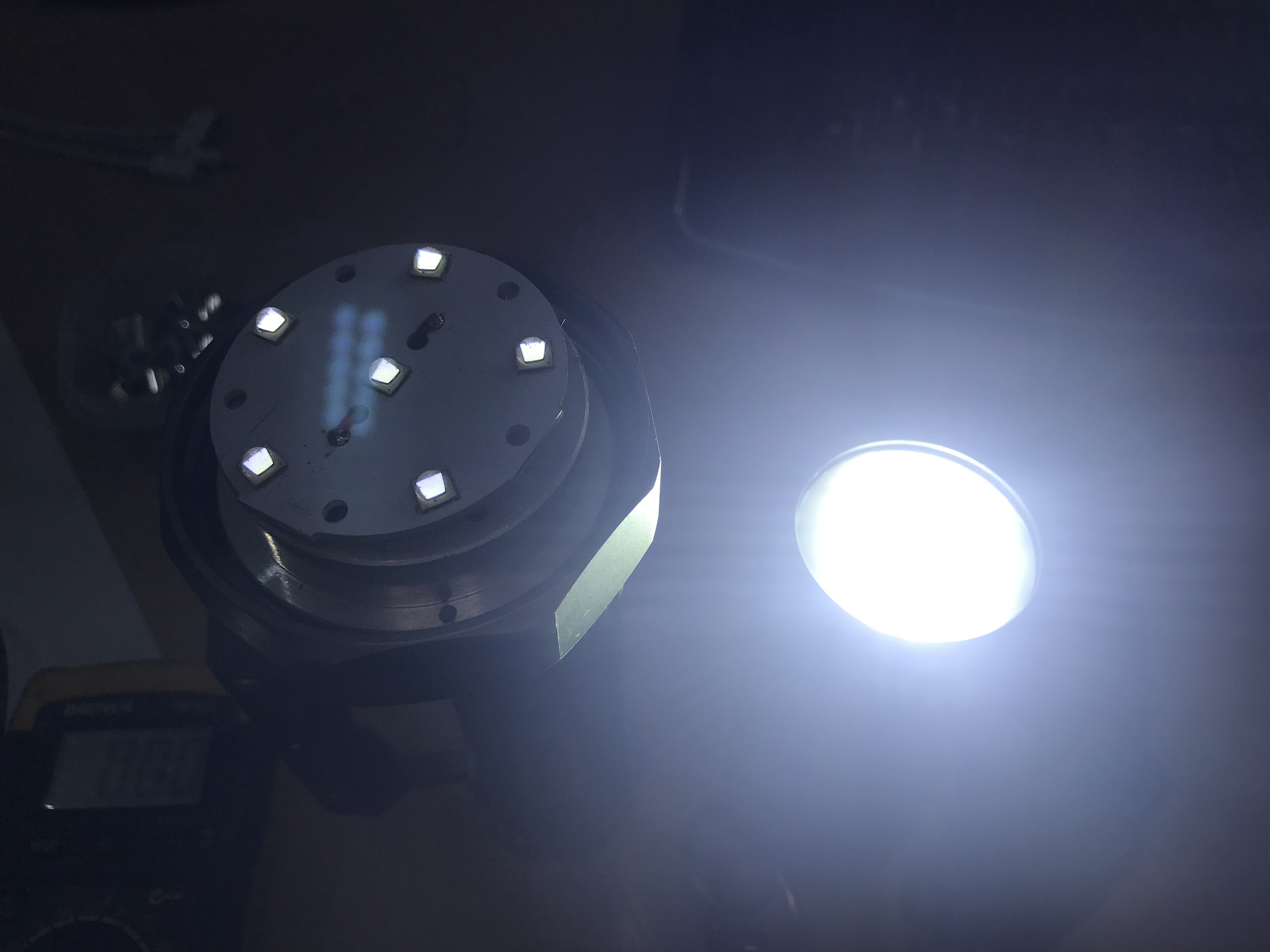 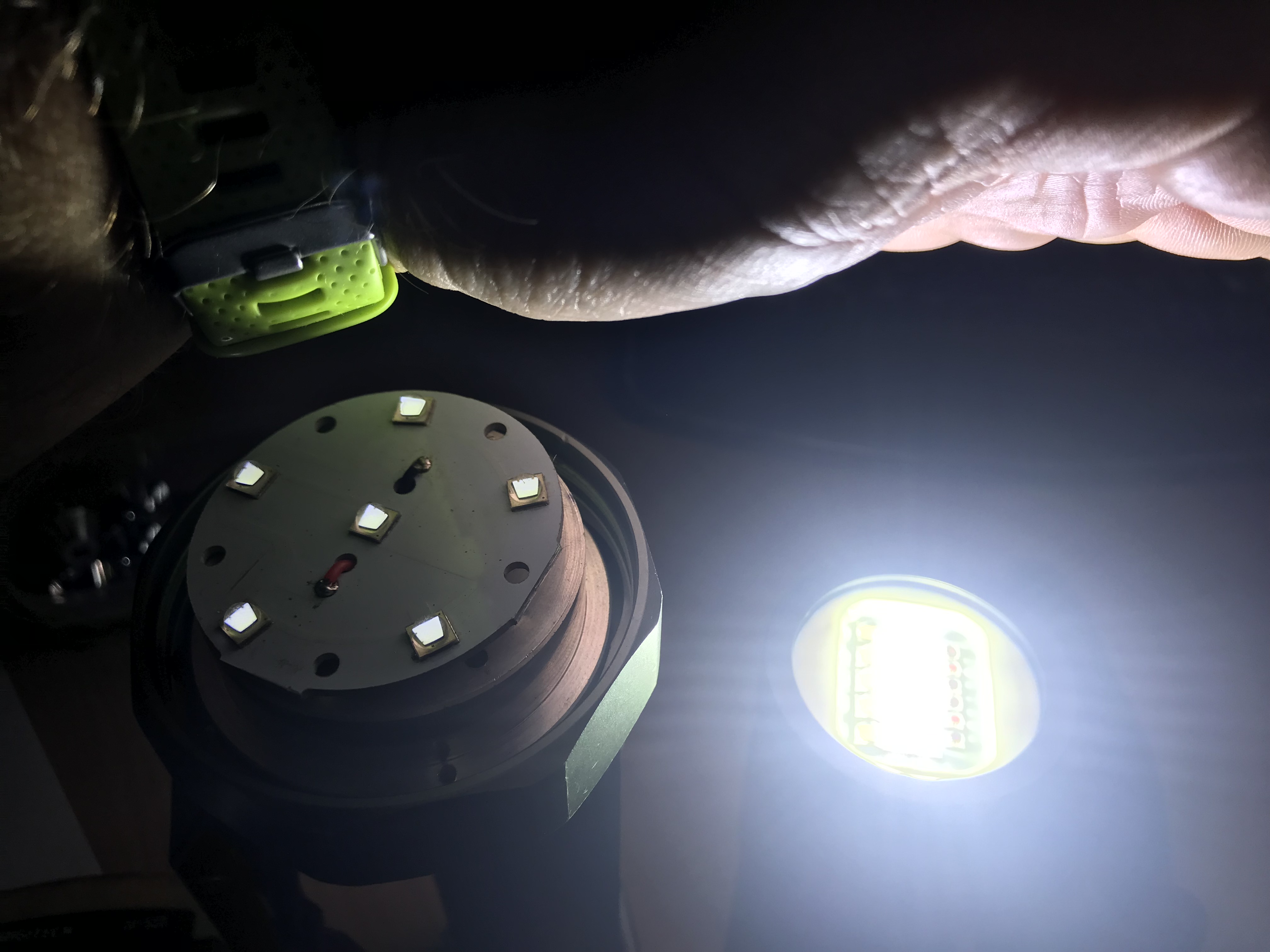 I would definitely start with the batteries. If they are only 2.7-2.8V, they are either completely discharged or failed. I would not expect the light to perform to spec, or even close, with those voltages. LiIon batteries should be over 4V each straight off charge (4.05 to 4.2 depending on charger). After resting, they will be 3.9-4.1V.

Another thing about LiIon batteries is that they should not be left fully discharged (opinions vary, but range from 2.5-2.8V) for long periods because this accelerates the aging process. If deeply discharged (I forget the number, but I think around 2.0V or less), they become unsafe after a day or two, and should not be used again, even if you can successfully charge them and they appear to be okay.

32650 batteries are pretty hard to find, except in LiFePO4. Those may or may not work well in this light.

You could use 26650s with a sleeve. I think they are available in 5500 mAH ratings, maybe a bit higher today. Just make sure you get from a trusted source, as there is a lot of garbage out there.
T

So when I first killed this light (about a year or two ago), I went through the process of charging the batteries fully and testing the light, and it was barely even illuminating the LEDs after 12 hours on charge. Now I cant remember if I checked the battery voltage at that point.....but I'm sure I would have.

Anyway, I have just pulled the batteries off the charger again (yes I charged them a day or two before posting this), and have 4.2v on each now. Chucked them in the light, and boom........bright light!

So either I am totally and completely STUUUUUPID, and its been the batteries all along,

pulling this light apart 10 times over has moved something that's been damaged from the heat. Maybe closed a broken solder joint for eg.

So I will check the battery voltage in another 6 hours or so and see if these batteries are 100% dead. I will also hunt around for some new ones, but other then batteries, what are the usual things that get damaged from heat on a light that is left on out of the water? Are there any tests I can run on the LED's or the driver that might give me an idea on how healthy these parts are? i.e. resistance tests etc?

Man I hope I'm really dumb and this is a supply voltage issue........but not checking the voltage when I first stripped the light down just isn't something I wouldn't do.....so I'm skeptical and feel like there is still something broken!

If you haven't found any signs of excessive heat anywhere on the boards and the LEDs themselves all seem to be fine then yes, it really was the batteries. One of the usual things damaged by excessive heat in flashlights is the batteries. With the voltages you were getting from the original cells it's very likely those cells are fried but just happened to work for a bit. Okay maybe not completely but I would have a hard time believing that Li-Ion batteries left in a flashlight that was on for several hours and then just left on a shelf for a couple of years are going to be usable and safe. Find some to replace the originals, even if they aren't the same cells.

Also...I have once or twice gone through electronics and wiring diagrams for hours thinking it had to be something else only to finally get around to testing the batteries and discovering that they had somehow just totally tanked, no charge at all. The cells were bad to begin with. Ever since then I have made a rule for myself to test the batteries/power supply first, then contacts and connections. It has saved me a lot of head ache trying to figure out what went wrong. I have yet to discover a more advanced problem, it has always been one of those two.
Last edited: Feb 5, 2020

These lights are standard china brand , like https://www.dx.com/p/zhaoyao-6-lamp-l2-light-diving-flashlight-magnet-controlled-stepless-laser-dimming-camping-climbing-portable-lights-2037016.html ; a few years ago they are many on eBay

HDVSeaTek is only sticker over housing.
T

lucca brassi said:
These lights are standard china brand , like https://www.dx.com/p/zhaoyao-6-lamp-l2-light-diving-flashlight-magnet-controlled-stepless-laser-dimming-camping-climbing-portable-lights-2037016.html ; a few years ago they are many on eBay

HDVSeaTek is only sticker over housing.
Click to expand...

Wow!!! This I didn’t know!! It’s been a pretty reliable light with amazing output for that kind of money!! Bit bloody cheeky of these guys to slap a brand on it and sell it for hundreds of dollars more though!

Lucca, are you sure the china brand isn't a knockoff of the HDVSeaTech original? Most of the early Archon chinese lights were knockoffs.

I did not find nothing from them , what could represent them as original manufacturer. It is not something innovative , good design , good manufacturing ,....... so who care

Just thought I would let you know that I have put the light back together, brought a new set of Vapce 26650 batteries, built a sleeve so they fit snug and the light seems to be working great. Will take it out for a swim next time I dive and see how it goes against my bigblue.

B
Help with a little bitty light