[Part 1]
Received a sample Fenix C7 for testing earlier this months. The second part of this review will be my comparisons of Fenix C7 with Olight's Seeker 2/Pro offering. 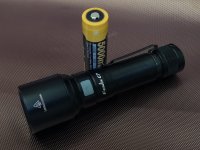 This is a new 21700 battery all purpose flashlight. Featuring max 3000 lumens and USB-C rechargeable capability.
Let's take a quick glance at the specifications: 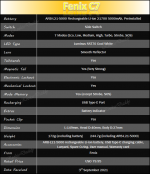 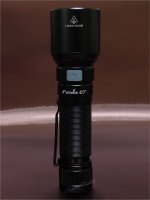 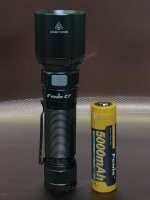 take note that because the tail cap has strong magnet, the battery will get pull out together when you replaces the battery or wanted to recharge the battery in an external charger. So once you unscrew the tailcap, pull it out slowly. 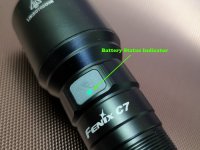 Although Fenix says that "this only works with Fenix ARB-L21-5000 battery", my testing shows that it works with any good quality 21700 (both protected and unprotected) batteries as long as it's button top and less than or equal to 76mm (The Fenix ARB-L21-5000 is measured 76mm).
Like the previously reviewed PD35 v3.0, the battery indicator only lights up for 3 seconds everytime Fenix C7 being turned ON. I would really like to see Fenix offer additional way for user to check the status of the battery charge, and not wait until it reaches below critical level to flash the red LED indicator.

Fenix C7 features a USB-C rechargeable port, covered by a protective rubber to protect the port from the elements: 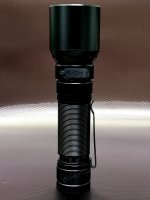 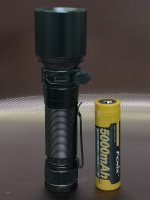 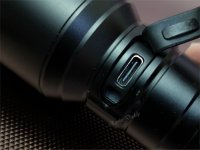 While charging, the battery indicator will turned RED: 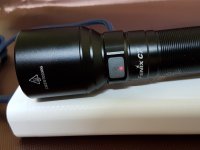 and GREEN when charging completed: 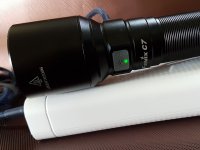 A 2.4A USB output power source charges the ARB-L21-5000 at 2A rate, the charging will take approximately 3 hours to fully charge the battery from near empty via the USB-C port.

There are 2 big lanyard holes at the tailcap... 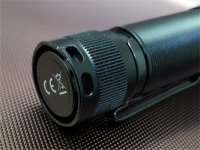 however, the design of the tailcap creates opportunities for the tailcap to easily dented around the outer rim: 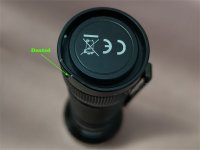 The dent that you can see from the picture came directly from Fenix, haha...

The pocket clip is thinner than I like and allows you to rotate the clip position in any direction you like easily. 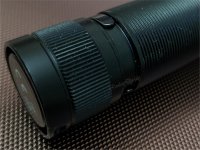 The Luminus SST70 LED powering the output of Fenix C7. My test unit is quite greenish at the lower three modes (Eco, Low, Med), while High and Turbo is acceptably white. 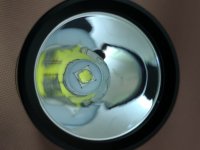 (Rant)Many in social medias who bought their flashlight from (O)ther manufacturers often claims their greenish cool-white and neutral white light as being neutral or warm, they are not. They are just Puky-GREENISH!(End-Of-Rant) 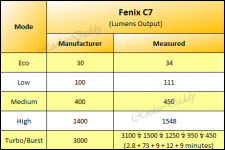 The usual disclaimer: I do not claim the above measured lumens as authoritative nor an indication of over/under-stating the number given by manufacturer. It's calibrated against some known light output (e.g. SureFire, Elzetta, etc.) so take it with a grain of salt and just as a relative reading.

My runtime plot for Fenix C7 Turbo and High modes: 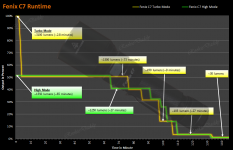 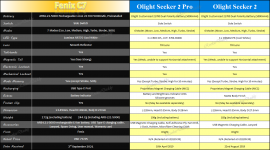 I heard that Olight has a new Seeker 3 (together with Seeker 3 Pro) to be release very very soon, so below I added the Seeker 3 to the specifications:

I've also highlighted the Pro of Fenix C7 in Green while those that changed (or might changed or improved) in Seeker 3 in Red.

Fenix C7 is both longer and heavier than Olight Seeker 2/Pro: 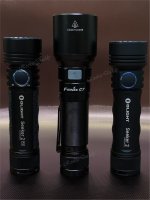 The extra length of Fenix C7 comes from the smooth reflector used in Fenix C7 to get a good throw (pretty high intensity) while Olight uses TIR optics to gives a wide flood.
Some may ask if this is an apple-to-apple comparisons, well, it's not, but this comparisons nevertheless give potential users of Fenix C7 and Olight Seeker 2/3/Pro an opportunity to be inform of ones opinion about these flashlights.
Also, full disclosure: I like Olight Seeker 2 so much that I have 2 units on hand and you can search for my review of Olight Seeker 2/Pro. 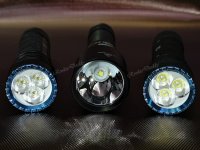 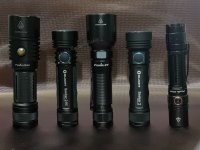 The battery used in Fenix C7 and Olight Seeker 2/Pro: 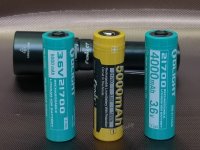 A quick runtime plot to compare the output vs runtime of Fenix C7 to Seeker 2 (non-Pro version): 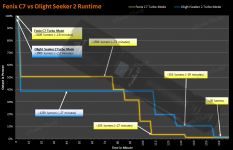 Both are what I considered proper illumination tool as they do not leave the user suddenly in the dark. The approximately 30 lumens below the ANSI/PLATO FL1 10% output is still very usable in extended illumination needs.

Following is a table to offer an overview of the output and some tested runtime/output by yours truly:

From above table, you can see Fenix C7's advantage is clearly in the intensity (candela) and these makes it a better general purpose flashlight that we can use around the house or outdoor. Due to the larger LED surface, Fenix C7 not only gives you the distance, but the spills are pretty usable too.
For yours truly, between Fenix C7 and Olight Seeker 2, I like to reach for the Seeker 2 for around the house use and for close-up illuminations, but when I'm on an activity that requires both outdoor and indoor illuminations, I'll definitely reach out for the Fenix C7 as I will need both close-up illuminations and to see far in the distance.
My only wish is Fenix C7 comes in a lite OP (Orange Peel) reflector to smooth out the beam pattern and raise the switch button a little as it's a little hard to find the switch button in pitch darkness. For the first, I can always add a thin layer of diffuser film to get a good flood output and remember, it's possible and always easier to make a throwy flashlight floodier but not the other way round, and for the seconds, this is my quick mod to Fenix C7: 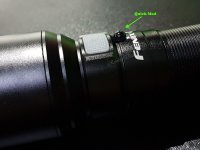 just add a small black pearl button at the button of the switch, this let us quickly find the switch button in pitch darkness.

Following are a couple of output comparison to a corner of my house, the wall is painted light green color: 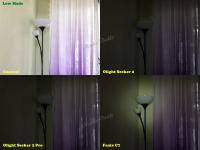 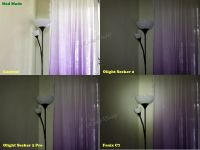 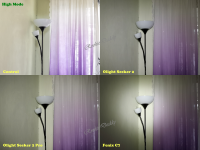 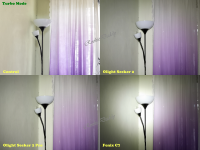 In conclusion, this is a good general purpose flashlight for around the house and outdoor use for a great price. Now, if only I could "transplant" the Olight UI to Fenix C7... hmmm...

This is a niggle with my Fenix UC30UE. If I'm in a little bit of a hurry, the UC may get a 720º spin before I find the switch. I'll have to find something like the black pearl fix for it.

The UC isn't a tactical light so it's not a problem, just a tad annoying.

I've got a Seeker 2 Pro that I really like, and Olight just sent an email about the Seeker 3/Pro going on sale in a day or two.

The video at the site seems to show a beam that's very smooth to the edge with no delineation between throw and spill.
E

Thursday at 1:20 AM
Derek Dean