The Klarus XT2CR was sent to me for review by GearBest. No other payment was received for this review, and I receive no commission from the product link or sales.
Product page: https://m.gearbest.com/led-flashlights/pp_702467.html


The Klarus XT series is a popular range of lights with a “tactical” interface with dual tail switches, offering instant access to turbo, strobe, or low depending on the mode. The XT11GT and XT12GT have a balanced, and thrower beam profile respectively, and intelligent temperature protection system for controlled step downs. The XT2CR brings this technology and user interface into the 18650 tube light category. With the 18650 tube light market being saturated with models at different price points, how does the XT2CR compare? 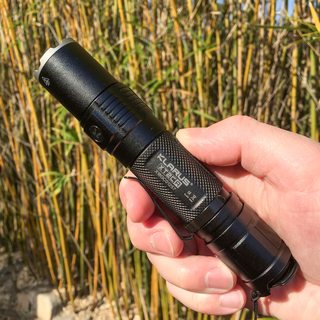 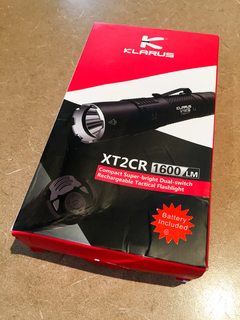 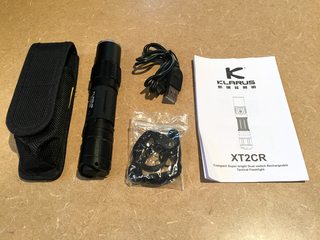 
There is a a micro USB charging point near the head, with rubberised cover/plug, which I prefer over magnetic charging points that have more potential for short circuit. The internal charger terminated the charge at 4.15V, which is a little low, but probably better for long term battery life. Charging rate is 1A, and took 3.5 hours to charge from 2.63V.


There is an included “3600mAh” Klarus branded protected battery. I suspected that this is based on the excellent 3500mAh Sanyo/Panasonic NCR18650GA, however I get slightly higher capacity readings from this battery than my GAs. Users are not restricted to using this battery, and any medium/high drain 18650 designed for continuous 7A current or more can be used in this light. Springs at both ends allow for both button top, raised top, and flat top batteries. The colour indicator during USB charging displays red when charging, green when full, and orange to check battery. In use, the colour indicator turns on for a short period when the flashlight is turned on, and shows remaining battery capacity - green >70%, orange 30-70%, red <30%, red flashing <10%. This appeared to work correctly during use.


The light is rated to IPX8, so can theoretically be used in bad weather, or survive a dunking in water.


The bezel is crenelated for self defence, based on the target market. Thankfully, for those who don’t like crenelated bezels, it can be unscrewed. Other design features include a glass lens with AR coating for scratch resistence, HAIII anodising, and grippy knurling. There is a stainless steel pocket clip included, which can’t be reversed.


There are two switches in the tail, which will be explained in the next section. 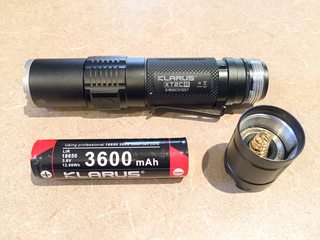 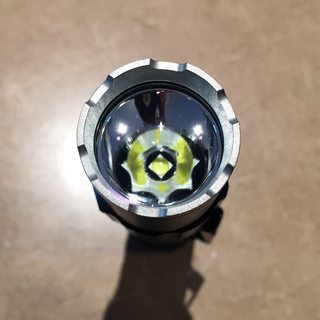 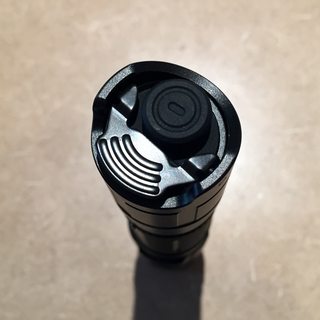 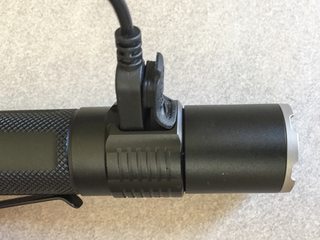 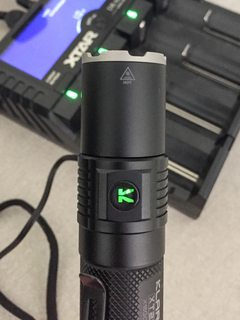 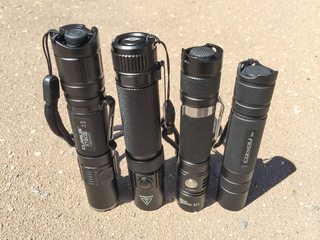 
The XT2CR has two tail switches, the primary switch (which is a circular button) and a mode switch (which is a paddle). The attached photo (below) probably best explains the flexible user interface, though I found that some of the required timings are longer than specified. Both switches have some forward clicky / momentary functionality. 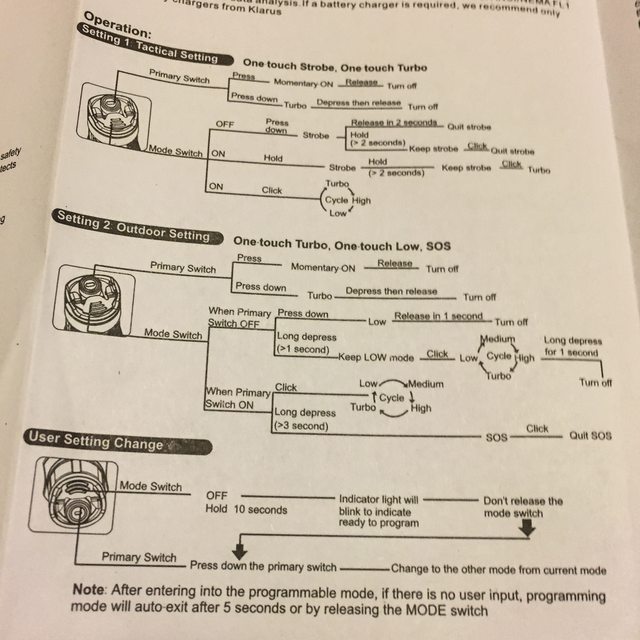 There are two settings that can be changed by holding down the mode switch for 10secs, and then clicking the primary switch. The two settings are “tactical” and “outdoor”.


In Tactical setting the primary switch acts as momentary on, or on/off to turbo depending on how far it is depressed. Once fully on, the mode switch can be used to change modes in order Turbo>High>Low. Strobe is selected using the mode switch as follows:
Press < 4secs (ish) = Momentary strobe (constant fast Hz)
Press and hold = Constant fast Hz strobe (release and click again to turn off, or click primary for turbo)
Press > 4secs(ish) = Variable Hz strobe (click to turn off, or click primary for turbo).


I really like this user interface, in particular the momentary for both turbo and strobe are useful for those who require tactical functionality, and momentary for low may be useful for stealthy night use. Being a light painter I like the ability to switch between turbo and strobe, and back again on the fly (as shown in the photo below). Omissions to the user interface, are lack of memory mode, and I would personally prefer just a constant fast strobe. 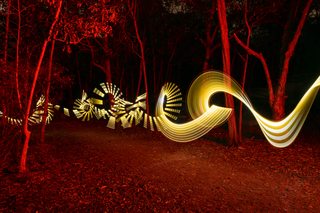 The light can be unlocked out by unscrewing the tail cap slightly. 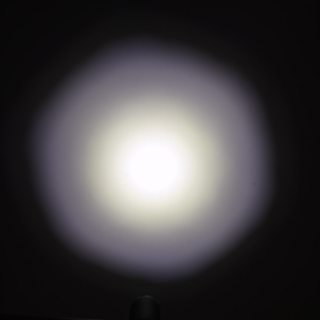 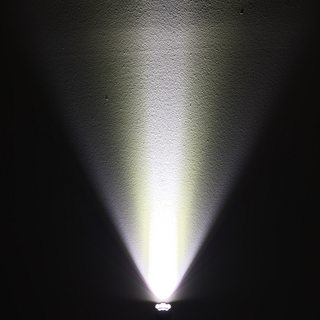 18650 tube lights cannot sustain continuous output beyond around 600-700 lumens without getting too hot to hold. As the “lumens wars” forces manufacturers to increase the output rating for more sales, they also need to find ways to control the heat, and thus output. Rather than using a “dumb” timer based step-down, Klarus have implemented an intelligent temperature protection system, which reduces output up or down based on temperature. When testing indoors there was a noticeable blink each time the light automatically adjusted the output, which can occur a few times each minute. I didn’t notice this blink when outdoors.


A runtime test in turbo was performed, indoors, at 23C/73F ambient temperature, and the light tripod clamp mounted (and thus minimal heat sinking other than air). Thus this test is a near “worst case” scenario for sustaining high output, but a near “best case” scenario for runtime. Initial output was measured at 1550lm @30secs and @1min. Multiple step-downs from 75secs then decreased the output to 640lm @3min. The output then varied like a rollercoaster rising and falling again between 640lm and 1230lm until around 10 minutes. After 10 minutes the output continues to vary between 500lm and 820lm, gradually gaining equilibrium around 640lm. @130mins, the light dropped to 180lm, @145mins dropped to 90lm, and kept going for another hour at which point I stopped testing - battery was at 2.62V. Due to the temperature control, output, and thus runtime will vary considerably depending on ambient conditions - you mileage will vary! I liked the fact that this light will not suddenly leave the user in the dark.


While the modes are well spaced, in future versions I would prefer to see a mode in-between turbo and high, that allows for the highest possible constant output (? approx. 600lm). A moonlight mode would also be nice.


Tint is at the better end of cool white, estimated around 6000k. There is some tint shift, with the centre of the beam being almost pure white, yellow tinted inner spill beam, and purple tinted outer spill beam. There is a very small dim spot artefact in the centre of the hotspot, though this is not noticeable in real world use. CRI appears to be the usual >70CRI, which is useable for most purposes.


PWM was evident in Low and Medium mode. 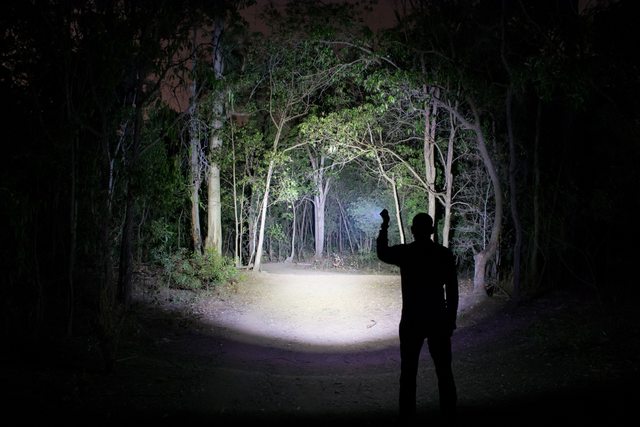 
Things I didn’t like:
No mode memory
No moonlight mode
Large gap between high and turbo mode.
Noticeable blink each time the light automatically adjusts the output.


The Klarus XT2CR is an impressive, high quality “tactical” 18650 tube light, which will appear to those who like a forward clicky/tactical user interface. As 1600 lumens is a high output for a light of this size, output is reduced fairly rapidly to avoid overheating. However, this stepdown in output is controlled well by the intelligent temperature protection system. Micro USB charging will appeal to the consumer market. I expect the XT2CR to be a very popular light, and it will definitely be staying in my camera bag!

Note: X-ray image of internals and video of UI to be added later.