I received the MH25S from Nitecore for the review
The MH25S is a tactical flashlight, featuring a SST-40 emitter powered by a 21700 battery rechargeable via the USB-C port on the light. The MH25s is controlled by 2 switches on the light.

The MH25S arrives in this box 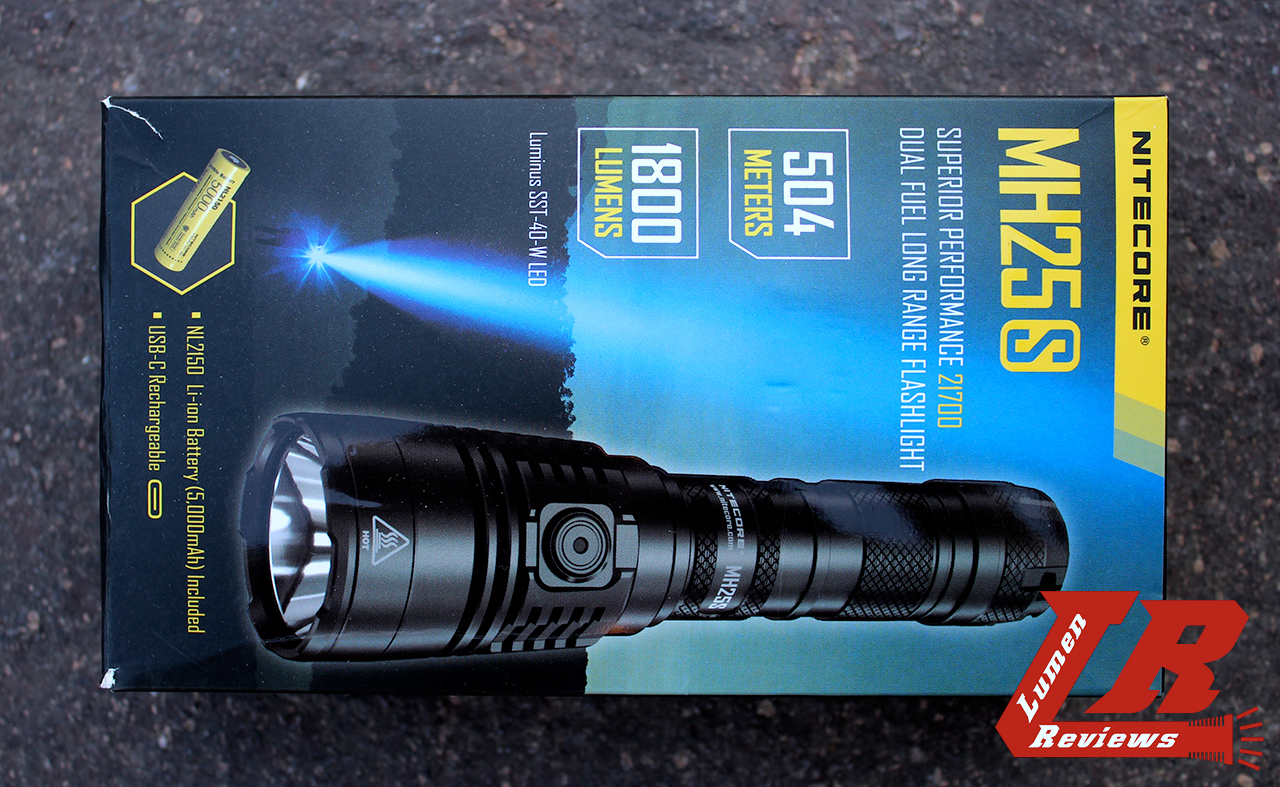 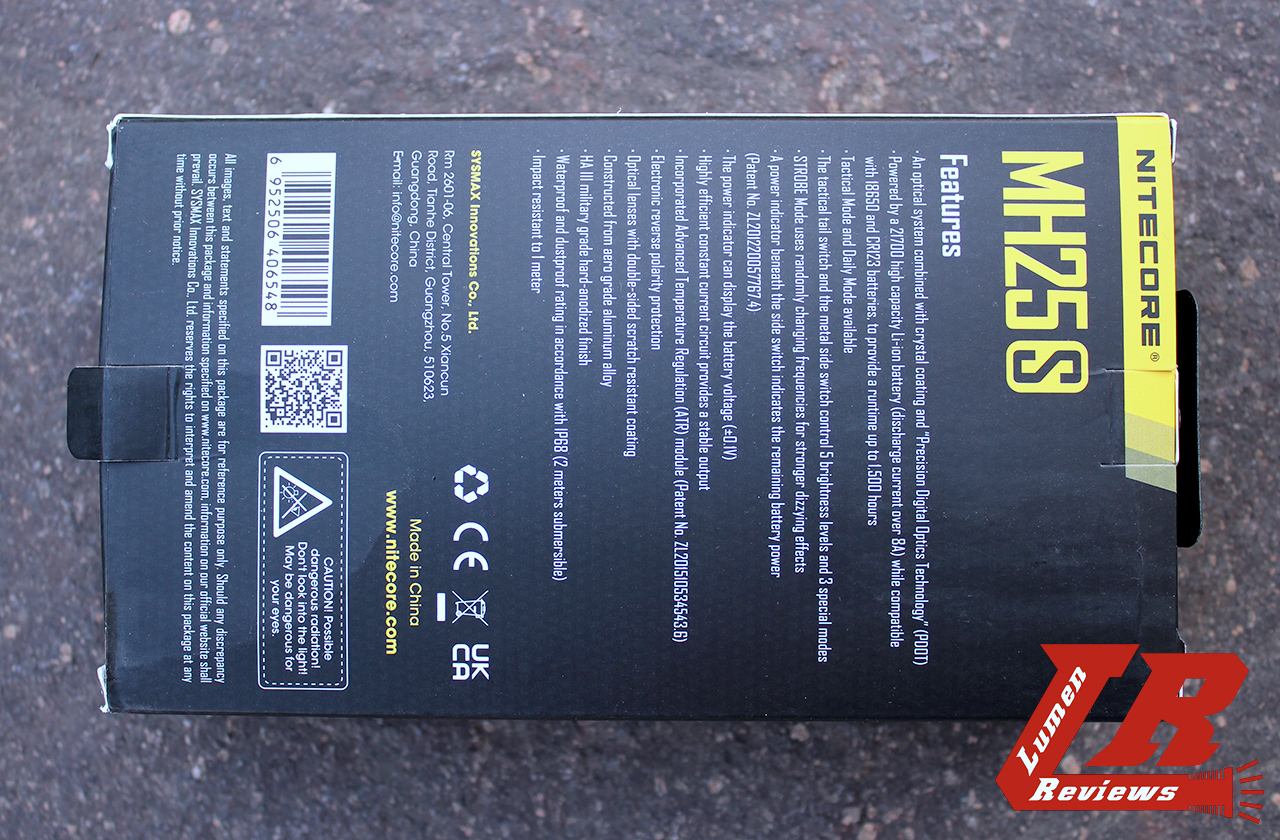 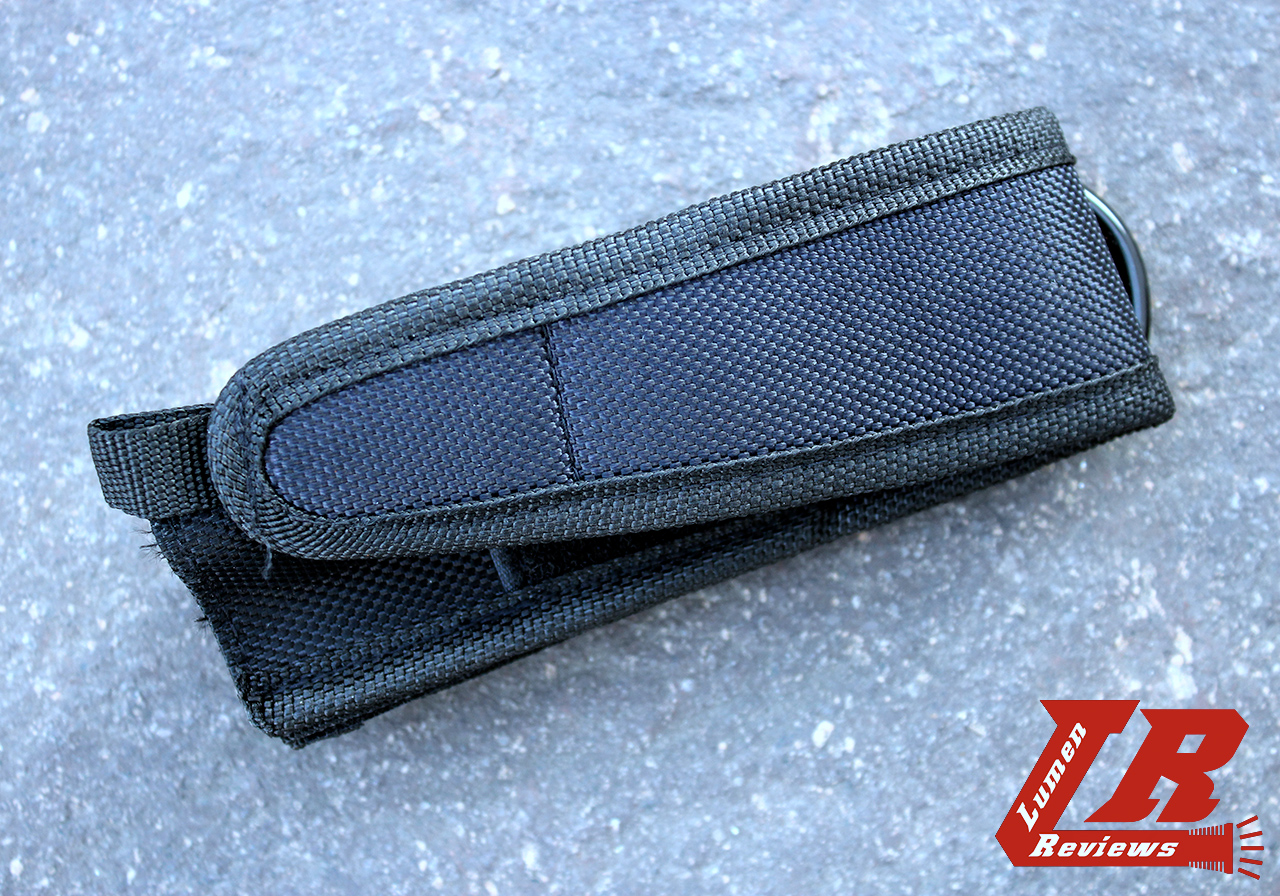 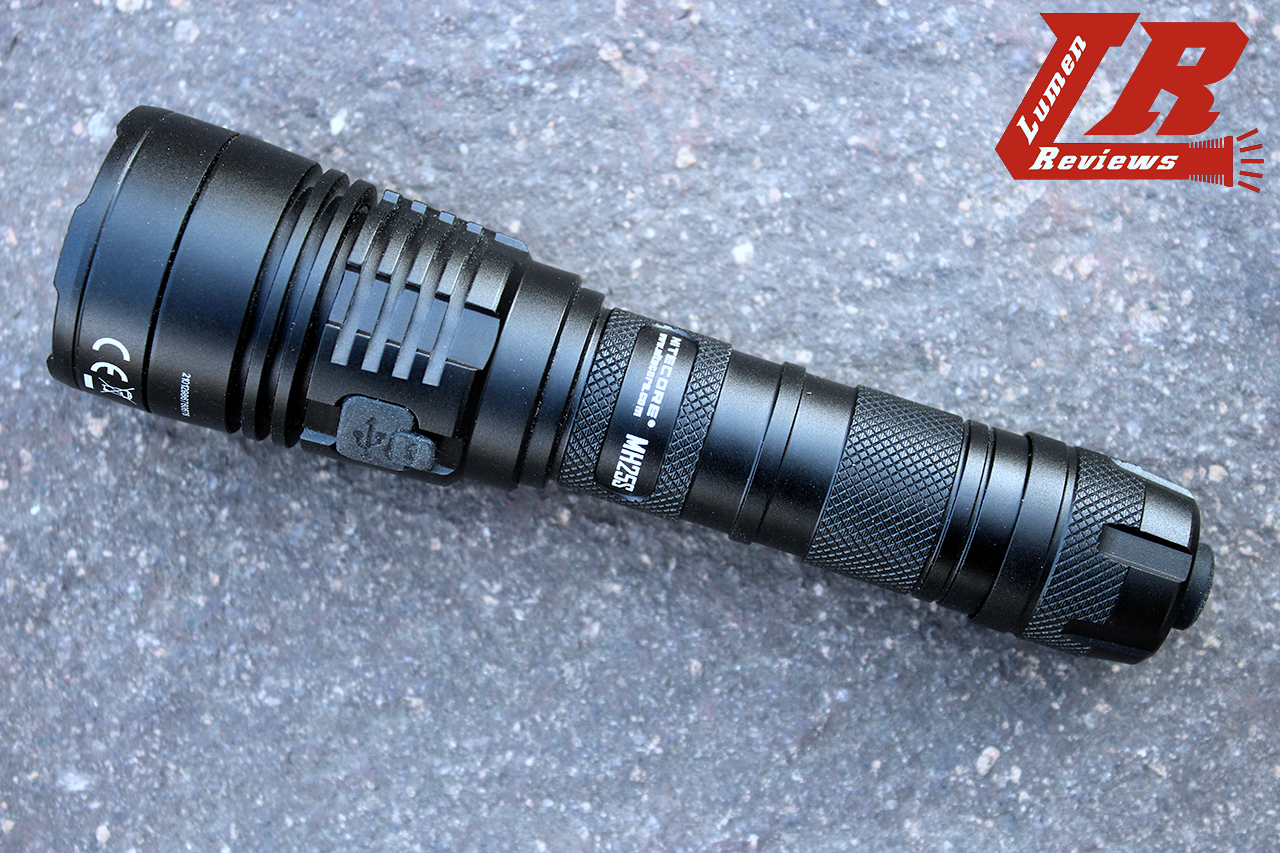 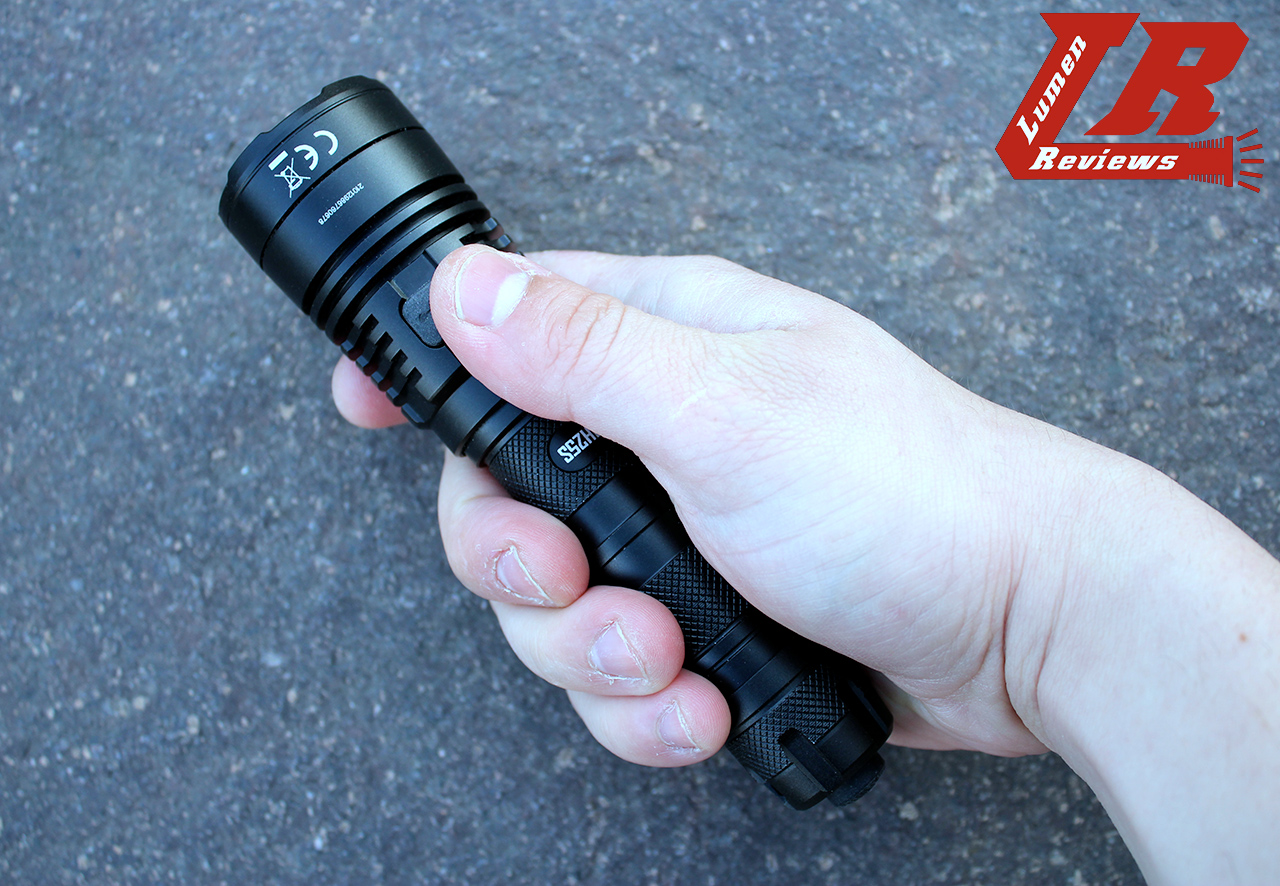 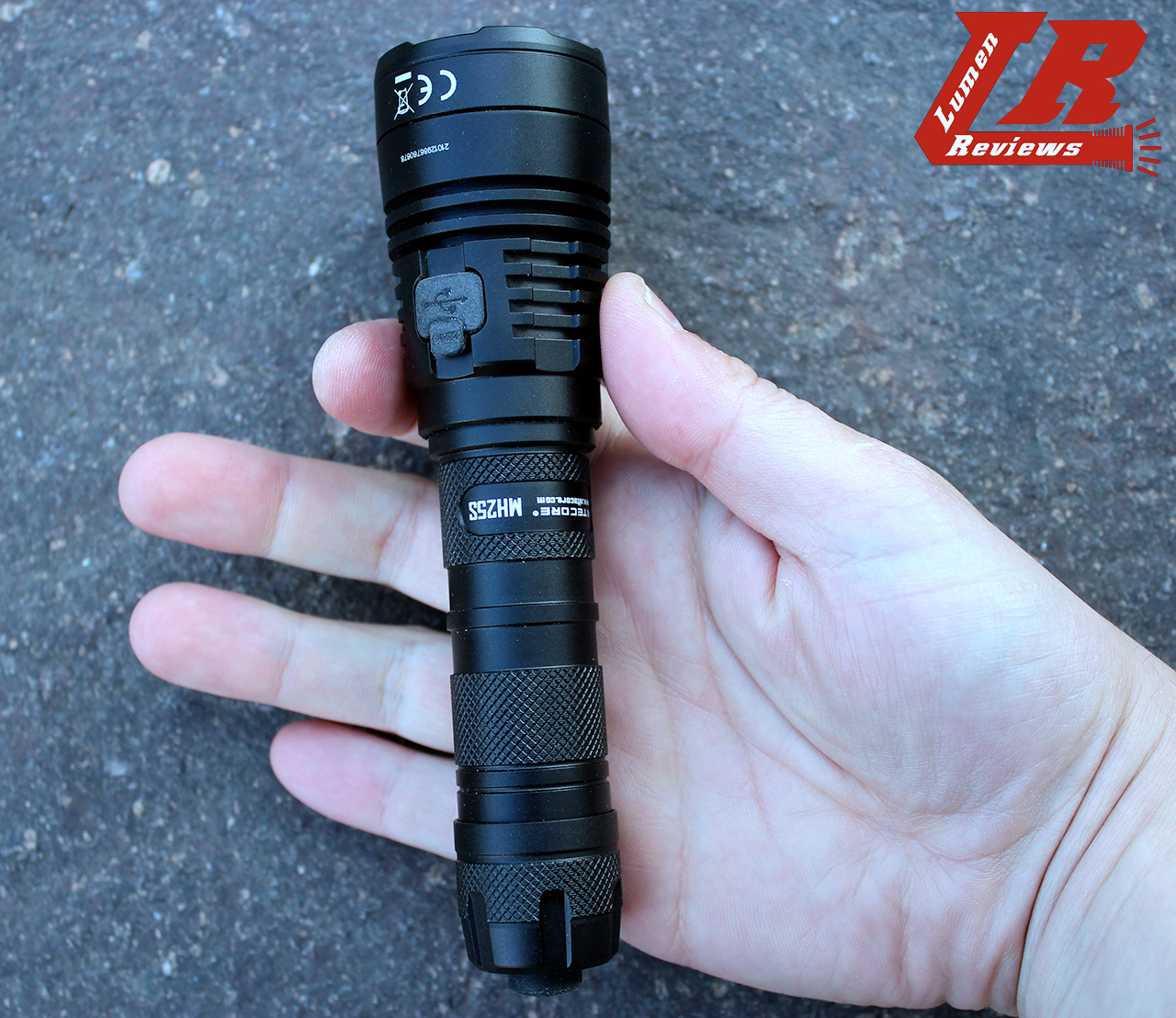 In the head we find the SST-40 emitter in a deep smooth reflector, under a AR treated glass. 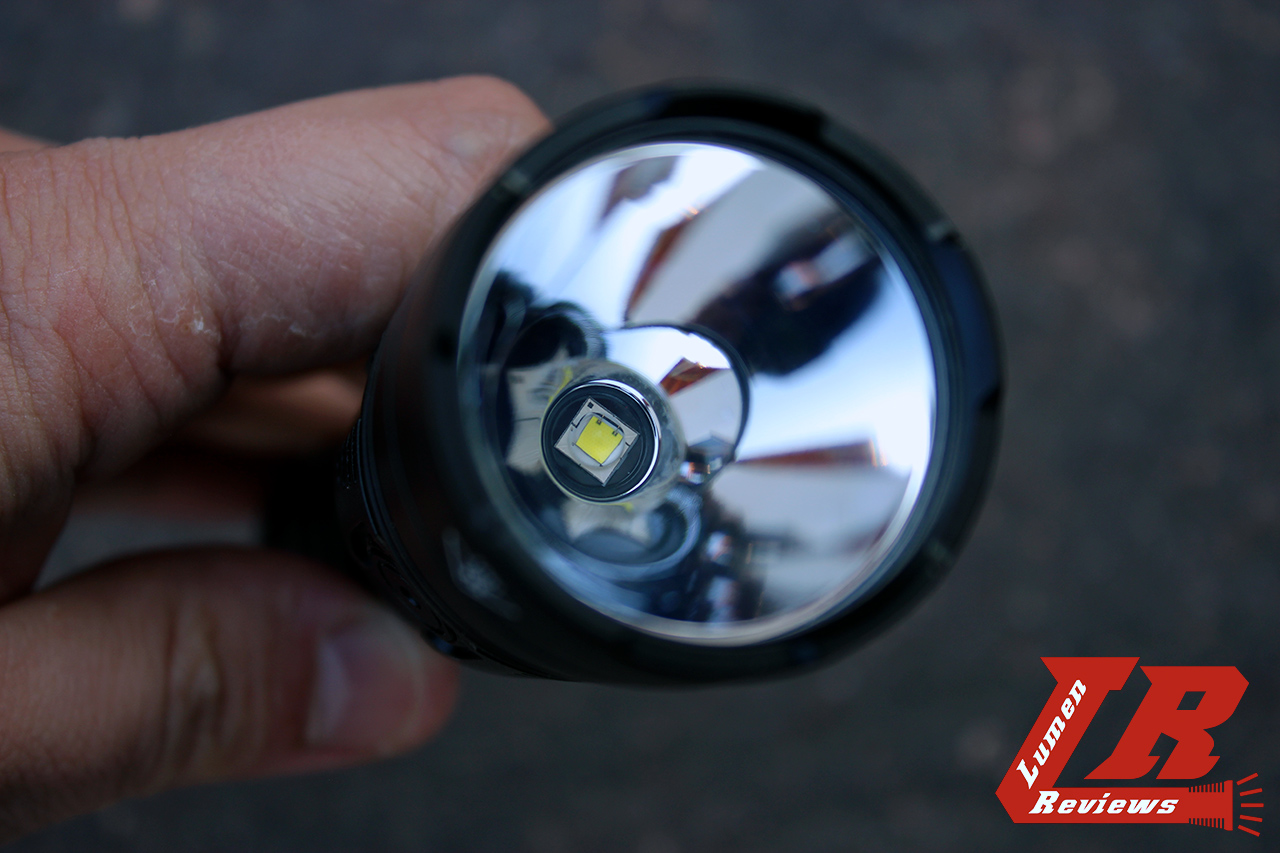 At the head we find both the electronic backlit switch and the USB-C port, protected by a rubber cover. 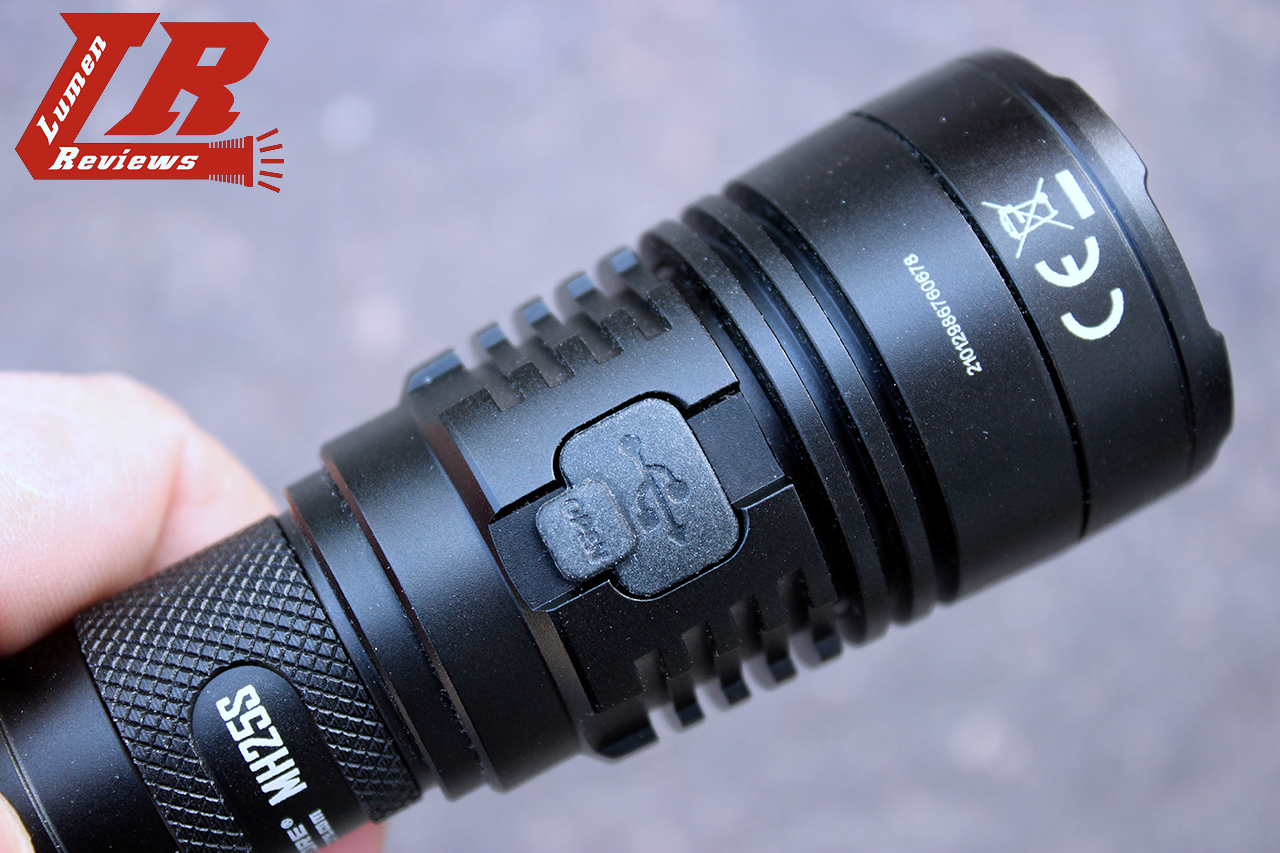 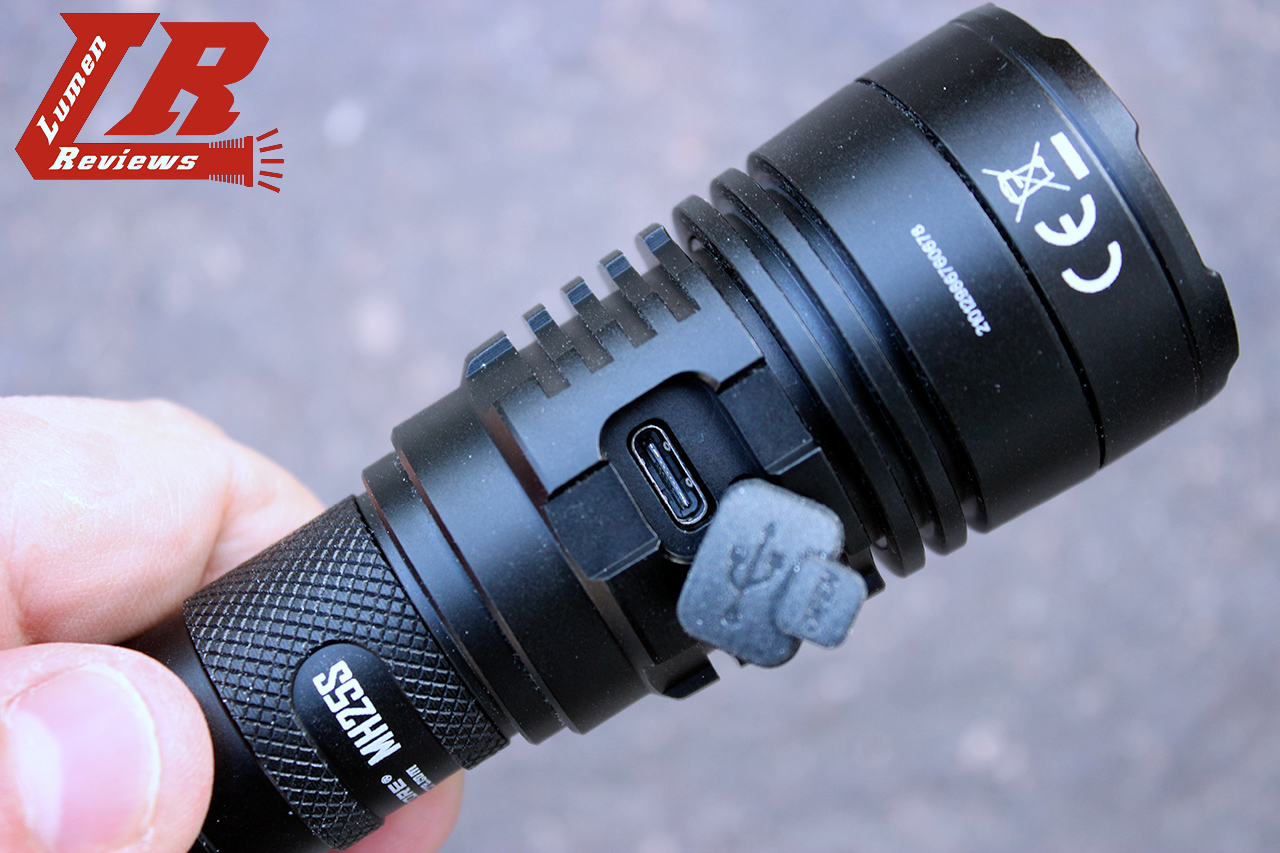 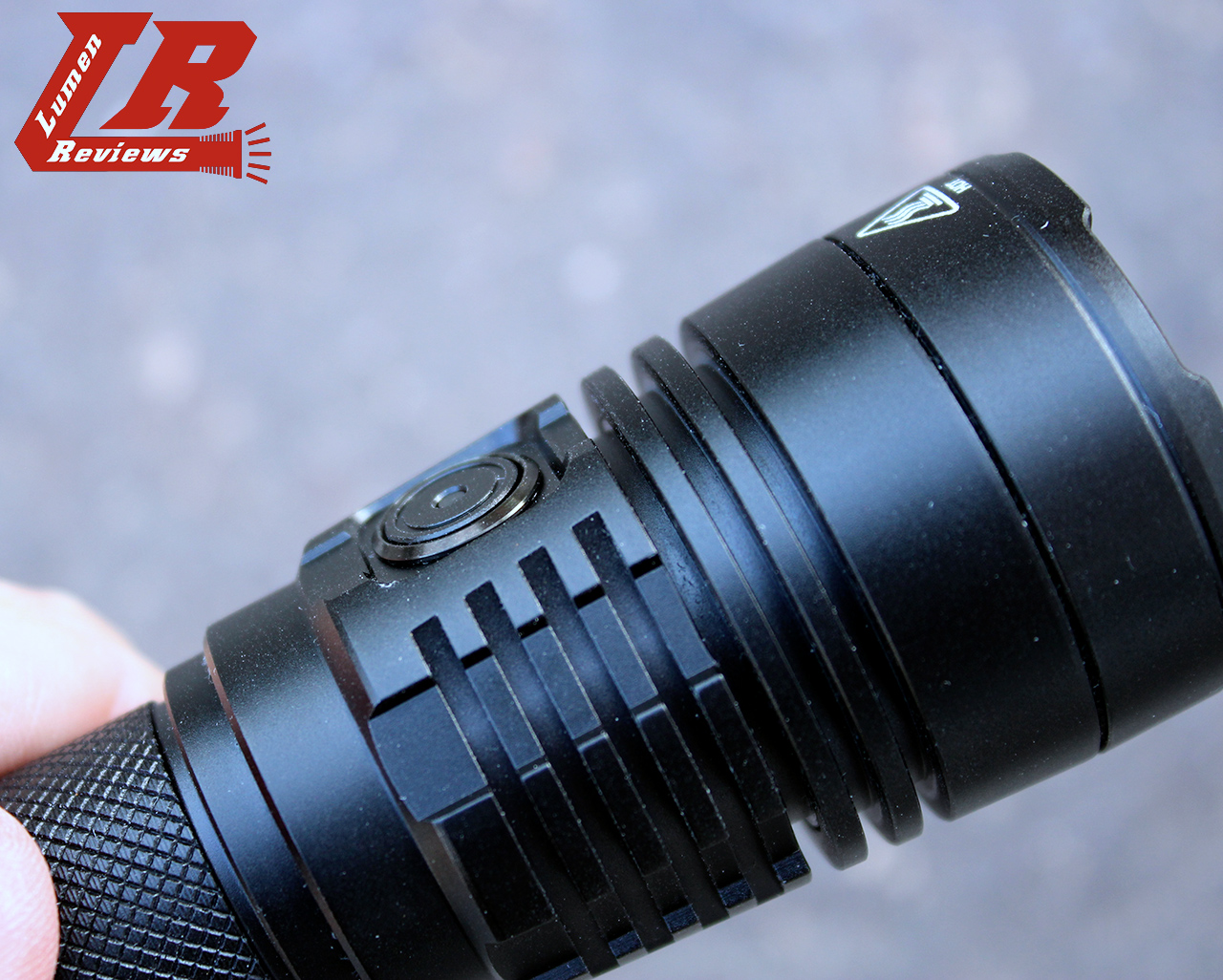 The body features a portion with rhomboidal knurling, and is glued to the head on my sample. 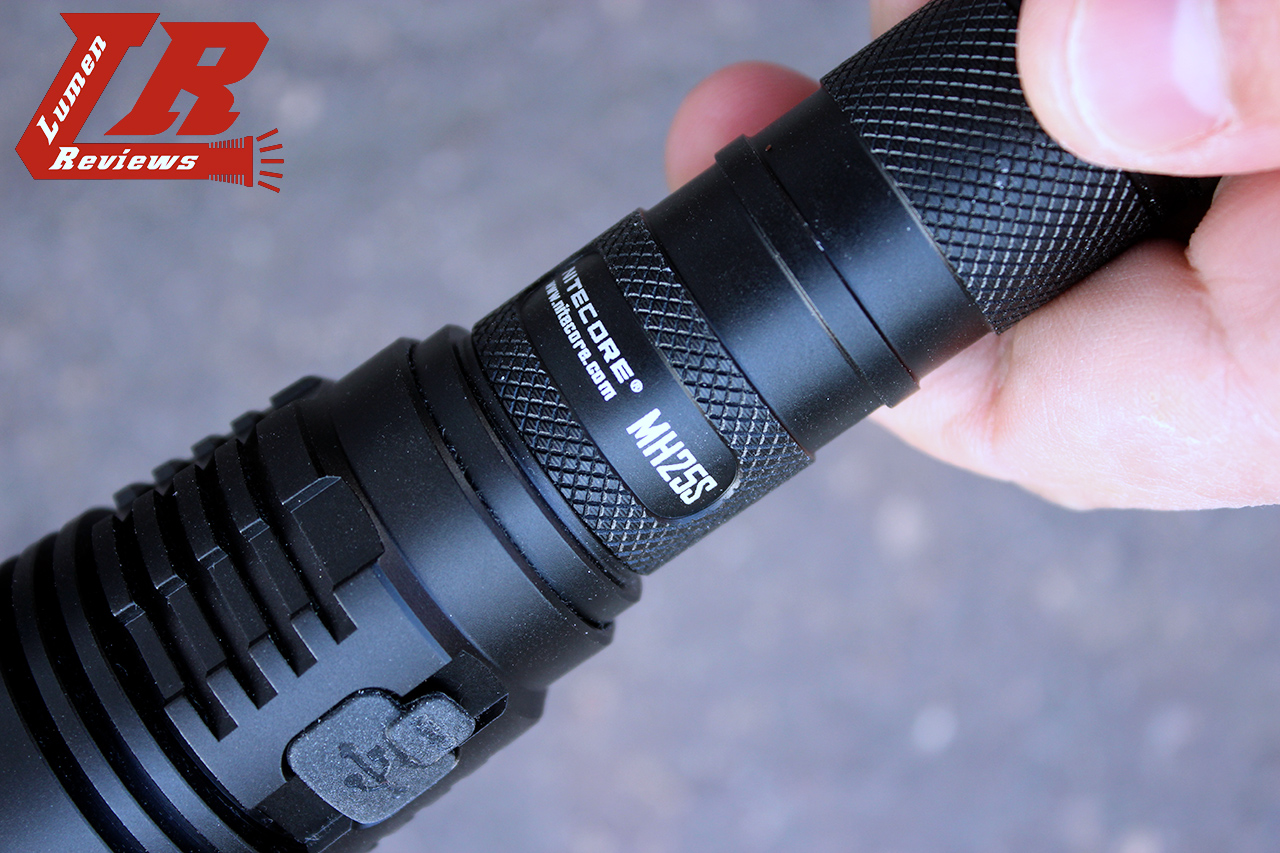 The positive contact point inside the head is a golden spring, allowing the MH25S to be mounted on rifles, and allowing use with flat top batteries.

The threads are trapezoidal cut and anodized, do physical lockout is possible. 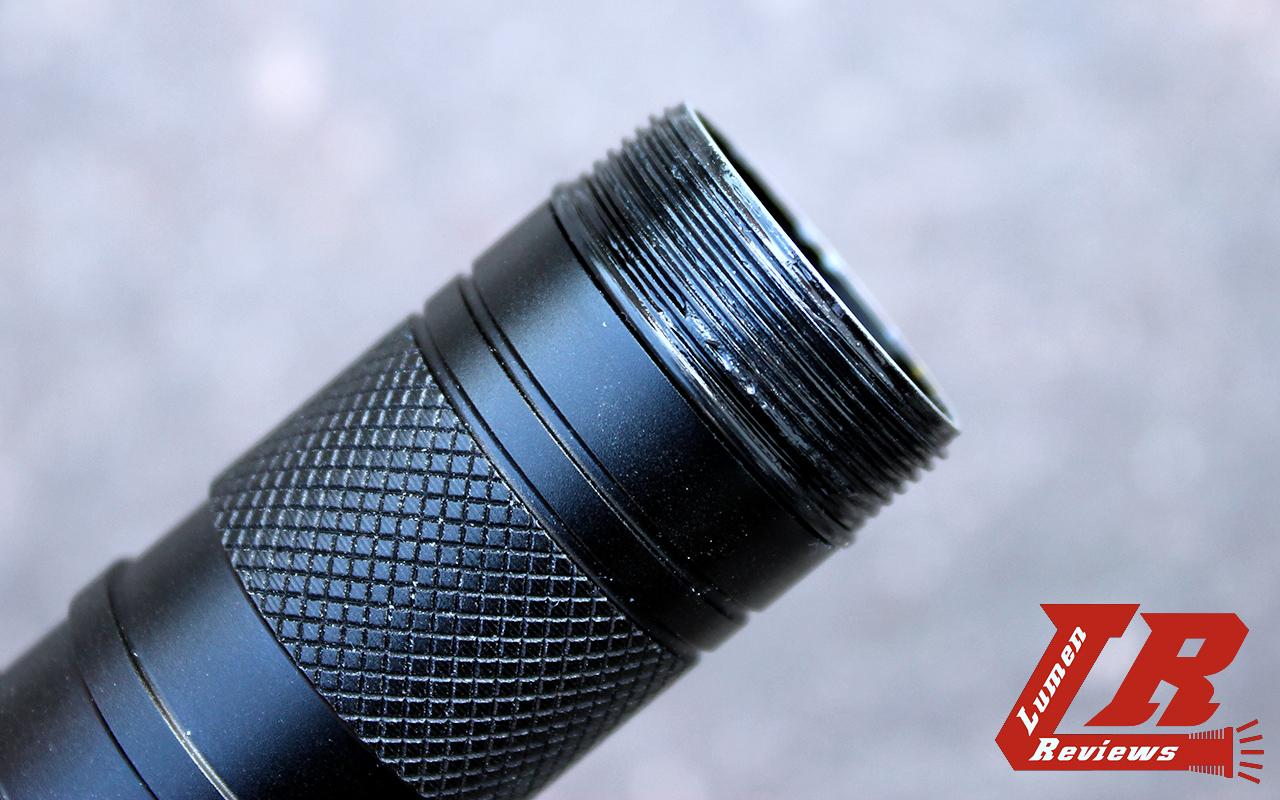 The tailcap has the same rhomboidal knurling seen on the body, and some vertical millings.
The mechanical forward switch at the tailcap allows momentary on, and is exposed for a bigger ease of activation. 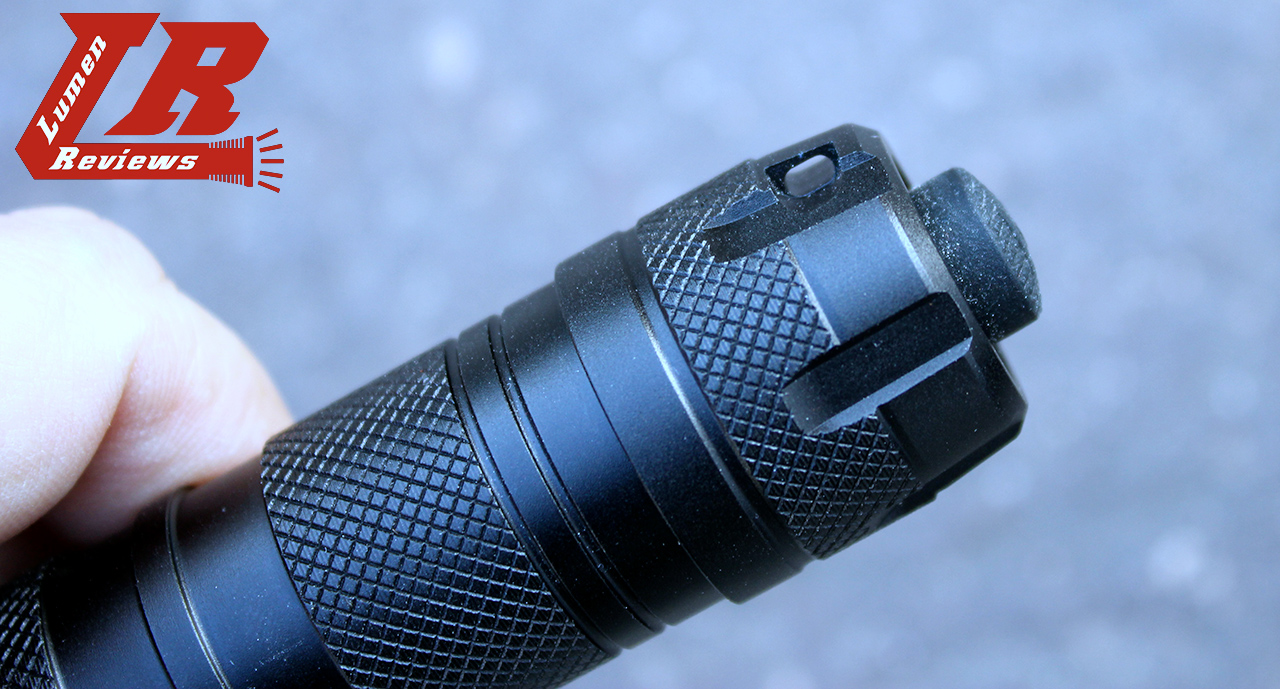 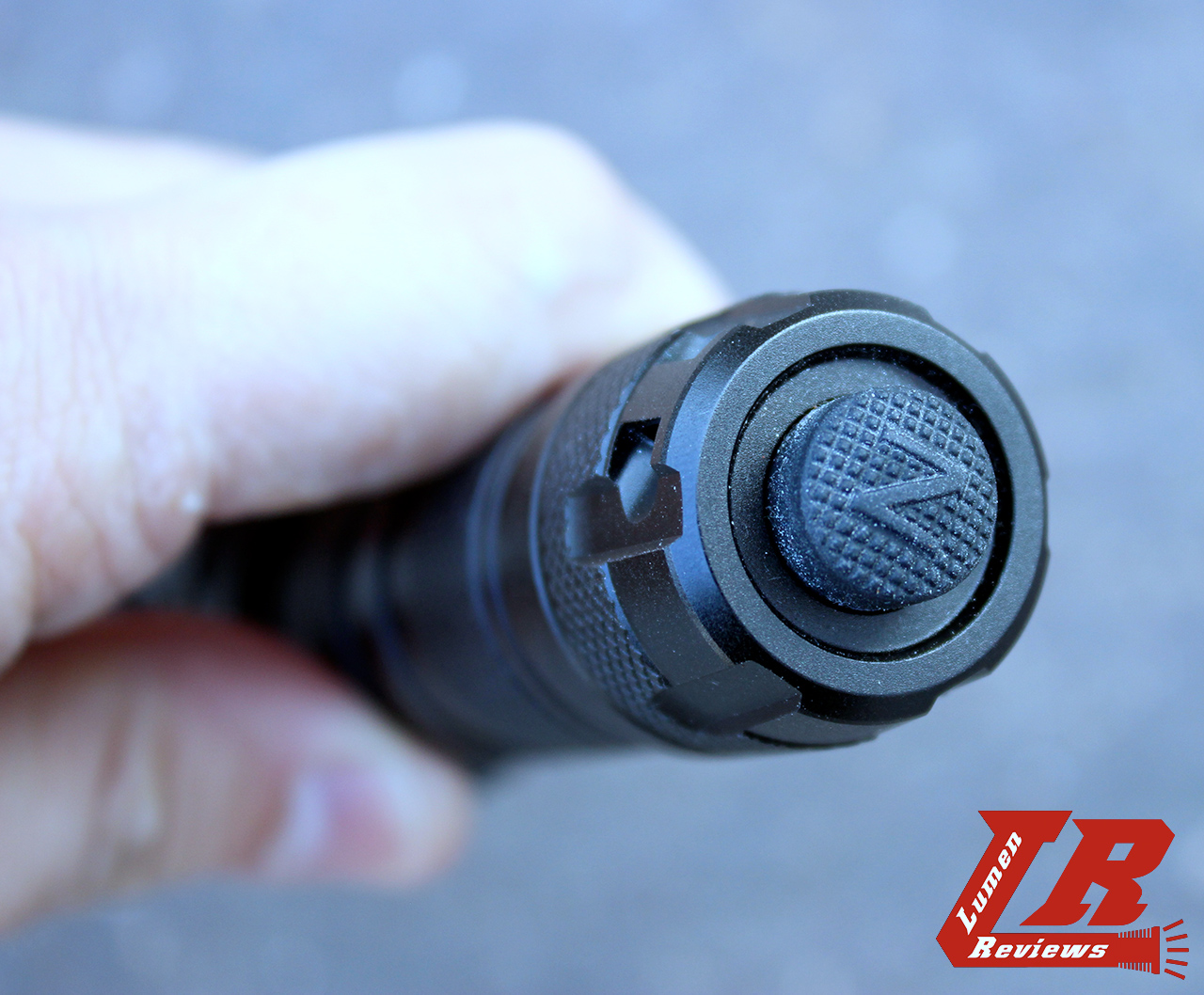 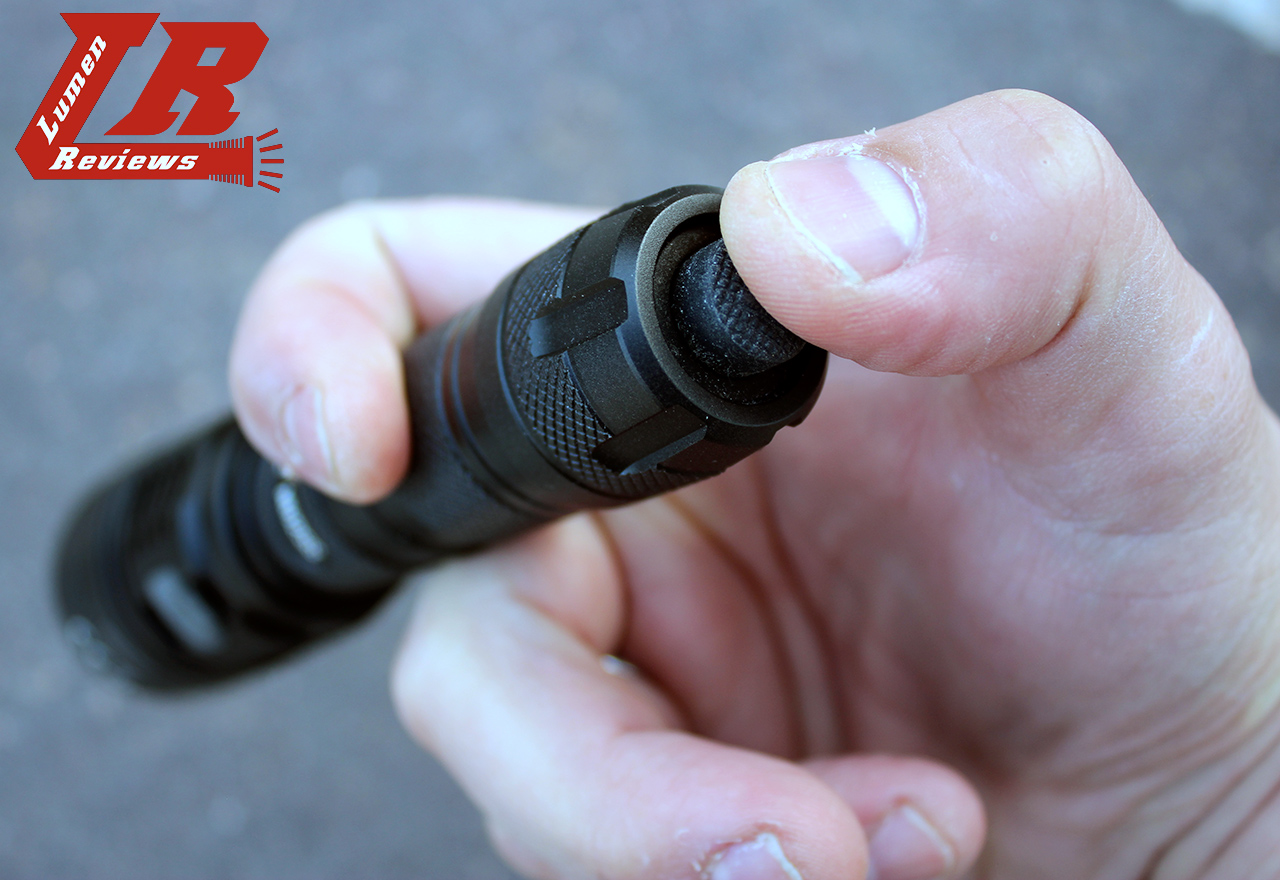 The sheath is made in cordura, with Velcro closure. It has a metal D-ring and is MOLLE compatible. 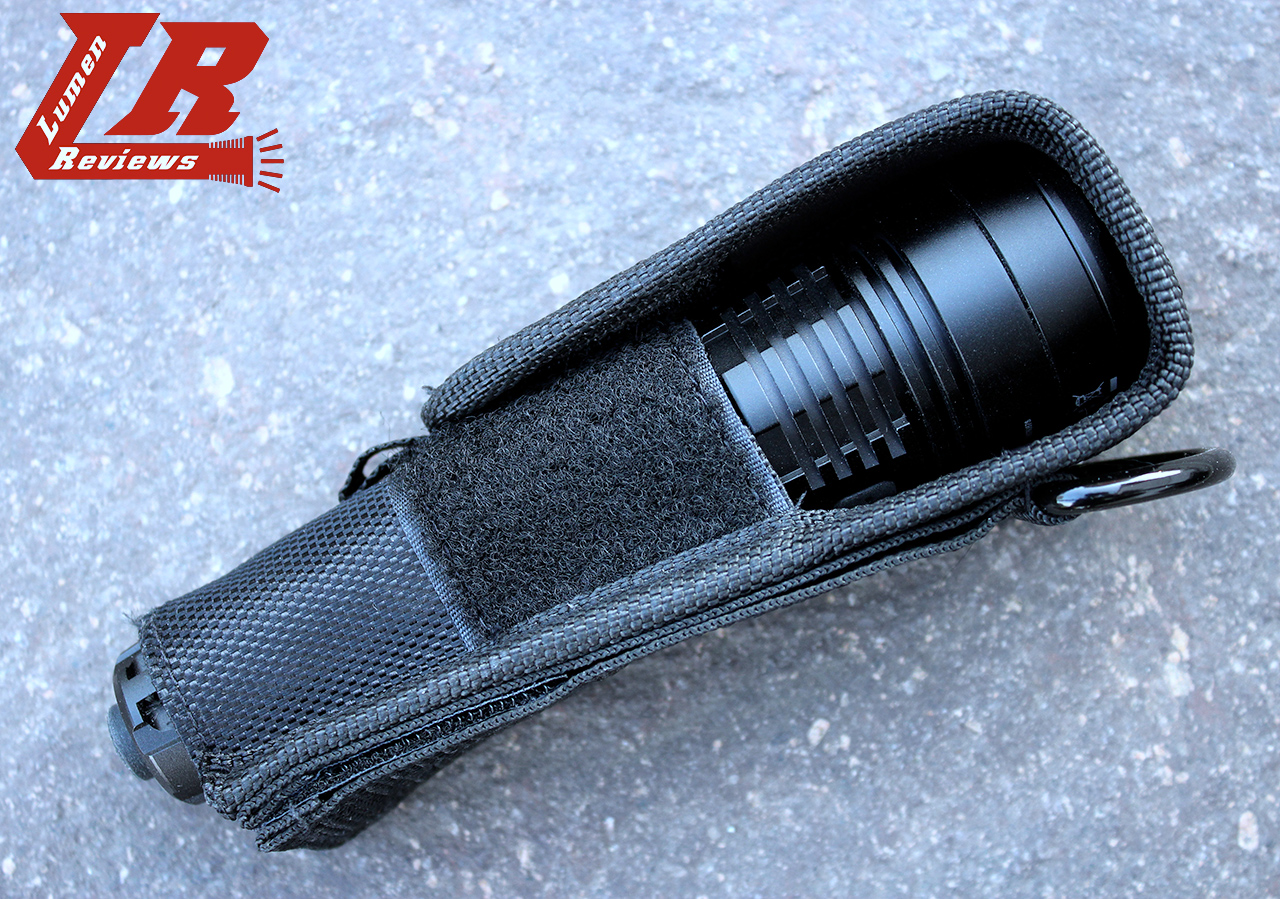 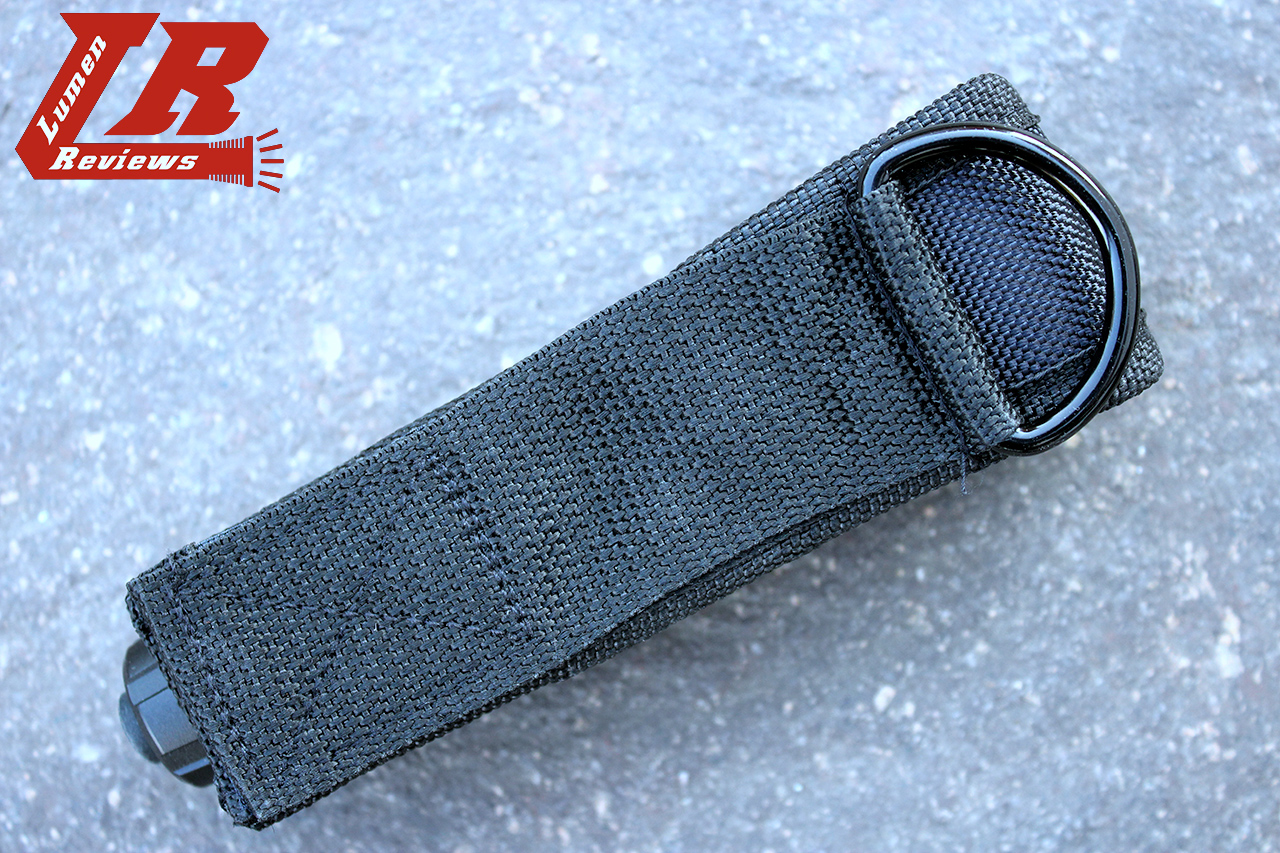 Beamshots
The trees are 100 meters from my position.
The small LED emitter in the larger than average emitter gives the MH25S quite some throw 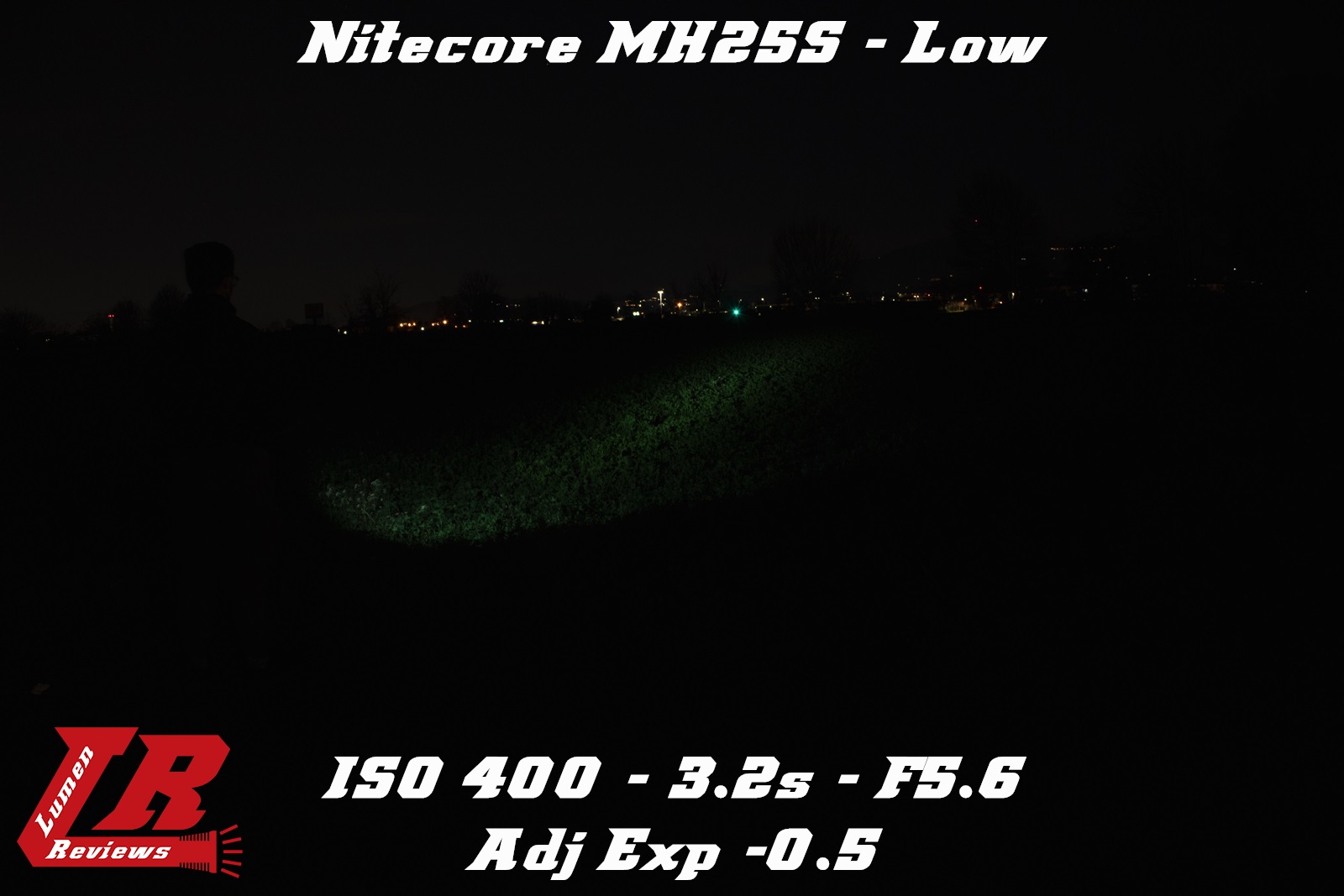 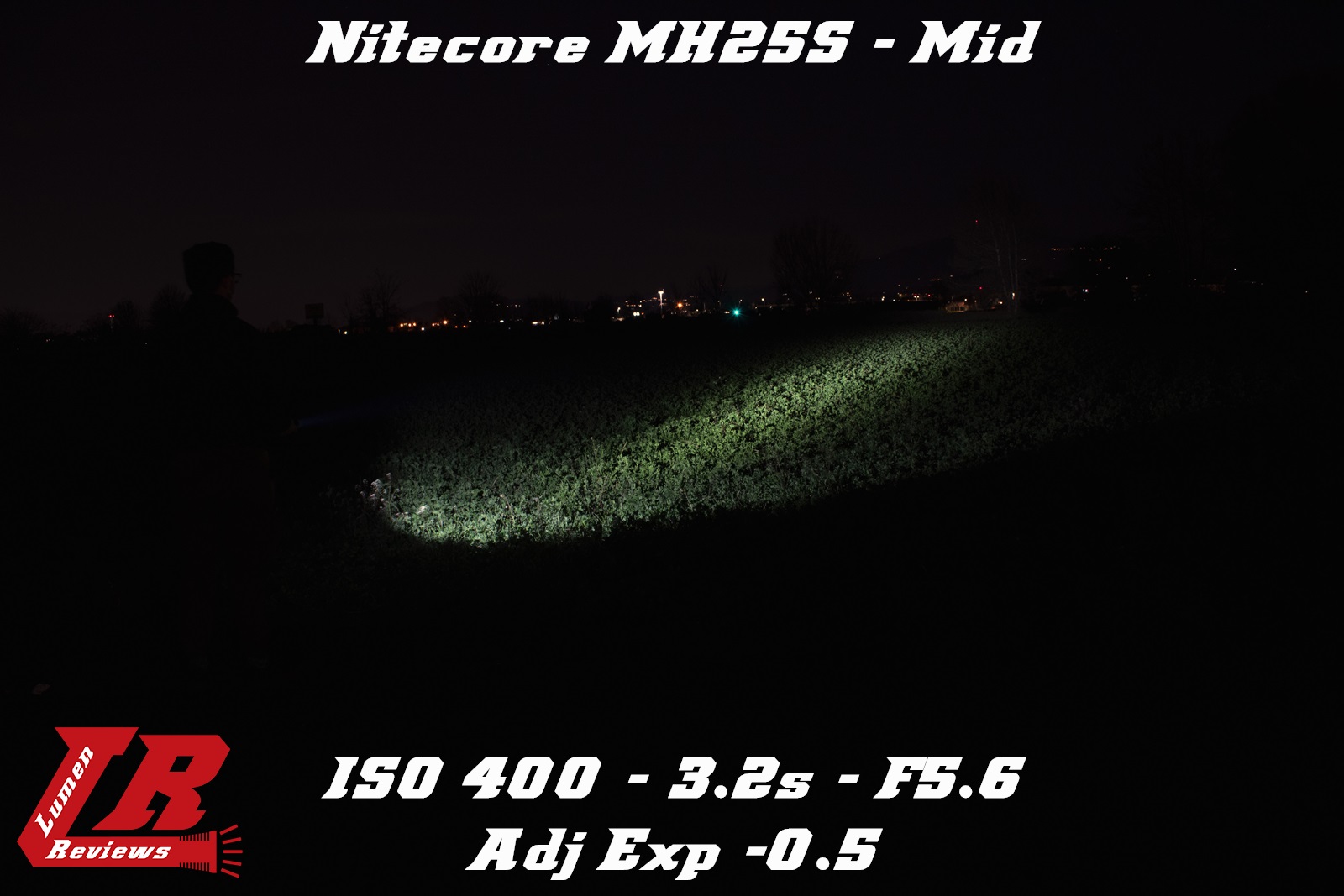 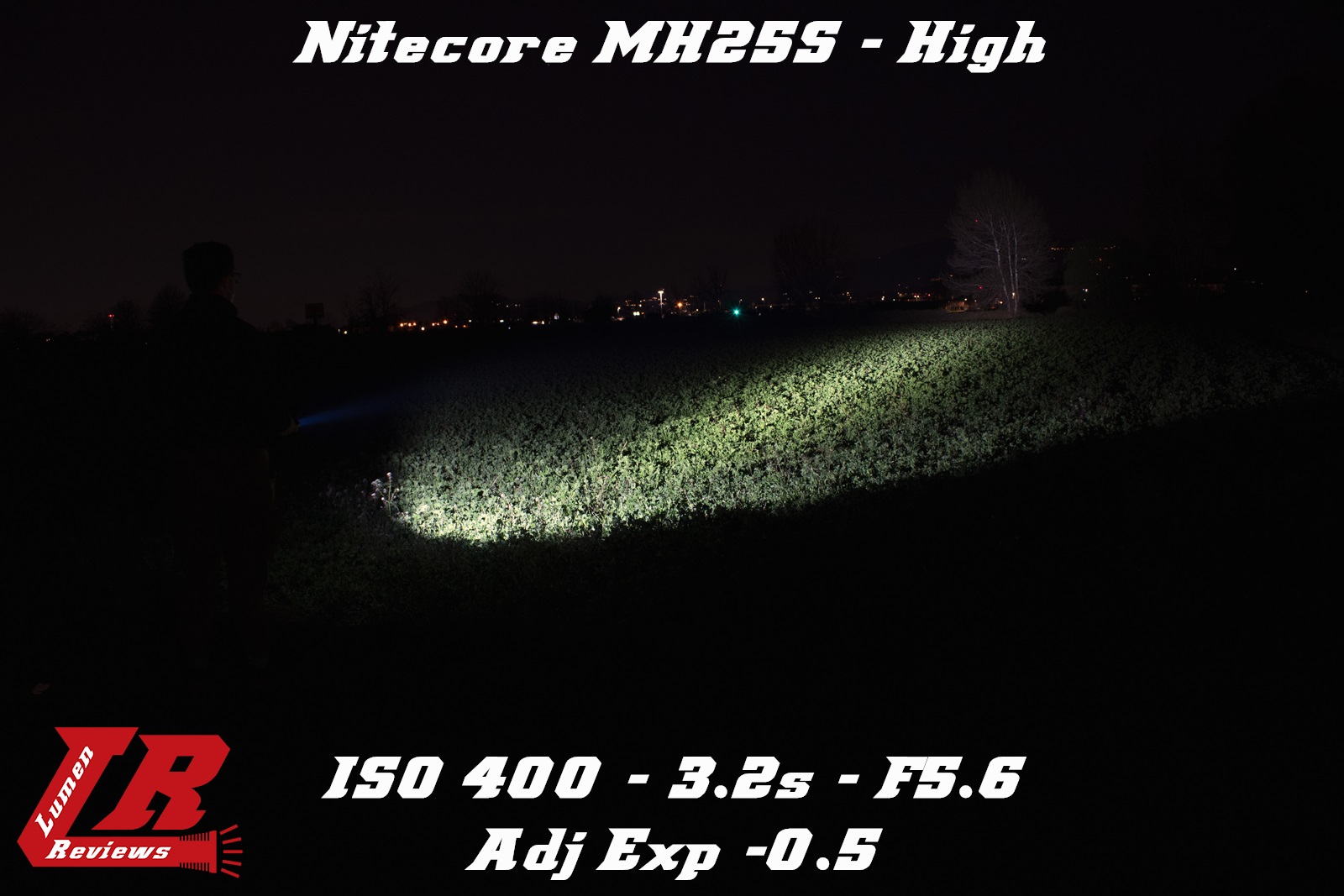 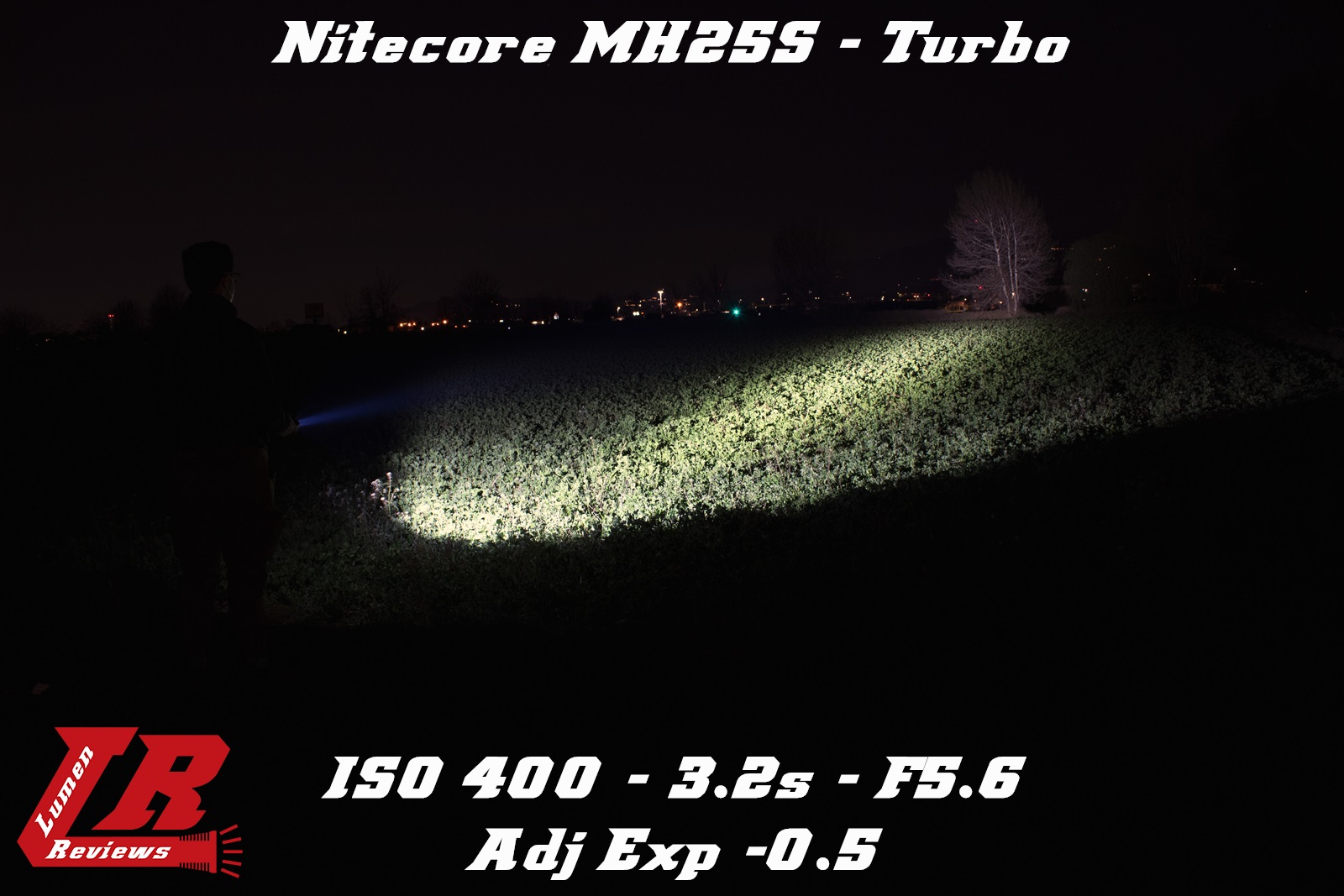 Output and runtime
Both measured with the provided 5000mAh battery 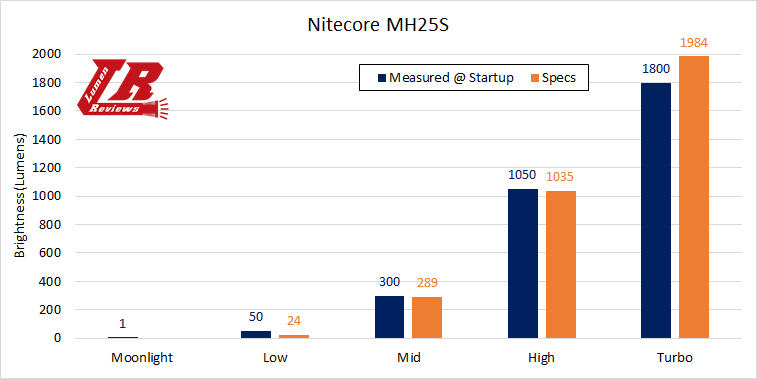 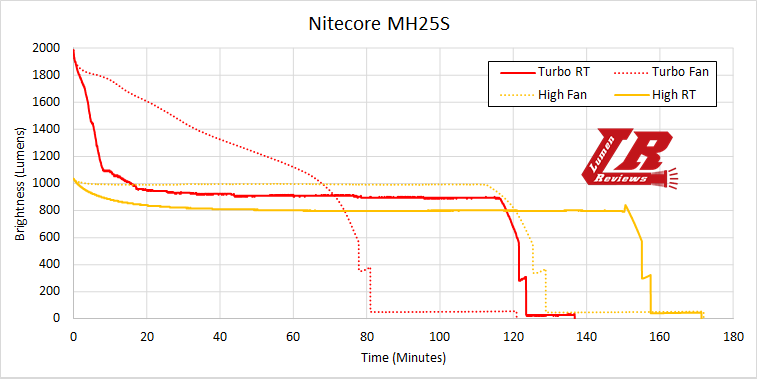 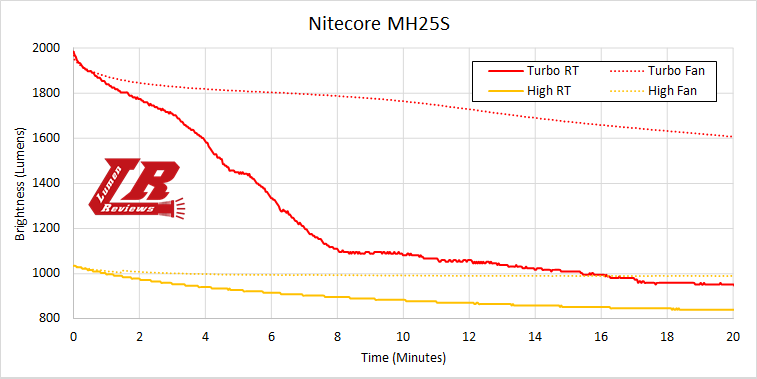 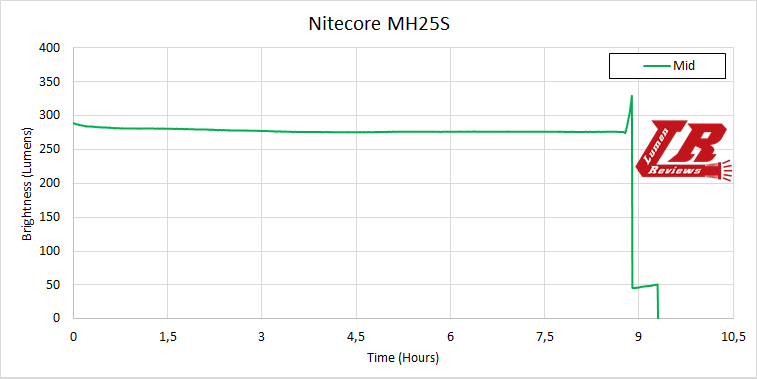 Here’s a thermal test of the light at turbo mode.


My thoughts
The light is well built and finished.
The levels are well spaced. There is a thermal sensor on the MH25S that limits the output when the temperature is too high, and it works well both at Turbo and High mode. I like that the thermal stepdown at High mode is not so massive, allowing the MH25S to run at more than 800 lumens for almost 2 and half hours. The regulation is flat on the tested levels.
The double UI can accommodate the needs of different users.
I wish the light had a quick access to lowest e/o highest mode.
I wish the MH25S had a battery status built into the backlit switch, and that it would stay on to better see the switch in the dark, since I find a bit difficult to find it because it is black and flush with the head surface.

If you need a light with above average throw, while maintaining a wide and usable spill, with a big battery, the MH25S can suit your needs.

Great review, bought this baby for $68 in Indonesia, really happy with this flashlight, amazing thrower, long lasting battery life, and compact size, 10/10 for me.

GeorgeTan said:
Great review, bought this baby for $68 in Indonesia, really happy with this flashlight, amazing thrower, long lasting battery life, and compact size, 10/10 for me.
Click to expand...