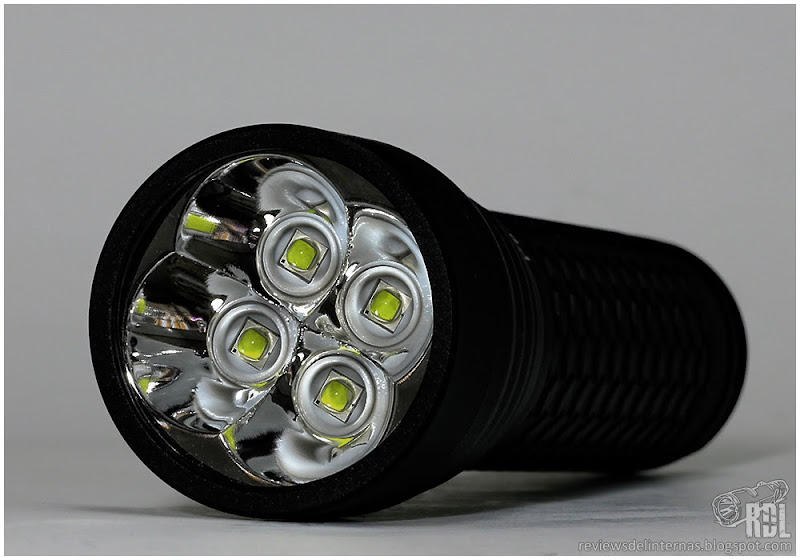 INTRODUCTION
TheOutdoorPlus.com is a new online store based in Asia that just embarked on its adventure in this disputed sector. Among the brands they sell, this Palmstar strikes as it is a flashlight tailor made by Niwalker for exclusively TheOutdoorPlus.com. 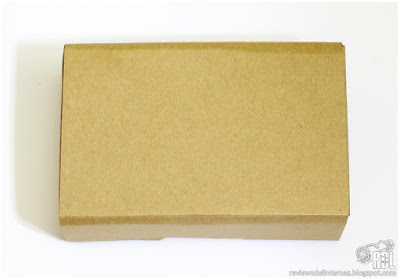 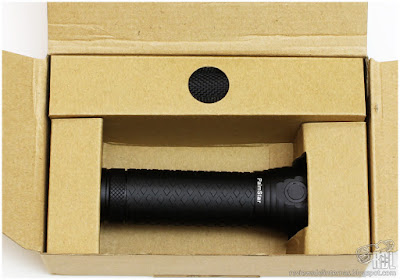 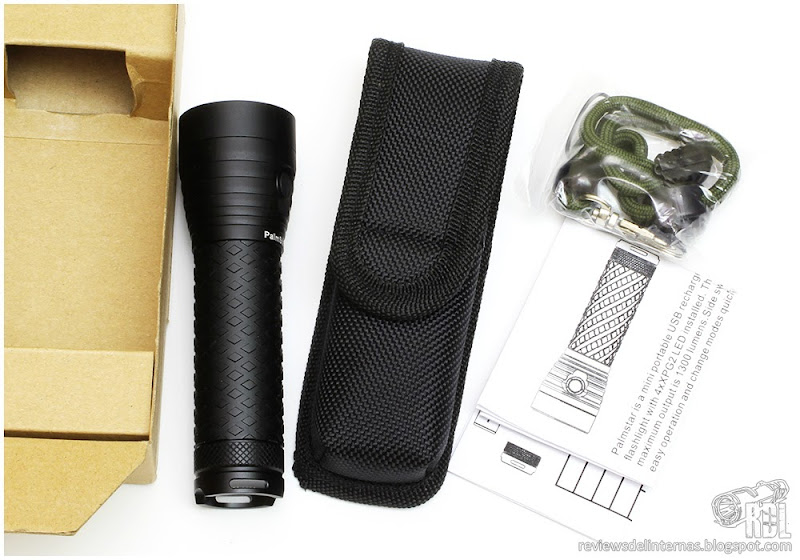 The presentation of the flashlight is almost identical to that which can be found in a Niwalker, with a cardboard box (this time without external adhesives) in which inside perfectly housed we find the flashlight, including a quality textile holster, a small plastic bag with a set of spare o-rings and a wrist strap, plus an instruction manual in English.


EXTERNAL ASPECT
The light looks quite cool and peculiar. It is made of matt black anodized aluminum. 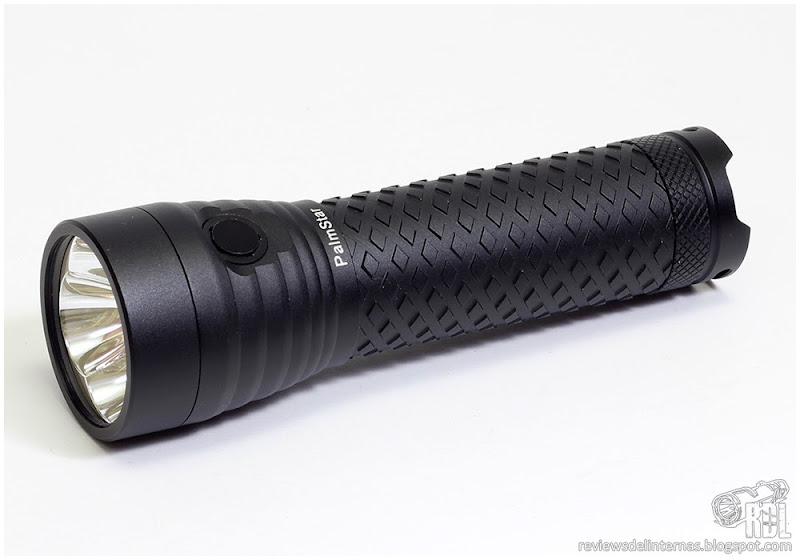 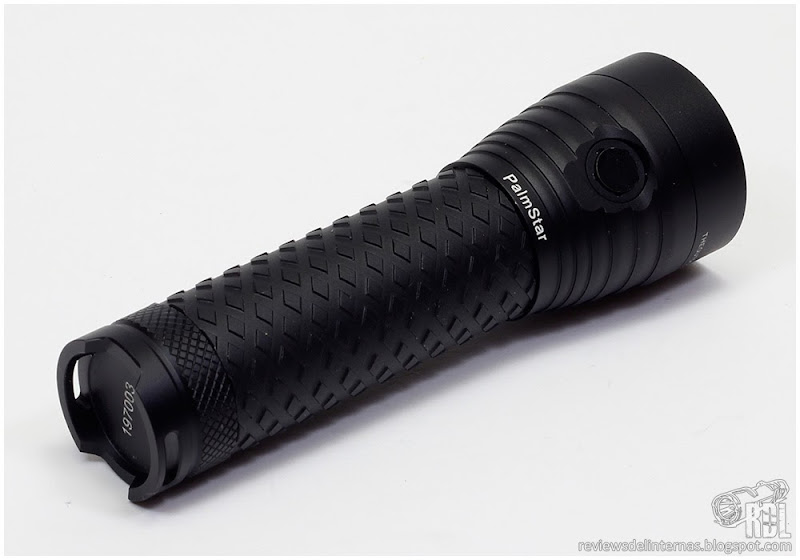 Broadly speaking, we are dealing with a multi-emitter flashlight with a very compact built-in charger, with a length of 109mm, a maximum diameter of 33mm and a weight (without battery) of 88 grams.

The head of the flashlight is slightly oversized to accommodate a very interesting CREE XP-G2 four-emitter system with partially overlapping parabolic reflectors. 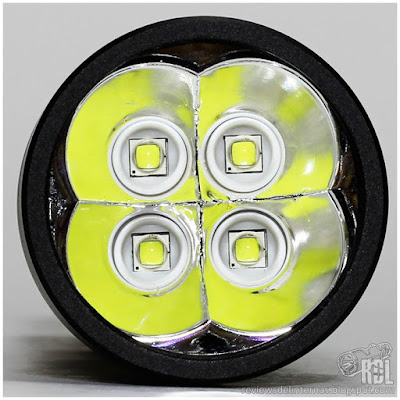 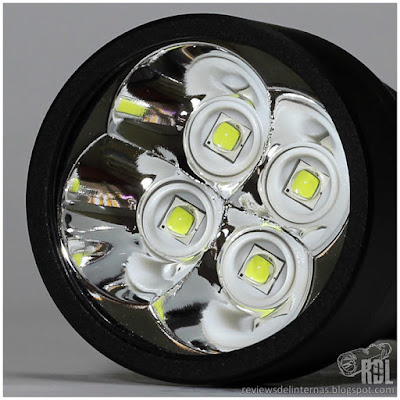 The bezel is anodized aluminum and glass lens has anti-glare treatment. The reflector is smooth, and the four emitters are perfectly centered. The appearance of the optics is clean and very well resolved, and as an interesting detail for those who like the modifications, the bezel is not sealed. 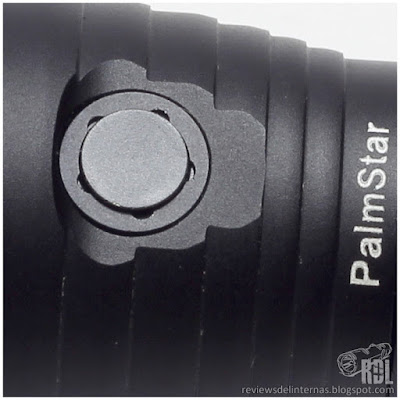 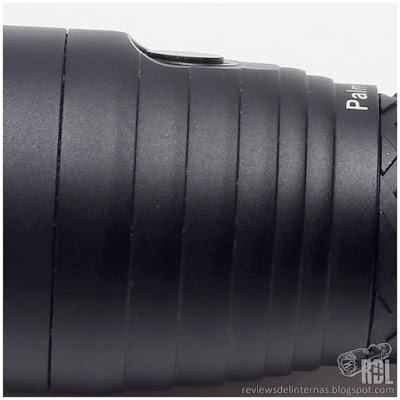 The shape of the head is simple, smooth, free of dissipating fins or sharp angles. On the side we find the digital switch by which we will control all the functions of the flashlight. It is covered by a button of the same material as the flashlight, and they have placed it in a small plane mechanized for this purpose. In practice it is a bit difficult to locate it by touch as it barely protrudes, remaining within the profile of the flashlight. 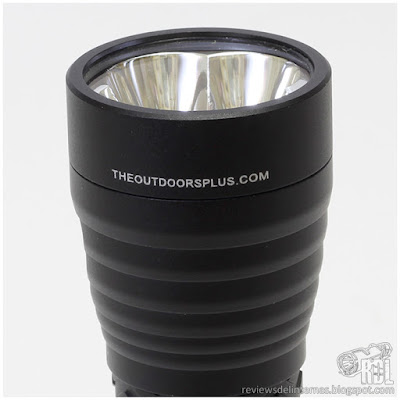 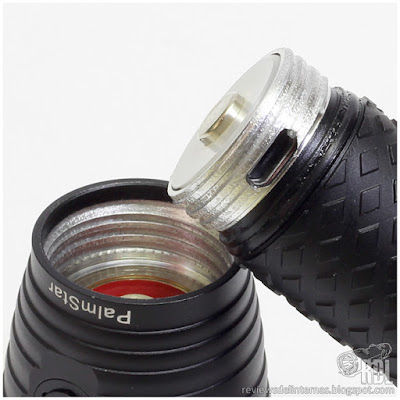 By removing the head we access the recharging port, in microUSB format, hidden between the threads.

The central tube has an original rhomboid knurling, which give the flashlight a very good hand feel and a fairly good grip. 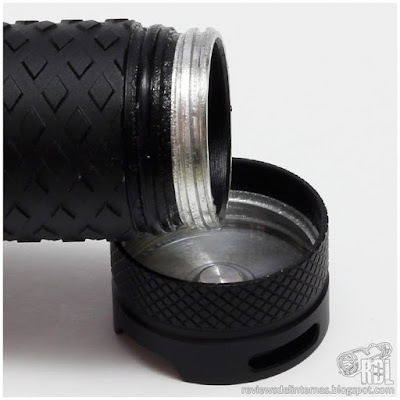 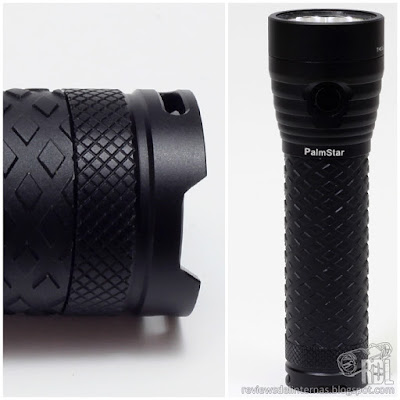 The threads have trapezoidal cut, and lack anodizing in both ends.
The space available for the battery is rather small, so long protected batteries do not enter by length. Cap of tail has no spring, which has been replaced by a pivot machined directly into the aluminum. The positive contact has a spring, so the batteries can be button top or flat top. The tailcap design allows the flashlight to be placed steadily in tailstand.


USER INTERFACE
The user interface of this PalmStar is very similar to what can be found in the latest models of Niwalker, with 5 different levels and three hidden strobe modes, plus some interesting shortcuts. 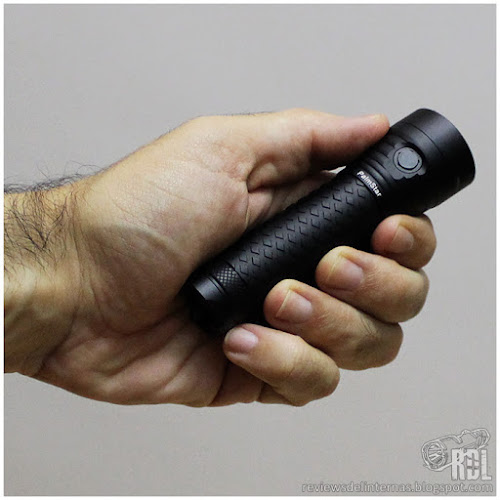 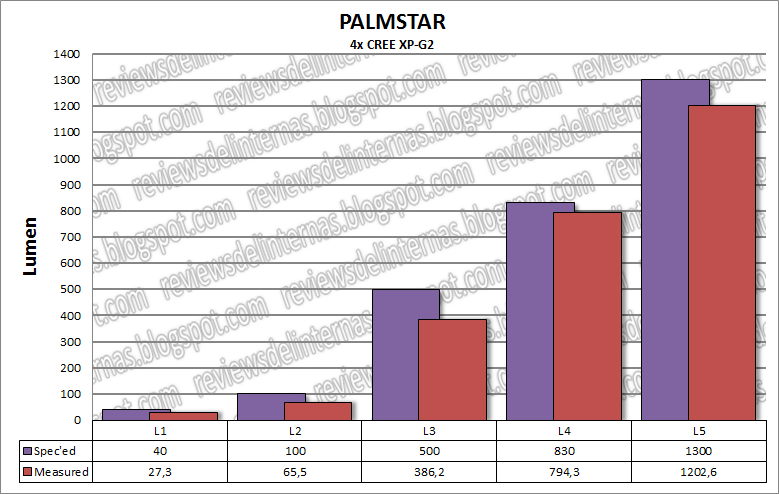 (All measurements are taken following the procedure ANSI NEMA FL1, taking as value the highest reading between 30 and 120 seconds after activation. More details here.)

The distribution of modes have, in my opinion, lot of room for improvement, since between L4 and L5 there is very little visual difference, while L1 may be too high for some tasks. In general the concordance between the specified and the measured is acceptable, with slight differences downwards in all modes. 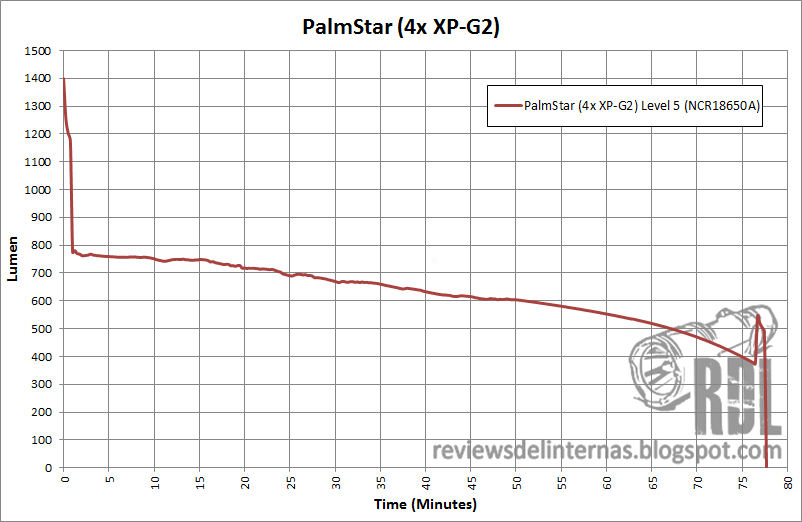 Level 5 has a temperature-controlled stepdown, which monitors the internal temperature and reaches a specific temperature, reducing performance by one level to keep the electronics from overheating, as well as helping to achieve superior efficiency. The curve is quite interesting, since we have a few minutes with a performance above 1200lm, stabilizing around 750lm after the stepdown action, and from this point the flashlight seems to maintain a slightly decreasing regulation , To the point where it seems that it tries to raise again the level that has gone down to later to be completely shut down. 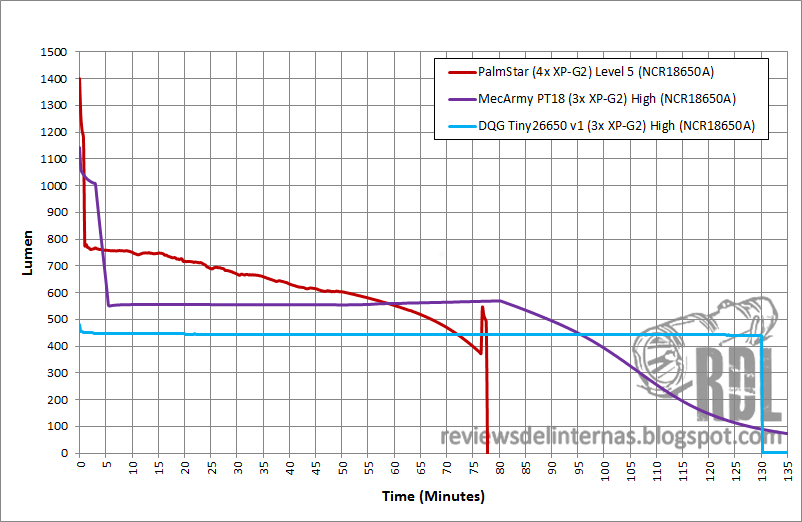 If we compare the curve with that of other similar flashlights, such as the MecArmy PT18 (with three emitters XP-G2) or the already discontinued DQG Tiny26650 v1 (also with three XP-G2) we see how its regulation is in an intermediate point, And we can also appreciate how his runtime is far from the other two, even counting the PalmStar with an extra LED emitter.


EFFICIENCY
After analyzing in detail the efficiency obtained on the previous test, I have to confess that I was quite dismayed because on paper I expected to be before the new queen of its category, but it is not so: (More details of how this calculation was made here.)

The efficiency calculated lm·h lags behind the other two alternatives, either cut to 10 or 50%. It is a real shame as we are facing a flashlight that would play to advantage thanks to that extra LED emitter against MecArmy or DQG. I have also added, as a comparative curiosity, some examples of calculated efficiency for single-emitter flashlights.


BEAM PROFILE
The small optic with a quadruple overlapping reflector is, inevitably, to produce some aberrations in the beam profile of this flashlight. These aberrations are caused by light escaping from the “own” parabolic reflector and baing bounced by a “foreign” one.

The beam is very open, turning this flashlight to a maximum throw (according to specs) of 282m. A compact ultra-flooder best suited to illuminate large areas at short-medium distance.

A point to emphasize is the tint, in my opinion, excessively cool white. 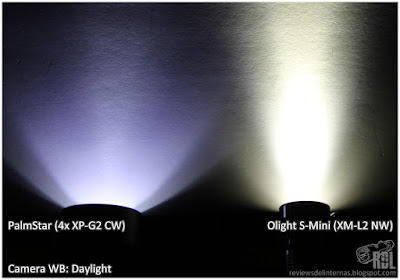 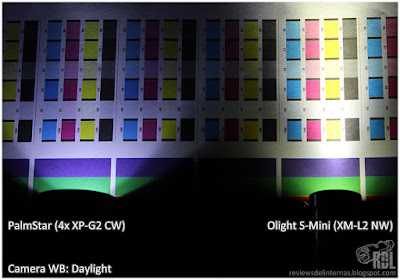 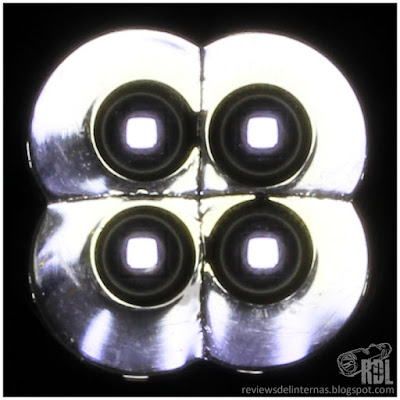 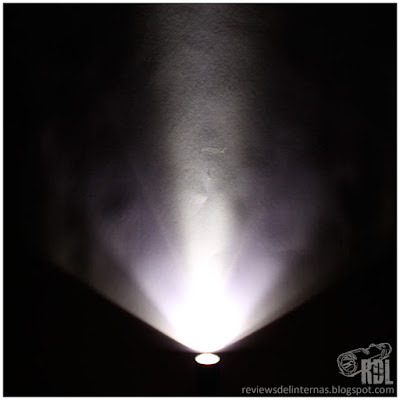 PERSONAL CONCLUSION
The PalmStar has left me feeling somewhat conflicted, since on the one hand it shows some details of quality of a “premium” brand as it could be Niwalker, but on the other it seems not to take advantage of the efficiency of the combination so interesting (in my opinion ) of a regulated quad-LED to a moderate output. 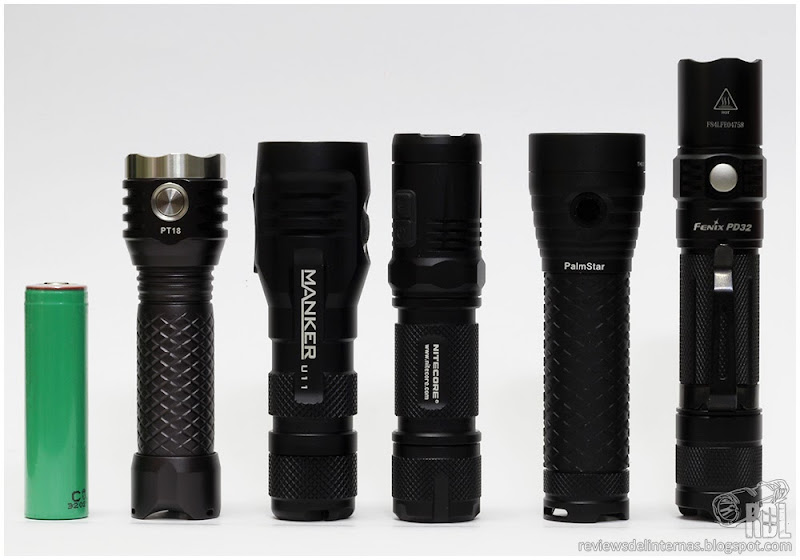 Negatives: As I just mentioned, the low efficiency has made it surprised me because on paper the configuration of this PalmStar, with four emitters and a maximum moderate output, should have obtained the best efficiency calculated not only of the multi-emitter , But of course that of a simple emitter, and as we have seen this flashlight is quite far. The user interface, practically identical to the one used in the Niwalker MM25MB, has the disadvantage of specifying the mode selection in the first second after the ignition, requiring a power-off to change modes if we are already using the flashlight. The distribution of modes, in my opinion has a level that is left over (L4, “830lm”) and needs a lower one, something around 3 ~ 5 lm. The dye is in my opinion excessively cold. Although I am not one of those who use protected batteries, the space to accommodate the 18650 is so extremely fair that even some not protected with button top added gets something forced.

Positives: I really like the feel of the flashlight, with the knurling so original in its tube. In general, I consider that the aesthetic design is quite attractive with simple and non-aggressive lines. Even with a flashlight with four emitters it is relatively very compact and short, and can be perfectly carried in a pocket. The recharge function can be very useful for people who do not want to go through the hassle of using an external charger if they use the flashlight sporadically, and having a microUSB make it compatible with most power adapters. Smartphones, tablets or other devices we use daily, so finding a recharge point will not be very difficult.

PalmStar sample provided by TheOutdoorPlus.com for test and review. Thanks!​

I love your reviews