A good point about the handiness of ZL, but this beam tint with what can be a really simple interface is also a winner for potentially many. Simply click and hold to ramp up from the floor. Let off at desired luminosity. Double click to get ceiling.
Now if a person gets to clicking by mistake or willy nilly; that would very likely require a perusal of the manual. (unless you are Jedi to the ways of this flashlight)

I just really appreciated the additional flashlight tips in the manual as well. Many of us already knew them, but it is good to see it available for newer users.

Yea as for the FW3A interface, I guess they were trying to please everyone, which needed to be done I guess. Myself, I really only need two brightnesses - the brightest-sustainable, and the brightest-possible. All other UI tricks are just clutter to me.

Does anyone know the bin name for the emitter in the OP? It was from illumn.com
I

joshk said:
Does anyone know the bin name for the emitter in the OP? It was from illumn.com
Click to expand...

I don't think Lumintop ever explicitly stated, but the suspicion is, and your test results are consistent with FD2: 3875-4000K and roughly +0.001 duv to -0.003 duv (eyeballing from the chromaticity bin diagram in the datasheet).

For a while after they were introduced, it appeared that FB4 was the primary tint bin available, which is fully above the BBL. A few months ago, an undisclosed manufacturer sent a flashlight community member a few samples of FD2 and FA3 to test. The FA3 in particular were reported to be good, but also very limited in availability. After that, FD2's started becoming more available.

I like to think, although this is just speculation, that while Luminus initially focused on maximizing luminous efficacy, accepting green tint as a tradeoff, interest from the flashlight community, in particular through high volume orders from Lumintop and Astrolux, convinced them to start producing nicer tinted batches.
J

iamlucky13 said:
green tint as a tradeoff
Click to expand...

I agree, most LEDs that are brighter than N219b are also greener, here is a good example.. I dont know the lumen differences 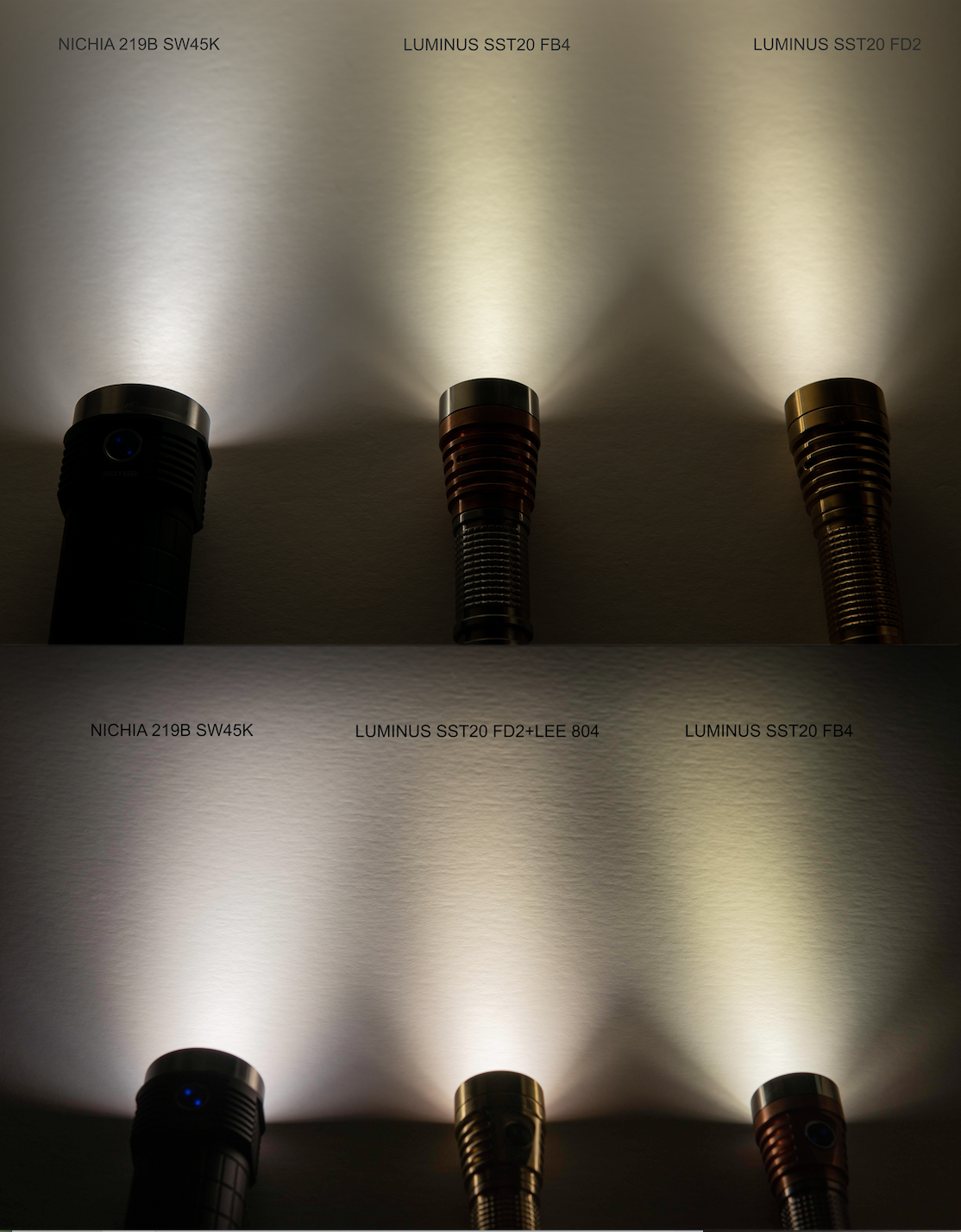 Looked at a Nichia Emisar D4 tint and it is more appealing than the SST-20 for many folks here, but really only when compared side-by-side.

Speaking of green. To me the bad thing is tint shift from rosy to green across the beam. The single worst thing as far as beam quality is concerned. Apart from that I strongly prefer green over magenta. Green is natural daylight color while rosy/magenta is not natural at all

I haven't seen that in my flashlight.
There's probably not much you can do about rosy, but you apply some Green Delete to fix the green tint.
M

You cant fix the tint *shift* with a filter. There are however a few LEDs that have no tint shift whatsoever. Among them are: nichia 83a and Optisolis

ma tumba said:
You cant fix the tint *shift* with a filter. There are however a few LEDs that have no tint shift whatsoever. Among them are: nichia 83a and Optisolis
Click to expand...

You can with this. It's a liquid paint. You can air brush it on just the center or outside ring of the lens. Whatever you need.
M

I understand what you mean.

Sweet! The lovely 18350 tubes, SS bezels and deep carry clips are in ! I'm still admiring the easy ability to alter this torch. Ramping too fast or too slow? Change it. High, too high? Change it. Found a old flip up red filter for it too.

Craig at Illumn wrote back to me after I explained to them the issue with the FW3A, saying to remove the head, then unscrew the tail section partially then tighten the tail firmly and reinstalling a battery. This did fix the non-functionality of my unit. I am glad I did not have to disassemble the tail section, and once again appreciate the service from Illumn.
C