The Haikelite HT08 Mini was purchased using a gift voucher won in a CPF giveaway run by GearBest. No other payment was received for this review, and I do not receive any commission from links or sales from this review.
Product page: https://www.gearbest.com/led-flashlights/pp_900413.html
Code for 12% off: GB17LED


The compact zoomy light market (with a few exceptions) is divided between cheap and nasty $2 aspheric lens lights (sometimes sold for much more, with ludicrous lumens ratings), and the optically good but somewhat overpriced TIR lens lights from Ledlenser, Coast, and Walther Pro. The Haikelite HT08 fills in a gap in this market, with an 18650 based zoom light, using a genuine 5000k neutral white Cree XP-L emitter, and unusually, with a Fresnel lens. A Fresnel lens reduces the amount of material required compared to a conventional lens by dividing the lens into a set of concentric annular sections. Whilst Fresnel lenses are rare on flashlights, they are commonly found in lighthouses and theatre lighting. Lets see how the Haikelite HT08 performs? 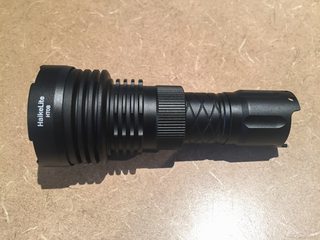 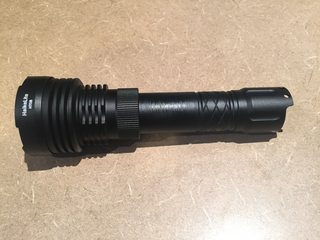 
The Haikelite HT08 arrived in a padded cardboard box, which contained the HT08, spare O-rings, and a high quality lanyard. There were no instructions included. 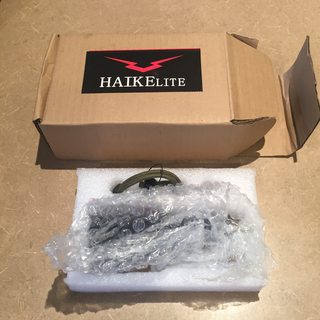 
The Haikelite HT08 is a compact 18650 zoom light, with a similar size to the non-zooming Convoy C8. As with other Haikelites, the construction is quite solid. The HT08 has a large(ish) zoom head with a diameter of 45.5mm. There are lots of fins on head to dissipate heat, however as the LED is on the body, there is only a short section of screw thread allowing for contact between the body and the head for heat transfer. Thus the body warms up fairly quickly, and the light was uncomfortable to hold on high after 10 minutes.


The zoom mechanism works by screwing/twisting the head. The mechanism was quite smooth. There is quite a lot of travel to move between flood and throw, and thus it is not possible to quickly move between one or the other like on Ledlensers (8secs vs <1sec). However, at least the head stays fixed at the zoom position at which is was last left, which can be very useful.


There is a single tail switch - user interface is explained in the next section. The tail cap can be unscrewed for battery insertion. There are springs at both ends of the battery tube, and thus the HT08 accepts button top and flat top 18650 batteries. Long protected batteries should fit based on the X-ray image (with a 67.3mm long 18650). The battery tube thread is not anodised and thus the light cannot be mechanically locked out by turning the tail cap. 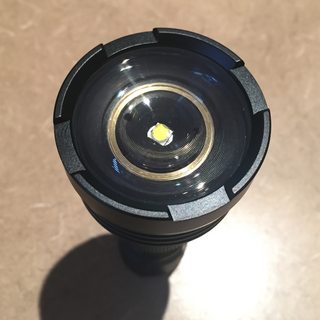 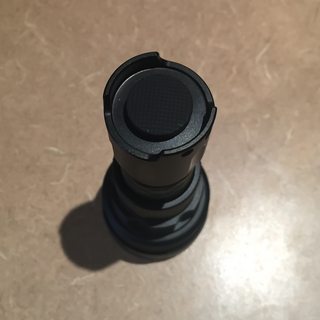 
The Haikelite HT08 has a tail switch which works with half and full clicks (as per the Convoy S2+). There are 5 mode groups, which are as follows:
Group 1: Single mode
Group 2: Low / High
Group 3: Low / Medium / High
Group 4: High / Strobe / SOS
Group 5: Moonlight / Low / Medium /High / SOS
5 half-clicks are required to enter programming mode. The mode is then selected by clicking the light off after the number of flashes denoting the mode group.
8 half-clicks are required to toggle memory on/off.


There is no momentary functionality, which would be useful in light like this.


As previously mentioned, this light is fairly unique in that it uses a Fresnel lens, instead of aspheric lens (as found in most budget zoom lights) or TIR lenses (as found in more expensive zoom lights such as Ledlenser, Coast, and Walther Pro). In fact, there are two lenses, an AR coated C8 style lens, and the Fresnel lens below.


At the flood end, the beam is fairly even in brightness, with a very wide angle. In fact this is by far the widest angle I’ve seen on a zoomy light. There is a little bit of yellow tint shift at the corona which is usual for zoom lights. The corona is not as noticeable as on the XP-G3 based zoom lights.


At the throw end, there is a very small hotspot, but also lots of ring artefact from the Fresnel lens. This artefact is barely noticeable when in real world (outdoor) conditions. The small hotspot may be useful for refractography. The LED is projected slightly out of focus. This, and the choice of LED means that is no funky colour mottle effect like on an XP-G3 based zoom light I recently reviewed.


In between the two, the beam is always fairly even, and the ring artefact varies at different parts if the zoom.


The 5000k tint is pretty much perfect, white with a tiny hint of yellow. The corona is yellow. There is no hint of green, purple, or blue. A neutral white zoom light is a rarity, and Haikelite have done well with the tint. This is miles better than the awful purple tint on my Ledlenser P7.2.


The CRI appears to be in the usual low 70s, which is good enough for most purposes.


The claimed output on high is 850 lumens at wide angle. I was only able to record 675 lumens. At throw, I measured 175 lumens (as light is lost within the light due to the large distance between the emitter and lens), and estimated 17,500cd. Thus despite a small hotspot, the throw is far less than a dedicated, similar sized thrower such as the Convoy C8. Moonlight/Low/Mid/High modes were recorded at 1/26/66/100% respectively.


No automatic step down was observed during 10 minutes of runtime on high, at which point I decided the light was getting too uncomfortable to hold, and manually stepped down. I personally prefer user controlled step-downs, but this does mean that the user needs common sense and should not leave the light on high unattended. Run-time tests are a work in progress.


PWM could not be detected in any modes via iPhone video (which usually picks up PWM), so there is either no PWM or it is very fast.

In comparison beam shots, the Haikelite HT08 is on the left, and Ledlenser P7.2 on the right. 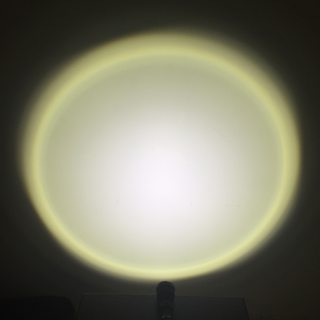 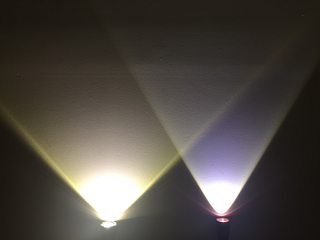 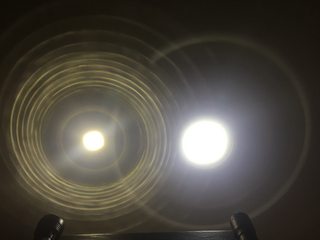 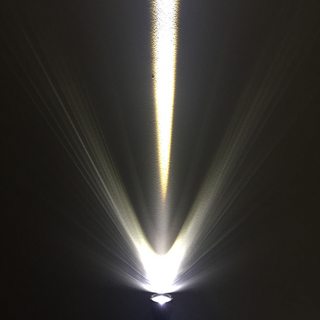 
Things I didn’t like:
Cannot quickly change from flood to throw - requires a lot of screwing with 2 hands!
Head too large for common light painting connectors
Ring artefacts at zoom/throw and some intermediate positions
No momentary functionality
No mechanical lockout
Output less than claimed.
Poor throw compared to C8 lights
No instructions in packaging


This Haikelite HT08 Mini is quite possibly the best zoom light in it’s price range US$15-$30. It has the largest zoom range of any zoom light I’ve seen. The neutral white tint is excellent, I like the fact that it stays in zoom position, and has a choice of mode options. However, this light is far from perfect. The output is less than claimed (though still not bad), and cannot compete with C8 lights for throw. It takes around 8 seconds to move from flood to throw, and there is no momentary functionality or mechanical lockout. Thus this light may suit some users of zoom lights, but not others