XTAR is a manufacturer who focus on the battery chargers. Its products have always been aimed at high performance and reliability. I bought a VC8 charger, which can charge 8 pieces of 21700 batteries at the same time. 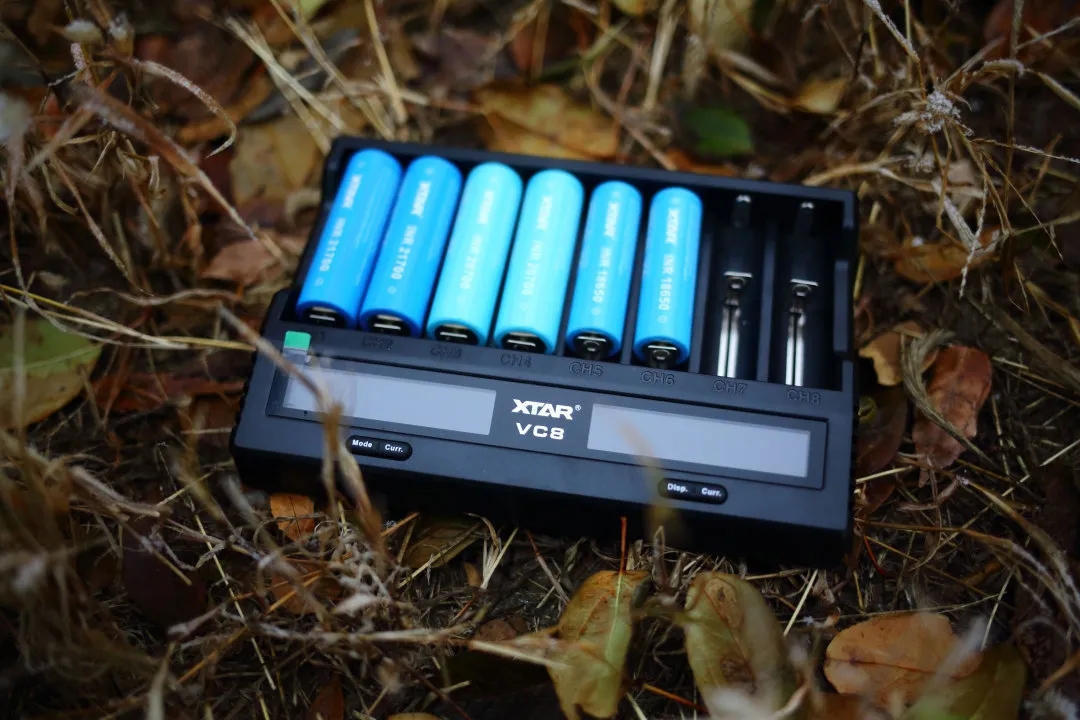 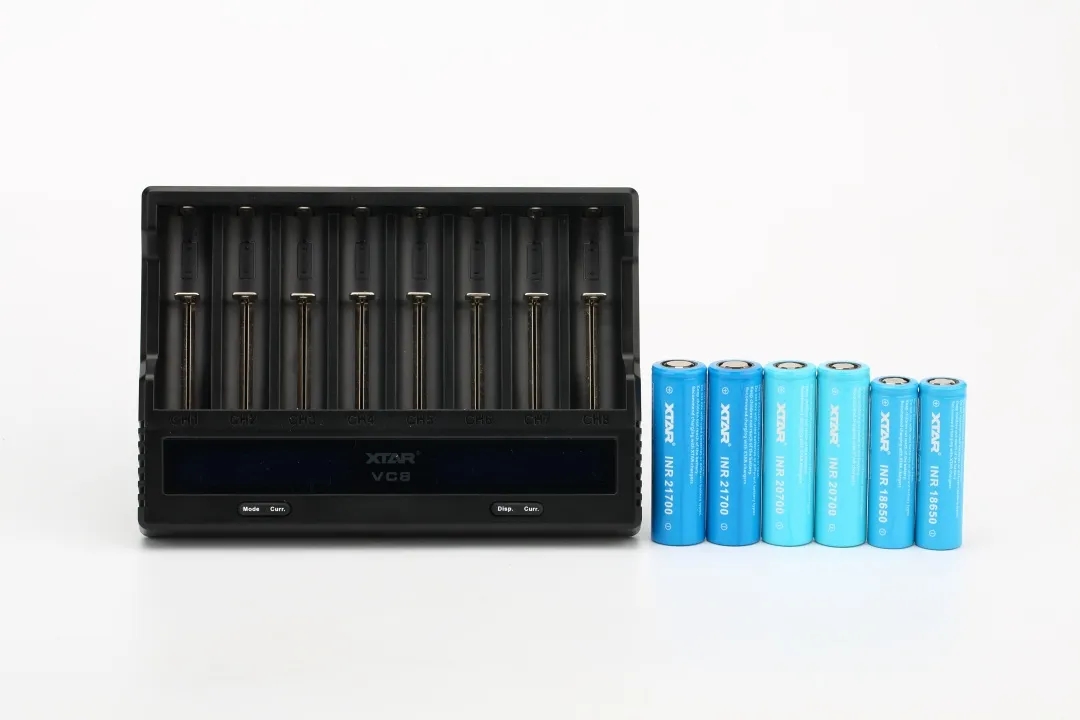 The charging battery quantity determines the charger’s volume. The XTAR VC8 has 8 bays, so its overall size reaches 194mm x 134mm x 34mm, and the net weight is close to 350g, which is a large size in the chargers. 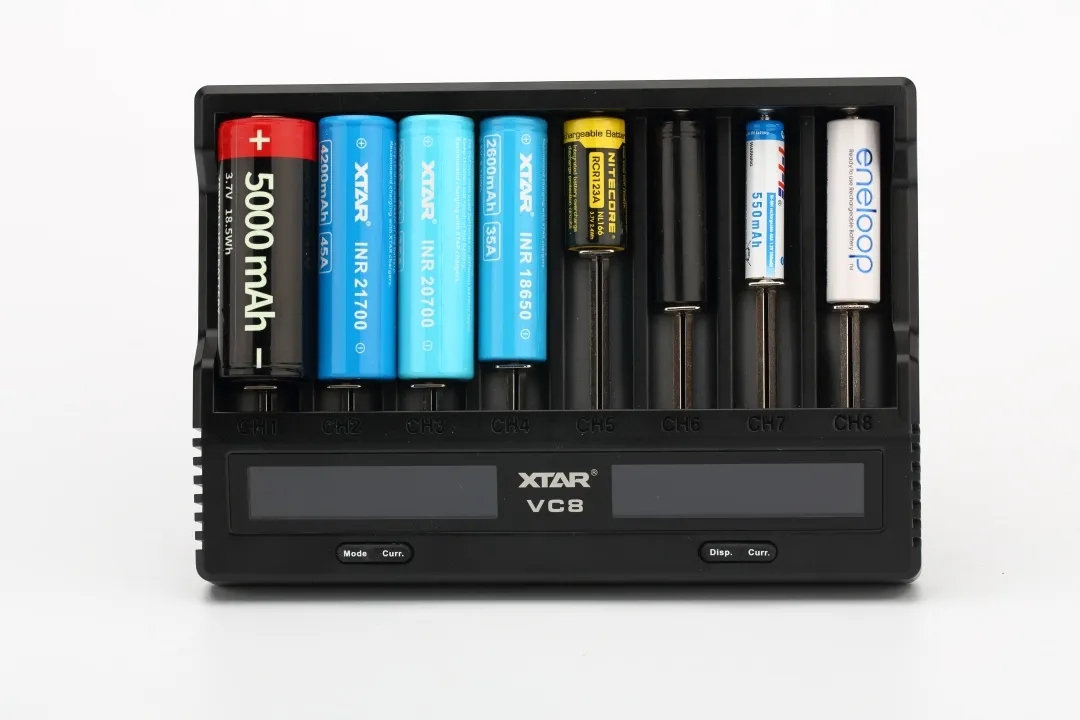 Although VC8 has a large size, it supports 6 pieces of 26650 batteries or 8 pieces of 21700 batteries.
In daily use, all the common lithium batteries can be installed, from 16340 to 26650. If you have many flashlights or need to use many batteries, this VC8 charger will bring you convenience. 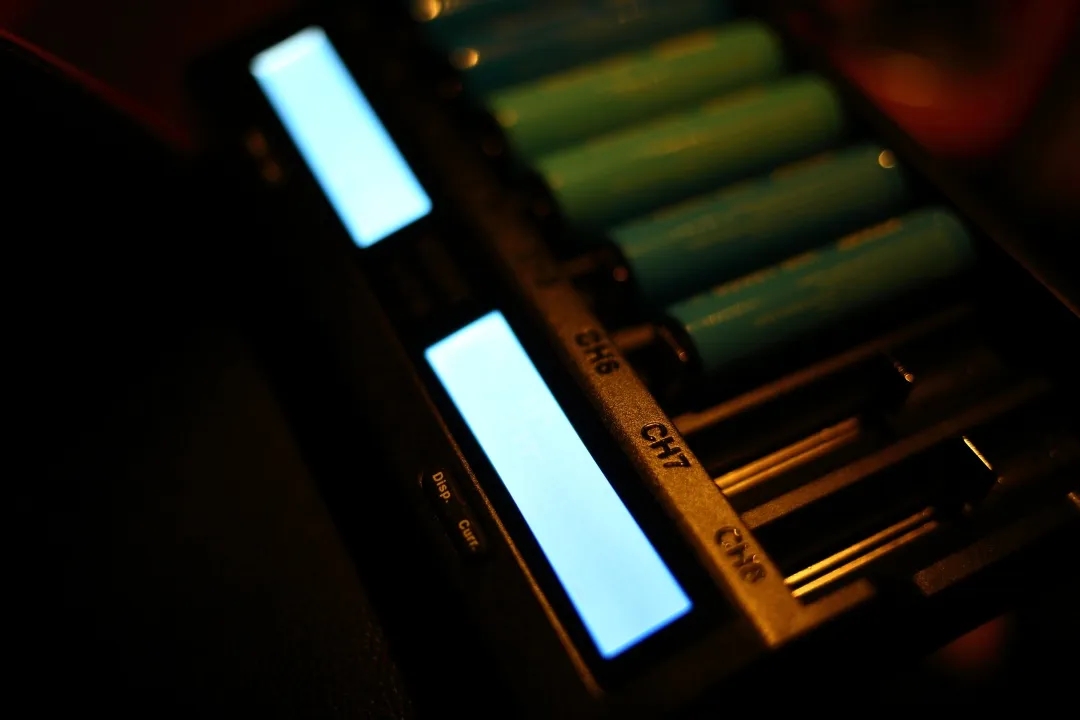 VC8 has two LCD screens, which looks like two 4-bay chargers side by side. 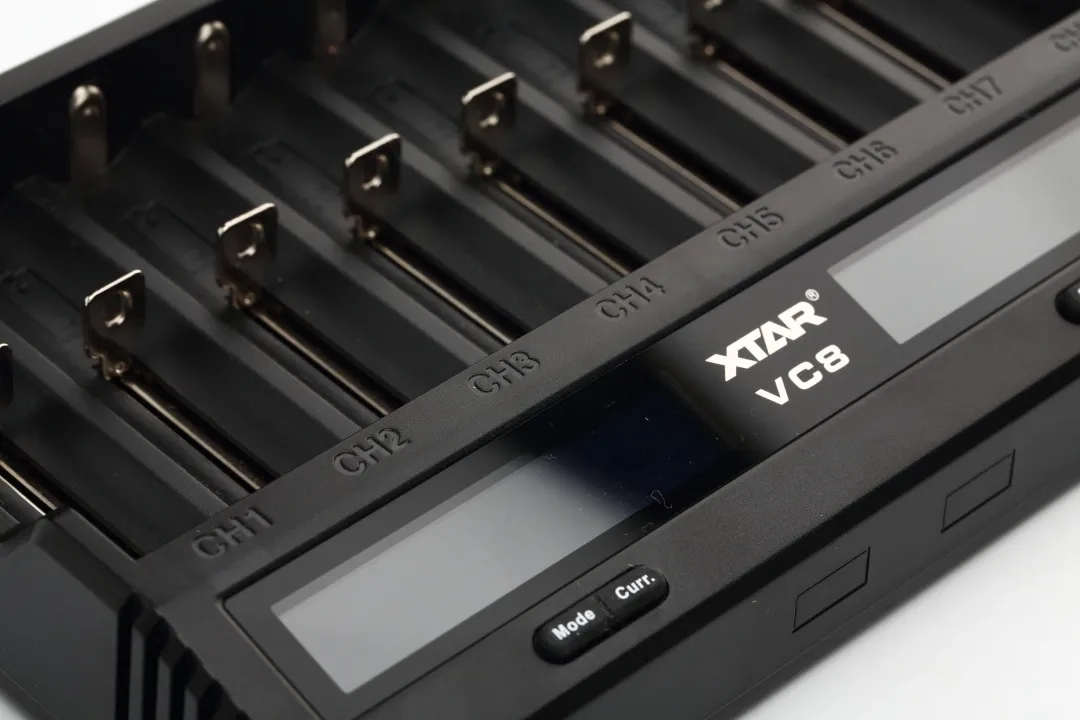 XTAR's LOGO and the “VC8” model are placed in the middle of the two screens, which is very eye-catching. 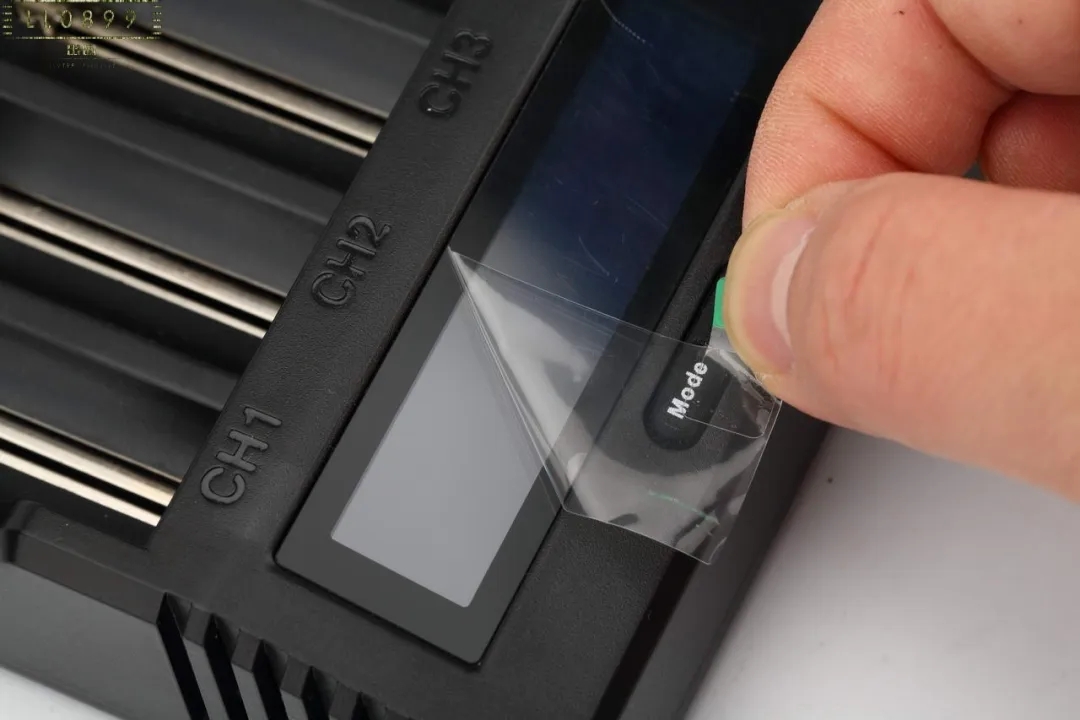 The screen has a protective film. You can remove it when used. 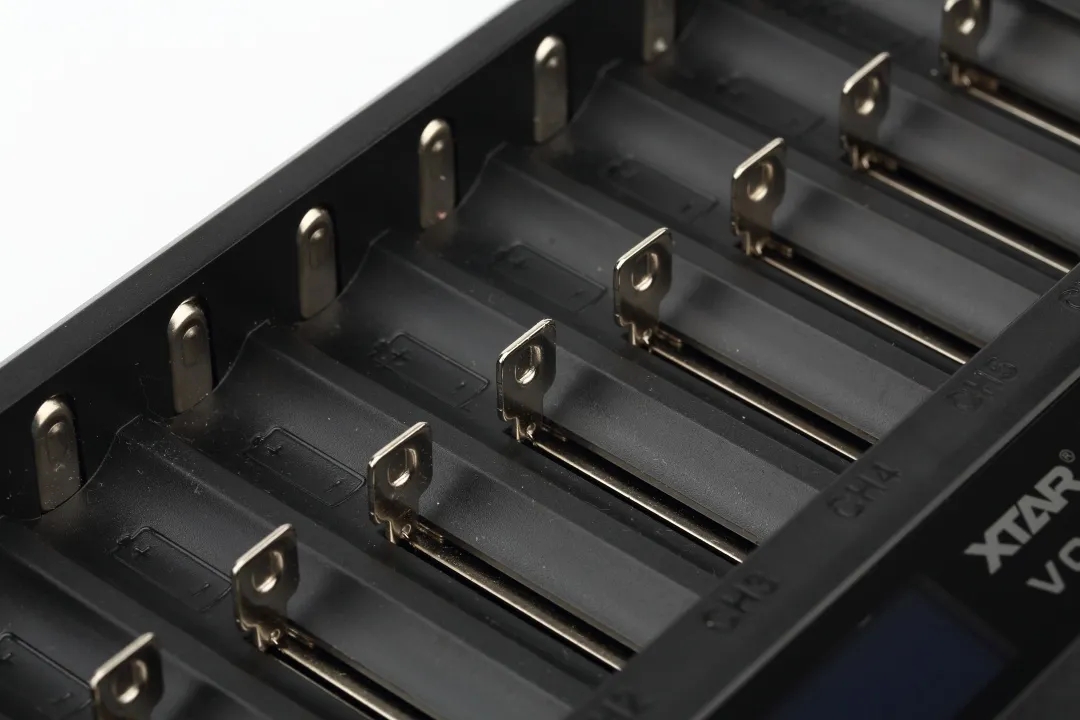 The charger uses a chute design, which is also the structure used by most chargers. This structure is stable, reliable and easy to use.
The contact plate of the chute adopts nickel plating process, so there is no need to worry about the durability.

The channels of VC8 are marked CH1 to CH8 from left to right. And the CH1 to CH4 not only can be used for charging, but also support battery capacity test and charging in storage mode.

Generally, if the lithium batteries are not used for a long time, the battery capacity should not be too full or too low. The ideal voltage is 3.6-3.8V, because it can prevent the battery from passivation to maintain performance. 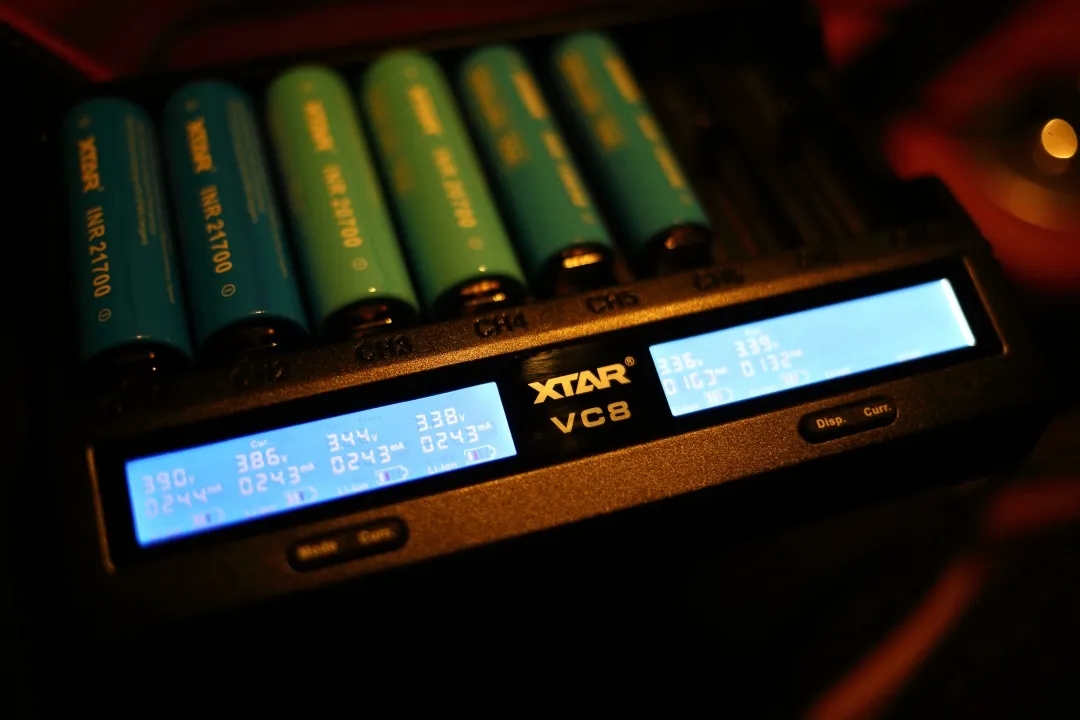 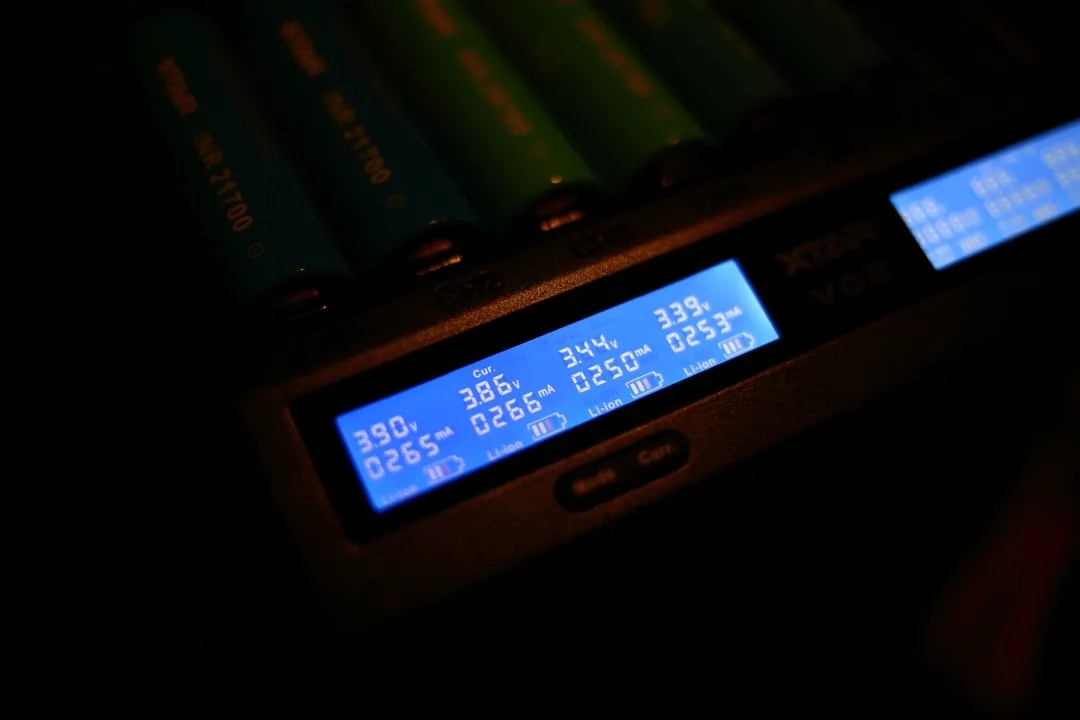 The capacity test of VC8 is to fully charge the battery, then discharge it, and then recharge it for a cycle. The VC8 calculates the battery capacity through the discharge current and time. 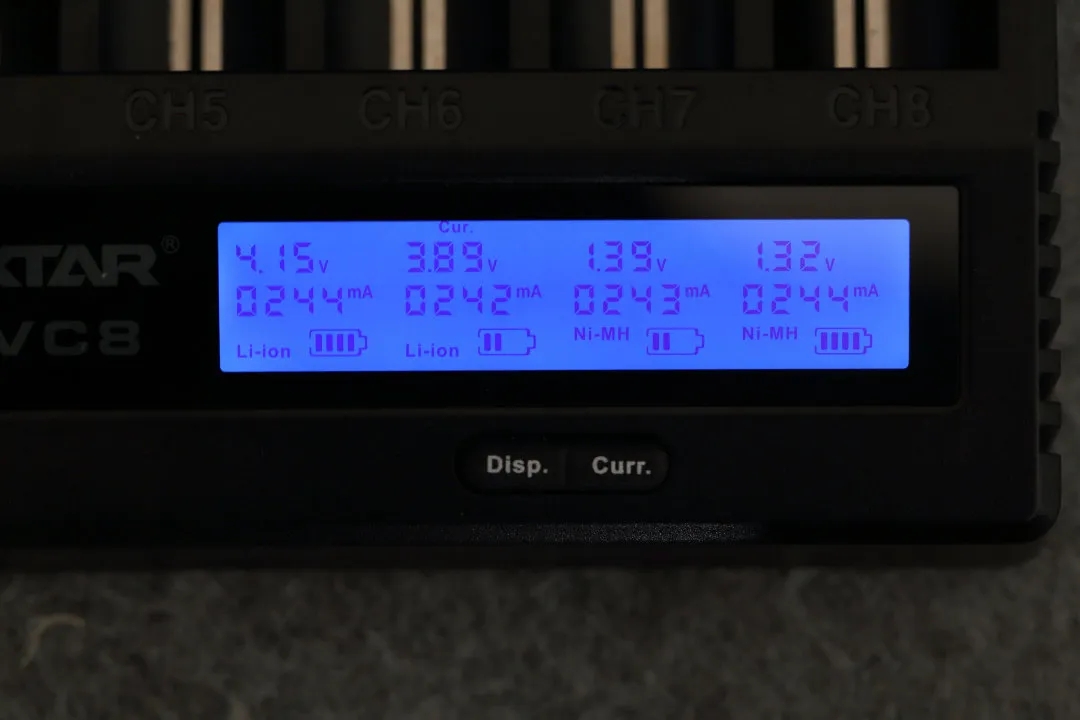 It should be noted that because the silent design of VC8, it doesn’t have a fan, so the current will not be too large during discharge, only about 300mA. Therefore this test takes a long time.

After playing with the flashlight for many years, I found that it is normal for batteries to be over-discharged in daily use. The flashlight is often forgotten to be turned off or turned on by mistake. 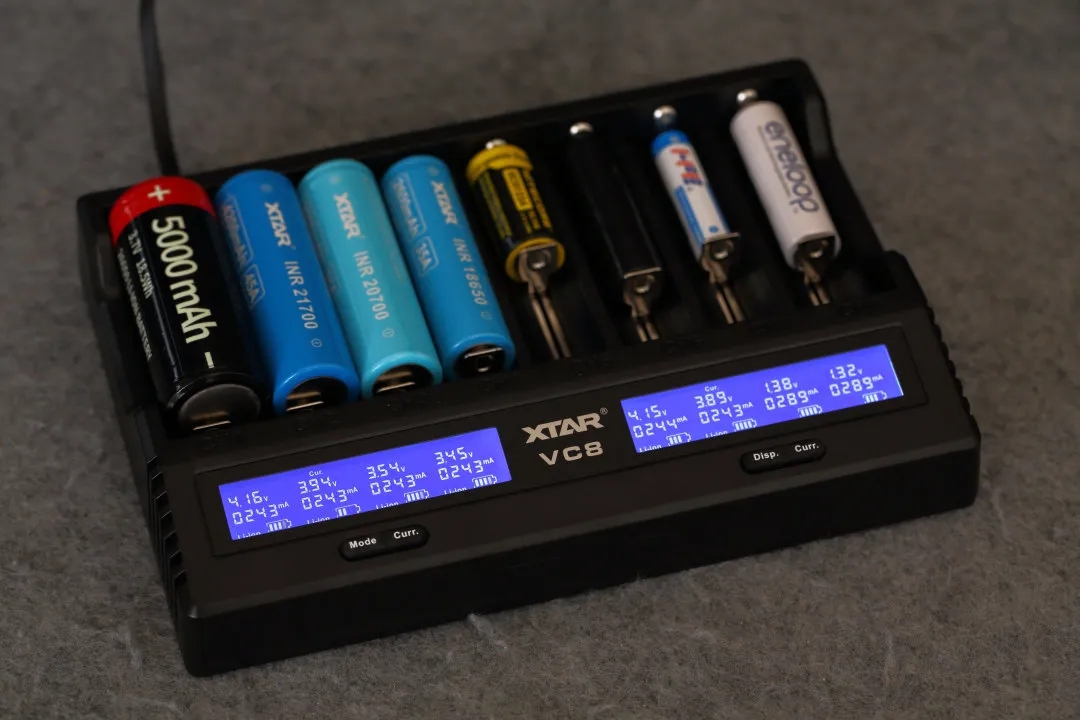 Generally, the charger will rely on detecting the battery voltage to determine which type of battery it is. It is a 1.2V AA NiMH battery or a 3.7V Li-ion. The battery is judged by the initial voltage. If you put a battery with no voltage, some chargers will not charge at all.

A protected battery generally disconnects when it reaches the cut-off voltage. There is no voltage at the two ends of the battery (test with a multimeter). So a charging voltage is required to "activate" the protection board before the charger can detect the battery type.

After testing, the VC8 channels have an activation voltage when they are not loaded, so whether the battery has protected board or not, it can automatically start activated charging.

This activation process is probably to slowly charge to a certain voltage first, then start the set power for fast charging, and finally use constant voltage charging to supplement.

The VC8 has a charging protection function. It will prompt ERR and stop charging for the battery that cannot be activated, installed incorrectly or non-rechargeable. 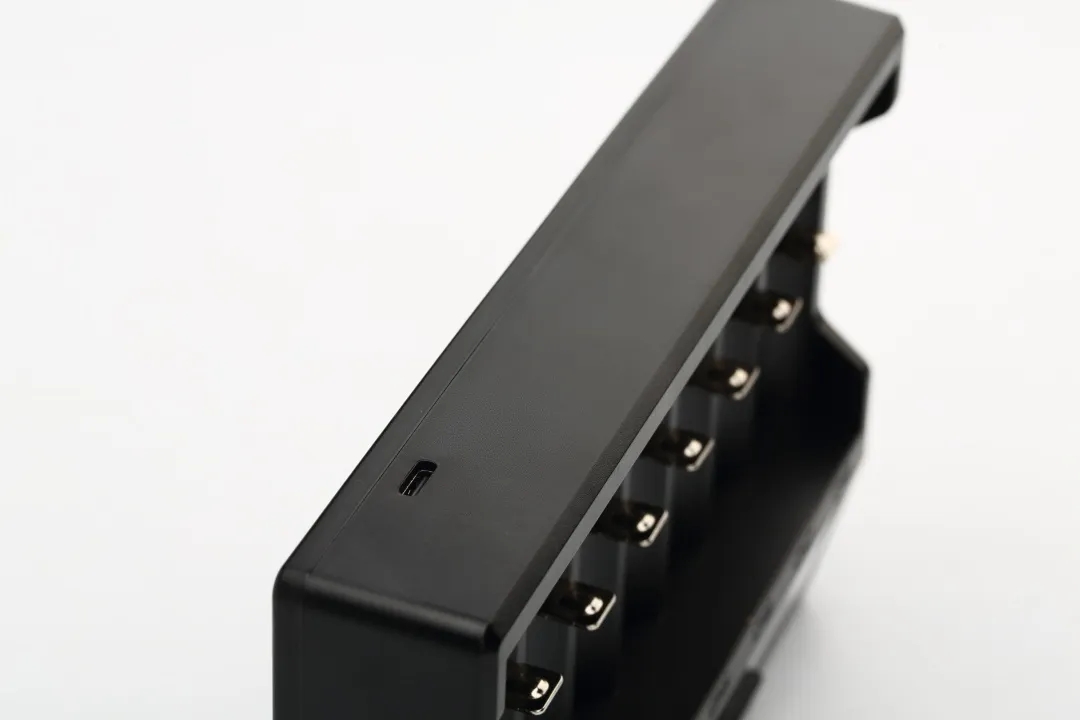 The input of the VC8 charger adopts the mainstream USB-C port, and supports QC 3.0 fast charger. I measured that the VC8 will automatically apply for 9V voltage, the maximum current is about 2A, which is about 18W input power.
● Battery Grading Test 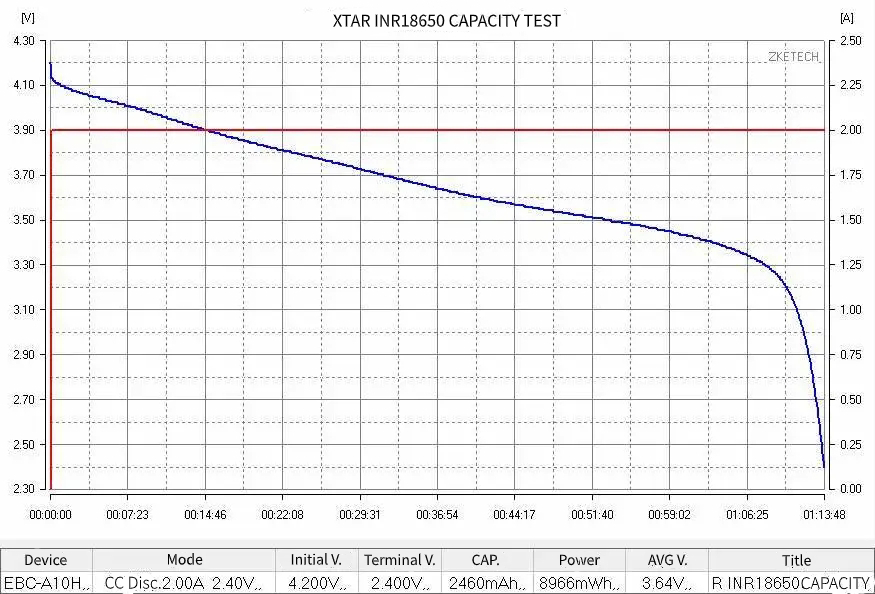 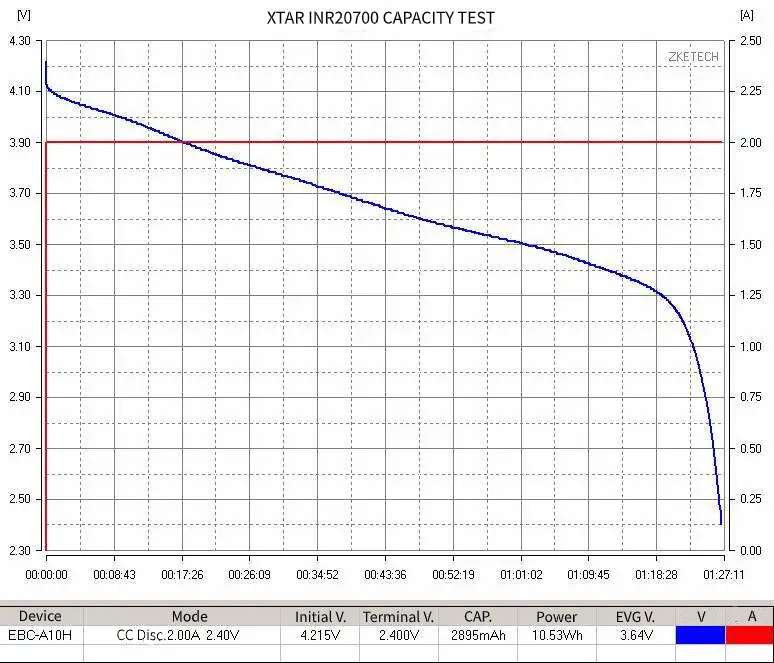 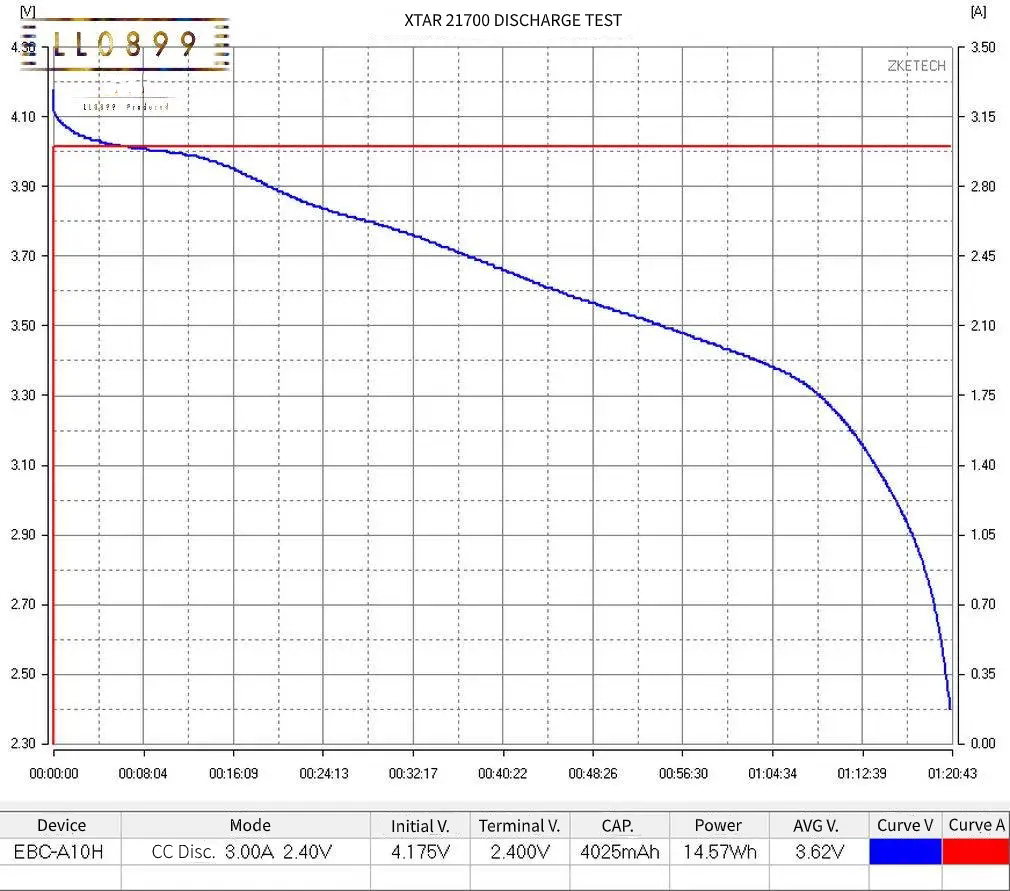 XTAR 21700 4200mAh, real capacity is 4025mAh.
Compared with the professional volume measuring equipment before, the accuracy error of the two is within 5%.
In terms of the capacity, there is still a slight gap compared with the top series of lithium battery, but the capacity of XTAR batteries have no falsification. 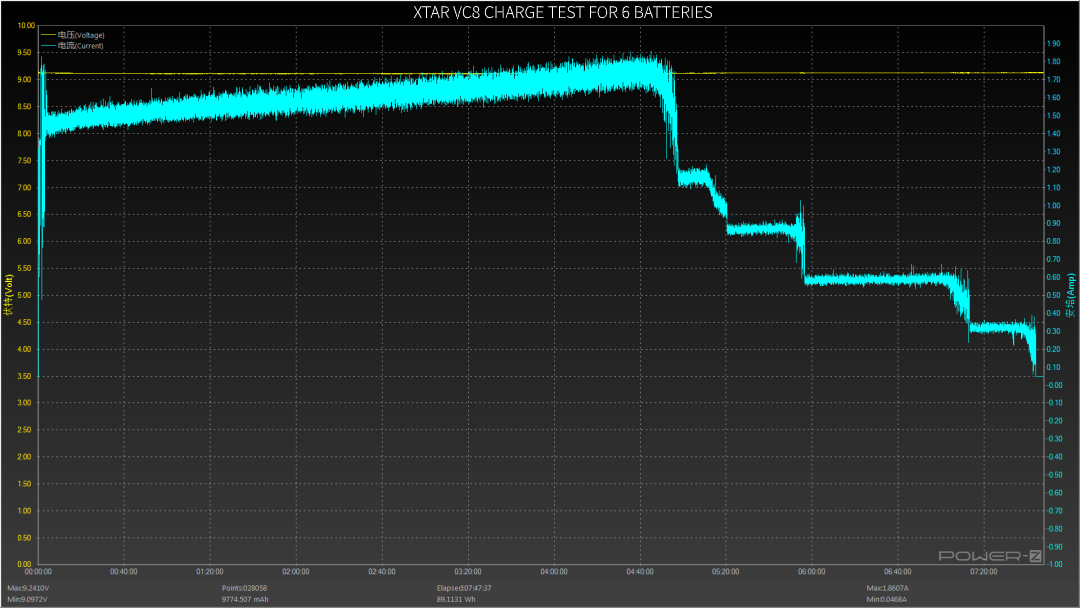 Finally, I made a set of charging tests. First test the charging of 6 batteries - two 21700, two 20700 and two 18650. The total time is about 7 hours and 20 minutes, a total power consumption of 89 watt hours.
Since VC8 supports QC 3.0 fast charging, the charger automatically applies for 9V voltage as soon as it is connected to the power supply, and the maximum charging current reaches 1.8A. The first 5 hours were basically charged at 16W full power. 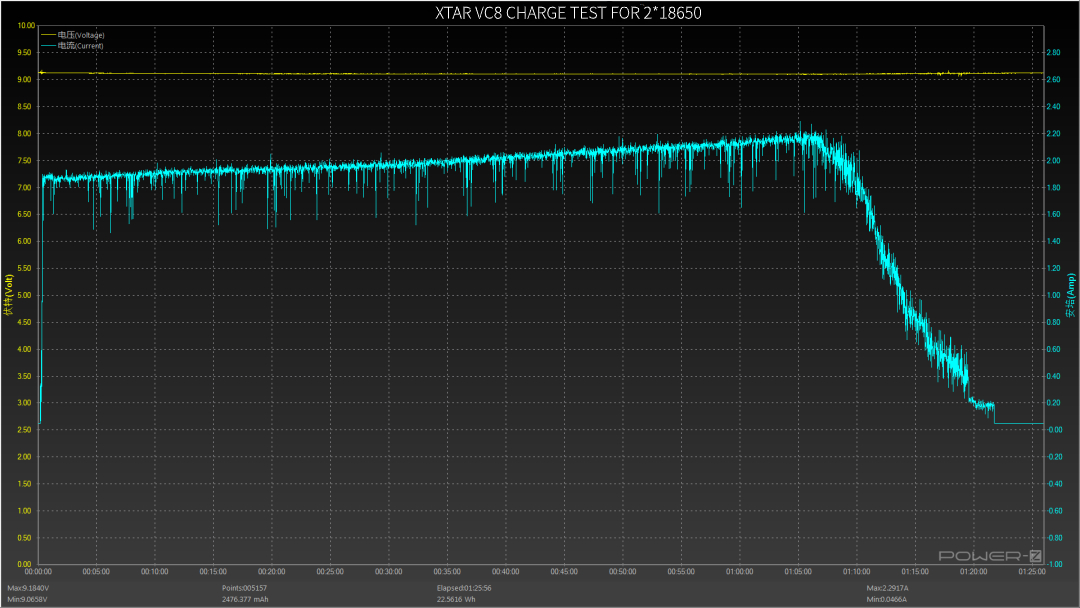 Then a group of 2 x 18650 charging tests were done. The whole process took only 1 hour and 20 minutes, but the measured charging power was actually greater. Almost the entire current was above 2A, and the maximum power exceeded 2.2A, which is close to 20W input power. It's amazing. 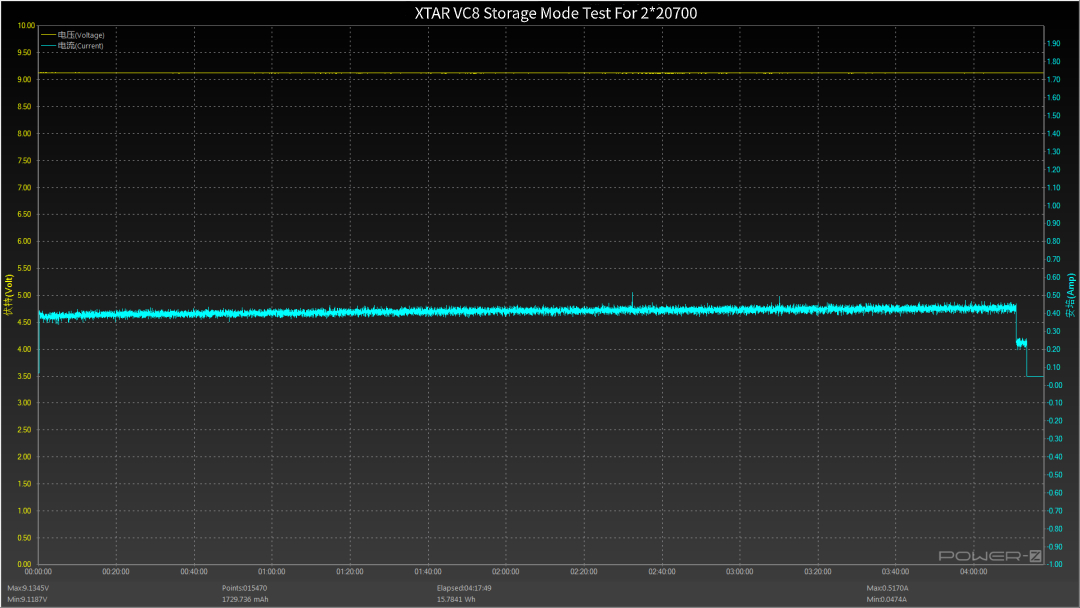 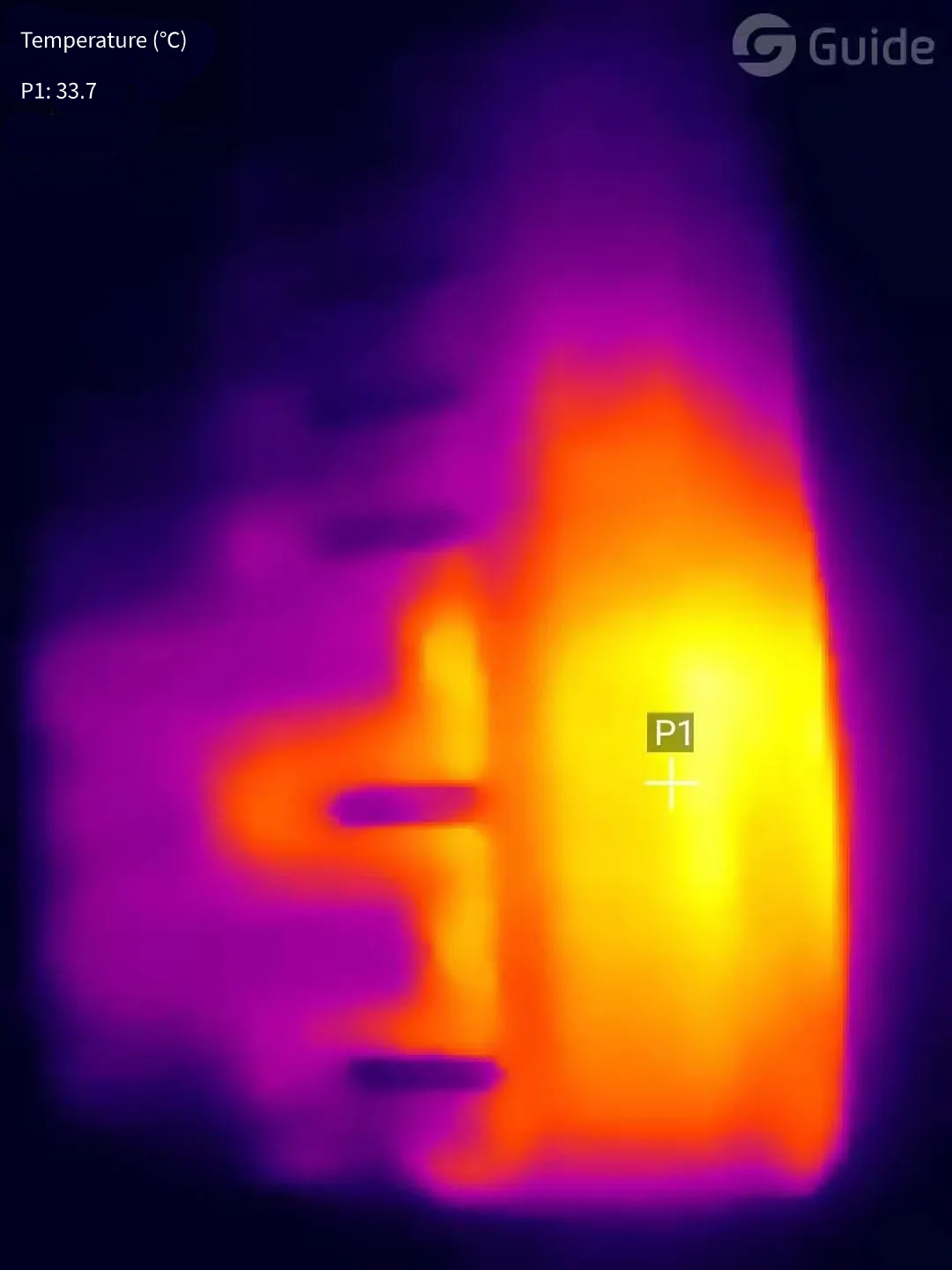 The last part is the disassembly part. Due to the huge size, the charger uses up to 9 screws to fix it. Remove the screws to clearly see the internal structure. The overall wiring is very neat, the original patch welding is accurate, and the wiring is not found with any hidden dangers. 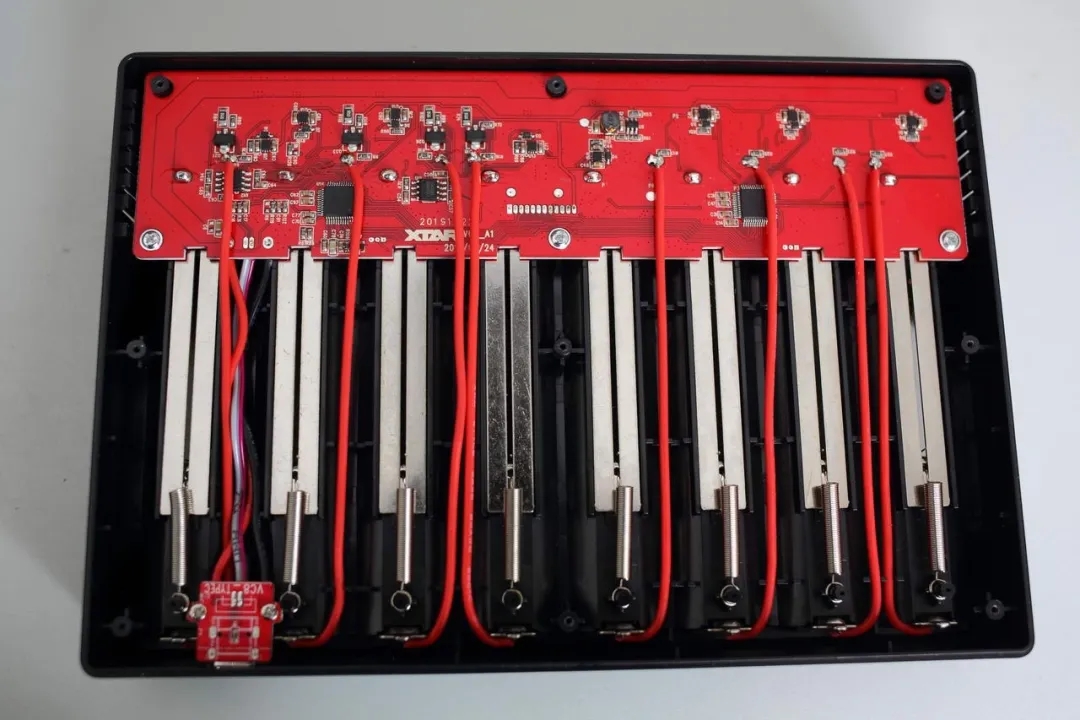 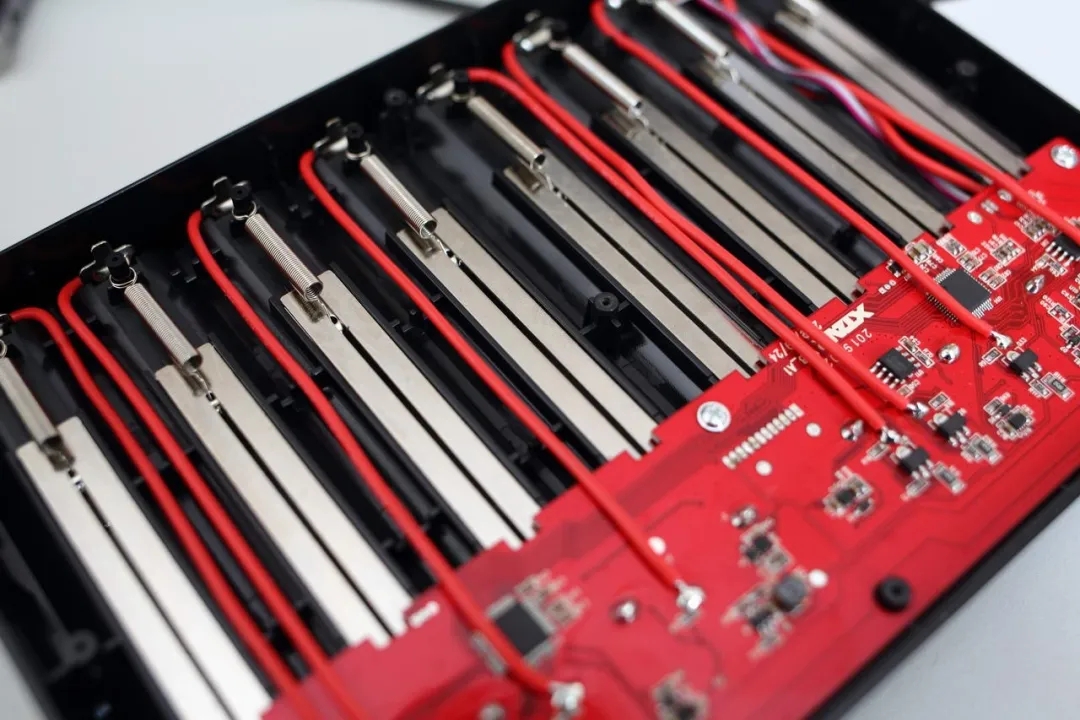 A simple test of the material of the chute basically concluded that it is not made of copper, but the metal sheet of the chute is very thick, which has less effect to the internal resistance. 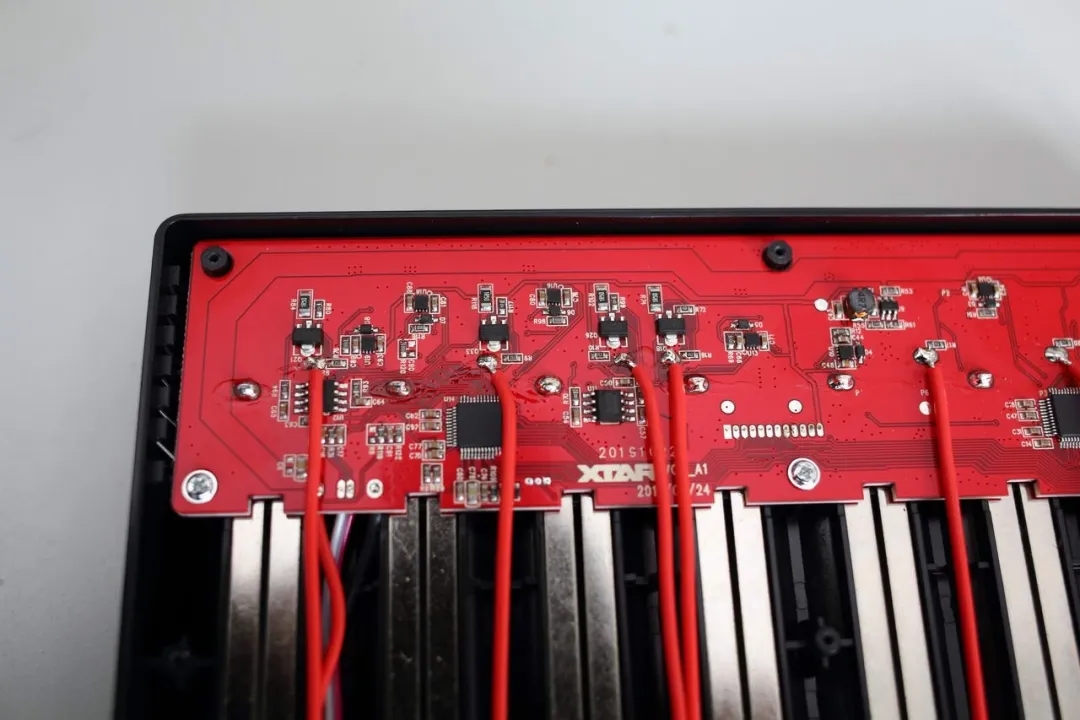 - VC8 is suitable for users with many batteries. The 8 bays make you no need of waiting.
- VC8 can test battery capacity and detect internal resistance. When using multiple batteries, the battery performance can be better matched to maximize the use time.
- USB-C charging.

I have to say that high-power charging still has an effect on the capacity. It is indeed not as good as the low-power charging in full charge.
Last edited: Apr 9, 2020

Great review! Can the charging amps be controlled by the user, or it's always 3A when charging a single cell?
Secondly, how is the VC8 when charging smaller cells, like 16340's, etc.?

MAD777 said:
Great review! Can the charging amps be controlled by the user, or it's always 3A when charging a single cell?
Secondly, how is the VC8 when charging smaller cells, like 16340's, etc.?

Sent from my Pixel 2 using Tapatalk
Click to expand...

The charging amps can't be manual selected. It's automatically. The charging current depends on the input power supply and battery status.
I used a QC3.0 adapter to connect VC8, it reached 3A for single cell, but when I charged VC8 on my laptop, it didn't reach that value, because the power was only 5V 2A.
I think the VC8 is good at charging li ion battery, including the small cells, but it is not so good when it charge AA/AAA batteries.

The charging amps can't be manual selected. It's automatically.
Click to expand...

That's simply just not true. This is straight from the manual:

B
Can someone please explain the Xtar VC8 to me?