These will be used on a 2011 F150, mounted on a bumper height light bar, in conjunction with OEM high beams (whcih are halogen and pretty bad).

Off road use only, mountain roads with a fair number of turns and some longer straights. Looking for better road vision overall, plus some edge lighting for critters ready to dash.

For about the same price, I can get:

Anybody see any advantage of a single pair of D2's vs two pairs Dually's? If I go with the four dually's, do you think four floods, or two floods and two spots?

Thanks in advance for any feedback.
T

I have the regular duallys on the front of my plow truck, they are great. I would think four duallys would be better as it would have more lux not to be confused with "lumen". The only thing i can think of would be running two sets of wires compared to one, and retro fitting them for four instead of two. are you using the factory fog lamps mounts? the dually floods throw pretty far but i think if you would be better of with two floods and two spot, btw floods are very very wide it will light up both sides of the road and trees 40 ft high. but i consider this to be very good thing.
Last edited: Dec 18, 2011
P

Think I'm going to order the dually's. If one set of the floods provides the light I need, will use the others on a few of the moto's...
T

they are really bright but just remember that it is a very wide flood, as long as that is what your looking for you are good to go.
P

I wish that would really make me think about buying a set of d2s in amber to go along with the 40in bar.
C

I got a set of the Dually D2's in Flood on Ebay for $320 delivered. When I turn them on I never thought to myself I could use more light

TheExpert said:
.., btw floods are very very wide it will light up both sides of the road and trees 40 ft high. but i consider this to be very good thing.
Click to expand...

I consider it a good thing as well. I'm in the market for the dually's (not D2) to compliment the Baja Design 20" LED light bar. The 20" really throws well but I have almost no side to side coverage for turns. Where I live, the deer rule the night and I'd really like something in a small form factor that cover side to side very well.

Any chance you could snap one pic to show their coverage? No big deal if not but thanks for posting up about them. Helps me quite a bit.

I've seen the Dually and D2 --- the D2 is a huge improvement.
Bear in mind that these are for offroad use.
And, truth to sing, they aren't all that good compared to some halogens that cost much much less. They lack "punch" if you know what I mean.
And I'm an LED fan as most of you know. And a fan of these lights too ----- just not as driving lights.
M

Not impressed with the D2s floods I received. The beam pattern is very splotchy and not as bright as other similarly sized lights I've used. I haven't installed them and I'm considering selling them while I continue the hunt for another light in the same form factor. Any other suggestions out there?
C

Maynor said:
Not impressed with the D2s floods I received. The beam pattern is very splotchy and not as bright as other similarly sized lights I've used. I haven't installed them and I'm considering selling them while I continue the hunt for another light in the same form factor. Any other suggestions out there?
Click to expand...

We must have different D2's as my floods have a bright smooth beam. What similarly size lights have you used? I thought these where the brightest for the size available at 2600 lumens each.

Mine look very similar to

Shoot. I made a mistake. They are Dually's, not D2s. Less output than the D2s by far.

Maynor said:
Shoot. I made a mistake. They are Dually's, not D2s. Less output than the D2s by far.
Click to expand...

I liked the Trucklite LED spots and floods that I had on my Jeep. Trucklite headlights were fairly miserable; but, freed from attempting to aim their monsters, they were brilliant flame-throwers.
I think they're pretty pricey for what they do though. Cheap and stinky Chinese HID lights are still the best bang for the buck for offroad lumens.
C

They are far from Ideal but 100x better than the Brand new Silverstars I had installed for a week before buying the Trucklites.

The D2's have twice the lumens as the dually's, but they are also twice the price. Beam patterns differ a bit, but my thinking is that two pair of Dually's, one flood, one spot, might be a more effective than a single pair of D2's at the same price.

Obviously if you only have room for a single pair, it would drive you towards the D2's, but they are so small mounting typically would not be a problem. Seems with twice the Dually's, you could tune the light output more. Spot plus floods, more outward angle on the sidemost lights for corner lighting, etc.

I'm experimenting with some Duallys right now; I have four dually floods on loan. Three on a front light bar, another intended as a backup but not yet installed. Only one nightime/little moon/mountain roads test so far. Good cornering lights, and they fill most of the huge near field hole that my terrible oem headlights have, but as mentioned before, the floods definitely any distance lack punch.

I've used the Kragen (Custom Accessories, 4" integrated ballast) driving lights before in other applications. No doubt in my mind that they offer more light and a better beam pattern for $100/light than the Dually.

But to be fair, the Rigid's do offer several other advantages:

Here's a quick picture of the three Dually's I'm playing with: 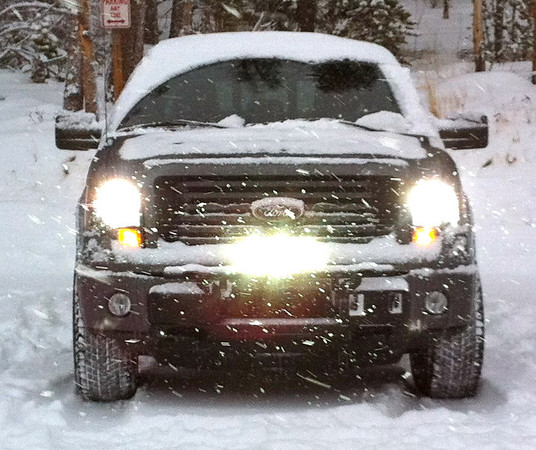 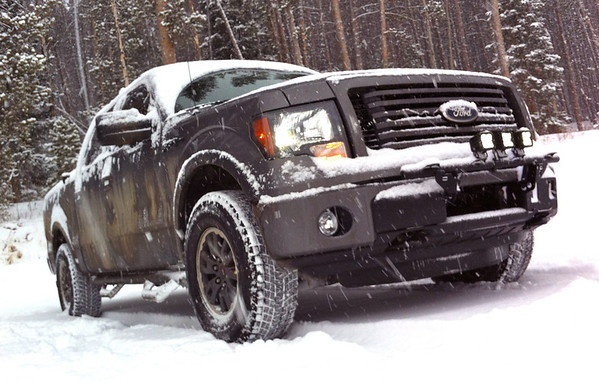 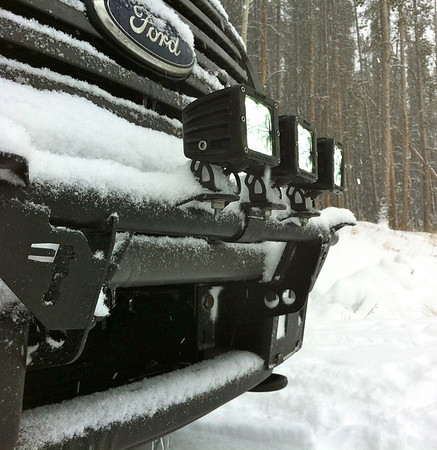 One big advantage for the offroader is that with more lights, you can point them in more directions.
The offroad environment is much more dynamic in terms of terrain navigation vs bogey-avoidance. It's slow work, often tedious and dangerous. The more angles that you are able to use to see, the better.
T

If anyone is unsure about rigid I would highly recommend to pick up just one set of duallys they are not that expensive and built very well, you can see some of their destructive testing on the website. Ill have to post some pics when i get that 40" bar. As they state its 15,800 lumens.
P

Redid my Rigid light mount yesterday... I wasn't happy with the stock tab spacing, and wanted the lights slightly higher and farther back, so I fab'ed up an aluminum bracket and used some PIAA 1.5" bolt on tabs to locate the new bracket... 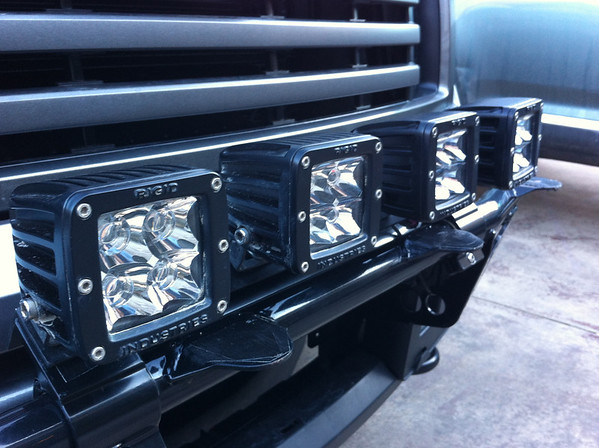 Anyone have any feedback on the amber D2s?
U

Location
Kirkwood, Delaware. About five miles north of the

I know this thread is a bit old, but, I just had a pair of the Dually D2 amber, in the driving beam pattern, installed on my Polaris Ranger HD on the front brush guard. And a set of the Dually clear, in the spot beam pattern installed on the top of the cab. I'll be heading out to my place in West Virginia this morning and I'll be there for a few days. After I've had a chance to take her out and try the lights out I'll post up how well they work. By reputation, and what I've researched, these Rigid lights are suppose to be the bomb. Couldn't find much on the Amber though. Since the Ranger will be going at a relatively slow rate through the woods, and in inclimate wheather, I hope the Amber will do a good job of cutting thru the muck.
You must log in or register to reply here.
Share:
Facebook Twitter Reddit Pinterest Tumblr WhatsApp Email Share Link