Single Cell CR123A Lights: What do you use?

gottawearshades said:
There's something about how a 123A light like HDS or a Malkoff MDC fills the hand. It's just right. They're kind of overbuilt, bigger than they need to be if you compare them to something like an Olight S1, but I've been carrying a light like this (Surefire L1 before these), and I go everywhere with an HDS. You need to try one.
Click to expand...

This. My MDC, especially with the larger VME head, fills my hand like no other single cell light. Its just right.

I usually use my Olight S3 Baton but am seeing a ton of love for the Malkoff MDC on here. Problem is it is almost ALWAYS sold out in the neutral tint. Just another light I can only dream of ever owning. It can be depressing when the good lights are never available.
Last edited: Jul 20, 2021
S

I have a few single 16340 and/or CR123 flashlights. I generally prefer EDC lights that can take some type of primaries if needed. However, I've since switched to 14500 lights. The capacity is about the same, but I can swap in AA's if I am out and about and can't find CR123's (assuming that the flashlight takes them). Additionally, with the 14500/AA compatible flashlights, the AA output is fine for a task light... beam profiles play a role for task specific usage though.

That being said, my single CR123 lights are:

1. Nitecore MH1C that's been riding in my work messenger bag for years. Almost never used since I usually use whatever I'm EDC'ing.
2. Older ET D series clicky that I thought was too stubby for my preferences, and I preferred the more floody AA version
3. a newer Surefire EDCL1-T which I keep as a backup "bump in the night" light. The head is a little too big for my preferences for EDC, as I keep my flashlight in my left back pocket.
4. Older Fenix headlamp that takes a CR123 and has an included body for a AA... it resides in my emergency bag.

1. ET Ti AA CLicky (2 generations now)
2. Streamlight Macrostream USB (my new go-to EDC light when local and might need a light for work to supplement my dedicated work lights; this does not take AA's, but will work with generic 14500's)
3. Fenix LD30 w/ DC-fix on lense. It's an 18650 light but is in between the size of my Macrostream USB and EDCL1-T above... but noticably heavier.

I have a Fenix PD10 Titanium R5 and a Fenix P2D Q5. Neither gets used much today (except maybe cold nights in winter). That size light has been mostly replaced by 1aaa lights like the 120 lumen 1aaa Olight, the Fenix E01 v.2 and usb rechargeable lights like the Nitecore Tip and Tip 2. When you can get a smaller, brighter light that doesn’t use expensive batteries, the single 123a light is the first to get neglected.

I have used/carried all the below CR123A lights as EDC. Listed in order of purchase as I only started using CR123A lights since 2015.

Streamlight Protac 1L (180 lumens). 2015.
Stopped using as developed terrible flicker after a about 18 months, that I couldn't resolve (tried everything including other switches), so issue seems to be in the head, but never dropped.

Elzetta Alpha. 2016.
Stopped using as high only, so of limited use. Plan to sell.

Streamlight Protac 1L-1AA. 2016
Now my backup light, carried on my EDC pack. I don't really trust the Streamlight Protac series as they are cheap Chinese made lights and I have had bad flicker issues with 3 other models, but so far this one has held up good.

HDS EDC Executive 250. 2018.
Most most used/carried. Best EDC light ever IMO, I highly recommended it. Long runtimes, perfect balance of beam, and good throw on the XP-G2. I've never felt I needed more than it's 250 lumens.

Malkoff MDC SHO. 2018.
Recently sold as I just wasn't using it any more, due to high only.

HDS EDC LE 250. 2019.
Second most used/carried. Awesome runtime on high, but hard to beat the general utility of the Executive model.

Surefire Backup E1B-MV. 2019.
Nice light, but stopped carrying as it has a terrible 27 min runtime on a primary CR123. Nice low for indoors, but of limited use walking outside in the urban areas. Still deciding to sell or not.

Surefire Vampire V1. 2020.
Nice throw, but of limited applications after I carried it for a while. Also plan to sell.

Although there are so many CR123 lights on the market, many have side power buttons (Olight etc), I avoid all these types, so only ever considered the above for EDC pocket carry.
Overall I've been fairly disappointed with most of my CR123 lights, apart from my HDS ones. If HDS Systems didn't exist I'd probably go back to AA lights and carry a Fenix E12 V2.0.
Last edited: Jul 27, 2021

I still have my Leatherman Serac S3, and it’s still a great flashlight, but I’m not using it at the moment, because CR123As are too expensive where I live.
E

To stay on the topic, I'd say I would use one of the following lights :
- Sunwayman M11R
- Eagletac D25C
- HDS Clicky or Rotary
H

I have 2 x McGizmo Haiku lights that are among my favorites. They're elegant, classic lights with good support for a variety of battery formats. I recently had one of the Haikus upgraded by Tana to his "TripLED" head with an H17F driver. I use Keeppower and Vapcell 16340 batteries with them.

That said, I prefer 18350 lights because of the higher capacity of batteries such as Keeppower's 18350 1200 mah, the drivers available and selection of metals. I prefer Zirconium and have several Oveready and Fellhoelter lights in this format.

Or RCR123s (non-USB type) when using in conjunction with other LED module upgrades (eg. from Lumens Factory). I run mine with 2xRCR123s.

Back to topic. I'm generally not inclined to 1xCR123a light setups due to their size (too easy to lose) and limited capacity from a single CR123a/RCR123a. I'll use one only if I absolutely need to conceal-carry one (there are places out there when one cannot get admitted with flashlight carry, which is ridiculous).

Anyway my EDC 1xCR123a is a cheapskate Nuwai Q3 (TM-303X, clip removed) with custom module and glass lens installed. Module consists of custom heatsink, and either NG1000 or GD1000 driver (have a few of these made for self use). LED was SSCP4s but have since been upgraded to XPG2 (S5 bin) to Nichia 319a (4000 or 5700K). Not very bright by current standards but IMO 1A driver is more than enough for single cell setups like these......

yazkaz said:
Or RCR123s (non-USB type) when using in conjunction with other LED module upgrades (eg. from Lumens Factory). I run mine with 2xRCR123s.

Yes I am. Been looking for a 3310 but couldn't find one in europe so far. There is one listing in the UK I think but it doesn't ship to germany.
Y

Olumin said:
Yes I am. Been looking for a 3310 but couldn't find one in europe so far. There is one listing in the UK I think but it doesn't ship to germany.
Click to expand... 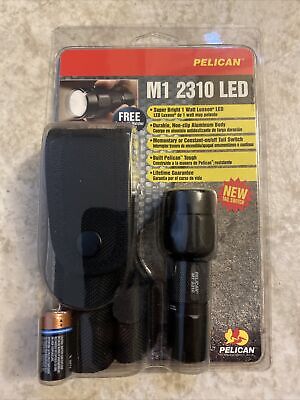 Note that this is the MY2006 batch which shares the same original incan 3310 host design, down to the tailcap switch -- NOT the subsequent batches with flat tailcap and side red flush switch. Seller should ship to Germany as well. Go figure.

I wonder how many still carry a Tekna. They had a little plastic number said to be a back up light for law officers before the SureFire phenomenon.

Note that this is the MY2006 batch which shares the same original incan 3310 host design, down to the tailcap switch -- NOT the subsequent batches with flat tailcap and side red flush switch. Seller should ship to Germany as well. Go figure.
Click to expand...

The M6 may be much easier to find and also cheaper, but the M1 is much more rare and difficult to source, hence the price hike. And if you're dying for the very original 3310 then well, good luck with that...

That said, the M6 (2320) is gradually running out and the only other variant you can find easily is the 2330 LED model. Not sure if the build quality is as good as the incan original though, but it was released at the same time as the M1 (2310 LED) back in 2006 I believe. 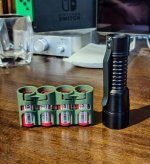 Holsters & Lanyards for our lights (what do you use)