Serial 25-30 did not arrive today. Likely Monday then. Once arrived I will analyze production quality and then the details for launch soon after. I will likely launch here on CPF to allow you guys to do serial select. Whatever is left I will add to my store. 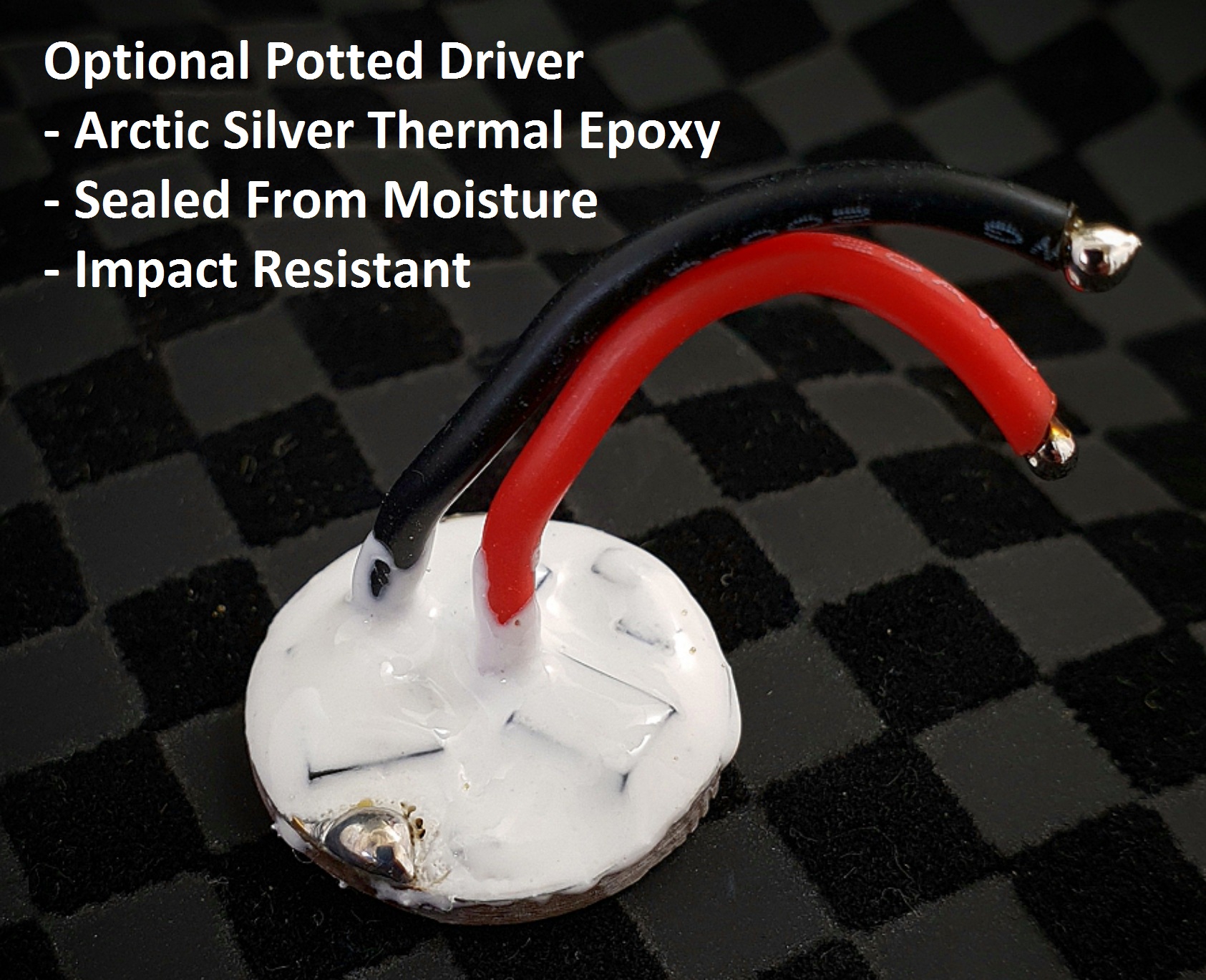 Vihn, forgive me if I've missed it if done, but can we have some size comparative picks?

Kevin1322 said:
Vihn, forgive me if I've missed it if done, but can we have some size comparative picks?
Click to expand...

I am all prep for tomorrow 6061 sample shooting test then I got curious and grab a relatively thick flashlight tube to shoot at with my PCP .25 pellet gun to see what's the damage and the result is devastating only at about 40ft/lb of energy. 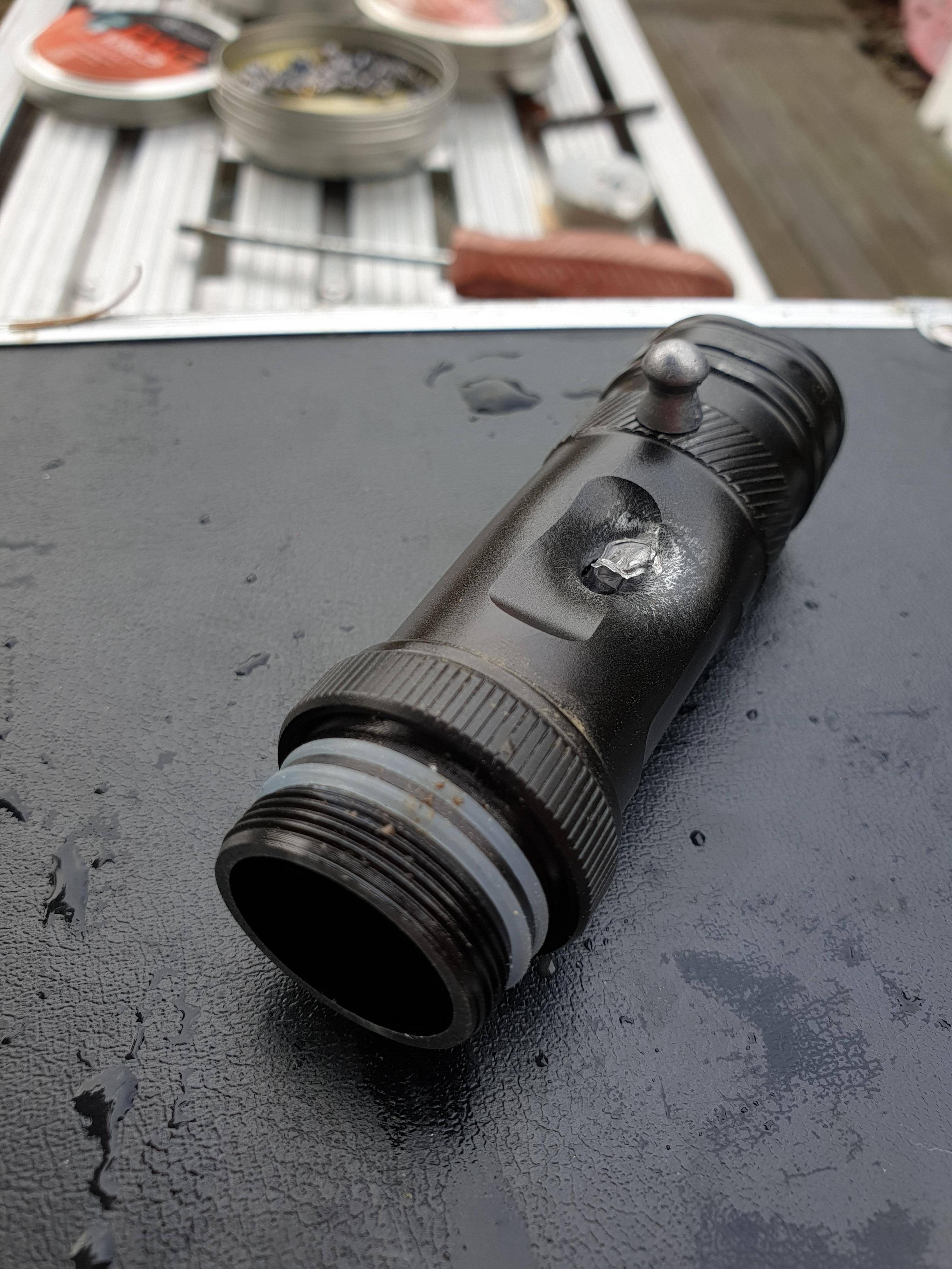 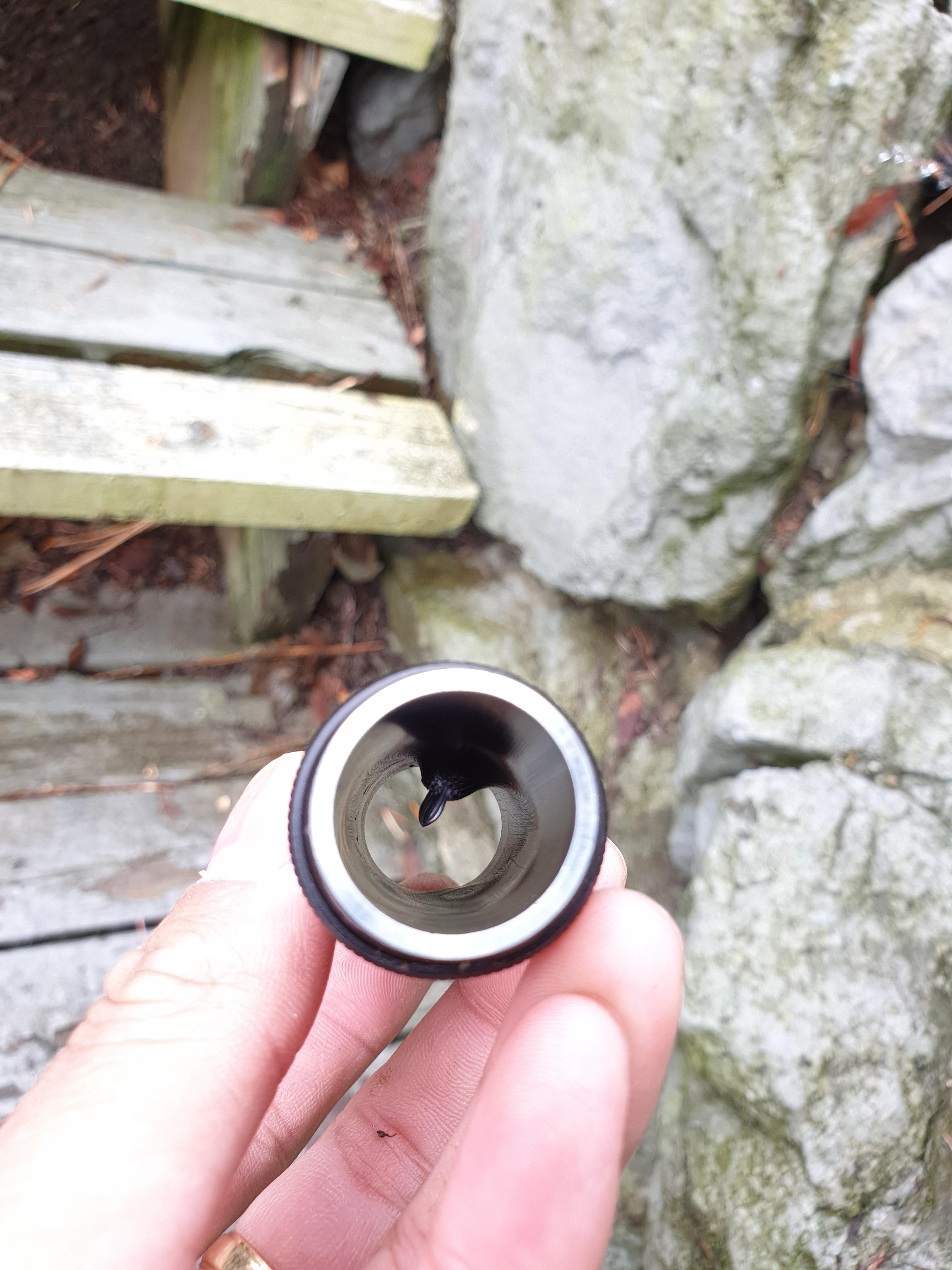 Vinh, is there any downside to going with the potted option other than the initial added expense? For example, does it reduce the light’s ability to heat sink properly, or will it make future upgrades more expensive?

Bronco said:
Vinh, is there any downside to going with the potted option other than the initial added expense? For example, does it reduce the light’s ability to heat sink properly, or will it make future upgrades more expensive?
Click to expand...

At first I was going to use cheaper potted adhesive like Fujik and just do a sloppy fill and it should still have the same benefits but then future driver upgrade/replacement would be a mess. Also fujik cant compare to arctic silver in terms of heat transfer. I also see some company coating a thin layer of clear adhesive. Which seem to insulate heat relieve despite cleaner look and easier future service. With these observations I figure individually coating each driver with a great thermal adhesive should reduce the mess and gives future access while does its job and doesnt insulate as much. Air without turbulent is not a very good heat sink so it's likely arctic silver adhesive might even help the components heatsink. Of course it's all speculation on my behalf. Frankly, none of this really matters. Unless u plan to drop ur light on a daily basis or work in a high moisture environment I do not think potting is needed. Save the money. However if you want the best of the best to avoid battery leak damage, sea water damage, and crazy extreme drops then yes I would pay the extra.

I got about 4 emails since I have started my torture tests. Each one revolve around my marketing strategy for this light and the hype around it. I will attempt to answer it here in case others have similar curiosities.
All of the tests done so far was to simulate the harshest exposure that I can think of. The goal was to produce a light that you can always trust to turn on. As simple as that. The hype was just a side effect because the light passed all the tests beyond my expectations. I tried my best to make the tests as observable as possible on video so everyone can make their own inform decisions. Regardless, If your purchase is not what it's hyped to be then simply returning it for a refund is always an option. Purchasing the light is not a trap. At least not one you can't get out of. Always let it be a relax purchase experience as I have never taken anyone's money and not deliver.

​
I got about the same number of emails asking about why does anyone need a light such as this. This one I can't really answer. My only goal was to make a light, then conduct a bunch of tests and hopefully based on those tests one might consider purchasing for thier needs/wants so I can pay the bills.

P.S When the light is fully launch/revealed I will talk about the light engine build and why I think it survived the tests.

vinhnguyen54 said:
I got about the same number of emails asking about why does anyone need a light such as this. This one I can't really answer. My only goal was to make a light, then conduct a bunch of tests and hopefully based on those tests one might consider purchasing for thier needs/wants so I can pay the bills.
Click to expand...

emphasis in red is my own.

The "need" question could obliviously be indiscreetly asked of anything that's humanly attainable but the thing that's most surprising to me, is that from the time we're old enough to form sentences, we're overwhelmed with the familiarity of advertising and marketing. Perhaps I'm too critical in assuming that concept is commonplace. Should a modder/manufacturer like Sky Lumen say, 'this light is as reliable as any commonly produced light available today,' (not an actual quote) shows videos supporting the notion... and then someone asks, "what do I need that for" I don't feel that the question warrants a sincere response. The simple answer is that they don't, but if they want it, they'll know what its capable of. :duh2:

Granted, I don't know the context or wording of these emails, or if the inquiries were serious, or if they were even adults or not. Any kids out there, emailing Vinh with questions, get a free pass, in my book!:thumbsup:

That's Phuong's subbie. She loves that gun! I love shooting .327 too!
N

I got you be honest. This light is definitely bulletproof. I think that we all can appreciate the torture test that have been done to prove the heft of this light.

I really wouldn't bother putting bullets do a brand new light. Keep that light and make some profit. I think that we would all agree on this.

This is p60 flashlight? Yes

U said it can take 1 X 18650 or 2 X 18650 doesn’t that means to use tube inside the light while using 18650s to prevent rattling? Yes thats what the sold adapters are for. There is also plan for a long Baton style 4 cell version if things goes well.

Will it come with 21700 batteries? Cells are not included.

Are you also "Nichia" on BLF?
Click to expand...

I highly recommend getting at least 1 spare ORings Pack with your order.
Please install one of each Extra Water Resistant Oring on both inner ends of the body if you plan to do crazy extended water dipping like me. The standard Oring that is installed on the light is the same as the ones on the body and they are good for normal water resistance and ease of tail cap removal for daily use.
All SLN are delivered with blue boot default but experiment with the black one if you have weaker finger strength or just improved sensitivity.
SLN does not deliver with body grip Orings. You need this pack if you want them. They are Matte, Grippy and nearly a buck each. Leave them out if you feel the fins will relieve heat better without them.
The suspension Oring is not required unless u plan to beat up the light like I did.

SLN "tune ups" are free forever. Just send it back in and I will get it to optimal specs at just costs of parts and shipping. 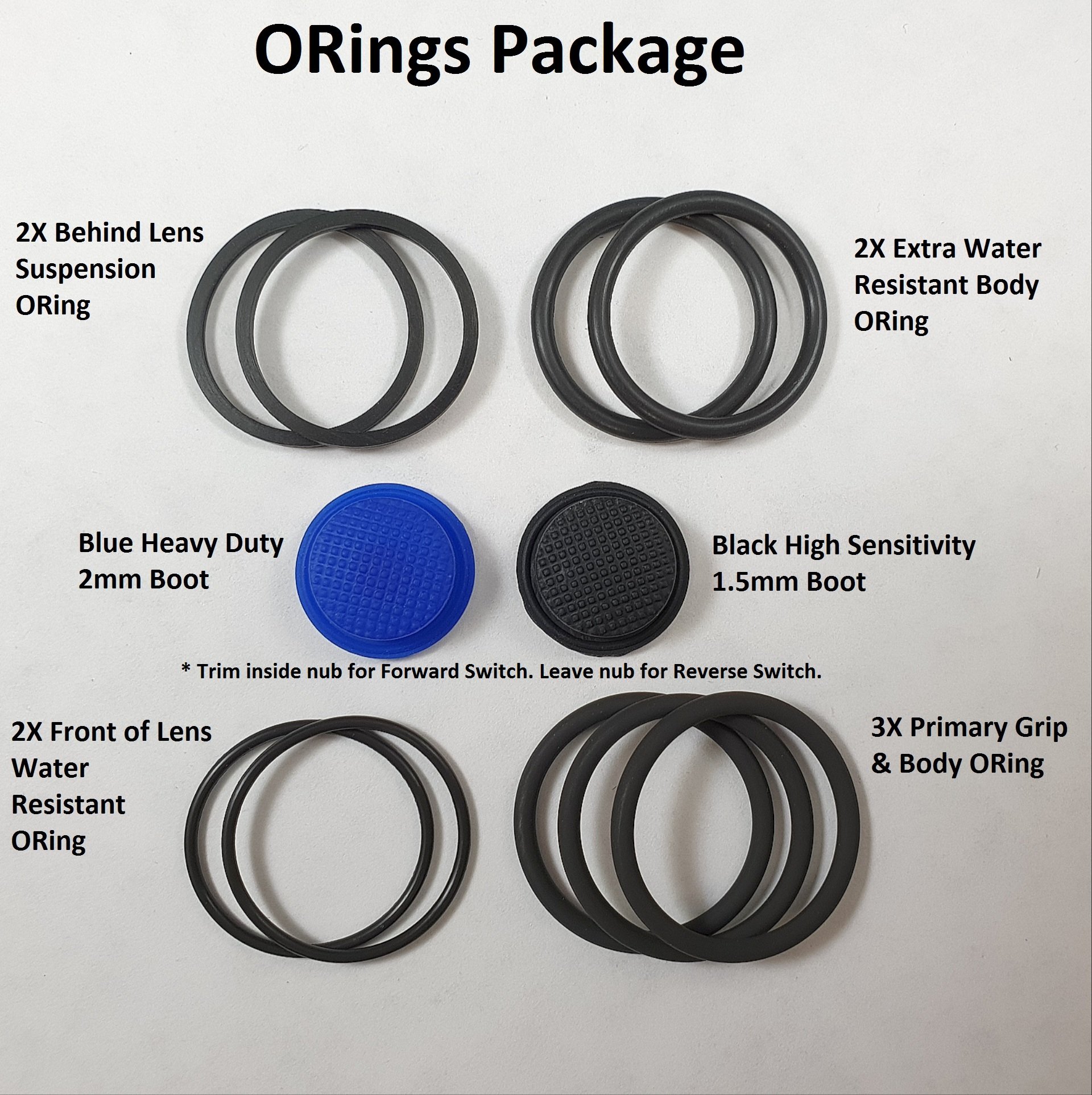 Phuong asked: What is bulletproof? Does it mean tough like a bull?

vinhnguyen54 said:
Phuong asked: What is bulletproof? Does it mean tough like a bull?