dotCPF said:
Mines going great! Around my neck as we speak on one of yours/ Phuong's lanyards! Excellent setup...

I noticed that rustic tange on your instagram..... any plans to sell/ offer that?! I kinda want one, adds a very unique look!
Click to expand...

I accidentally scratched the light so I went nuts on it. Its sold real fast already. ahahha


vinhnguyen54 said:
I accidentally scratched the light so I went nuts on it. Its sold real fast already. ahahha
Click to expand...

All sold out. Restock in may be 1 week. There is quite a line for next batch so if you want one now is a good time. Thanks

The best flashlight yet! I took a photo and posted here: 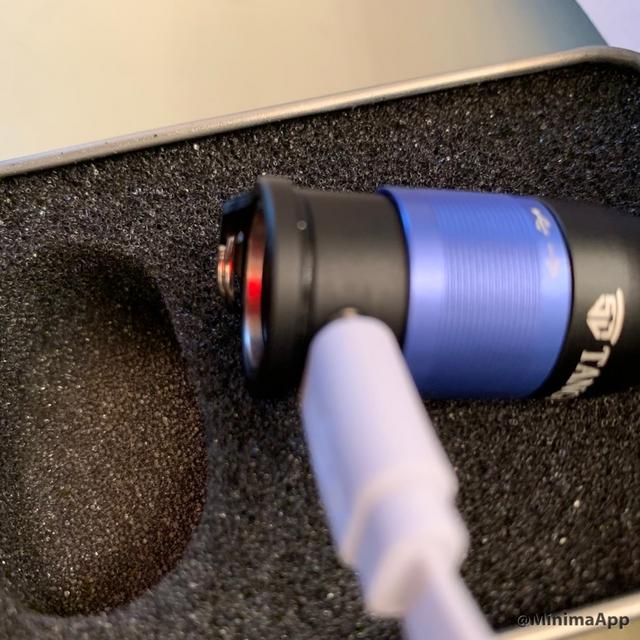 It really is a great light.

Charge your Tange every 2-3 weeks. Its good to have the cells top off.

I extend heartfelt thanks to Vinh for such a perfect keychain light. Just now, I had a rear seat seatbelt buckle get totally stuck and it was only because of SkyLumen Tange that illuminated what was going on so I could fix the stuck buckle.

Also, helping my Mom in her line of work requires me to enter a heavily secured Federal building on a weekly basis. Even the Tool would be too much heft to pass through the security. Only the tiny but perfect SkyLumen Tange was allowed through, every time. Bring on the blackouts! With SkyLumen Tange there is no fear of darkness!

Finally, the SkyLumen Tange is so easy to recharge after use! Magnificent!
B

Is this light supposed to turn on and stay on during charging? I can’t remember. Been a while since I’ve messed with it

Bigburly912 said:
Is this light supposed to turn on and stay on during charging? I can’t remember. Been a while since I’ve messed with it
Click to expand...

Hmm still not able to turn it off or switch modes or anything. Going to let it die and recharge. Will report back. : D
B

Light starts coming on when cord is plugged in. No ability to cut on or off.

Bigburly912 said:
Light starts coming on when cord is plugged in. No ability to cut on or off.
Click to expand...

Yeah I’ll send it out Monday to let you take a look at it.

Bigburly912 said:
Yeah I’ll send it out Monday to let you take a look at it.
Click to expand...

Loving every minute of my Tange V2s, my red one is SUPER well carried at this point, on me almost all waking hours!

Ordered two but seem to have only been charged for the upgraded packaging (one a gift)....?

Received both, one seems fine (so far) in operation, the other, initially performed as expected but then, flashed three times rapidly and now...nothing! The blue tail light doesn't light and, there is no beam of any intensity available upon activation. I have placed it on a charge and, the blue tail light illuminates (non-blinking/pulsating) but, after removal from the charging protocol, still no light. As an aside, it will not illuminate when on the charger either. After disconnecting the charging cable, the rear tail light turns off.