Some Titanium Stuff I made

Hi guys,
just wanted to show you some of my titanium Stuff I made, its mostly Pendants or Keychain hangers.
I dont posess a great many advanced machinery so the pieces you see here are completely Handmade with traditional techniques like saw piercing, riveting etc. No CNC or Laser or something like that was used, just basic tools. Working titanium by Hand is not the nicest experience and takes some time but if you put in some patience it can be done. In Terms of fabrication you are somewhat limited , brazing Titanium is not possible, so if you dont have a PUK or Laser to weld... I had to make the best of what possibilities were avaliable to me.

So here`s some of it:

The first one I ever made was the Ti-Topo dogtag. The Idea behind it was to use a topographical map, use select height lines of the terrain and make a pendant that hows ome of the actual topography of the selected area. This way you can always carry some little piece of "home turf" around your neck. It consists of several distinct layers of titanium sheet which were hand sawn and then riveted together. The river is of cause anodized in blue. 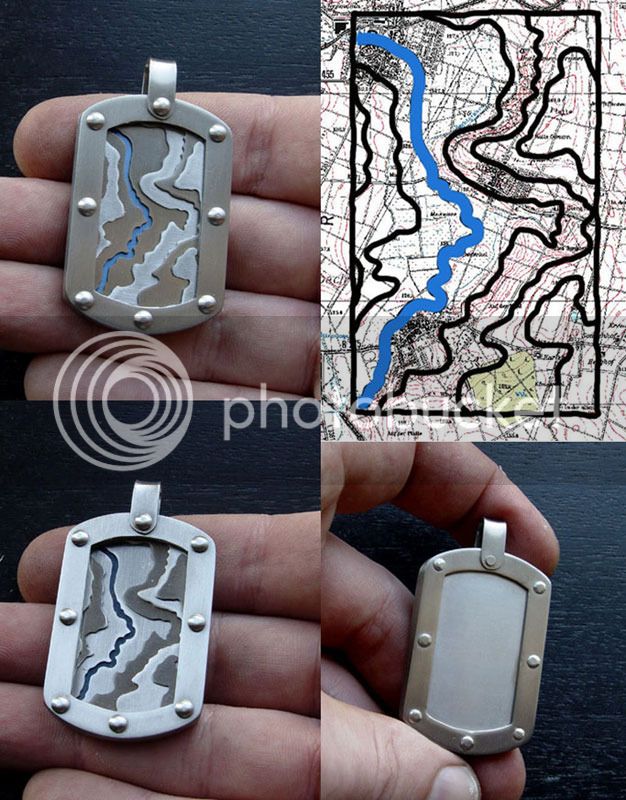 With the same layered technique I made some nice Crusader, Knight Templar themed stuff, since ti doesn`t anodize red I used a special Foil material( Waterproof, UV resistant) to make the red layer. 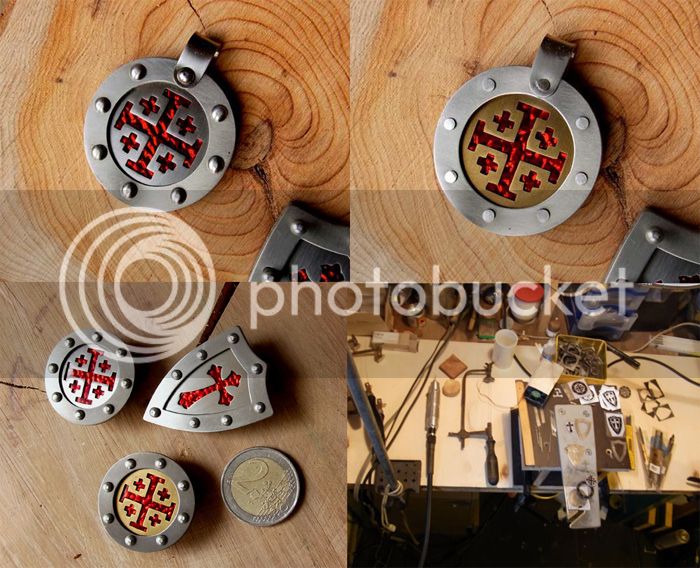 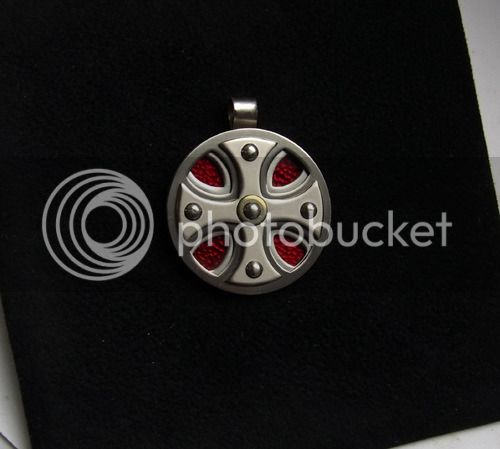 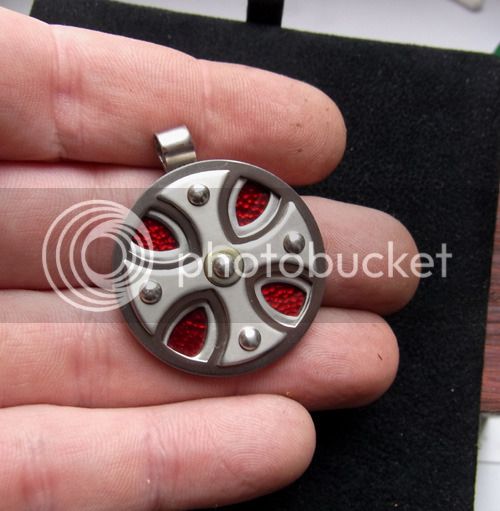 Ther`s also some other Stuff, first is a more architectural approach only using squares and rectangles but still ending up with something interesting, second one I call "the Eye of the (Ti)ger" since it depicts half of a tigers face with the eye in the center. 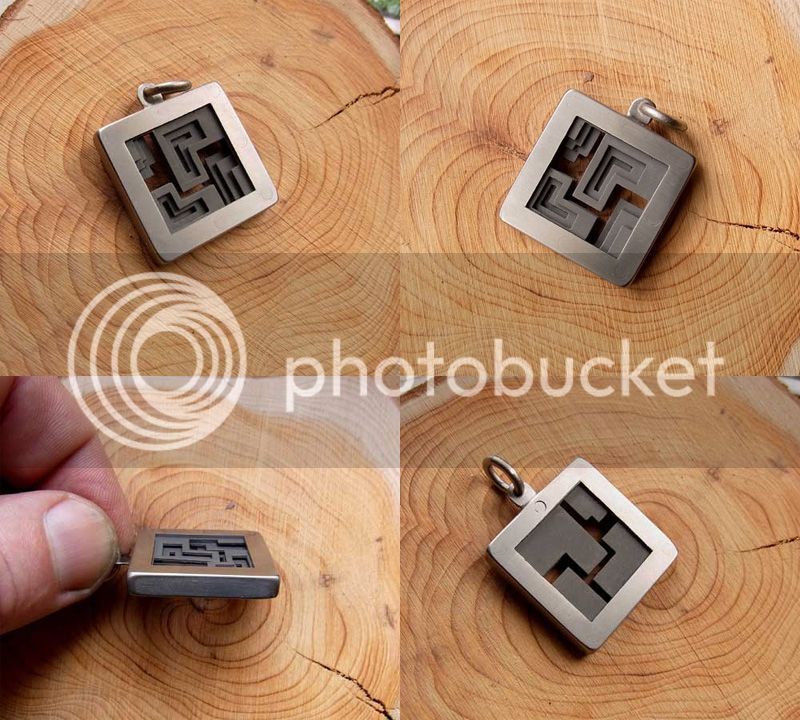 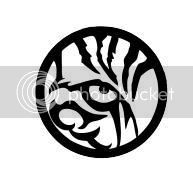 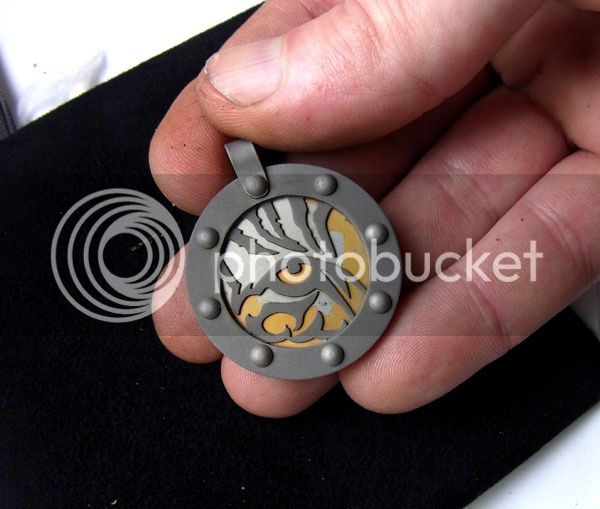 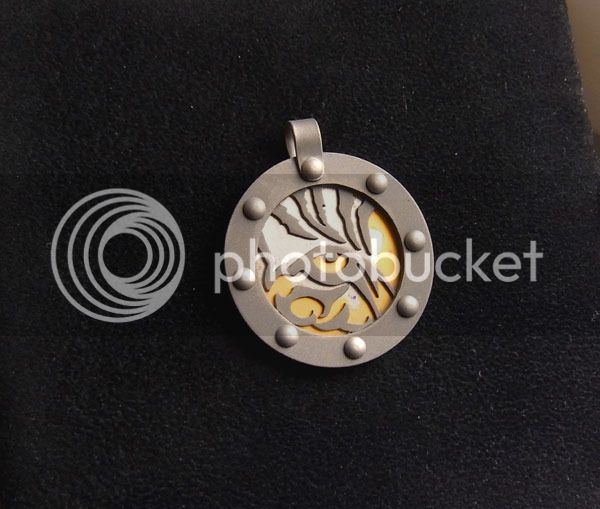 I also do some rather conventional etching on Copper,, Brass German Silver etc. and make pendants of these but since this is about showing the Ti stuff I wont delve into this far. At least here`s one example: 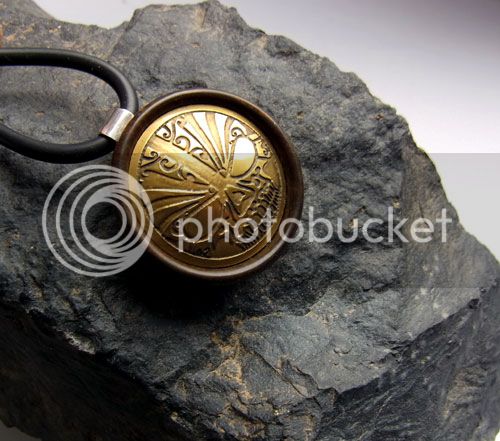 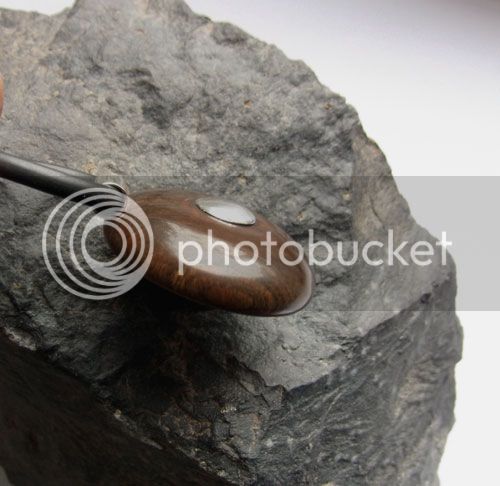 So, thats it so far, thanks for watching!

Congrats (on first post) & welcome. I really like the ones with the red foil material - the riveting goes particularly well with it. Nice work!

The copper work is very nice as well.
R

Thanks a lot!
Well, long time lurker finally came out of the woods...
FYI, the wood on the last one is Lignum vitae, one of the hardest and densest woods out there, since its so hard it takes a nice shiny polish without any kind of laquer or someting else. These style pendants were inspired by the japanese kagamibuta-Style netsuke (Kagamibuta= "mirror-lid netsuke" - shaped like a manjū, but with a metal disc serving as a lid to a shallow bowl).
I always liked the style and combination of wooden base and patterned metal motive. Shame i cannot etch some nice titanium inserts. It really doesn`t lend itsself to etching. Other metals are much easier to do.
Well, i Just would have to get me a nice Laser or 4-axis precision cnc - but these are ranging far above at what I could afford. Since I like to do all the stuff myself I`m restricted somewhat in the avaliable techniques in titanium. But as you can see, thers`s still some nice Stuff that can be made without resorting to high-tech solutions...

:welcome: Took you long enough to finaly post something here...... Really cool stuff rolynd! Everything looks well made and designed. As a surveyor I really appreciate the topo dogtag

That is awesome. PM me if you would like to sell any of those. I love the fact it is hand crafted. Thank you for sharing!! Keep up the great work my friend! I love that Shield with the Cross.

Str8stroke said:
.... I love that Shield with the Cross.

The entire time I have been on this forum, I have always wondered when that particular icon would ever get used ... congrats @Str8stroke & @rolynd

That is awesome. PM me if you would like to sell any of those. I love the fact it is hand crafted. Thank you for sharing!! Keep up the great work my friend! I love that Shield with the Cross.

This isn't a sales thread and shouldn't be treated as such.

Rolynd is quite welcome to place a sales thread in WTS: Personal Gadgetry - Other should he wish to sell any of his creations.

Amazing work,outstanding :welcome: a true talent you have !
A

That is very nice work, I also have a jewelers saw and I know from experience work of that size is hard to do with all that negative space.
I have no experience cutting titanium how does it cut compared to brass, copper etc?
You must log in or register to reply here.
Share:
Facebook Twitter Reddit Pinterest Tumblr WhatsApp Email Share Link

Tom Anderson of Artistry in Titanium?

any of you into chi fi? Chinese made hifi portable gear?

is this watch what i want?
2

J
How Can I Determine What Charger Is Needed To Charge A Garmin GPS Battery?

im a sony fan boy and i admit it.