To start, it's a forward clicky on/off little shirt pocket sized flashlight with a cool white beam that's fairly floody. On the wall it's ringy but lighting up a 50x50 area of my backyard is artifact free and it disperses light pretty evenly. At 50 feet away it does well at lighting objects and spill is about that wide also at that distance.

Button travel light easy for momentary but fingertip is best for full time on since the button partialy enters into the tailcap before the click engages. For microstream owners it's pretty much the same tailcap.

Now the 360 part means the tailcap has a rubberized sleeve over it to form a flat surface for tail stand. Pull the bezel away from the light to reveal a lenses that is about 1/4" high all around the light. Hence the 360 name. To me it's too bright in 360 mode due to a clear lens. Fine if you have it above your eyes, but on a table top below eye level it is just too bright to look towards the light. If you've ever removed the head of a minimag and looked at it……it's like that.

I scuffed the polycarbonate 360 lens to no avail. It needs to be frosted. I'll work on that tomorrow. Frosted glass paint is the idea.

It's a cool idea in theory and it's a great little light for lighting up a shed sitting on a shelf or hanging from the ceiling. It's also a really good light in normal mode while working under a car, plumbing work under a sink and such.
I paid $28 at Bright Guy. 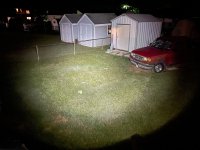 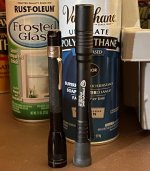 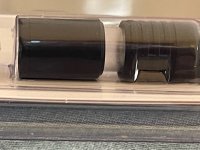 I scuffed it well but still too bright for me 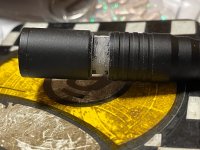 So I painted it with transluscent nail polish 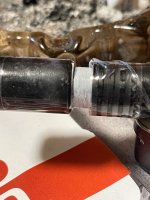 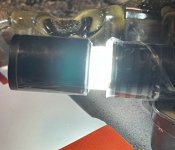 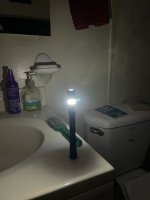 Did the plastic credit card thick chip mod too. 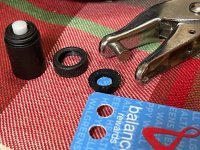 any idea on the color temp of the LED? I really like the light, but I already have a domed Maratac AA light with 2 light levels and a beacon flash and a Maratac Ti 2xAAA penlight (not crazy about the color temp though) which has 3 light levels. I recently acquired the Maratac Compact Tri-flood 14500 and it is the perfect partner to my Four7s Quark MarkIII Qk16L... the color temp is just... ahhhh, love it.
Share:
Facebook Twitter Reddit Pinterest Tumblr WhatsApp Email Share Link