Keep in mind, some lights show more than others. Also, I've been using these lights for years and never noticed. I don't consider it a defect or a problem. The advantages of the rotary interface far outweigh the instability. If you want to see real instability, I suggest you try and peak light with qtc. That I couldn't live with.

The only reason I noticed is because I pointed it at a white wall and slowly rotated it looking for any fluctuation.

I don't do that in use nor do I carry a light meter when I'm using a flashlight.

Please keep that in mind. Some things matter in use. Some don't.

If it matters that much to you, buy an hds rotary and measure it. It will likely not fluctuate. Or just avoid rotary control lights.
Last edited: Jul 6, 2017
J

gunga said:
Some things matter in use. Some don't.
Click to expand...

I own a light meter and enjoy testing the lights I use. You don't own a meter, and enjoy using your lights without testing them.
We both get to do what makes us happy

I still think you should buy an hds rotary. Measure it. And report about it. I would like to know.

I received my light meter, and have to preface all my comments by saying I find the meter a bit quirky and will need to spend several more hours before I am reasonably sure of my accuracy. Having said that, my lights appear to mimic Selfbuilt's and your findings astoundingly close. I will pm you so we can send videos back & forth but also wanted to share my findings on this thread. I tested 4 of my 6 V11r's (one stock, one Mirage and two modded by Vinh(no difference-all 4 had the same lack of ability to maintain consistent output). I tested four other Sunwayman lights M11r's, V10r,TiV10+Vn, and they held readings without the loss of output consistency. When I have time, I will test other lights with control rings as well. One key point: as obvious as these changes are on the lux meter, in real life use they are not noticeable at all to me(your experience may differ). To be consistent all my testing was done on fresh fully charged 14500 cells.

gunga said:
I still think you should buy an hds rotary. Measure it. And report about it. I would like to know.
Click to expand...

And then send the HDS to me for confirmation and a trial period of no less than a few years...[emoji1]

So v10r don't vary like v11r? I can back that up with visual confirmation. Things get a bit confusing because one of my ti v10r may have a v11r driver (I was customizing it).

Still seems to be current on the USA site. Still sold.

gunga said:
Still seems to be current on the USA site. Still sold.
Click to expand...

Thanks. It would be nice if they ever do neutral again. I have a Vinh modded neutral. V10 and V11 are nice lights.
J

recDNA said:
It would be nice if they ever do neutral again.
Click to expand...

however, that neutral is not High CRI

you can also get a warm or neutral white V11R from gunga, he does excellent work and has some really nice High CRI options

however, that neutral is not High CRI

you can also get a warm or neutral white V11R from gunga, he does excellent work and has some really nice High CRI options

Neat! $77 is a little pricy though. I know. I'm a pita. My Vinh model didn't cost much more than that. I will think about it but I expected it to be like $40

What are the triples?

What is the light on the left?

What the tint look like on the Neutral v11r?
J

The stock Neutral is LOW CRI. I agree that is not the best deal.

The Mecarmy pictured are NoPWM lights. The V11R is also a NoPWM light, here is a short test of that with the Warm High CRI Nichia.

How Our Eyes Work
Our eyes can be quite insensitive to some types of brightness changes.

Below is an excellent explanation from HDS, how it works, that people do not notice PWM, fluctuations in brightness, constant current ripple, regulated current with a feedback loop, circuit noise, and other circuitry that do not provide fully regulated output. A light meter, and sometimes other instruments such as oscilloscopes and cameras are Required to “notice” some changes in brightness, such as really fast ones, or gradual ones, or small lumen amounts.

Most people would Not notice the fluctuations in the V11R in use. Even selfbuilt, who Knows its there, does not care.

quote from HDS Systems in italics:
Your eyes have a non-linear (logarithmic) response to light, much like a camera. In order to notice a significant increase in brightness, you must double the amount of light. In photography, this doubling is referred to as an f-stop. For our purposes, the f-stop is a convenient unit of measure and we will use it when referencing relative brightness. To put this in perspective, if you suddenly change the brightness by 20%, you will notice just a slight change in brightness. In fact, if the change takes place over a couple of seconds, you may not even notice.

In my case, Im interested in Light Meter readings, because it informs me about potential battery life, among other things. I don’t want a light that increases its brightness beyond where I set the dial, because that drains my battery faster than I want it to.

This is not to say the V11R is not a fascinating light, for many reasons, and Im not in any way criticizing or judging anyone that enjoys theirs. I do believe that ALL V11R, and ALL magnetic ring lights would probably exhibit similar unregulated flux as the V11R. This is not a single defective light. The Light Meter response I am discussing IS universal to the design. I invite anyone that would speculate otherwise, to put a Light Meter in play before repeating a phrase like "I don't notice in actual use"

I posted in this thread to discuss Light Meter readings of the V11R, because I discovered a fascinating flux in brightness.
“I don’t notice it in actual use” misses my point, that the V11R does not have regulated output, that the brightness continues to drift in the direction of the last dial turn, and that even rotating the light in the Earth Magnetic field, will produce similar results as rotating the magnetic ring around the light.

On a light meter, the V11R changes brightness, at times by more than 30%. I think its worthy of a science class show and tell, about how the earths magnetic field effect can be seen with an LED!

fwiw, the Earth Magnetic field also pulses, within a narrow range, it has PWM, fluctuations, not fully regulated, hence the beauty of the V11R as a natural candle with fully entrained synchronization.

< begin marketing hype> Imagine a Warm nightstand candle that glows with the Rhythms of the Earth. Imagine the movement of your lover illuminated by the warm rhythmic glow. ;l-) < end hype>
Last edited: Jul 14, 2017
O

Question on the V11R: does it behave differently with RCR compared with CR123a when getting low on juice? I thought generally that RCRs "just go out" with little to no warning whereas primaries go out gradually, which itself is a type of warning. So first, is that true in general, and second is it true specifically for the V11R?

Sent from my Pixel 3 using Tapatalk

ozzie_c_cobblepot said:
Question on the V11R: does it behave differently with RCR compared with CR123a when getting low on juice? I thought generally that RCRs "just go out" with little to no warning whereas primaries go out gradually, which itself is a type of warning. So first, is that true in general, and second is it true specifically for the V11R?

Sent from my Pixel 3 using Tapatalk
Click to expand...

No...output is about the same but a CR-123A has roughly three times the capacity at approximately the same voltage.

I thought these were gone, but saw one in stock at Amazon and bought it. Seller has already restocked.

Does the V11r have current regulation? Could that be what jon_slider's brightness variability video above is actually showing, the driver trying to maintain constant brightness?

Does the V11r tail stand?

Rather than use the OEM clipped-on clip, I'd like a clip screwed on. Tail shroud has a big hole in it, can't tell from pics, but it might be too big for an acceptable clip screw. And one screw won't get it done... maybe the hole is big enough for two screws at either end? Anyone know of someone who can drill clip screw holes and screw a clip onto mine for me?

Edit: someone has done it, so here is the proof of concept: 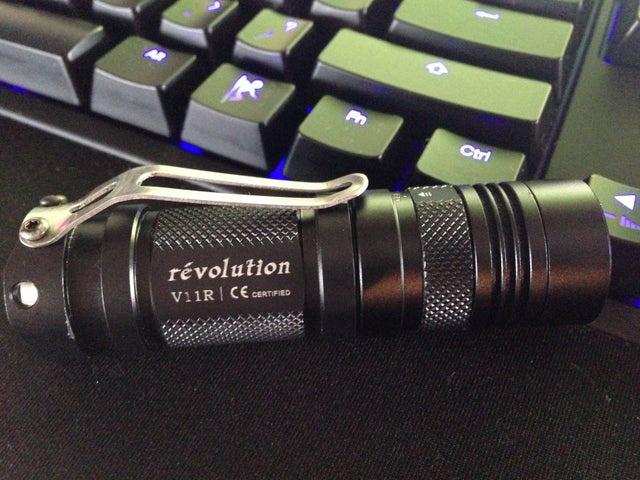 I can't do this myself. I'll need someone with tools and skilled hands to contact me about this.

This is what I hope to get on there: 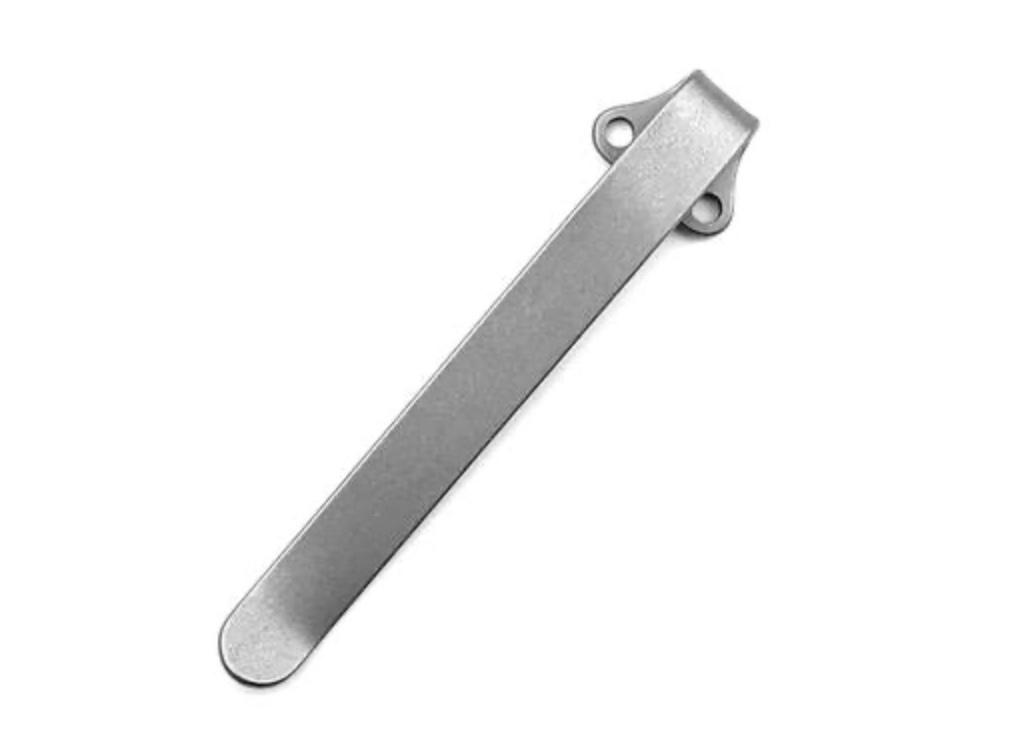 Edit2: I was reading about Vapcell INR14500 L10 1050mAh 3A cells at vapcelltech.com, did a search and saw them for sale at Vapcell's AliExpress store, just went to look at the prices, and I saw that the shipping notice for Li-ion changed from "No shipping to United States" to "Free Shipping to United States via Seller's Shipping Method. Delivered before 11/21 or full refund." So I searched for Vapecell INR14500 H10 1000mAh 10A cells in Vapcells AliExpress store, and it had the same shipping notice. I immediately ordered 8x INR14500 H10 1000mAh 10A button tops. Paid about $7.30/cell after the AliExpress PayPal charge, which is a lot more than Liion Wholesale was selling them. Watch, in a week Liion Wholesale will get them back in stock for $4.29 before shipping, and you'll get yours a lot cheaper and long before I get mine. :/
Last edited: Sep 24, 2020
Share:
Facebook Twitter Reddit Pinterest Tumblr WhatsApp Email Share Link