Instead of derailing Five-Mega's interest thread here's a place we can discuss Tad's Customs bi-pin adaptor for our A2's.

I just bought my A2 used a couple days ago and it has yet to arrive. I've never owned any Surefire before so when my A2 arrives it will be SF #1. In any case, I've preemptively ordered a few different things for it including one of Tad's Custom's bi-pin bulb adaptors.

Tad and I have exchanged several emails over the last 24 hours. He is gauging interest on the forum before doing a full-production swing. I should have his adaptor, a 4.8v bulb and a 3.7v bulb by the end of next week to pit against the stock Surefire bulb. Obviously, I won't be able to vouch for long-term endurance but I will be sharing my subjective opinions on the product with Tad and on this forum.

Tad's been very proactive about this so far. I think this is a good guy who is trying to fill a niche here and I'm happy to take the initial plunge and see how his stuff works. I don't see it as a rip on Five-Mega either; I'll still happily buy one of his as his workmanship and quality are legendary. Tad's just working on another option for us, so I thought it worth looking into.

Before rushing to the order page at Tad's Customs for A2 adaptors let some information spill in over the next couple weeks. He said he wants to make sure he's offering something people actually want before swinging into any sort of full production. He sent one of his two already produced units to another CPFer and is sending unit two to me. He told me he had produced these in the past for the Asian market and it was a successful product.

Anyway, that's the deal as of now. I'll add to this post as more things happen and more information becomes available.

The Mag G4 unit I ordered late yesterday from Tad shipped this morning.
Got a tracking # too. It's coming via priority HKPS to priority USPS. That in past experiences with products by others has equated to about 8 calender days.

Just throwing that out there folks.

Looks like a void is being filled so the few folks still digging on incans will have some choices.

bykfixer said:
The Mag G4 unit I ordered late yesterday from Tad shipped this morning.
Got a tracking # too. It's coming via priority HKPS to priority USPS. That in past experiences with products by others has equated to about 8 calender days.

Just throwing that out there folks.

Looks like a void is being filled so the few folks still digging on incans will have some choices.

I'm still hoping fivemega does some more A2 stuff.
Click to expand...

Exactly. Being able to support two people supporting our habits is awesome. I hope Tad's product is solid and works out. I have no reason to think it won't. He seems genuinely interested in making this niche product well and to our liking. Everyone else, keep us up to date on other products from Tad that you get and what you think of them. We might have a real winner here.

About Five-Mega, I've never had anything of his but I'd love to. Getting a guy with his reputation to have interest in us incan-freaks is totally awesome. Anything he puts out for the A2 will have my interest for sure. He's a definite heavy-hitter on the forum and a sure bet with your dollar.

I wanted to add that I don't have anything good as far as video/camera equipment so I probably won't waste my time with beam shots or anything. I may or may not do a YouTube video, but at the least I'll do pictures of Tad's adaptor and the beater A2 I'm getting.
Last edited: May 27, 2016

I use a celphone for beam shots.

The trick is the location you choose and the distance. The camera does the rest.

I chose a wall behind my house 15-20' away from the beam. Shows the spot.
It has a right angle to show the side spill. Btt:
Knowing the topic is the A2, fivemega also has a site called nitemods. There you'll find products based off the 6P.
Last edited: Dec 9, 2017

I'm definitely interested in these. His price point is very good and the bulbs are very inexpensive so a life time supply only costs a small amount. I am more curious in the 3.7v bulb as I would like max lumens, but I'm also curious about how the 4.8v bulb runs at the A2's 4 volt output. It could be a nice option to have a few of these as well.

I hope a production run is in the future even if it is a limited one to start with.

Well so far he is planning to make them. As of now he has only two on hand that are now spoken for. I think it's just smart to have someone on the forum look it over before we flood him with orders. He won't have them ready for two weeks at a minimum anyway. I should have my A2 and Tad's stuff in hand by next weekend to review if USPS decides to be timely...

Thanks for the tip, bykfixer!

If you are able, some comparative lux measurement of the stock A2 bulbs versus Tad's would be nice.

Any chance for E-series bipin adapter ?

Anyone wants to test this E1/E2 bi-pin socket? Please email me. I will try to finish two samples in 2 weeks.

Thank you Jim. I will wait for your review before delivering the A2 bi-pin sockets.

I just recently retired my A2's. Have no more bulbs for them and the cheapest bulbs I could find were all around $30 w/shipping.... Very interested in a way to get these back up and running.

Glad you're on the forum Tad. I think a lot of people are going to be really happy to have somebody like you here to help us breathe new life into our old Surefire lights!

My test mule arrived today. This thing is a solid user and it shows. I love nothing more than a well-worn tool.

Slightly off topic but a bow to Tad... 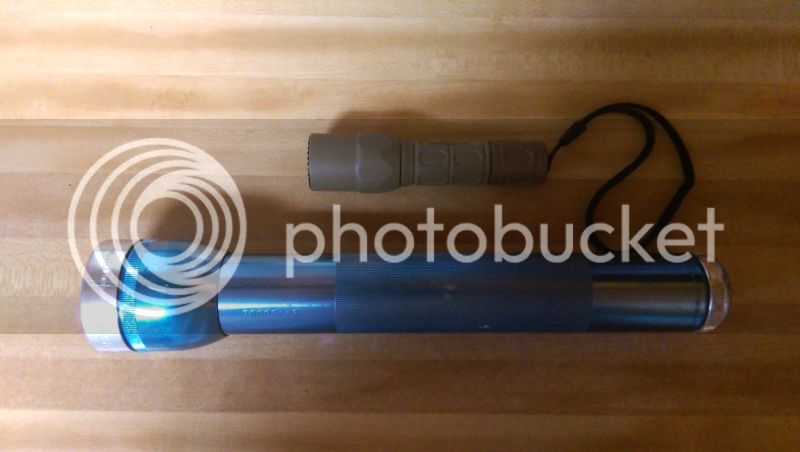