I got flamed for saying in the Elzetta thread "some folks buy a Sherman tank and complain about the ride quality."

bykfixer said:
The lanyard attachment may not be "meant" as a kubatan in the design aspect but used correctly can become one. View attachment 37661
4 objects with kubatan potential.
When folks ask me why I edc finger nail clippers I say "it's a self defense item".
Click to expand...

Honestly, no offense. No clue where you're getting your info. from. Genuinely hoping you didn't pay some con-artist pretending to be a self-defense expert. None of those are Kubatons. A Kubaton is a very specific thing. Has literally nothing to do with crenulations, or lanyard attachments. You can't turn any object into a Kubaton just by giving it a lanyard or keyring attachment point. It doesn't work that way.

And while typing this, I just realized what you might be talking about. Do you mean attaching a keyring to a lanyard hole, then attaching a bunch of keys to that keyring to swing in a figure 8 pattern at an attacker's face? If so, yeah; you got lied to. A Kubaton is not a handle for swinging around keys at an attacker's face. A spoon, a tiny pocket knife (I own that very Gerber model as well), a set of nail-clippers, and an extremely small and short flashlight.... none of those have the potential to become a Kubaton. None are a 5" to 6" cylindrical length piece of metal or wood with a diameter of roughly 1" to 1 1/4."

Takayuki Kubota came up with several techniques to go with the Kubaton. Including wrist and finger pressure-point techniques. Those techniques are literally impossible to perform with a short, flat pocket knife. You need something that fits the proper description of what a Kubaton is. Something like the original SureFire pen certainly does. A wooden dowel sanded down and shaped properly certainly does. While you could add a ring attachment for your keys to it, it's not an absolute requirement. But you can't just attach a split ring to any old object and it becomes a Kubaton. You can't just grab something that has the proper length, but is made from thin metal (like a spoon) and call it a Kubaton.
Last edited: Jan 15, 2023

bykfixer said:
Kibatan is an action, not a product
Click to expand...

I hate to disagree with you, but I expect it won't happen very often. The Kubotan was invented by Sōke Takayuki Kubota in the late 1960s and is an enhancement of the hashi stick, a small bamboo weapon, invented by Kubota's father, Denjiro.

Personally, I like to keep my distance from possible tainted blood with who-knows-what these days

Jawara stick is a different creature. Some folks think it's a very obese Kubaton in terms of thickness. That's what it is now. But when originally produced it was a more complicated creature that was once marketed as a less-than-lethal option for law enforcement agencies. Actually a handful of such agencies adopted it. Unfortunately the complex techniques required to use it, and being in absolute close proximity to a suspect is why it soon fell out of favor many decades ago.

And here I thought they were chop sticks lol

Do not try to bend the spoon. That's impossible. Instead only try to realize the truth. What truth? There is no spoon.

chillinn said:
Do not try to bend the spoon. That's impossible. Instead only try to realize the truth. What truth? There is no spoon.
Click to expand...

Hey, not trying to make you feel bad or flame you.
Just trying to clear things up. You've been on CPF long enough that I know you would never intentionally spread misinformation.

Nearly 30 years ago I started my journey into the self-defense world because of something I saw on a TV talk show as a young teen. Guy in his 50s who looked like the most boring accountant in the world. Being hailed as a respected self-defense expert. Teaching women how to protect themselves. He demonstrated that Figure 8 "Swing your keys at an attacker's face" technique. Or, back when cars had external antennas, take an antenna off a car and whip your attacker in the face with it.

Even back then, with zero S.D. knowledge and training, I knew none of that was going to work. How many women got R. because they listened to him? As someone who teaches S.D., especially to women, it's important to me to point out misinformation when I see it. Even when I know it's not being put out there intentionally. Genuinely nothing personal. And, I apologize if I came off that way towards you.

knucklegary said:
Bless the spoon and the hearty soup Byk enjoys eating with it 😁
Click to expand...

What the heck, blatant honesty.... I do have a favorite large spoon I enjoy using for soups and stews. It's not part of a huge dinner set. Just that one large spoon. We all have our favorites.

Sigh! My feelings are not in any way bothered except to say "that's an hour of my time I'll never get back".

My e2 battery/bulb setup to keep in an edc pack or what have you.

Lumens factory 7.2v 150 lumen bulb installed with spare cells in the sc1, and a 3.7v 90 lumen bulb in the sc1. I found that e series lamps fit perfectly inside a lumintop tool aa diffuser, which in turn fits perfectly in the sc1. Then I have two 16650’s in the case tethered with shock cord to the sc1’s lanyard. 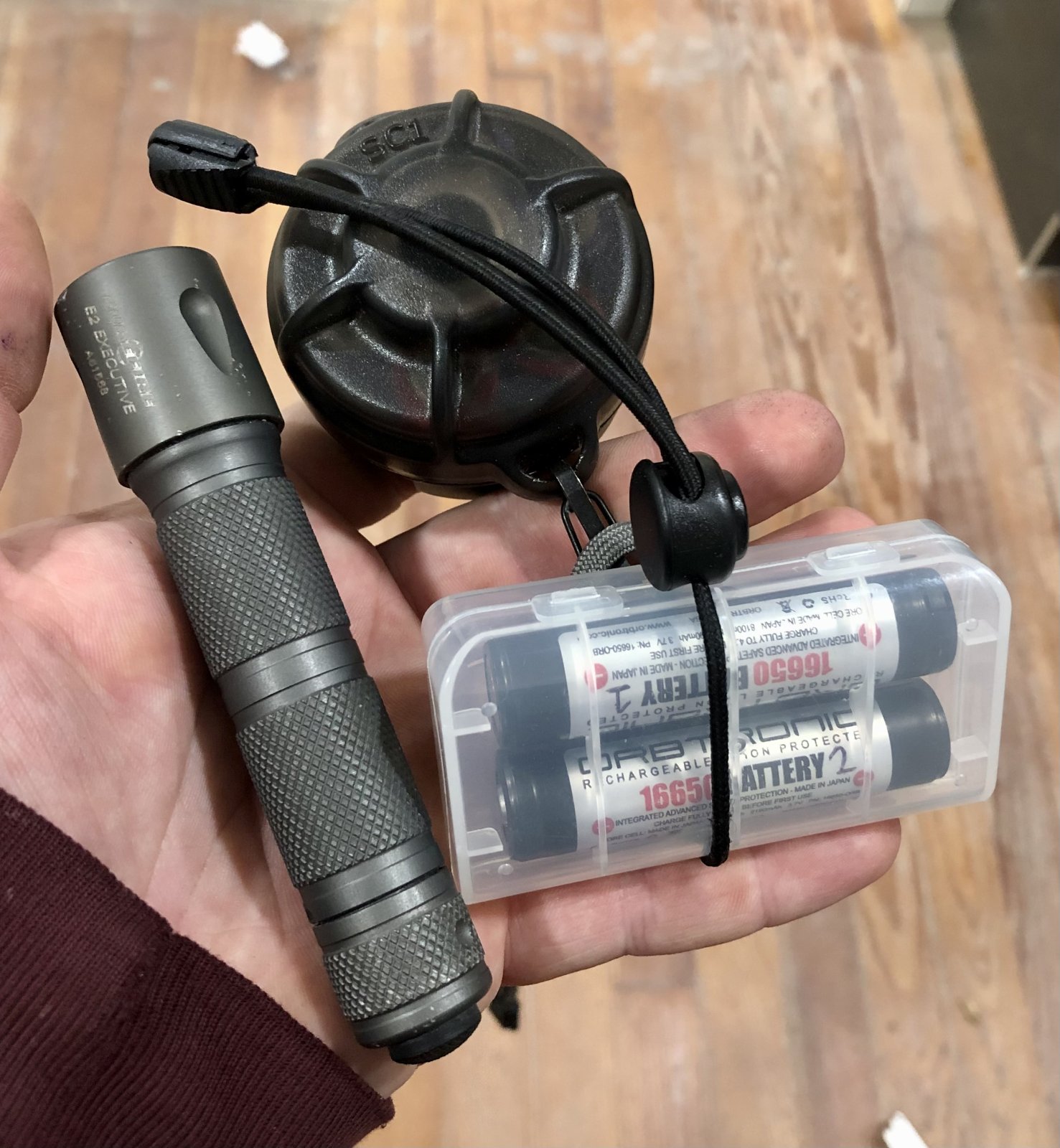 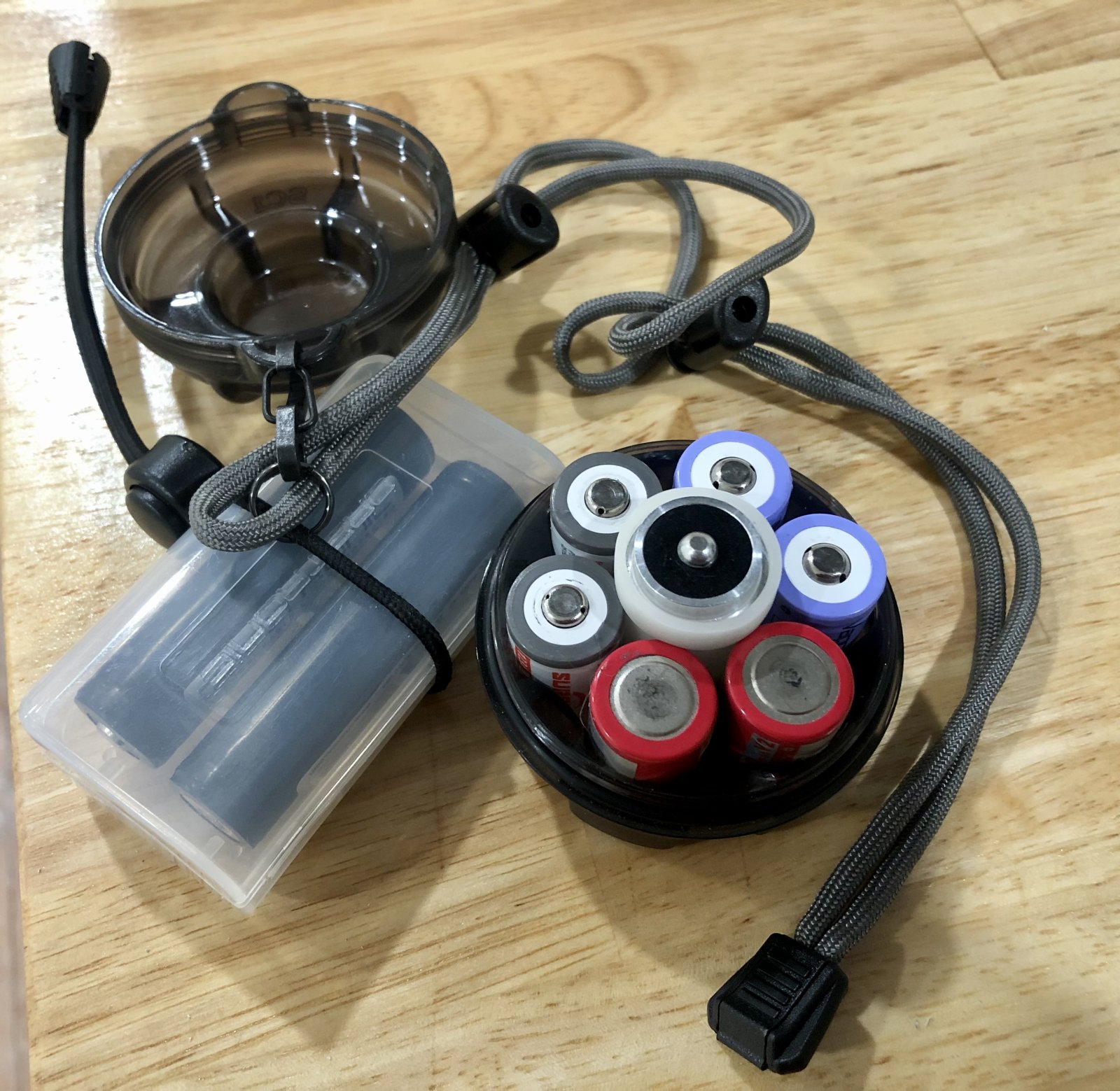 What lamp are you running that takes two Liion? EO-E2R? IMR-E2? ah, EO-E2R, I didn't read closely enough the first time. Nice set up. I recommend the Lumens Factory E2 Classic body for 18mm cells and more runtime and z52 tail cap, plus can save your original body and z52 from wear.
Last edited: Jan 21, 2023

Yes, it’s the EO-E2R. Since seeing your post about them I’ve been wanting to try out their e bodies, pretty slick setup.

Im not too worried about dinging this one up, just gotta be careful to not gouge up the lens and especially not melt it. I melted an old style 6p head with a 200 lumen EO-6 bulb and that wasn’t great.

Megalamuffin said:
just gotta be careful to not gouge up the lens and especially not melt it.
Click to expand...

The Tear Drop incan head has a plastic lens?!? Why have I never heard this. I'd be running MN02 exclusively.

In single primary cell, MN01 come up earlier today. I was going to purchase tomorrow at 9:20AM, which is how fast I could get home from the bank after depositing some cash when it opened. Someone beat me to it, of course. Those hardly ever come up anymore. Wanted it for my E2EL AA w/ Elite head. It's much dimmer than HO-E1A 1.15A 40Lm at 15Lm and est. 1.03A, thus provides better runtime. Also, IME it is more durable. And 40Lm is surprisingly too bright. 15Lm is all I want in that E2EL AA. My compromise is Tad's A6010 1A lamp, which I still have a handful of, but it is a 6V lamp and doesn't give 5Lm on 2xAA. But it is still good for predawn sleepy-eyed mornings.
Last edited: Jan 22, 2023

chillinn said:
The Tear Drop incan head has a plastic lens?!? Why have I never heard this. I'd be running MN02 exclusively.
Click to expand...

I’d love to use an mn02 but haven’t been able to find any that weren’t crazy expensive. The EO-E2R seems fine with the plastic lens. As long as it’s not too close to something while on I don’t think it’ll be an issue. My 6p melted because it turned on in my pocket while I was on the couch, and was in one of those spare magazine pocket carriers so I didn’t feel the heat. As a precaution I don’t let the eo-e2r run any longer than necessary.

The assumption I made that might not be true is that more current means more heat. It is nice that MN03 is still readily available, as there are no more Tad Customs E sockets or A series lamps to be had, plus it works well on 1x Li-iion, and will still fire on 1x CR123A, though it's not remotely ideal for a single primary.

I really need to get two MN01 from somewhere and take care with them. I just need 2, but I could use 6, as I have 5 2xAA setups, and I want to get one more. As my luck would have it, I missed two more for a sweet price on Friday. :/ Bizarre they haven't been seen on eBay for long awhile and in one weekend 3 appear from two different sellers.

I owned two HO-E1A, and I only used them with two Eneloops, and neither lasted 10 hours. Could be two Eneloops doesn't reach their ideal voltage and reduced their standard lifetime. But for my incan tastes, they're just too ampy, too bright, and too cool. But that is who Mark is catering to, the lumen junkies, and I expect they're happy.

I use MN02 a lot, but it's only for the long runtime and that brightness. The color temperature on one secondary is not that great. My favorite lamps are Tad's. A3712 gives a beautiful glow, just the right brightness, temperature and tint. A7212 is similar, just brighter. And A6010 color and tint is in a class apart when running two LiFePO4. I use one on two NiMH, but I'd use them more if I could find any IFR14500 with any capacity. 650mAh seems to be as much as they'll ever give. That's like 35 minutes.

Tad actually sent me a demo A3012. I used it exclusively on two NiMH, but it also didn't last very long. Nice light from it, but too much current for what I need. Maybe there is something about low voltage lamps that prevents them from giving a lot of hours. MN01 seemed to last a good while, but I'm not sure how long because I accidentally murdered the only one I ever had with two secondaries not paying attention.

If I was into this stuff just a few months earlier then I would have been able to get a tads socket and bulbs before he went out of business. Oh well.

What kind of runtime did you get with the HO-E1A on two aa’s? I plan to acquire an e2l-aa outdoorsman for the body and use an e2 incan head on it, so if the ho-e1a works well then the hard to find mn01 isn’t the only option for that setup.
You must log in or register to reply here.
Share:
Facebook Twitter Reddit Pinterest Tumblr WhatsApp Email Share Link