Coolwhite said:
So had the edcl1-t for about a week now, carried it pretty much every day, it is a great light so far.
Likes:
Clip allows position of light in different positions in your pocket depending on the type of pants you are wearing.
Excellent form factor.
Gas pedal Ui is great to use.
5 lumen low is easily bright enough for most edc purposes if it is dark.
500 lumens is ridiculously bright should you need it.
Surefire build quality is damn good.

Originally was concerned would be a bit big for EDC but given the clip and form factor, this light carries very well, honestly don't even feel it in my pocket when clipped properly.

Here is a pic of a couple of other lights for size comparison, was something I looked for before I bought the light but couldn't really find.
Anyway if you are thinking about buying one, you can, it's a great light.
View attachment 18234
Click to expand...

It is a great light! The body can get a little slick at times in my hand but beyond that the light is a great EDC.

I finally pulled the trigger on an EDCL1-T. I'm excited about it, but I bought it from the big river, which I would not normally do for fear of counterfeits. It's probably okay, but the first thing I noticed is that the packaging looks different than what I've seen online. Is this legit? 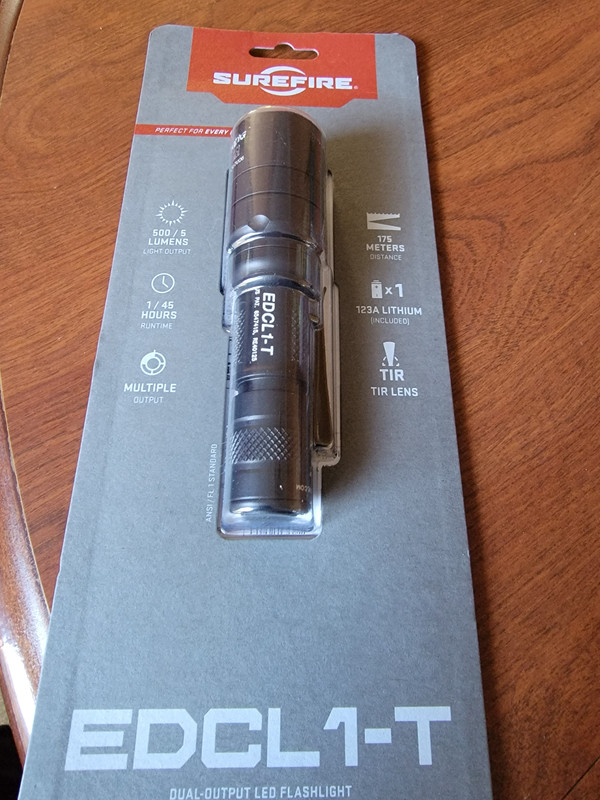 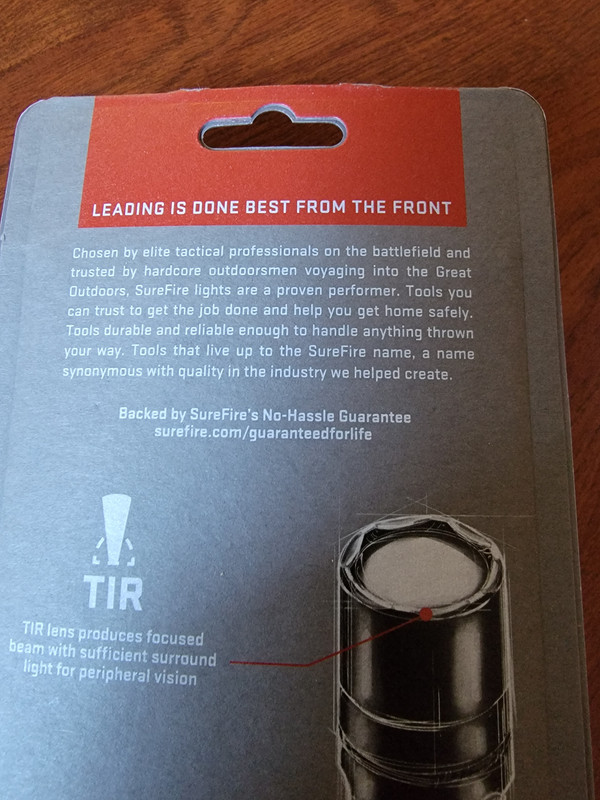 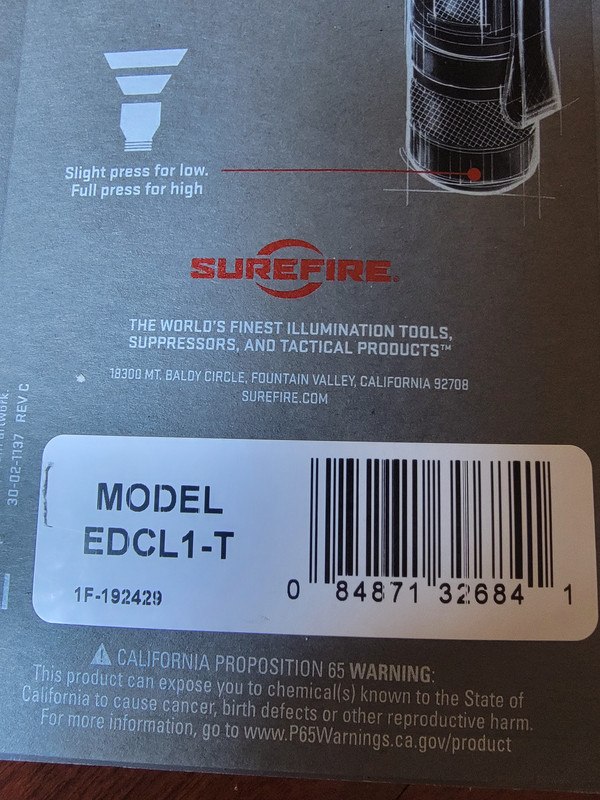 I found my box, but the top is cut off. Can't remember where I bought it, maybe BHP.

Modernflame said:
I finally pulled the trigger on an EDCL1-T. I'm excited about it, but I bought it from the big river, which I would not normally do for fear of counterfeits. It's probably okay, but the first thing I noticed is that the packaging looks different than what I've seen online. Is this legit?

This box is very much the same as the box that came with my defender recently.

The low beam flickers significantly, regardless of whether I'm holding the button or tightening the tail cap. Sometimes it skips low altogether and hops straight into high beam. Contacts look clean. Verified the battery is good. Is this a warranty situation?

This is the first I'm hearing of this, do you know which other SF lights are exceeding the max current draw of CR123s?

It does seem rather silly that we put batteries intentionally designed with vent holes into o-ring sealed aluminum tubes and then exceed their design specs. I didn't see "tactical grenade mode" as a design feature, maybe I should consider changing my username if my hands are actually more at risk.
Last edited: Dec 8, 2021

I cannot confirm this but first time I used it on high for about 5 minutes the entire light became a pocket warmer. I turned it off and removed the batteries. They were much warmer than I was comfortable with. I felt like I was walking around with a hand grenade with the pin pulled.

I have not heard of any catching fire or exploding, but mine is a shelf queen now. It's output impressive no doubt, but I just didn't feel comfortable using it anymore.

In anticipation of the new EDC1 ( which will probably kill this line? ) I decided to get one of these for myself.

First thing I noticed right off the bat is that it has the same exact beam profile as the Peak Logan, which is awesome and kind of suprising as well. Obviously this packs a lot more punch with the 500 lumens than the 100-150 lumens of the Logan, but it's a welcome suprise anyways.
The hi/lo works great, and the low is around the same as the low in a M61N or an Elzetta AVS, so I don't think it's five lumens, more like twenty or thirty. I saw previous iterations ( or runs ) of this light had the issue of the belt clip touching and therefore scraping the tailcap, that is not an issue on mine. The low seems perfectly fine to navigate in the dark and read/inspect things up close, while the high works well outside as a mid-range spotter ( 30-50 yards or so ). The knurling is good and grippy, but I found that you'll need it as well, because for momentary high you need a fairly firm grip and a stout push with your thumb. I've seen someone else somewhere mentioning that the clips come pre-scraped, that was my experience as well, not that it makes any difference, but weird nonetheless.

As expected by SureFire the threads were dry as a sahara, which isn't much of an issue ( I guess? ), because the o-rings were semi-lubed.
I've just put a tiny amount of no-ox on the threads and some haynes on the rings and called it a day, works well. The tint is the usual (?) SureFire green, as seen previously for example on the 6PX. Indoor against a white wall it's pretty horrid, but outside it's actually not at all noticeable ( for my eyes at least ).

What I absolutely did not expect is the wobbly plunger in the tail. I know this is standard SureFire, my old 6P has the same wobbly plunger inside the tail, but man does this make it feel broken. I'm used to the young proud stiff momentary of the Logan and the fact that this one moves about a good milimeter or so under the boot is very disconcerting.

I've seen others testing rechargeables as well, so I thought I'll do my part. I tested the 3V stabilized KP batteries ( Keeppower P1634U1 RCR123A ) and got a result I haven't seen so far. It has low only momentary BUT both constant modes work perfectly. How does that work?
But anyways, this means that even on constant high it's not tripping the 1.5 amps current protection, which is a good sign.
EDIT: Momentary high does work, but you need to push very hard

All in all I'm pretty happy with it, hopefully an EDC1 + EDCL1 combo carry will enable people to have a lightweight but all around solution for everyday. 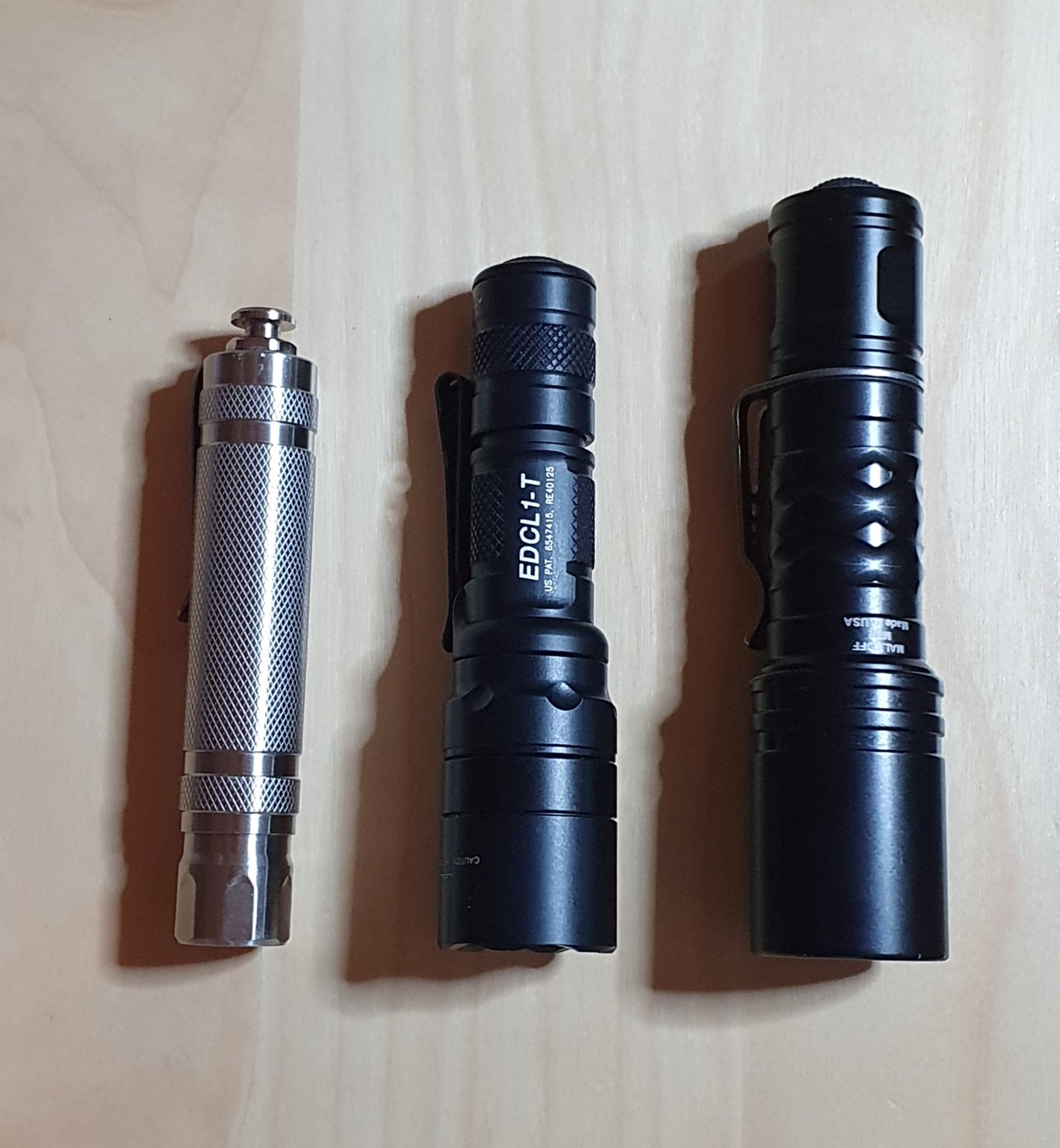 After having and using my edcl1-t for a while as backup to a main light I really, really like it. Gas pedal switch is always a winner, the high is not lacking and the low is just perfect, looks closer to 15 lumens to me than 5. They really did excellent with the beam profile as it has a great balance of throw and spill. Also bonus I can use my E1D head on it instead of the eb1 body since the edc has nice grippy knurling.

The low mode is very green which I can live with but I don’t love it and the switch does take a more deliberate press than the old eb1. This is a double edged sword; it’s harder to press but also doesn’t get easily pressed in while sitting down and you have your light on for the duration of sitting like the eb1 can do when carried in a back pocket. I started using the KP 3v rcr123’s in the edc. They are nice but make the switch harder to press. I’ve done testing with 16340’s and it seems to work fine and ran 8 minutes longer on my runtime test (high mode) than the 3v KP. Today I ordered a couple vapcell 850mah inr 16340’s. With no protection circuit they should have some warning before shutting off and are very close in length to a 123 so the switch is easier to operate, both things I’m after.

I have this light but never use it. I will list it for sale at some point soon.

I bought two of these vapcell 16340’s to try in the edc1 and they performed just like I had hoped. The length is practically the same as a 123, so the switch presses easily. Very good. It ran for 44 minutes full output before tapering off and I shut it off after about 5 more minutes. It was still around 50-60 lumens at that point. Also very good as it will not leave you in total darkness. This seems to be the way to go for the edcl1-t with 123’s as backup. 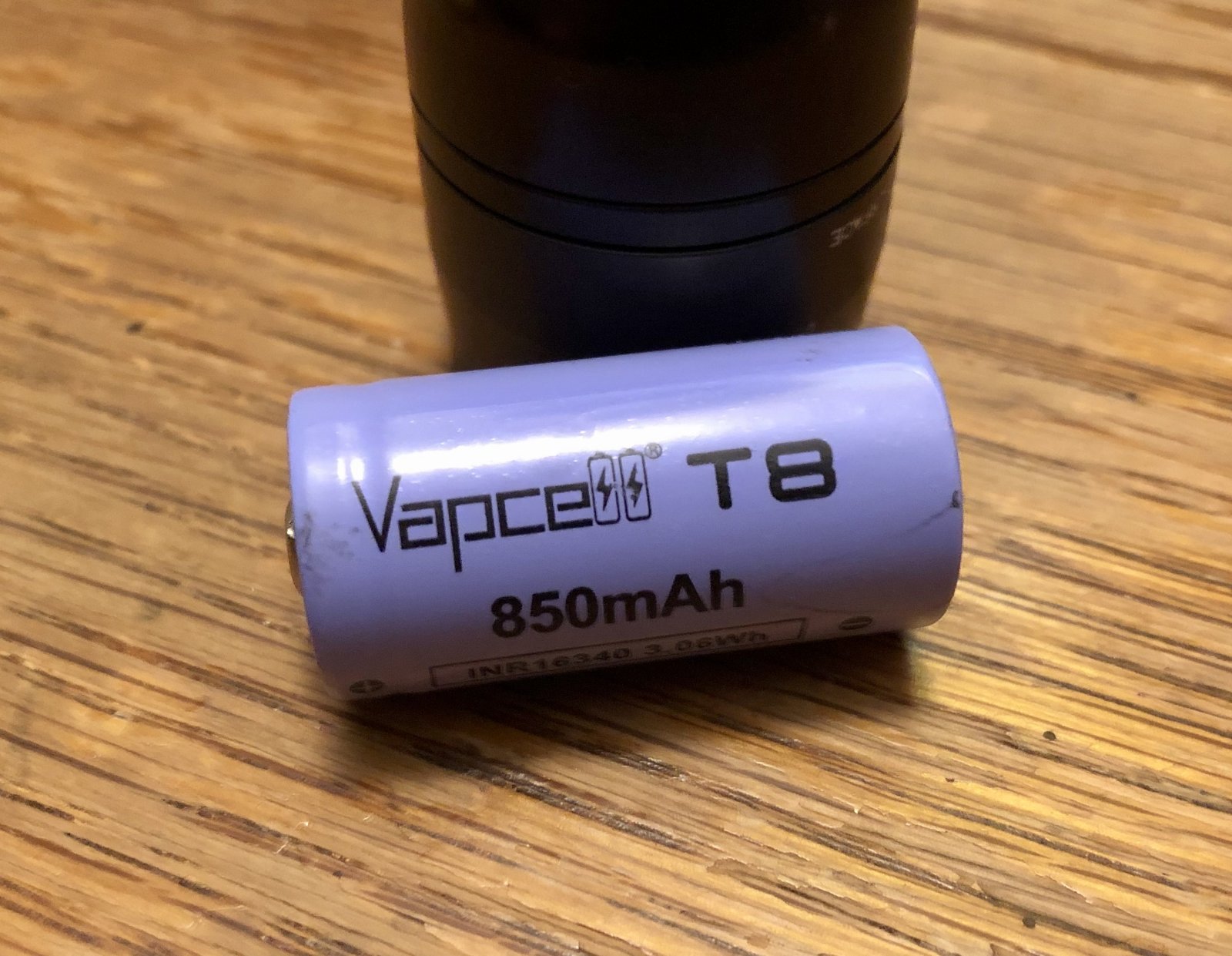 That's what I run in my Tactician and they're great.

boo5ted said:
That's what I run in my Tactician and they're great.
Click to expand...

Really, it’s not too much voltage?

I just did another test with the vapcell in the E1B MV, 37 minutes of full output before it starts flickering and tapering down. The mv is quite battery hungry.

Megalamuffin said:
Really, it’s not too much voltage?
Click to expand...

Over a year and haven't had any issues, the vapcells and two Nitecore 16350s is all I've used.

boo5ted said:
Over a year and haven't had any issues, the vapcells and two Nitecore 16350s is all I've used.
Click to expand...

That’s interesting. What kind of runtime do you get with them?

Usually a couple days before they need a recharge. It's primarily my work EDC.

I made this lanyard setup for the edc1. Works nicely. 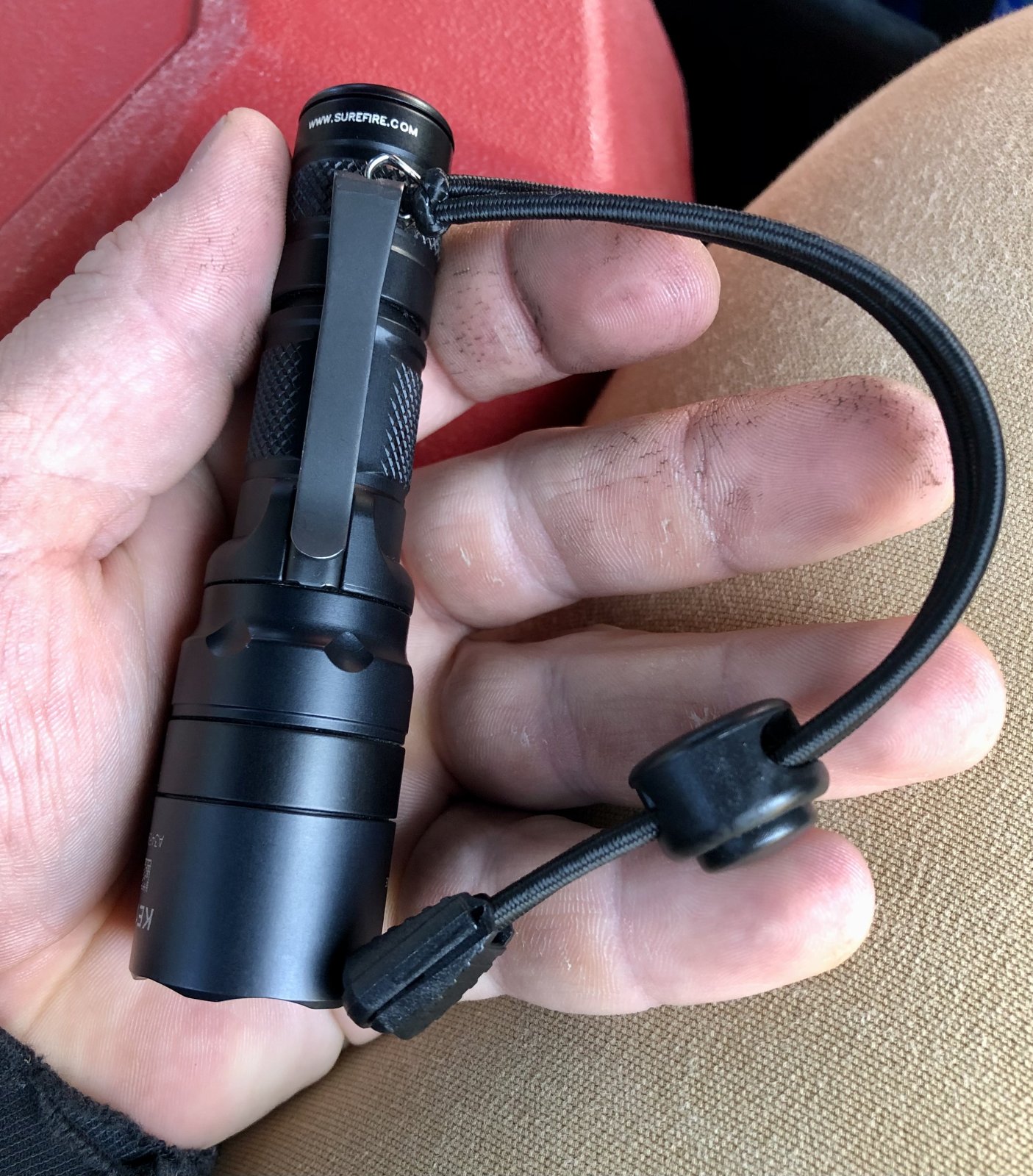 Just picked one of these up because I love the gas pedal tailcap. My main issue was the button isn't as proud as on the L series lights. I realized I could use the retaining ring from a Z61 style tailcap to make it more to my liking. 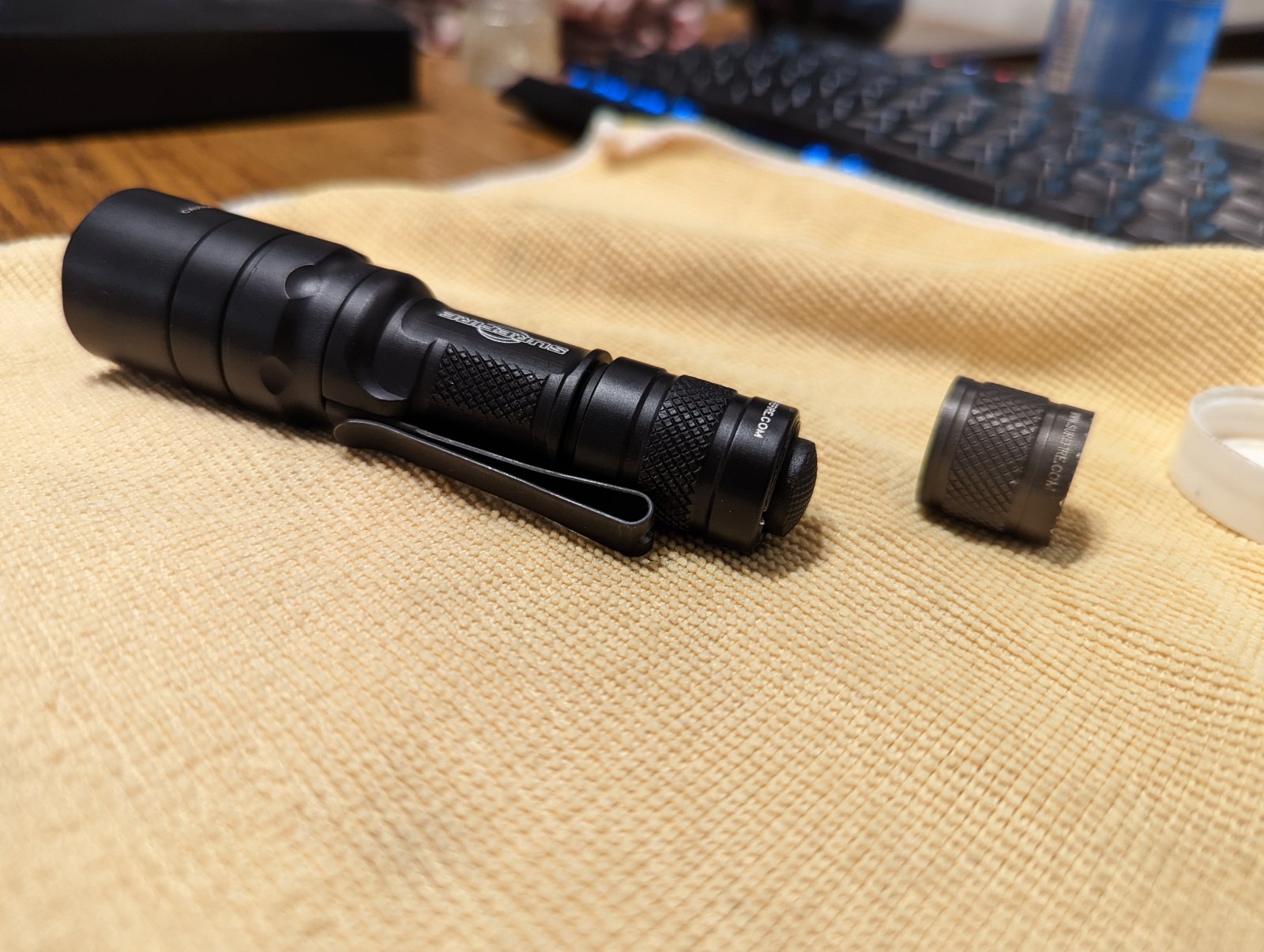 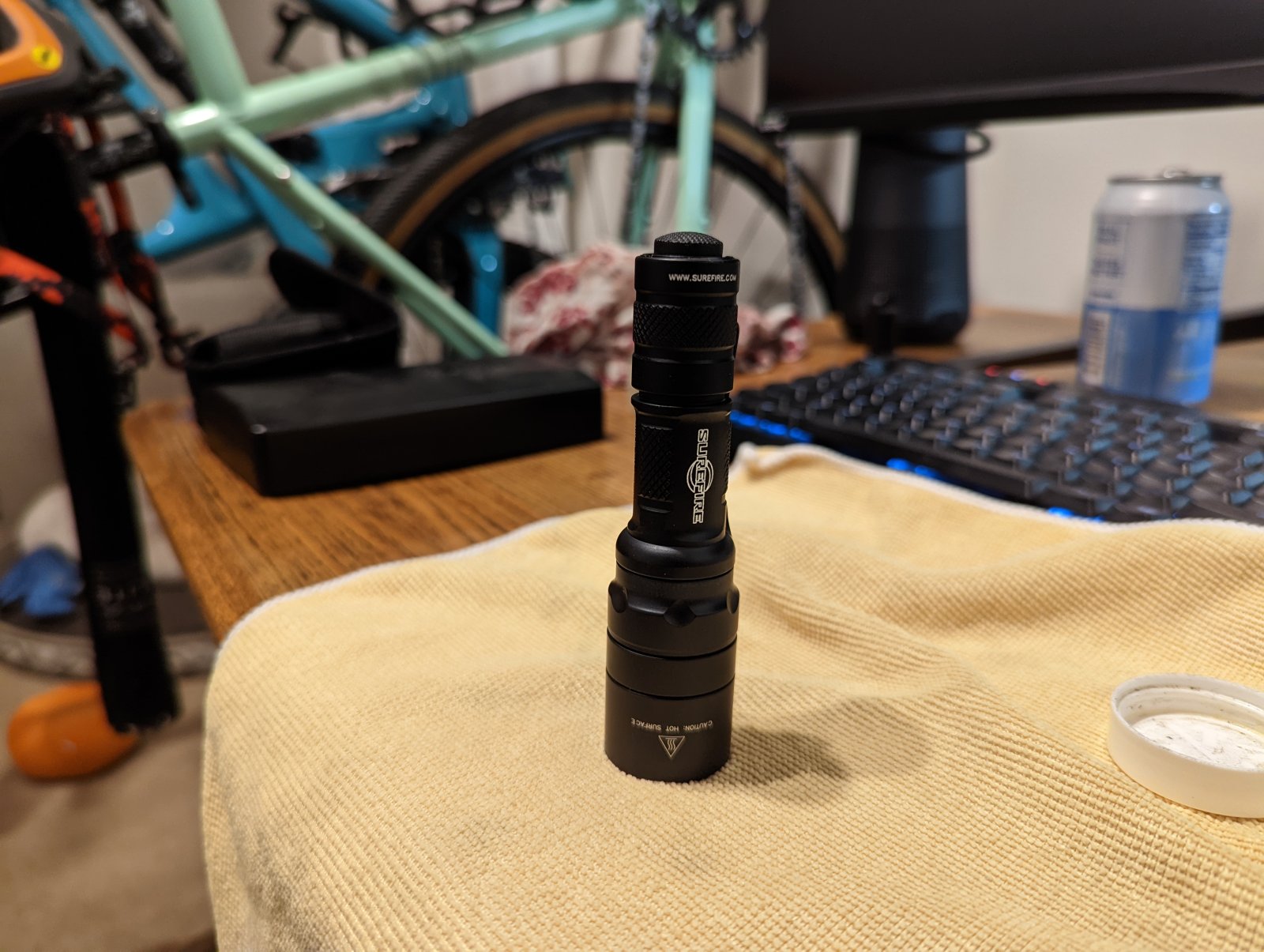 mk2rocco said:
Just picked one of these up because I love the gas pedal tailcap. My main issue was the button isn't as proud as on the L series lights. I realized I could use the retaining ring from a Z61 style tailcap to make it more to my liking.