Like many of you, I think, I have a SF M6 that is one of the most impressive lights I own but it is rarely used because it eats batteries and is *just* an incandescent. Unlike most of you, I took a beautifully formed piece of Art/ functional tool and with recklass abandon took it apart. /ubbthreads/images/graemlins/blush.gif

The reflector in the M6 is not suited for either a Luxeon III or a 5W in my opinion as too much light gets out without being redirected. As a modder, I can only work with parts that are either available or made by myself or others. I have been real pleased with the friendliness and results of the Pelican M6 reflector and upon some checking, determined that I could squeeze three of them into the SF M6 head. 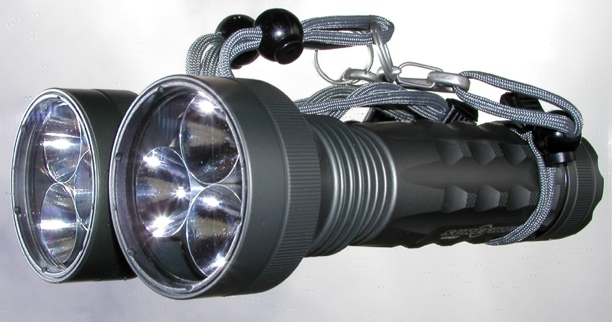 This project was a real challenge in design, geometry and dimensional control for me. Having recently completely trashed a SF KL5, I figured I was on a roll and I could only utterly fail in the worst case. As it turned out, the light did come together and it actually kicks some solid state a$$. /ubbthreads/images/graemlins/grin.gif If one were to consider the bill of materials, my sanity might be questioned but hey, somebody has to do these things, right?

There is some information on the build and components HERE .

Another pic borrowed from the Web Page: 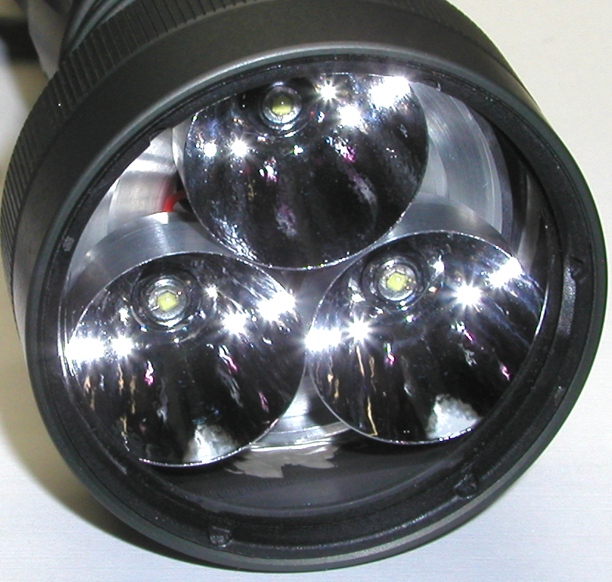 I haven't taken any beam shots and am clueless as to run time. At about a foot away, the parallax shows three partially overlapping beams but by about 3 feet, the beams have merged and remain unified on out to beyond viewing range.

Yeah ... wouldn't it be nice if Surefire sold M6 "seconds" like ARC does?

Very unique light ... is it [eventually] going to the auction block?

Nice, its almost like what i was designing. What is the diameter of those PM6 reflectors? What kind of beam do they put out compared to the Fraen LP or NX05?

Must be a very nice flood Don!! /ubbthreads/images/graemlins/thumbsup.gif Great job!

Don, your work never ceases to amaze me

It does have a nice flood and with 8400 lux, the spot isn't too bad either.

The PM6 reflectors are completely different than the optics. With a 1W or III, they will out throw the optics easily and yet the flood is very useful, IMHO. The reflectors have a stock OD of 1.090 but I turned these down to 1.044"

I had originally intended some clustered Nichia 3 mm's for a switchable low level (three groups of 3). As the clock ticked away on this project, I simplified the plan. I then intended to make a black plastic mask that would seat on the three reflectors behind the first shoulder on them. By the time I got down to the finishing details, I was more concerned with checking out the results than dressing up the looks. /ubbthreads/images/graemlins/grin.gif I could always black out the Pyrex in the null sections but then again, I wouldn't be able to admire my sloppy Arctic Silver application! /ubbthreads/images/graemlins/blush.gif

Those of you with PM6 reflectors and hard driven 1W's or III's need only to imagine the same beam pattern but 3X as bright, throughout, to know what the beam of this looks like.


Doing this to a Surefire M6!

And just when I thought I had seen it all!
Geez! /ubbthreads/images/graemlins/ohgeez.gif
P

So that's why my M6 shivers everytime I mention your name in front of it, for those that don't know I bought my M6 from Don...
B

Hugh would club me over the head for sure if I showed up with this on our coyote hunt.

So I wasted some time taking pics of beam shots. I used the camera on a manual setting (same) and took shots of the KL series as well as a couple PR combos including this light. The image for this light is below: 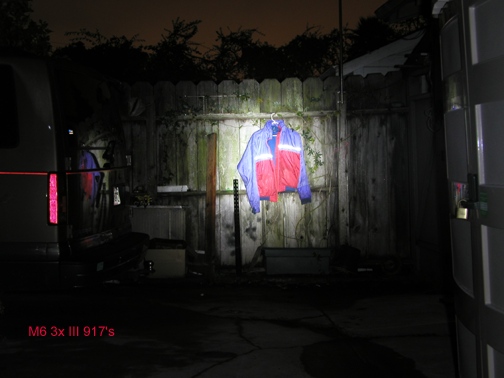 I didn't want to bog you guys down with the others but if you want to see how some other lights compared in the same lame setting, go HERE . The old jacket on the fence is about 25' away. It has reflective stripes as are the red tape stripes on my van in the left of the image. The camera exposure was based on a level to capture the densities of the spot beam so in many cases the flood portion of the beam is not evident. To the naked eye, the flood of all of the lights was more than ample to illuminate the ground between the fence and camera.

YC,
Your M6 was spared but the one I bought from Ray didn't fair so well. /ubbthreads/images/graemlins/icon15.gif

[ QUOTE ]
yclo said:
So that's why my M6 shivers everytime I mention your name in front of it, for those that don't know I bought my M6 from Don...

don't you mean you rescued it from don? /ubbthreads/images/graemlins/eek.gif