evan9162, I missed the point that all light source are directed to the same destination, thus more lumen on the same spot ...

Thanks for pointing out our mistake

I added some close beam shots (a good friend asked for them so what the heck): 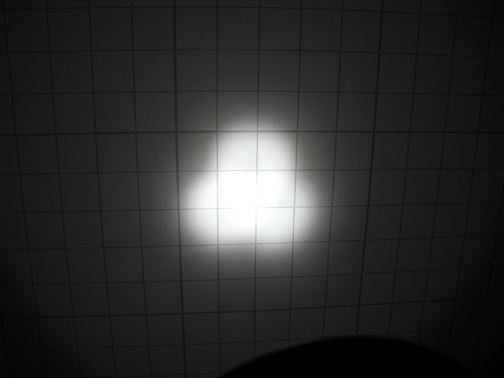 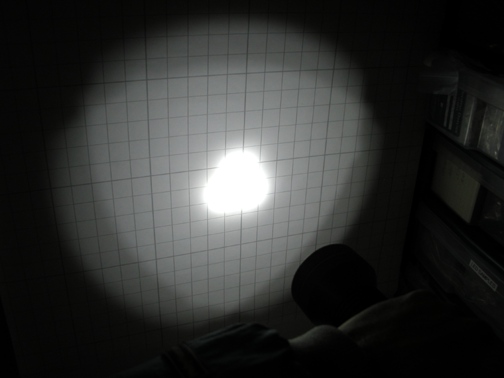 And finally at about 2 feet: 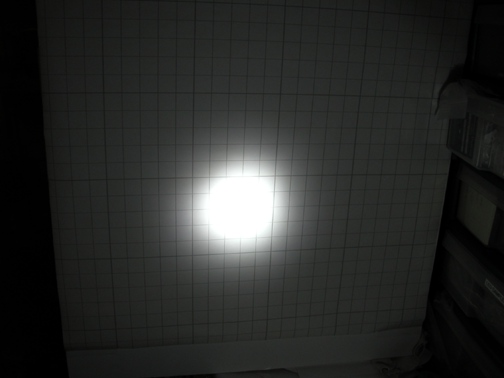 I think you can see that the three beams overlap and continue on as a single beam at a very close distance. The parallax of only about 1" has no bearing on any real use of the light. It is about 3 times as bright as a single III driven at 917 mA. This is the brightest and still reasonably useful beam LED light I have. I do have another with higher a higher Lux reading but it is strictly a pencil beam.

The PK1 was mentioned and I must state that it would most likely kick this lights butt! /ubbthreads/images/graemlins/grin.gif The 5W X bin in it probably puts out more lumens and the 4" reflector manages the photons well!! Certainly the PK1 has a higher lux reading than this light. This light might have more reach, slightly off axis and still in the combined beams section, than the PK1 would. The PK1 is a wonderful blend of light and use of the Side Emitter. It is the reigning king!

what a cool beam! /ubbthreads/images/graemlins/grin.gif

That 2nd beam shot is a wankel engine! /ubbthreads/images/graemlins/smile.gif

The side spill forms a similar beam pattern to the rotary wankel engine.

Cool up close beamshots.
A

I actually had a few ides with this mod but not knowing how or if it would turn out, I kept it simple. I had considered an alternate switch for 1, 2 and 3 on as well as clustered Nichias. I even considered one red and two white as a two circuit program. I didn't consider mixing the 5W with the III's but after seeing the results, I think that's a good idea you have there! The resultant beam would have been more like the PK1 as I recall it. The M6 pak could certainly handle the demand of a 5 and the two III's. Almost makes me want to make another. There might be some thermal issues though.
A

Thermal issue... How about a bezel with built-in space for ice packs?
S

it should be
"Dear Surefire development department..."

I decided to resurect this thread instead of a new one. I just wanted to comment that last night, I modified the tail switch on this light and now have a two stage with a "low" as well as the high. It works great! (same function as the A2/L1 switch) /ubbthreads/images/graemlins/thumbsup.gif

The mod consists of one of my prototype two stage assemblies embedded in the stock tail switch components. When I get the production parts, I will post images of the switch assembly as well as a couple mods I have done that can extend the range of use. I realize that this post is premature and probably not very nice but I couldn't help myself! /ubbthreads/images/graemlins/tongue.gif

** The lux reading is not 3X the typical 917 PR output and more like 2X what you would expect. This is due to the paralax and the fact that at one meter, the beam spot of this light is larger than a single PR. However at distance, the beam stays coherent and would likely measure 3X the output of a single PR-917.

Wish I had a crap load of money,,, I would offer it all to you for that mod. lol

Don, is the full output the same with the new two-stage tailcap as it was with a stock one stage? Thanks

Don, was this the same light you had at the SHOT show? If so, I can honestly say it was one of the coolest lights I got to see. Kudos also on your courage to willingly risk the damage on a SF M6.

Same light but now I don't feel so bad about using it more. I won't be eating batteries as much. /ubbthreads/images/graemlins/blush.gif

I did add the crenelated bezel to it so I would know when it was on, even if it was face down. /ubbthreads/images/graemlins/icon15.gif and I took it swimming when I visited your fine state!

Sorry to go off-topic, but you make a fine choice in going to Maui. It's such a beautiful island as I'm sure know. It may be the most scenic of the ones I've seen (even though I live here I haven't visited them all). One day I was at Wailea in the afternoon and it's like you died and went to heaven.