We had a power outage the other night. Yes we engaged the flashlights and lanterns, however this story isn't about the lights.

I have a UPS that's plugged into the wall and a surge-protected power strip was plugged into one of it's outputs and feeds my computer and monitor. It's taken many brief power hits with no issues, but this time was different.

The power was out for several hours. I shut down the computer and monitor to save UPS power for things like keeping cell phones charged. Looking at the UPS, everything seemed normal and I had a lot of battery run time left so I walked out of the room for awhile. The UPS was doing it's normal short beep every 30 seconds or so, indicating that commercial power was out.

I was out of the room for maybe 20 minutes when I heard a solid steady beep from the UPS. Hmm, I wondered what's up. When I walked back into the room I smelled smoke and that burning electrical smell, so I shut everything down, unplugged everything from everything else and sat the UPS on top of a steel typing table to give it some air so it could cool down. It felt very warm on the bottom where the battery tray is located. I'd assumed that the UPS was fried.

The next morning I wanted to get my computer fired up again so I planned to plug the surge protected power strip directly into the wall, bypassing the UPS. When I plugged it in I heard a loud FMMMMMMP! and the burning smell filled the room again.

I unplugged the strip and opened it up to see what was going on. I quickly discovered that the strip had fried, not the UPS. Specifically one of the MOVs in the strip failed in crowbar mode, dead-shorting the AC line. That particular MOV had burned to a crisp while neighboring components remained intact.

I'd been using this strip for a couple of years with no problems. but this was the first time that it was being fed by UPS power for an extended period of time. Hmmm... :thinking:

Here's what I think happened. The UPS puts out a stepped-sinewave when it's generating power locally. The steps contain square waves which contain lots of spikey harmonics in them. I suspect that the MOV was trying to absorb these spiky harmonics until it finally failed-shorted, which is what MOVs generally do. I'm surprised that it didn't blow the breaker in the strip or the one in the UPS.

I've since purchased a much better name-brand strip but I'm not going to hang it off the output of the UPS - not yet anyway until I confirm my suspicions with my 'scope. Consider this if you're running a UPS that's anything other than pure sine wave output.
B

Contemporary UL-listed surge protector strips incorporate a fuse or circuit breaker that should blow or trip when an MOV shorts. You might be better off using a strip at the output of a UPS that does not attempt to provide surge protection; they do exist, but well-built ones may be difficult to find.

The late Canadian audio engineer Neil Muncy, a teacher of mine early in my career and later one of my consultants, wrote and lectured extensively about noise in audio systems. He was a valuable source of information on systems design and a critic of MOV-based surge protectors. Many of his writings are readily available on the 'net.

Thank you for the input B-E. Yes that power strip did have a breaker in it but it didn't blow when the MOV shorted. That seems like a fire hazard. It was a no-name strip so I will only be using brand-name products from now on.

I'm consideringusing a plain vanilla strip at my UPS output. I saw one at a store the other day that is all metal and should do the job. After that event I'm interested in a strip that has few or no flammable components!

I didn't realize that MOVs were that leaky when operating below their threshold voltage. I can see how this could cause noise in audio (and probably video) systems. I can't say that I've heard of Neil Muncy but I will look him up. It sounds like he had a lot of good advice.

Yup. I knew what was wrong after the 2nd paragraph.

You want the cheapest outlet strip you can find, preferably NON surge rated so no filtering. Or go to home depot and get some of those bright orange plug splitters.

Or new UPS w/ more outlets. Most of the good ones have 8 on them now.

I've just checked the output of my UPS with a 'scope and confirmed my suspicions. Commercial power is a nice clean sine wave but UPS battery power is a hideous square wave with loads of harmonics. If I can get my flickr account sorted out I'll post screenshots.

UPS output while on commercial power. A nice clean sinewave as one would expect from the power company. A negligible amount of harmonic distortion visible at the slightly flattened peaks. 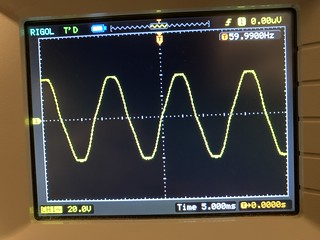 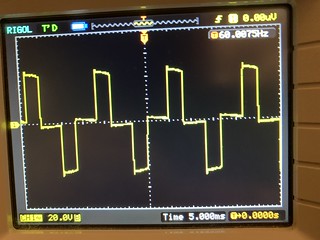 Is that waveform compressed on the y axis a little? Wave looks a little triangular to me and the peaks look clipped a tiny bit.

turbodog said:
Is that waveform compressed on the y axis a little? Wave looks a little triangular to me and the peaks look clipped a tiny bit.
Click to expand...

B
what UPS or surge protector should i get ?