Tad Customs is out of business since ~2 years. If I remember correctly the begin of the end was when Covid was starting.

Some time ago there was once in a while stuff available at ebay. Don't know if this is still the case...?

I asked him about something a couple months ago. He has no stock left and is done in the business unfortunately

Dang, now it’ll be tough trying to find one.
V

Yeah. I’ve had a WTB for an A2 adaptor for a month or so now and no hits. His bulbs are truly fantastic too it’s a shame we don’t have those available at least

So the tads bulbs are specifically fit for the socket? Are other bulbs useable?
V

The ones that I have, are the same size as maglite‘s bi-pin and bulbs. But with a little thinner of a base. So the filament will sit a little bit lower in the reflector. Whether that matters for your particular light or not I’m not sure. The bulbs are just well-made. I also have some of his PR 13.5 base bulbs which are also excellent. I have one of them in a maglite. With a smooth metal reflector. It’s a beast. They were rated for 60 hours. I would say they are driven at spec. About the same CCT as an 82 aviator. And I haven’t had one burn out yet
V

Then it’s worth trying to hunt down. Thanks for the info vicv.
V

No problem. I have some of his 7212 bypen bulbs I use in a maglite ML25 IT. And two 18500s or three times CR123 cells. Because of the filament issue I had to raise the bulb a bit in socket and I used hot glue to lock it into place. It's a very tight beam. I mostly use this light for quick bursts of illumination as I'm worried I will melt the plastic reflector. So it gets a lot of startup amps. I'm still on my first one and figuring must have 10 hours on it. There is no darkening and it is just as good as it was when new. So yeah I would say they are worth hunting down. I just don't know where you get any. Maybe do a WTB
here

vicv said:
So strion and Stinger bulb should work in one of the sockets as well
Click to expand...

Streamlight lamps can still be had, but I hesitate spending $10 plus ship on a lamp that "should" work. If they were as inexpensive as Tad's lamps, it wouldn't be an issue. But I am living month to month, and $10 lost will burn me. This is something that really needs verified, and with images posted so everyone can see, which would lead to more members experimenting, and more data. If it fits in the socket and the base isn't too tall, I'm sure with trial and error we can make it focus, and then know, then let everyone know.

Any CPF members out there running Streamlight incans that also have a T. customs E socket? (I've always wanted to get a Stinger, but I never got to it before my budget shrank to nothing.
Last edited: May 25, 2022

The Maglite site has bi-pins up to 6 cell for $8. It's a PR to bi-pin conversion kit. They have the same spread as the TL3 bulb. I used a TL bulb in a 3 cell ML25 with 2x18650 batteries versus the 5 cell Mag because it produced a better beam.

Same spread as the Tads bulbs too. Tads had a better beam but all I had was for the 6 volts of an A2 with 2 CR123's fueling it. I tried an A2 voltage Tads bulb in a 2 cell ML25 powered by LifePo4 18500's but stuck with a 4 cell Maglite because I only had one Tads and wanted to keep that in the A2. I forget Tads model numbers.

Thanks bykfixer. Can I just link to a bulb search there?
Maglite site Bulb search
I wish I knew the Mag terminology, TL? TL3? PR? The way you talk is so jazzy, bykfixer. With the way you write, you might consider performing spoken word up in the fan, slip or bottom. 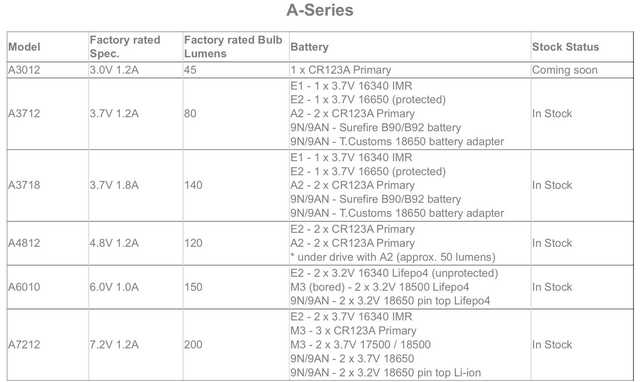 PR is the flanged bulb a Maglite came with long ago and the conversion kit is a plug that fits in the hole that the PR (meaning "pre-focused") used to and has two holes to plug a bi-pin bulb in.

I suppose I have a 3712. The 80 lumen one because I do remember I was shooting for as close to factory as I could.

I am not covered in art nor does my face look like I head butted my dads open fishing tackle box so I'd probably not be welcome at the Fan, the Bottom or the Slip. I did chat with Elvis Costello at the Alley Katz during the Emmett Swimming show in the late 90's.

Thank you for the Mag primer, bykfixer. That all makes sense,

A3712 is nothing like MN01, different voltages and amps, but maybe it is closer to MN03 (which A4812 is closest to). And there was a problem with the A3012, which would have been close to MN01 (but brighter with less runtime, MN01, I think is 0.7A), but never Tad released because it would not focus. But Tad sent me a sample A3012, and I couldn't find a problem with it, ran it with two Eneloops for 2 months until it accidentally got put in the wrong head, got too much voltage and

I got a Superchunk bootleg from Alley Katz in 2003; they had me running lights, and the next thing I know I'm dancing in front of the stage. But I'll never forget early 90's Flood Zone every Wednesday for $5... was an incredible bargain for weekly Dave Matthews Band shows before their music contract. I would have gone to see Elvis had I heard about it. Pretty amazing talent.
You must log in or register to reply here.
Share:
Facebook Twitter Reddit Pinterest Tumblr WhatsApp Email Share Link