Awesome!!! wow what a great collection

Great perspective and amazing collection. Thanks for sharing
M

Mag Magcharger. This is probably the best flashlight Mag ever made, and it's still my favorite police rechargeable. Came out around 1982 to do battle with Streamlight's SL-20. It's a beautifully engineered light, and incredibly durable:

Now a few of the new lights.

Bianchi Super B-Lite 2D. This was Bianchi's final flashlight design, from right before they left the market around 1984. Shows some Streamlight influence, but a little more compact:

Super B-Lite 4D. Funny story: A surplus company was selling these things at discounted prices a few years ago. I mentioned to a fellow collector I was planning on buying one, then mysteriously the next day their entire inventory had been bought by someone with his initials.

Spec-Lite 6D. The Super B-Lite designs from when Bianchi bailed out were bought by an outfitting company and produced as Spec-Lites in the 1980s:

One of the switch end:


Those Grendelite a2, do you you kow if they were also made in a olive color and plastic case. I lost my old one and it looked exactly like these. Same belt clip, 8 AA, switch looks identical, only one ouput. The lens and bezel looks the same. Twist off lens and insert batteries. Body was ribbed or fluted.

I had carried mine with a maglite krypton bulb, was very bright for the time.

You can upgrade MagCharger with a Malkoff drop in. Just mentioning, as I have 2 of them, and like them.


Those Grendelite a2, do you you kow if they were also made in a olive color and plastic case. I lost my old one and it looked exactly like these. Same belt clip, 8 AA, switch looks identical, only one ouput. The lens and bezel looks the same. Twist off lens and insert batteries. Body was ribbed or fluted.

I had carried mine with a maglite krypton bulb, was very bright for the time.
Click to expand...

I don't know much about them. They were available in more than one style, since I've seen photos of one that had a yellow (possibly plastic) body.
M

I finally pulled out my only two police lights:
.

Latest addition to the collection. It's not a police light and not exactly a Kel-Lite, but it's interesting. At some point in the late 90s or early 00s, Don Keller arranged for GT Price to be bought out and renamed Kel-Lite. This didn't last long and they soon became Nordic Light and then went out of business as far as I know. This light is one of GT Price's AA pilot's lights, but from the Kel-Lite rebranding period. It's the size of a Mini Maglite, with a pushbutton switch and a red filter that pulls over the bulb. 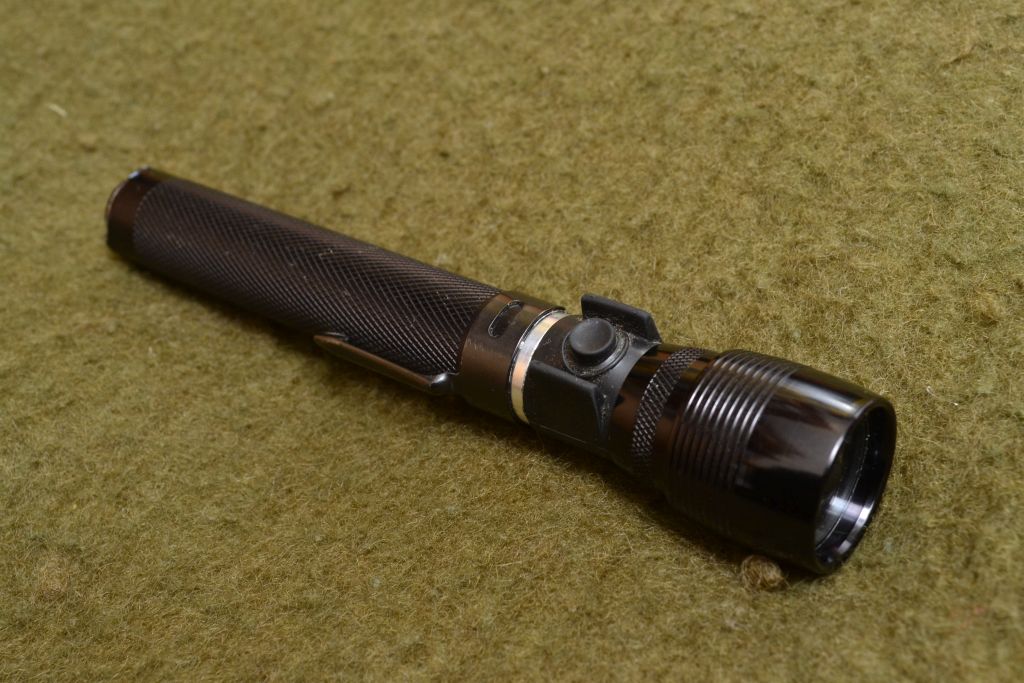 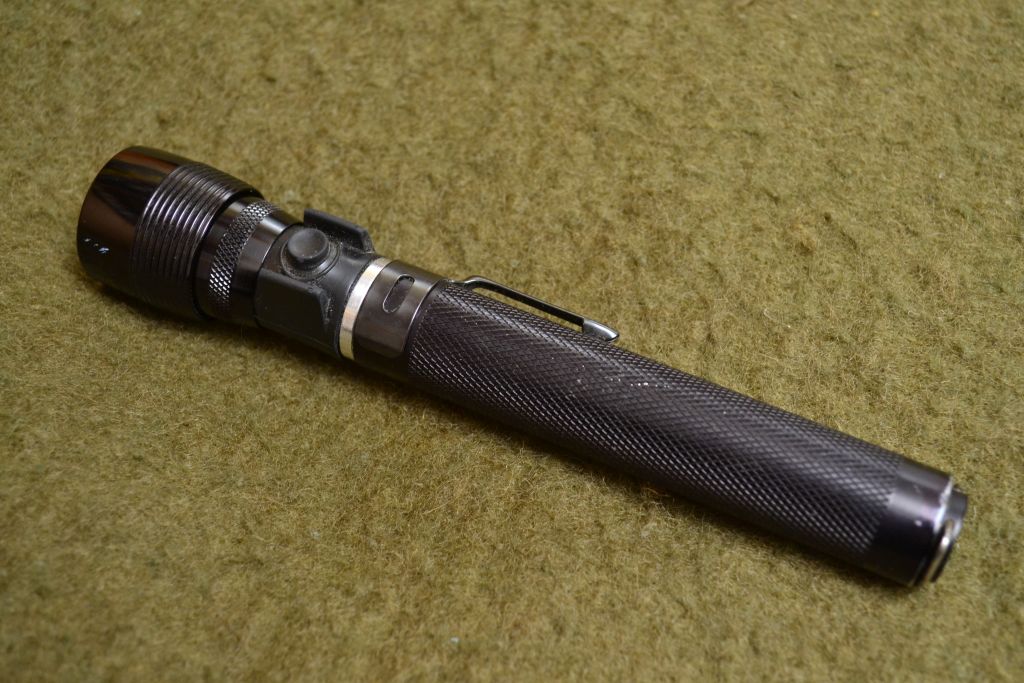 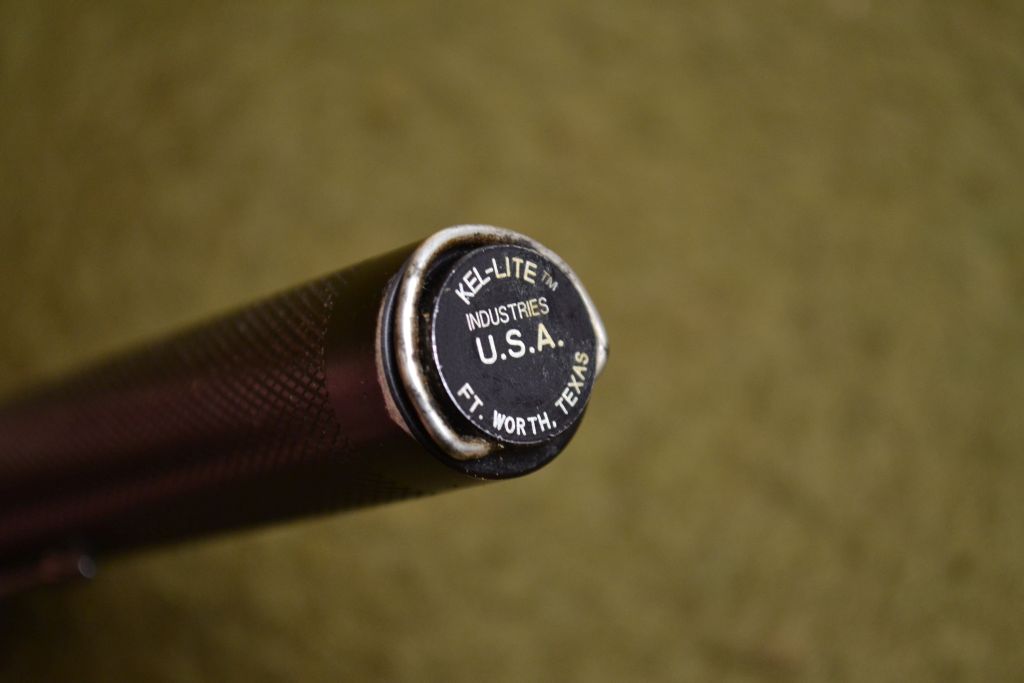 Still have it. Put an lED in it, and it serves as an emergency light
Click to expand...

You have an exploding flashlight? Wonder how many lumens it puts out. Pretty short battery life though...

But seriously -- what kinds of bulbs do these use? How bright did they get?

Dusting off this jewel of a thread to say I found a Pro-Light in great shape recently. Scheduled to arrive Thursday.

Don Keller may have been the most influential flashlight designer since CF Burgess created reliable dry cells and Conrad Hubert passed out Evereadys to local policemen way back in the 1910's.

Thank you for doing this abtomat. Many- a hole in historical documentation was filled in by this epic thread.
M

Congrats on a great find.

Nice to see some action on this thread.

My collection of 'cop lights' is pretty thorough from the real early days to the early 60's then it jumps over the 70's and 80's (to the early 90's) largely due to lack of knowledge.

After reading this all I can say is "Hey Captains... you and the Maglites are gonna have company.
M

HAHAHA! How did I know that you would probably get this! I should have bid when I saw it....LOL!!! I LOVE IT!

Until I get a proper 6 volt charger cord for it 3D cells will light it up. It arrived without the cord. And after ?? years between charges it did light briefly, then faded to nill.

It's rumored the SL20 battery works.

The still working stock bulb was replaced with a PR6.

The stock (Holland made Norelco) bulb was placed in the tail section and a Tung Sol went in.
Saving the stock bulb was part of the reason, but those Tung Sol are so darn nice. Nary a filament shadow to be seen.