How important are the amount of lumens to you? As I mentioned before, my always with me light is an AA 119V Haiku which likely "only" puts out around 60 lumens (out the front) on high? I find this more than adequate for the majority of the time.
The efficiency bin of the 119V is B10 from memory and is rated for about 250 lumens at 1A. What comes out the front is likely much less. Don actually lists what he measured in various posts somewhere.
While I have various lights, some of which are high powered, I often find that the distribution and quality of light is as, or more important than the intensity. Of course, that all depends.
Tint wise I find the 119V to be very pleasing, and the CRI is also very good. I think it's still very competitive and even better than many current alternatives.
In my experience the output between the, also discontinued, sw45k (D220 efficiency bin) and 119V to be moderate at best despite the higher rating on paper. The sw45k has superior colour rendering, but it's also a bit cooler and pink to the eye. Another point regarding the two is that the sw45k (219B) is more fussy about reflectors, and can create a fried egg or monster eye effect if the reflector doesn't smooth it out right (the XR reflector does a beautiful job, the old XP with heavier texture also works, while the current XP reflector creates the unwanted effect).
The 119V, while not the most powerful or efficient, are an excellent LED and more than make up for it by quality of light. A definite favourite of mine.

I can also recommend Don's XPG2, it has a nice tint and reasonable CRI but a higher output (noticeable) than the 119V.
While I haven't tried it behind the XR reflector, I believe it would behave similarly to the 119V by providing a more gradual distribution of light- more floody.
The XPL HI (4200K version) may also be of interest?
In summary, regarding Don's options, the 119V is the least efficient but highest CRI and arguably best tint.
Last edited: Sep 27, 2021

You have been most helpful. I prefer warm to neutral tint (4000k to 4500k). I did not see tint listed for the 119V or the XM-L2. Would you say they are warm to neutral? And what is important is having a really low moonlight mode for middle of the night getting out of bed.

You're welcome.
The 119V is ~4500K and appears quite neutral to slightly warm. It's all relevant and subjective but I'd say that's a reasonable assessment. Like I said, I really like the tint, colour temp and rendering of the 119V.
The XML2 is cool white (~6500K?), and of much lower CRI (big difference in my opinion).
I gave up on moonlight modes years ago, although I once considered them essential. Most of the time, when you'd consider using a super low mode, your unaided eye will likely suffice- particularly outside where, unless you're huddled over something or in a tent, moonlight levels aren't very useful.
A few to a handful of lumens is generally a useful low for me. Anyway, I'm no longer a user of moonlight modes when it comes to fractions of a lumen.
That said, the Hive is highly programmable and will provide super lows with some caveats.
Regarding the moonlight thing, as always the beam is of relevance. A broad, diffuse beam can get away with carrying more lumens and still appear moonlight like.
The high CRI Sapphire 5700K makes a good moonlight light? I think so.
Last edited: Sep 28, 2021

I just noticed I got some "likes" from the man himself. I feel a bit special now 😀
Cheers Don.

Thanks for that information. You've helped narrow it down to the XPG2 and the 119V. I have a light with the XLP-Hi so I would like something different. I haven't seen mention of the tint on the XPG2, do you know if that is neutral to warm? The XML-2 is out for me, 6500k is to cool for my preferences. I had originally kind of ruled out the 119V as I have read that the die size of the LED affects whether the beam is more or less floody. I thought I had read the die size on the nichia's were small. However, I think what you're saying is that the XR reflector helps to disperse the beam and increase the flood effect. Now that you mention it some of my wide lens TIR optics do appear as less lumens than a narrow TIR optic so that does make a lot of sense to me. Thanks again. I'm getting closer, but I guess I have time as Don is out of the HIVE until 11/01. I've decided on the 1x123 body.

Happy to help, I enjoy talking about McGizmo lights.
The XPG2 is also ~4500K, although it has a different tint to the 119V (even though they are roughly the same colour temp.). I find the tint to be quite nice and the CRI reasonable. The die/dome on the XPG2 also play very nicely behind the XP reflector (bit smoother in the spill than 119V) so it should be great with the XR reflector.
You understand correctly about small LED dies being more inclined to throw, due to a higher surface brightness- more lumens per area. The main factor is the optic in front, or in the case of something like the Mule, no optic at all for pure flood.
So, yes regarding the XR reflector dispersing the light more for a more floody beam.
The 119V does have a small die (the specs are in a detailed post by Don, somewhere) and it's dome is also noticeably smaller than the XPG2 when both seated behind an XP reflector and compared (it wouldn't be much on paper).
A few observations when comparing 119V to XPG2 (with XP reflector, keeping in mind that you're after the XR with obvious differences). The output from the XPG is noticeably higher and it can throw a little further with a slightly larger hotspot- this is a function of power rather than smaller die, of which I believe it has slightly larger, the CRI is noticeably lower by comparison but still good- this may matter if you're studying something (up close etc) or just want that general high CRI goodness. I find it matters much less when outside, where ~80 CRI is more than enough for me with a good tint.
While tint is subjective and also relevant to how and where you're using a light, I'd give the edge to the 119V. That said, the XPG2 has a nice tint.
While both of the LEDs are considered somewhat vintage now, I believe they are still more than relevant and particularly good.
I hope you get the light you want and get a heap of utility and joy from it.
After many years, and many lights, I've learnt a lot and have a great appreciation for Don's lights.
Well, hopefully that's all clear as mud.
The 1x123 pak is my favourite form factor by the way, but I do enjoy the various utility of the others- like the AA pak I carry everyday. Hey, they're all great.
I really do need to get a 2x123 one day, better keep saving.

I've never actually measured them, but I'd say quite good. Things to consider; I have 119V mounted on 3S (650mA max) and AA converters (300mA max) and use paks including AA, 2AA and 1x123.
When using the 1x123 pak I happily use CR123 primary, 16340 3.2V and 16340 3.7V. This is a real bonus (among others) of McGizmo LEs in my opinion compared to standard drivers that are locked to one or two of these options at best.
I don't currently have a Hive but it is programmable up to 1.2A, when I did have mine I set it closer to the max of the 3S. The Hive also allows for various battery chemistry low voltage behaviour.
I'd say that if you are used to 123/16340 lights, then you'll find it more than acceptable. Obviously usage patterns and output in conjunction with battery source will dictate terms.

Have you tried the XPL HI with the XR reflector?

bluemantra said:
Have you tried the XPL HI with the XR reflector?
Click to expand...

I tried it and it worked out pretty well. At one time it was interesting to me when I put LE with XPL HI in place of LE with XM-L2. I compared next to Novatac and discolored so as not to be distracted by the strange color perception of the camera. About 1.2-1.3 meters from the wall. 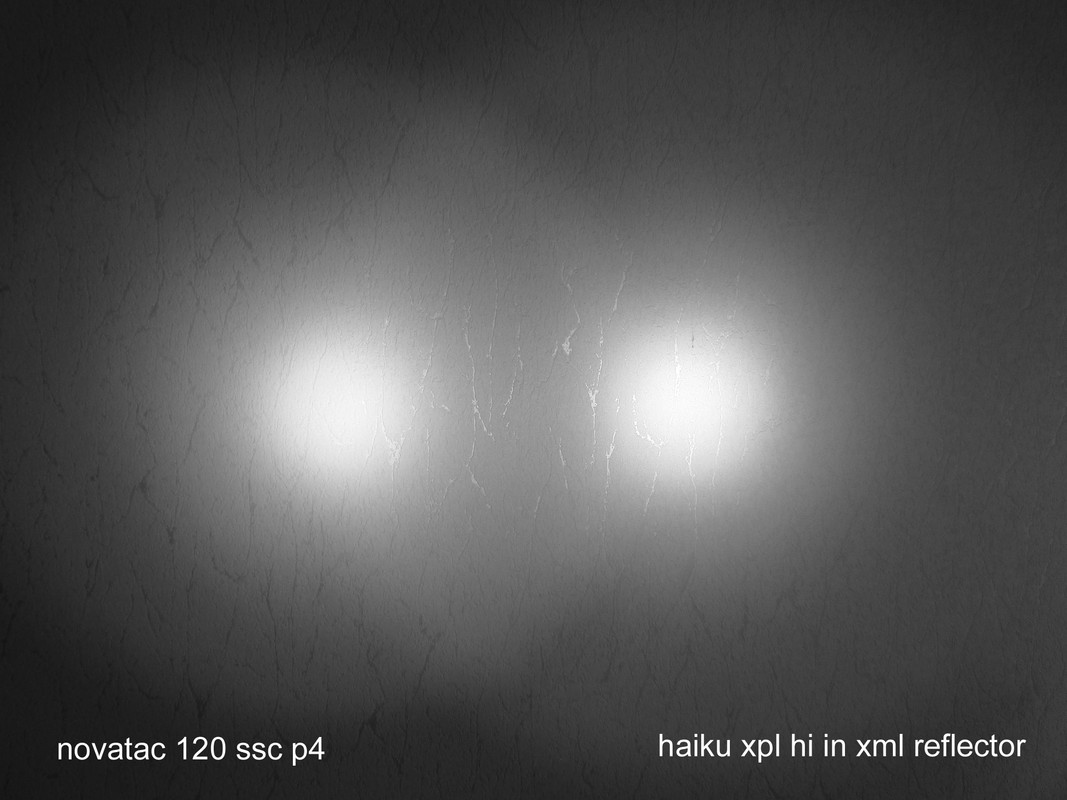 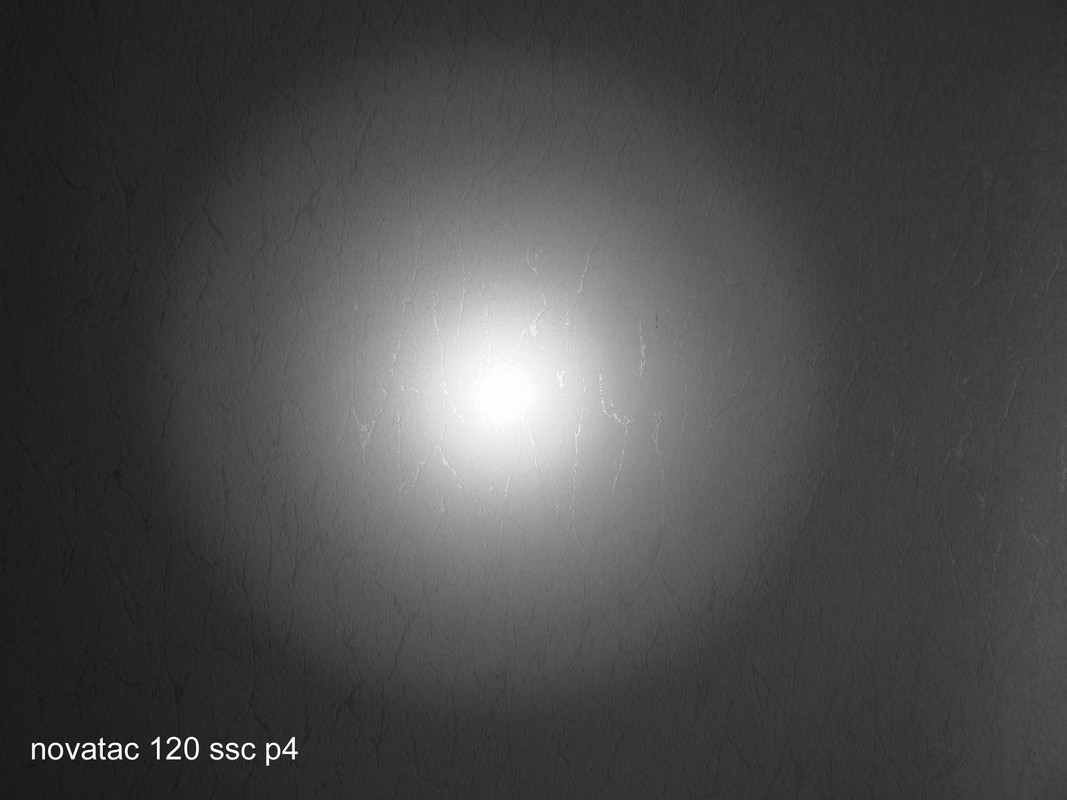 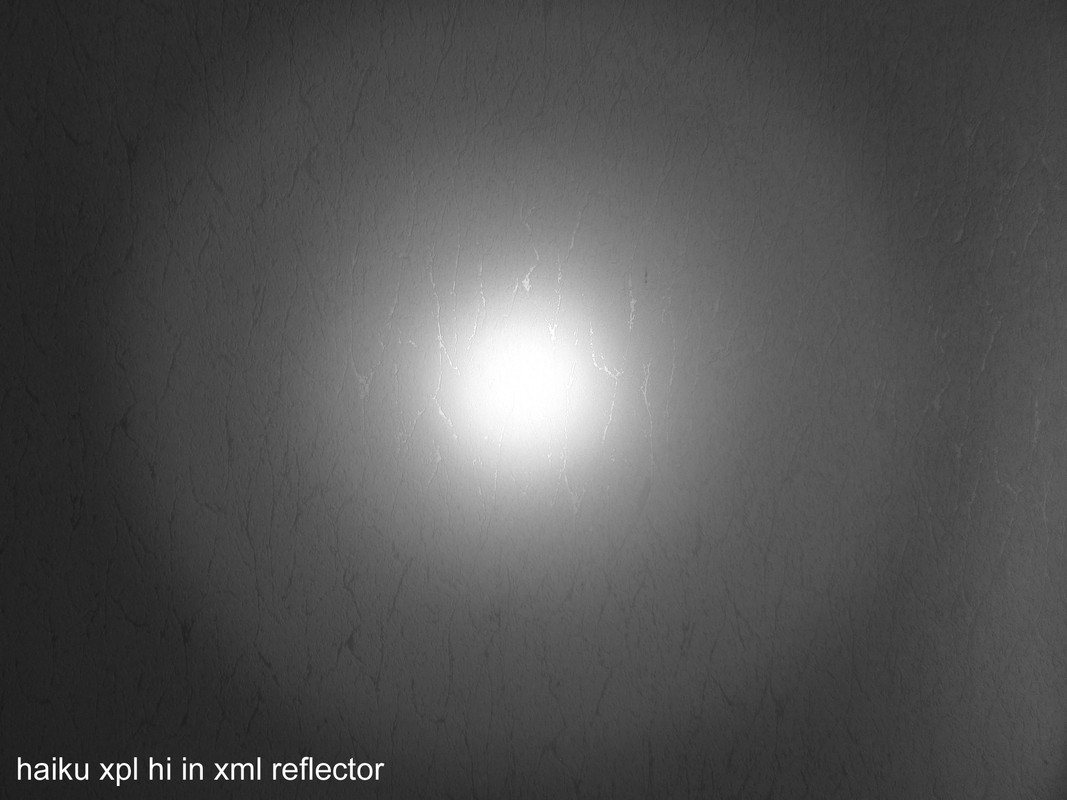 It's the only option with that pak since the 3S (second hand might be an option) was discontinued. You could also get something after market, although you'll likely be restricted voltage/battery wise.

Okay then looks like I've got some waiting to do. Is that battery pack the same for the Haiku and the Sundrop? Just different heads?

Thanks Don. I'll be placing an order as soon as I see you have the HIVE converters back in stock!

And thank you for all the help F89. I've decided on the 119v with the XR reflector (For greater flood) is that how I should order?

I wonder how many, if any, have ordered that particular combination?
It's a great combination and creates a really nice beam.
Last edited: Oct 9, 2021
D

After many years of trying different flashlights and figuring out what I like and don't like, I'm considering pulling the trigger on a Haiku. I've read through many of the threads here and tried to absorb as much as I can, but I want to make sure I have my info straight so that I order the right configuration for me.

What I'm looking for is basically a general purpose indoor light with an emphasis on a smooth beam with minimal tint shift (I really, really dislike when the spill is a different tint than the spot) and bright spill. I don't find a tight hotspot and dim spill to be very useful in a pocket flashlight that's mostly used indoors. I like 4000k and, of course, the higher the CRI the better.

119V with XR reflector? The discussion just above seems to point in this direction...

Also curious about aftermarket LE's. If I buy, say, a Tana SuperLE with a 219C (basically for more output), would that give a nice smooth beam without rings or tint shift paired with the XR reflector?

Here is a 219C with XR reflector. One close on wall and one from ab 10 feet. Hope this helps. 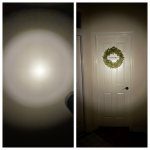 PoliceScannerMan said:
Here is a 219C with XR reflector. One close on wall and one from ab 10 feet. Hope this helps.
View attachment 18441
Click to expand...

Rechargeables in the Haiku

Trial by fire: Haiku from the ashes
2 3

Do the boots that DarkSucks sell work with the Haiku?

C
An evening walk with the Haiku XP-G
2