Any X-Files fans here?
I've seen only the 1st episode. Love to hear what you guys think about the reboot so far. Below is my reaction.

The first episode left me slightly intrigued, just ever so slightly. The more I think about it, the more I feel it was a bit too quick to get the characters back into the thick of things and pick up where they left off. The audience needs time to reconnect with the characters. The first few episodes should have focused on finding a lost and broken Mulder and Mulder eventually finding himself. After all, the X-Files were his life's work. They gave him purpose and drive. Their closing should have left him more emotionally and physical devastated.

I also think the 1st episode threw too many pieces of candy at the audience at once, as though it was afraid that we wouldn't bite. The pacing of the original series provided the right tempo of suspense and revelation that kept viewers hooked; it should still work with the reboot, despite our increasing demand for instant gratification.

The premise revealed thus far for the dynamic duo's next adventure is a bit far-fetched. If it is not meant to misdirect us in the mean time, then it's too hasty a show-hand.

I was surprised that the cigarette-smoking man wasn't vaping! So he somehow survived that helicopter attack eh? And I thought the actor had passed away. Bless him he's still with us.

scs said:
I was surprised that the cigarette-smoking man wasn't vaping! So he somehow survived that helicopter attack eh? And I thought the actor had passed away. Bless him he's still with us.
Click to expand...

Smoking through that neck "blow-hole" was pretty disgusting.

Hehehe, yeah. I saw that coming though as the camera moved to reveal him. I was thinking, 'I bet he has a hole in his throat."
I wonder if redesigning him with that hole and perhaps an electrolarynx would have worked.
Last edited: Jan 26, 2016

As a die hard seeing every episode from the Pilot fan, I am 2 episodes in and it seems they are testing the waters for a further season.
That said I am mildly paying attention. I enjoyed the long lost spin off The Lone Gunman more than the last 4 seasons of the X-files run, the second movie addressed Mulder's issues but it was a bust IMHO.

EDIT: Did anyone notice actors that played different parts in the original run and died showing up in the first 2 eps?
Last edited: Jan 26, 2016
2

Location
down the road from Pleasure Point.

I watched the original show primarily for the monster-of-the-week thing. Frankly there is only that many times I can tolerate the whole "alien-no it's the governmnet-wait no it was aliens-nope still the secret men at the Pentagon-oh wait it was actually alien-oh wait no no everything up to this point has been a lie" thing. YMMV.

I watched the X-files last year on Netflix. I watched most of the seasons then just started watching the list of the "main story" episodes. It got to be too much to do every single "monster of the week" episode lol.
S

270winchester said:
I watched the original show primarily for the monster-of-the-week thing. Frankly there is only that many times I can tolerate the whole "alien-no it's the governmnet-wait no it was aliens-nope still the secret men at the Pentagon-oh wait it was actually alien-oh wait no no everything up to this point has been a lie" thing. YMMV.
Click to expand...

I agree. It's best to allow the viewers to draw their own conclusions based on events in the show which may differ from that of Mulder's, rather than making him as the viewers' main guide.
S

martinaee said:
I watched the X-files last year on Netflix. I watched most of the seasons then just started watching the list of the "main story" episodes. It got to be too much to do every single "monster of the week" episode lol.
Click to expand...

I don't have netflix, but perhaps fox should consider uploading them, with ads of course, to refresh our memories, perhaps even help generate more buzz.

scs said:
I don't have netflix, but perhaps fox should consider uploading them, with ads of course, to refresh our memories, perhaps even help generate more buzz.
Click to expand...

That would be nice. I don't know if it's still on Netflix, but you should be able to get Netflix for free for a month by entering your credit/debit card info. if you don't want it you can cancel before the next month.

I'm a fan. As I watched the first episode, at first I could not believe how bad I thought the writing was, and especially the delivery of Joel McHale who seemed to break the forth wall without literally doing so, as though he was cutting himself into scenes the way he used to at times hilarously place himself in scenes artificially during his tenure on The Soup. But then it occured to me that what I was experiencing was not poor craft, but intentional. X-Files has always had nods to B-movie sci fi, which has become a subgenre in its own right. Once I recalibrated, I realized the writers were sort of channeling this aspect of the show in the first episode, going full retro as an homage to themselves, the B-Movie subgenre, and also sort of making fun of themselves. The second episode was more serious X-Files sci fi, and the third back to retro with heavy nods to low budget B-Movies and making fun of themslves. The third episode was really quite brilliant and entertaining, a classic delicious X-Files dessert. Experiencing again Duchovny's deadpan and Anderson's range is wonderful, I have missed it. I really hope there is enough fan momentum to compel the actors, producers and network to create a full season, and bring back the show for future seasons. Too cool.

Yup. LOL I watched tons of the X-files last year and was watching all the "monster" episodes when I finally realized I could just find lists of the "main story" episodes online and then just watched those. The X-files always have had cheesiness to them a little bit so it amuses me when people seem shocked by that. Especially in the "monster of the week" episodes. They are supposed to be a little bit like the Twilight Zone I think where there is a twist that's supposed to make you question things we deem "normal" in society or in the universe. I personally just like watching the "main" episodes that continue the never ending conspiracy, but that's just me 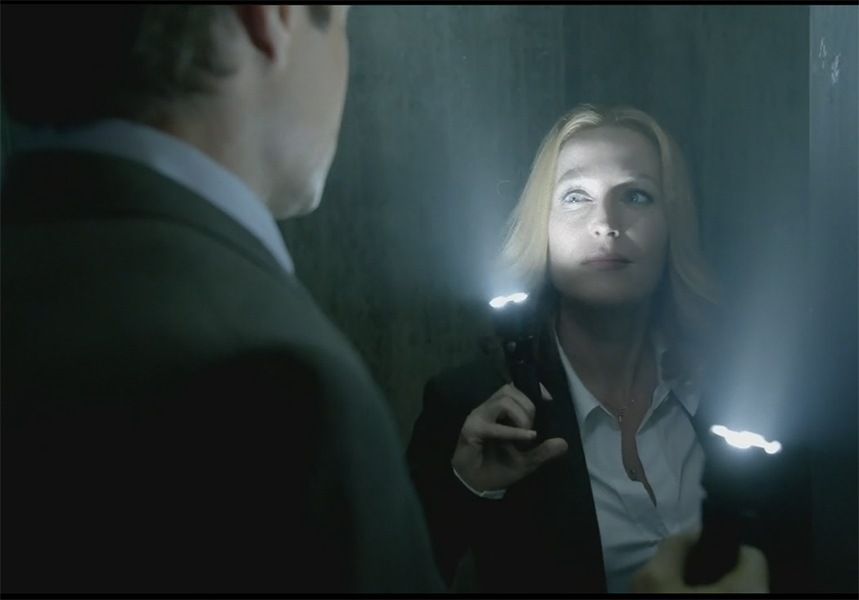 I wondered what they were.

Hey. Find that gives you Strength and Walk On!

I like how they've been making a point to stop and not-so-subtly point out things that are new from the old series. "Hey... we may be older and don't like running quite as much, but: *click* NEW FLASHLIGHTS!!!"

This is the show that I have been looking forward to the most. My wife and I used to watch the new episodes when we were dating back in the day.
K

Some files are better left closed. The episode about religion was the closest to the old series. Otherwise...the reruns are out there. queue the music...

For nostalgia, it was a dream come true.

However, the 6 episodes you got both the good and bad. Ending it on such a cliffhanger was a bummer, though.

I really hope we find a proper way to wrap up the series and not just keep doing little projects here and there. I'd be on board with another season, but as a means of closure, not just continously leaving the door open for more future episodes.

Besides, a spin off with Sully and Mulder's mini me counterparts would be fun as a new twist on the series. Regardless, I'm all for more episodes as long as they are tasteful and bring the story to a suitable end eventually. It's impossible to live up to the hype of its hey day in the 90s anyway.
You must log in or register to reply here.
Share:
Facebook Twitter Reddit Pinterest Tumblr WhatsApp Email Share Link