Just checked, and it seems to be full power strobe. Can't confirm that though, since my lightbox can't sample fast enough to measure only the on pulse. But it looks to be about that by eye.

selfbuilt said:
Just checked, and it seems to be full power strobe. Can't confirm that though, since my lightbox can't sample fast enough to measure only the on pulse. But it looks to be about that by eye.
Click to expand...

Your thoroughness and responsiveness are unmatched! I just received one yesterday and I'm LOVING it so far. Seems nearly as bright on an Eneloop as my iTP A3 XP-G on Li-Ion, IMPRESSIVE!
G

The Ti3 head will fit and function on the Lumintop Tool body. Kinda cool if you want to turn your Ti3 into a clicky.
J

I must agree with the comments here as I've been using these for gifts. The non-flashlight people I know are constantly amazed when you show them the possible output it's capable of producing. I've had Fenix and Klarus for awhile but these seem to be ending up my favorite keychain lights. That they are end-standers is a BIG plus!

How will the xpl version differ?
S

GarageBoy said:
How will the xpl version differ?
Click to expand...

Looks like they got rid of the 2 - 10 sec mode memory and levels are slightly different.

I recently received the xp-G2 R5 version, and was surprised at how green the tint fo the light is. But if you don't compare it directly to Nichia, it is not so bad. Needed to lube the oring, and that is still snugger than I would like. I am tempted to swap in the backup one to see if it is any different. Also needed to put a bit of teflon tape on the threads to minimize mode skipping. I like starting in firefly for how I plan to use this light, and the low mode (12 lumen) seems sufficient for most of my needs. if you need a high mode the 120 lumens is screaming bright. This won't be my EDC light, or even my bedstand light as I thought it might. The color and ease of use of my Manker E01 wins. This will be my backpacking headlight / flashlight though, it is the lightest AAA I have, and when I use it with my Lithium primaries it will be less than an ounce.
S

Just finished my first runtime test on this light on high with a white 750mA-hr eneloop. Since I don't have a light meter I compared the intensity to my Maratac AAA. Maratac is rated at 80 lumen with Nichia, TI3 is rated at 120 lumens. At 33 minutes I am seeing dimming, the lights are now roughly the same intensity. At 35 minutes I decided to try cycling through the modes to see how high compared to medium. High was now somewhat lower than the Maratac, but still what I thought was much higher than medium. Light did not come back on, which suggest eneloop is below the low voltage cutoff. A minute or so later it has recovered and comes on at high, but is dimming. Not too bad . . .
S

Completed a second run time test on low (~12 lumens) with a freshly charged eneloop, same one as above. At 9 hrs, 30 min, I took the battery out to measure the voltage, 1.15V. At 10 hours I stopped the test, light had not dimmed yet. Battery was at 0.97V and rising, would not have gotten much more out of that cell. My light must be a bit lower output than most, as my run time seems much longer than this: 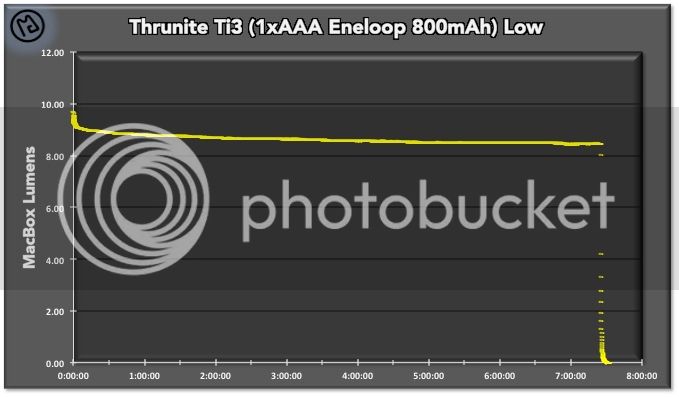 Looking forward to using this light on my JMT trip this summer with a lithium primary, 19 hours on the 12 lumen mode!!

I find another thing very interesting about the graph taken by TIN vs the measurements I have made on my lights, specifically the two models that we share, Manker E01 and Thrunite Ti3. The graph shows the light output of the Manker a bit lower with a longer run time. I have measured the current being demanded from a power source at various voltages and I find the two lights are nearly identical at the low level (not firefly), at least to the point I have characterize. I have a couple more data points to gather on the Ti3.

I will start a run with the Manker tonight and see if I can get 10 hours out of the same freshly charged eneloop that I used for the Ti3 run on low above.

Meanwhile, I also find it interesting the Manker and Thrunite share the same firefly current demand characteristics. While the Thrunite draws about 2x the current on firefly, they both demand less current as the voltage drops. This is in contrast to what one would think of normally as constant current regulation. IF the current to the emitter is constant, then the power drawn from the battery should be constant. I find that to hold very closely when measuring lights in modes up to 0.1A or so. But in high modes, where currents approach and exceed 1A, I generally find that the power into the light increases as the battery voltage decreases. I think my test setup contributes to this measurement phenomenon, as I am simply holding short wires from a regulated power supply to the drive board, and I suspect I don't make good enough contact at the higher current levels to get good measurements. I definitely observe the measurement fluctuate and often pick a current value as the display of my power source fluctuates.

Anyway, I will report back tomorrow the results of the Manker E01 runtime at constant output. My comparison sources is the Ti3, while the tint of the light color is very different, the intensity is very close.
Update: measured battery in Manker at 9:30, 1.16V. at 10 hours the battery measured 1.03V with the voltage rising. Slightly less current in the Manker, slightly more voltage at 10 hours. Physics is a beautiful thing.
Last edited: Apr 27, 2017
You must log in or register to reply here.
Share:
Facebook Twitter Reddit Pinterest Tumblr WhatsApp Email Share Link