The tm11 was kind of a classic IMO, at the time 2000lm and a coke can size with not much competition ! Here we have more than 3 X the output , cheaper than the tm11 when released, but a lot of completion as well! Pretty spoiled for coke can monster lights right now .The tn36 and mm15 are my two fav coke cans (the SRmini is a good small flooder too).

The tm06vn also impressed, the U3 led swap and boost gave a crazy amount of throw and flood that just should not come from such small reflectors......Just could not get on with the cell drain in standby(several turns to unlock ,does vary depending on cells ) , wrong print on the side annoyed and the feel in hand just did not feel right after a few uses. Good light,nice creamy white tint , just grew off me over the months....

Not too long after the MKR version(or that's how it feels) the xhp70 came out which will not help popularity I guess. The MKR's are the only ones I have housed in the tn36vn and it impresses me every time I power it up. Decent throw with all things considered and a flood monster........pretty amazing output and a useful one too. Tint wise , it's meant to be CW but it looks more closer to 5000k or less to my eyes, certainly no blues ,if anything a tad on the yellow side of white. Rendition is good anyway from the MKR's .

XHP70's like yours in the UT version I like a lot, mine are housed in a tk75vnQ70 and one de-domed in a k60vn. I prefer the tint in the de-dome as a little closer to neutral. But what an led , a beast and very bright. It won't fail to impress that's for sure!

The UI with an instant moon (press and hold from off)or turbo works well(double click or from any mode double click) is very useful .
My two fav flooders in can size

4-5 years ago, it was mainly Jetbeam & Sunwayman for me.
Then Nitecore came along with their Tiny Monsters.
Lately, Thrunite has been really on the ball in recent years!

Agree, thrunites have come on great and make some real nice lights.

Now I think you need a throw monster , check out the acebeam k70 to complement your flooder. Very nice built lights as well , and pushing the boundaries !

The Acebeam K70 with 1.3 km throw is mighty impressive; I'll have to save up for that - thanks for getting me up to date with the current throw king.
P

Got my TN36 UT & NCR18650GA 3500 mAH.
The TN36 looks a trifle bland in the styling, and very large, heavy and tiring to hold in average sized hands.
The hold down moonlight mode is great, however the quick double press turbo is clumsy compared to the Nitecore TM11's full press for turbo.
For such a big flashlight, turbo is more important than moonlight mode.
However, on turbo the TN36 UT is an absolute delight with a huge hotspot, and a bright and wide spill beam for practical flood; the old Nitecore TM11 just dies with a tiny hotspot and a comparatively darker and narrower spill.
The TM11 does have a brighter hot spot for greater throw, but I don't really need the throw in this class of lights.
Last edited: Apr 4, 2016

So i presume happy You will soon get used to the quick double click and will find it consistent in short time.

Must admit its a hefty solid chunk of light!, nicely made............feels quality and more than worth the money imo.
P

At first I did not like the TN36-UT because its styling was a bit boring, and it was far too big and heavy to grip.
However after a while, I find that this TN36 stays on 7300 Lumen turbo for a long long time, without constantly stepping down due to heat build up like my 1st generation stylish & compact to grip 2000 lumen Nitecore TM11.
After a while, the TN36-UT becomes too hot to hold! The 1st gen Nitecore TM11 never reached such temperatures, but then it would constantly step down in brightness.

As I do with modded lights I do the same with any once it starts to get too warm /hot I dial it down. Just never leave tail standing on turbo.

7000lm is a heck of a lot, the rc40 which is HUGE compared gets 15m before stepping down iirc...So a coke can , it's a lot to ask. Bonus though of high mode around 2500lm is higher than the old tm11 and will run for longer periods . This output is great for most uses, then a blast to scan on turbo. Really turbo modes are just that ......a blast and not really for long periods of use. All things considered (size/output) it does put a lot of lights to shame imho .

Thank you for the review, selfbuilt! 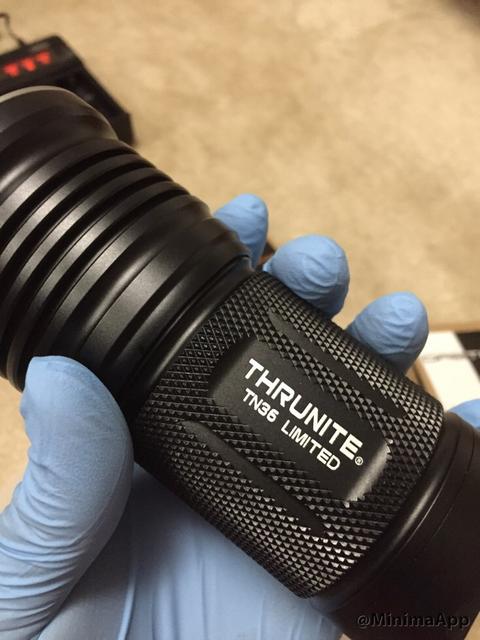 Just purchased a Limited Edition. It is perfection. The quality is as perfect as ever before, and the new CREE XHP-70B emitters make this the most spectacular, perfectly crafted Pop Can Flood Monster imaginable with early 2018 technology.

If you’re wondering what to do with that spare, extra $179 reserved for a World-Class monster perfect quality soda can floodlight that can turn the haunted Overlook Hotel into brighter than daylight, this Thrunite TN36 Limited Edition is perfection. Deep heartfelt thanks to the great Selfbuilt for starting the revolution!

There is no donut hole and I got the Cool White. 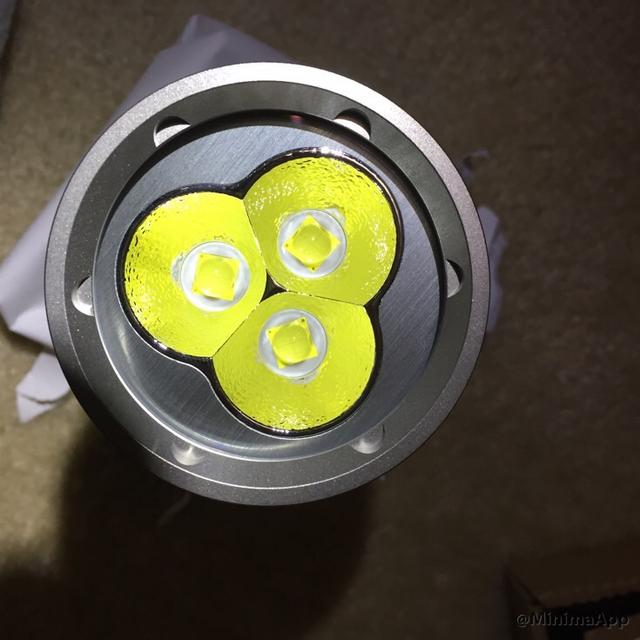 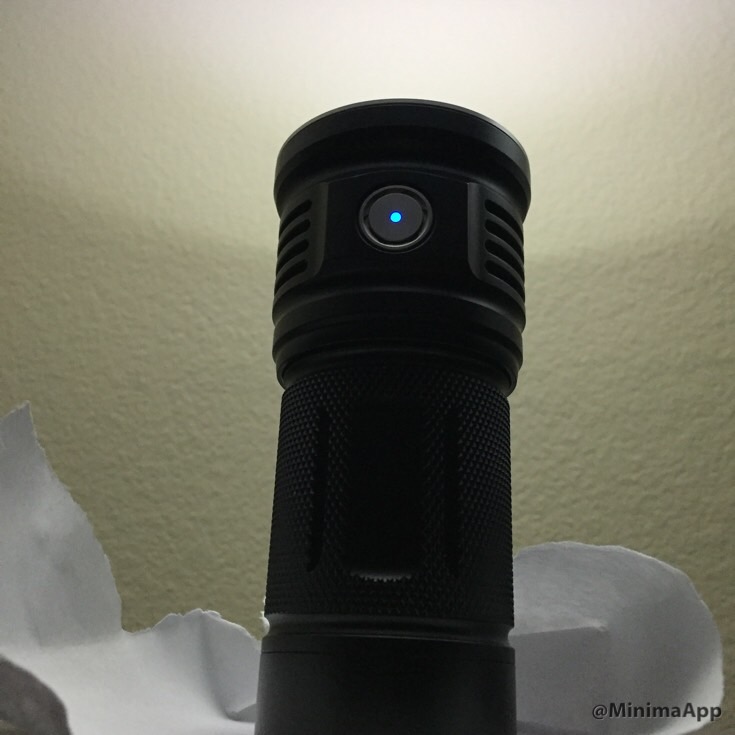 search_and_rescue said:
Just purchased a Limited Edition. It is perfection. The quality is as perfect... ... ...
Click to expand...

Nice! Thanks for posting about the current version of this power flooder, and for the happy TN36 memories, too.

I got my Thrunite TN36UTvn spec 1, XHP70, about 13,000 lumens, in Jan. 2016, the ceiling bounce monster of its time. I edced it for a few months. That's how excited I was about it. My most "beat up" light, from work horse use. My next dedicated flooder purchased was the TK75vnQ70, and next after that I got the X45vn XHP70.2, which is my current dedicated flooder. I use it almost every night.

The TN36UT seemed big when I got it, but now it seems compact compared to 4 x XHP70.2 flashlights.

selfbuilt said:
You are right in this case - the anodizing is irrelevant on the TN36, since contact is made through the battery carrier end plate (as is the case on most lights with carriers). I've corrected that line in the review.

But for most of the flashlights I review, anodizing does matter - in the tailcap. ...
Click to expand...

So on my TN36 Limited... I cannot remove the tailcap... only the head from the body.

There is a seam, seems like it should it be removable - can anyone confirm?

Maybe mine just got screwed on too tight at the factory.
S

So on my TN36 Limited... I cannot remove the tailcap... only the head from the body.

There is a seam, seems like it should it be removable - can anyone confirm?

Maybe mine just got screwed on too tight at the factory.
Click to expand...

I have not TN36 but TN30 2016. It's basically the same light but with different emitters. I use to separate the whole battery tube from the head and I think that is what's intended to do.

i have had 2 tn36 since they came out. the tailcap is sealed on both lights.
R

So many happy memories! This is my most beat up light. The tail cap is sealed. This topic thread is not sealed. That makes me happy!
S

I am tempted to get TN 36 Limited edition with the stepless brightness function and turbo mode of 11000lm. It's available in desert tan color as well. The question is how efficient the CREE XHP70B LED is. Is it able to maintain a certain time (more or less) stable output at 8000lm? I have not yet seen any runtime graph of this light.
Last edited: Sep 9, 2020
S

I am also considered the TN36 Limited.

Can anyone tell me at what output you could run this light (say 1.5 hours) without it getting too warm.