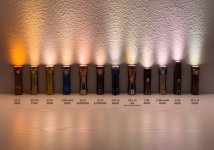 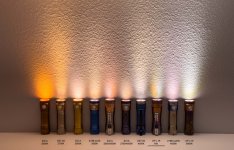 Most impressive. Caution is advised though regarding making decisions based on group photos with such varied color temperature. What may look subpar in a crowd could very well be just fine by itself. Sometimes an acknowledged excellent emitter will look dingy compared to a cooler temp. LED. Doesn't brightness, lenses and reflectors also affect the look of a beam?
8

Thank you for taking the time to put this together!
Big Aloha, D
C

KITROBASKIN said:
Most impressive. Caution is advised though regarding making decisions based on group photos with such varied color temperature. What may look subpar in a crowd could very well be just fine by itself. Sometimes an acknowledged excellent emitter will look dingy compared to a cooler temp. LED. Doesn't brightness, lenses and reflectors also affect the look of a beam?
Click to expand...

Cheule here! I did my best to equalize as much as so could. For example, all lights were running stepped mode, step 4 of 7.

But differences still arose in the form of:
- some lights have the 10623 optic vs the 10622 (this is probably the biggest difference)
- some lights kept stepping down while I was shooting. It was like playing “whack a mole”. Especially the Ti bodies. They just don’t sink heat nearly as well as Al or Cu bodies

I did do my best though to accurately represent the colors as I could.

And a final thought: I don’t think there is a bad emitter in this bunch. It’s taken a lot of lights bought and sold to get to this point. Anything green or unsightly has moved out of my collection. But not I’m to a point where I love what’s left in the edc collection. Note that most of these lights aren’t XP-L HI. I just don’t seem to like them much.
Last edited: Aug 4, 2021

Every LED have their own place in my heart. They all "shine" in specific lights. Really impossible to say one is better than others in terms of color rendering and applications.

Cheule,
You have an impressive collection, including your laser flashlights. Thanks so much for taking the time to share. How long now have you been purchasing great quality flashlights?
S

Wow Vinh actually care about tint now! What a suprise!

I didn't make the shots but yes I have became a huge fan of warmer tints lately. It seems I have a fav LED for every application.
S

I've been in love with 2000k tint since I had kids. I use it to check up on them at night without waking them up. I now leave a E21A 2000k on at night in their room in moonlight mode. It's fantastically warm and cozy.
S

Vinh, you might want to consider getting some of these 1900k HI CRI leds to mod. It doesn't have to be flashlights. Maybe night lights. I will definitely buy some if used in the right application.

The warmest LED's that I own are 4000K but I'm open to the next step. I can see myself picking up a 3000-3500K, 95 CRI light in the near future. It will probably be some kind of hiking light for bringing out the colors of close by wildlife. 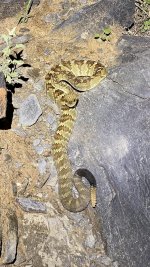