How bad is the tint shift on the Zebralight SC600w Mk IV Plus?

Are there some good photos comparing it to other Zebralights? I have the SC600 Mk II (not L2), so I know what the tint shift looks like on that model.

Is the tint shift better on current versions of the IV Plus? Have people returned the light due to tint shift, or any other reasons?
W

I just received my SC600w MkIV Plus today. I'll probably do a review on it, if I get around to it in the next couple of weeks.

Anyway, I don't find the tint shift objectionable. Yes, there's certainly a noticeable tint shift when doing a white-wall test, but in actual use I don't notice anything. The tint shift is fairly typical of other domed Cree emitters. They all have a white center, yellow/green corona, and a purplish spill. I'd say the 50.2 emitter may be a little more noticeable than average, but not by much.

Unless you're looking for perfection, I don't think it will bother you. If you want something much better, then get the SC600w MkIV HI. The flat HI Cree emitters have very little tint shift. (I love the tint of my SC600w MkIV HI.)
P

That is good you don't find it too bad. Think you can post a pic that best represents what the eye sees when wall hunting?
W

Here's a beam shot of the SC600w MkIV Plus. White ceiling, auto white balance, auto exposure. It's pretty much what I see, though the spill is kind of lost in the dark of the image (less dynamic range in a jpeg than the human eye can see). 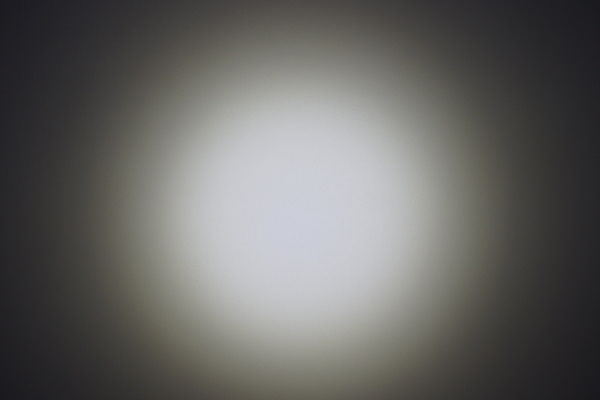 Wow, I see almost no tint shift in that image. It looks better than my SC600 Mk II. Thanks for the image.
T

It's probably comparable to most domed Cree emitters. White spot with a slightly green and warmer corona, and purple and cooler spill.
P

Well, if it is not worse than the Zebralight with XM-L then I can live with that. Sounds like I should order it.
W

It's not any worse than the XML based Zebralights. I think, though, there's always a tint lottery with Zebralight. But on the good side, I think they've been getting more consistent (and better) over the past couple of years. My most green Zebralight is my oldest Zebralight. My best tint is the SC600w MkIV HI that I bought earlier this year.

This SC600w MkIV Plus I just bought (beamshot above) is about what I expected. It's not perfect, but you can't see any tint shift in real-world use. And, it's freaking bright for a single-emitter light. I measure 2700 lumens on max, which is more than what Zebralight claims (2300 lumens). The other modes I measure to be in-line with the specs, and I measure other Zebralight maximums to be about what they spec, or slightly lower. So, I don't think my measurements are wrong, at least not by much.

Run time and efficiency is great, too. 5.7 hours on the (non PID) 358 lumen level, using 3500mAh Sanyo GA cell. I'm going to do a run-time test on the (PID) 705 lumen level next, but I need to cool it so that PID doesn't kick in and mess up the results. I expect about 2.5 hours. It's probably not worth testing the highest two levels, since PID will almost certainly kick in to control the temperature. Maybe I'll try those levels next winter.
P

2700 Lumens? Wow. I wonder if you got lucky, or your measurement is off at higher lumens. I don't think I have seen others mention higher lumens, did I miss mention of it? Also interesting if true since originally Zebralight listed 2460 lumens but reduced it later on.
W

PocketBeam said:
2700 Lumens? Wow. I wonder if you got lucky, or your measurement is off at higher lumens. I don't think I have seen others mention higher lumens, did I miss mention of it? Also interesting if true since originally Zebralight listed 2460 lumens but reduced it later on.
Click to expand...

Yes, I also wondered if I was wrong on that measurement. I think floody lights are harder to test for me, so that might have something to do with it. My measurements for the Plus's modes are as follows:

All those modes except High1, I measure to be close to Zebralight's specs, or even lower than their specs. There's no reason why I would be wrong on High1 but accurate on all the others.

It's possible that Zebralight's specs on all the other modes might be overstated, but generally they tend to be fairly accurate on their specs. Though I find the SC600w MkIV HI is overstated, but I think that's because they just copied the outputs from the non-HI XHP35 version and forgot that a HI emitter gives less output.

I'm doing my measurement on a cool light, right after I turn it on. I should do a measurement at 30 seconds, which is what the ANSI standard says is how to measure the output. It's very likely that the 2700 lumens will drop to 2300 lumens by that point. An LED emitter becomes less efficient the hotter it gets. So at a fixed current, the light will definitely be significantly brighter when it's still cool. On max, that emitter is going to get hot pretty fast.
P

I think you may be right about the 30 second thing. Try room temp, not holding it, no fan, and then a 30 second reading. Be interesting to see what you get at 60 seconds as well.
P

I decided to order one. At least I will be able to see the tint for myself. I don't have a way to test lumens, but I can see if it noticeably dims within 30 to 60 seconds. I have several Zebralights, but this will be my first with G6/G7 so I am looking forward to the additional customization options.

I bet they will add a ramping mode down the road. Maybe call it G8. Single click is H1, Double click is M1, press and hold to turn on low and start smoothly ramping up instead of just L1,M1,H1. You could even have a G9 that works the same but ramps up slower and H1 is last brightness memory.
W

PocketBeam said:
I bet they will add a ramping mode down the road. Maybe call it G8. Single click is H1, Double click is M1, press and hold to turn on low and start smoothly ramping up instead of just L1,M1,H1.
Click to expand...

I like it! Add that a double-click while on will go to H1, and I'm happy. What the current interface is missing is a way to get instant high when the light is already on medium or low. With a ramping option, double-click isn't needed for mode programming, so it could be used as a quick way to go to max.

I still prefer lights with regular modes, so I'm not sure ramping is needed, but it's a cool idea.
P

For instant high, couldn't you set G6/G7 so that L2 and M2 are set to high? That way a double click would get you instant high on medium or low.
W

PocketBeam said:
For instant high, couldn't you set G6/G7 so that L2 and M2 are set to high? That way a double click would get you instant high on medium or low.
Click to expand...

Yes, that would work. But I'd lose 2 modes, which I'm probably not willing to do. Thanks for the idea, though, maybe I'll try it and see how it works.
P

You have three settings groups to play with, G5(is that right?), G6 and G7. So you could setup G6 or G7 that way, and still have two other setups that are more traditional. On mine I will setup G6 as one click medium, two clicks while on for a higher medium. And the G7 will be one click medium, and two clicks while on for a high. I only use three brightness levels, low for dark house walking, medium for close work, and high for distance spotting. So I can duplicate brightness levels and not lose functionality. Programming this is going to be fun.
W

I have so far kept things simple on my Zebras with the new UI. I don't want to get confused when I use my older Zebras. So, I've made sure that the lowest modes are long-press, highest modes are short-press.

The new Sc600's don't have very useful moonlight modes (too bright for my taste), so I haven't bothered with low modes. These are strictly for outdoor use (G6), or ceiling-bounce room illumination (G7). No need for lows in those cases. If I want the lows, I can use G5.

It's simple, boring, yet gives me access to all the useful modes.
P

That is an interesting setup. Makes sense for outdoor use.

I noticed the lowest low is brighter on this model. I think it should be OK for walking around the house at night. But I will find out on Friday...
W

PocketBeam said:
I noticed the lowest low is brighter on this model. I think it should be OK for walking around the house at night. But I will find out on Friday...
Click to expand...

It's far brighter than the lowest lows on the older Zebralight models. I use a SC5w for middle-of-the-night use.

WalkIntoTheLight said:
It's far brighter than the lowest lows on the older Zebralight models. I use a SC5w for middle-of-the-night use.
Click to expand...

Don't want to get off topic, but I just noticed how I miss the lower mode on my SC64w as well. 0.07lm sounds ridiculously low on paper, but the 0.01lm on my old SC63w was really useful. Walking around a house last weekend that I was only somewhat familiar with at about 4am...that 0.07lm could light entire rooms.
You must log in or register to reply here.
Share:
Facebook Twitter Reddit Pinterest Tumblr WhatsApp Email Share Link

At what +/- DUV do you start to notice a greenish/rosey tint?