Hi guys,
I just wanted to share a pic of a couple first article sample clips I got the other day. I get these in a bent and semi-finished form. I have to form the radius for the "saddle" mount on the light as well as bead blast the clip. With my current and primitive tooling, I won't consider doing this final work in any numbers. There is also the issue of drilling and tapping the light which is not trivial unless some jigs were made.

I am still trying to figure out how to deal with the issues mentioned above. The clip shown on the A-19-2x123-F is the part I have chosen to go ahead with. I want to explore these clips further and frankly, as I get it with the flat mount, it seems to be worthy of at least a modder's status and possibly a part worth considering for a pocket knife. /ubbthreads/images/graemlins/icon3.gif 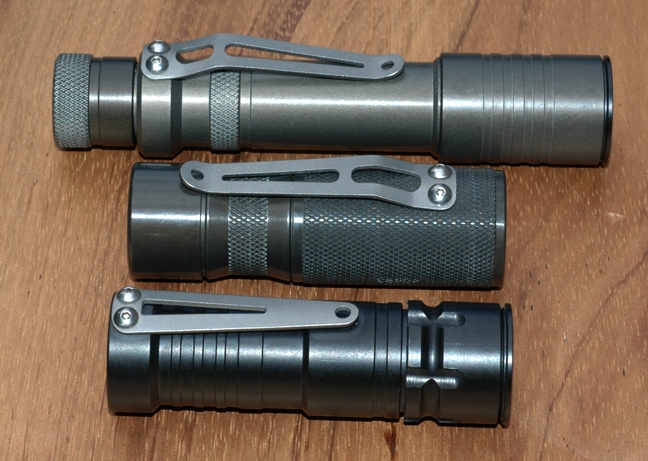 I selected the clip with the window partition that is at the max height and bend of the clip as the way to go because this will provide a lanyard, nano clip, or split ring attachment point if desired with the least encrochment on the function of the clip.

The 2x123-F tube could be blind drilled and tapped with the proper equipment or carful machining. I opted for through drilling and tapping as this light is a Nichia 395nm UV number and I will be using it in my shop and not out in any nasty weather. I suspect that proper thread sealing on the screws would preclude anything but water under pressure from causing any trouble anyway. /ubbthreads/images/graemlins/icon3.gif 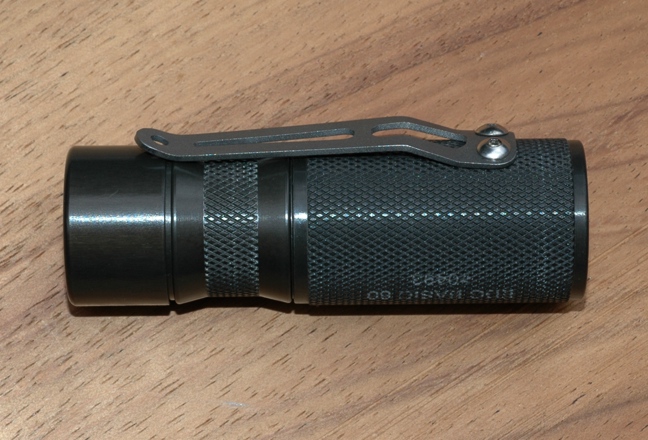 And the above photo has made me realize the main reason I dont like it...
its Flat!

Your bent ones look MUCH better, and I think would be much more functional also.
Even thought he PD is sorta using its body to hold onto your clothing, the bent ones seem to do better.

I also like that they have the 2 slotted sections in them, not just one,
its the lettle things like that, that can make a much larger difference than you think.

These appear to be much better than the "standard" clips...at least in my humble opinion!
/ubbthreads/images/graemlins/icon3.gif

I have a titanium clip of similar profile (though a bit larger) on my Gerber Airframe folding knife and I like it very much. Best clip I ever had on anything. I'm sure it will work great on flashlights. Easy to clip and slide in all the way, secure, and friendly to whatever it clips onto.
X

It seems that the pocket clip is a very underestimated part of many edc's. It is often barely an afterthought even by many of the best light makers around here. If a versatile clip could be made and kept available I bet many modders and makers of lights would design it into their custom run lights. The HDS and a controversial small run light have laughable clips on them. Using Ti makes them very appealing and offers interesting finish options.


I'd also like to see a clip with a stamped slot in it to accomadate a tritium. This would sure beat milling slots into 200 dollar lights and worrying about having to dig broken trits out of them.

That's what I'm talking about!!!

Perfect, and I agree with your choice! (As if that matters.)

The one weakness I could find in the Aleph series is being addressed!!!

How would they look without the beadblasting?

jtice,
What I like about the PD clip and the fact that I rarely use it is its low profile and straight form. If I was using the clip as the common mode of cary, I would take it and give it the bends seen in these first articles. For me and inherent in the design in use on the PD, the clip is an optional method of carry and consequently is not given the "space" it would take to be more effective. /ubbthreads/images/graemlins/icon3.gif

Karl, I am sure that many will agree with you.

Xoch,
I would consider trusting a milled window for H3 if it were at the base or in an area where the clip is not flexing but I have my doubts as to the security of the vial unless it were of a diameter which was less than the thickness of the clip. The vials I work with would stand proud and be exposed in a very poor location, IMHO. Certainly a shallow milled recess in the Al could host the vial and a window in the clip serve as additional protection! Do you know how much fun it would be te be able to design a real flashlight and not be constrained by resources and expenses! /ubbthreads/images/graemlins/blush.gif

Bill,
I had to provide a dimensioned drawing in the flat form and along with the drawing, I explained that I wanted the partition at the high point and bend. The first clip was per my drawing and the selected one was a redesign based on the bent result. The only advantage to the clip on the HDS would be if one were to design a simple "T" toggle that could insert and then be wedged as an attachment point for lanyard. It's an interesting idea, IMHO but I try to kid myself only half the time! /ubbthreads/images/graemlins/blush.gif

The clip needs some type of surface treatment to blend in the tooling marks after the final forming. Bead blasting is neutral, resonably quick and wears as well as others. These clips can be taken to a buffing wheel and given a mirror finish if one were so inclined. I think that might look cool on a chrome unit as the finish would be the same and only the tint of the metal being obvious. For simple installation by a DIYer, the best method, IMO, is to drill and tap one hole where you want it and then mount the clip with one fastener and then use the other hole as a visual means of identifying the location for the next hole. For a modder who wants to be able to provide clip installation in a reasonable and profitable fashion, I think some jigs with drill bit guides would be the best approach.

Those of you who use your clips should consider bending them to your will and wishes! Proper adjustment for a silk shirt pocket is not what you would want for attachment to a leather belt on your waist!

I really like the low profile clip that comes with the PD. When in the pocket, you do not even realize that it has a clip.
And any paracord works perfectly for lanyard use by utilizing the top of the slot.
[image]http://

Great clips....I agree with Anglepose-the low profile PD clip is awesome! Don-I may be wrong but can't we bend those Ti clips to our own liking without weakening or ruining them?

Daniel,
The clips can be bent well beyond reason before they fail and snap. The bends seen in these prototypes give a good indication of what can be done. You can also take the clips up to red hot for greater deformation and less force required. I suggest removal or good support of the clip before any new bends are introduced; and certainly before the torch comes out! /ubbthreads/images/graemlins/icon15.gif
S

How much for the HDS clip?

These clips are currently not available in any state of completion, for sale. I was excited about them and wanted to share them with you guys because there was no one else to show! /ubbthreads/images/graemlins/blush.gif My bad! I am working towards at least a modders solution if not an ideal bolt on finished part. I will keep you posted but in the mean time, please no E-mails wanting to buy or offering to beta test. Thanks.
C

You are on the right track . I like the clip on the PD , very strong and unobtrusive , perfectly in keeping with the spare design . That HDS retrofit is beautifull , that addresses a major issue with that lite . I would tend to agree that the lack of a clip system is a weakness in the Aleph system . My two Aleph 3's live in holsters , but if I had a A1 or A2 , I'd want a clip .

Hi Don,
i was curious if the holes on the clip on the Aleph were the same as the ones on the PD?
thanks,
chris

By design, the center to center dimension on the holes of this "universal" clip is the same as that on the PD. Until I get the production blanks and final form them, I will not know if there will be an interchangeability or not.

Just a Idea for a Uinervisal aleph clip In TI. You could make it a rap around simmilar to the axcserey clip offered with a [email protected] 2AAA so it would slide over the barel... Probley would mar the finish though /ubbthreads/images/graemlins/jpshakehead.gif. Just a thought. I just ourderd my first Aleph 1 from the shoppie.

If it's a stupid idea, I share in it! My problem is finding a solution for the roll forming.

S
Clips for a Haiku
2

Don? Where can i get your titanium screws?