It's been a few years since I worked with a design based on a tighter and more collimated beam; "throw" to most of us. Candidly, the Haiku takes care of most of my outside illumination needs as I rarely go beyond my backyard at night and the Haiku is more than adequate.

However, there are times it would be nice to have a light that can reach beyond the Haiku and certainly the LED's are now up to the task!!

I have been thinking about such a light for quite a while and I also wanted it to be part of the current "family" of my offerings.

I came up with the Makai: 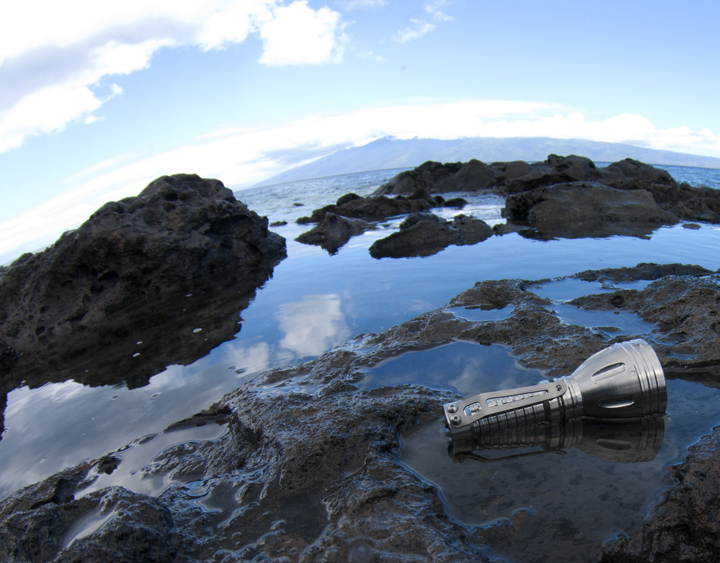 Makai is a Hawaiian term used to provide direction and means essentially "towards the ocean".

For me, it is most likely in and around the ocean that I will use my Makai. With this in mind, I wanted the Makai to be up to the environment just as the other titanium lights I offer.

With a large diameter reflector (38 mm) One of my first concerns was the window material. I bit the bullet and went with a sapphire window that is a beefy 3 mm thick and diameter of ~ 41 mm. 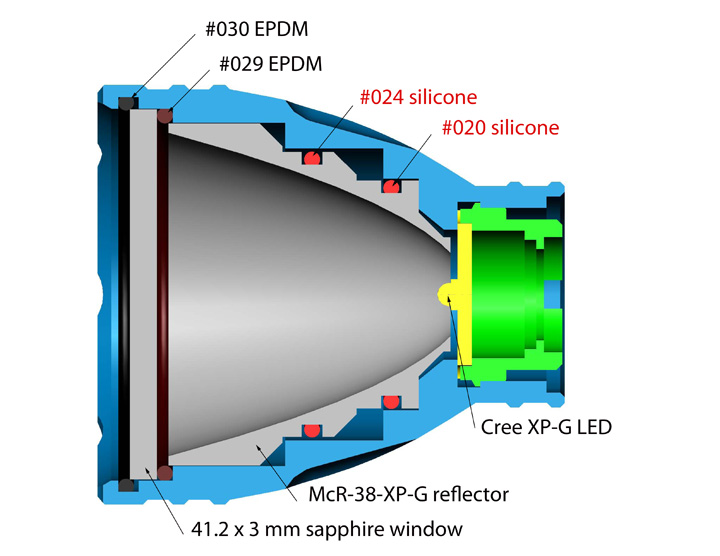 None of my lights are suggested as dive lights but by design, they should be up to submersion and indifferent to some water. The McClickie paks are certainly the limiting factor in terms of viability when submersed. 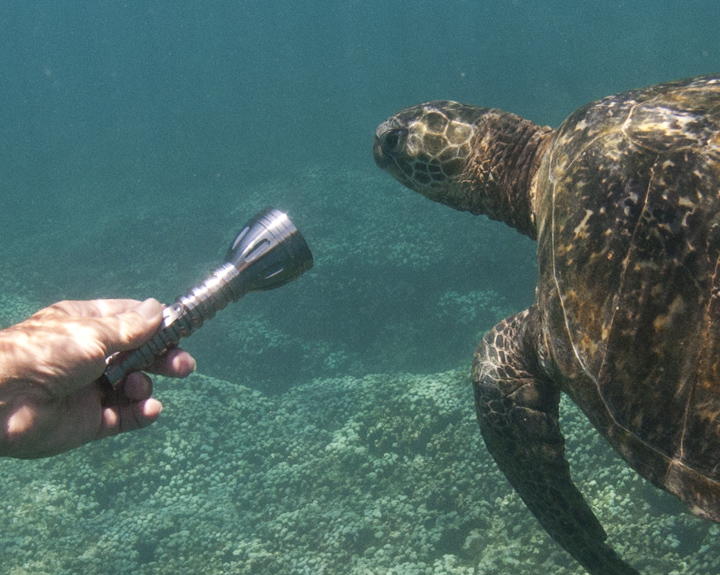 If the lights can go where the turtles go, I am satisfied. 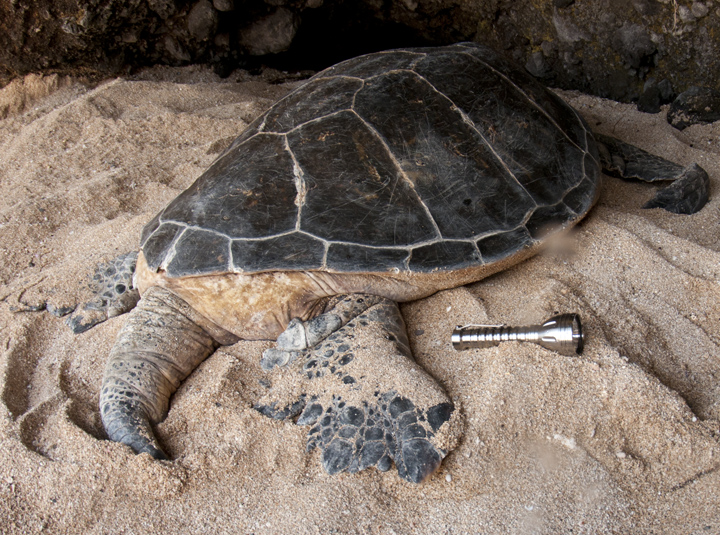 The Makai is host to a XP-G LE but unfortunately the LED lead wires require a different exit and mounting location on the MCPCB so XP-G LE's designed for the Haiku are not viable or compatible in the Makai and vise-versa.

Depending on the LE converter, the Makai can be hosted on all three of the McCLickie paks in the current offering: 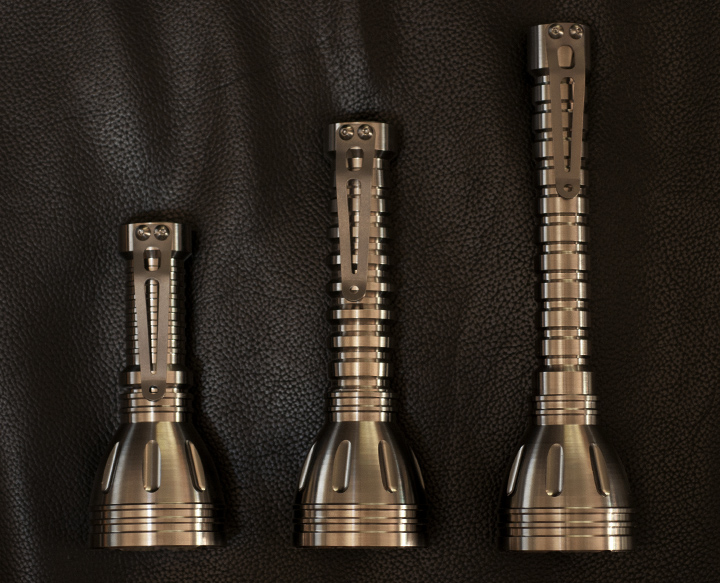 My original plan and hope was to be able to offer the Makai initially in all of the above assemblies but this was predicated on me having a new buck 3 speed converter on hand which has not panned out. I have a prototype 3S Buck converter but proven and production units are still vapor at this point and I don't have even a reasonable guess on when they might be on hand.

With the prototype 3S Buck, I have been able to do some preliminary evaluations though.

For beam comparisons I used my Haiku XP-G as the bench mark. I adjusted the manual exposure in the shots below to provide a reasonable exposure in the spot portion of the Haiku. This ended up with a much darker image of the field of view than I perceived with my naked eye. (Like I said, my back yard is more than adequately illuminated by the Haiku) 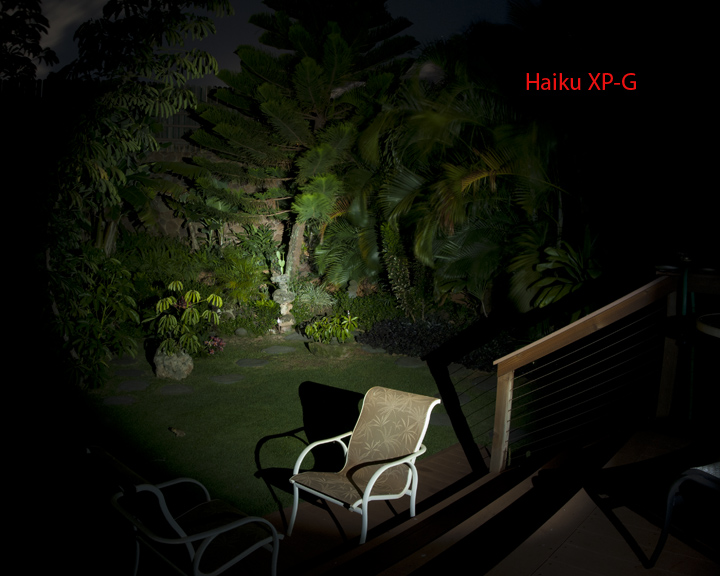 Next up is the Makai with a LE comparable in flux and drive current as the Haiku XP-G so the only real difference is that of the reflector. 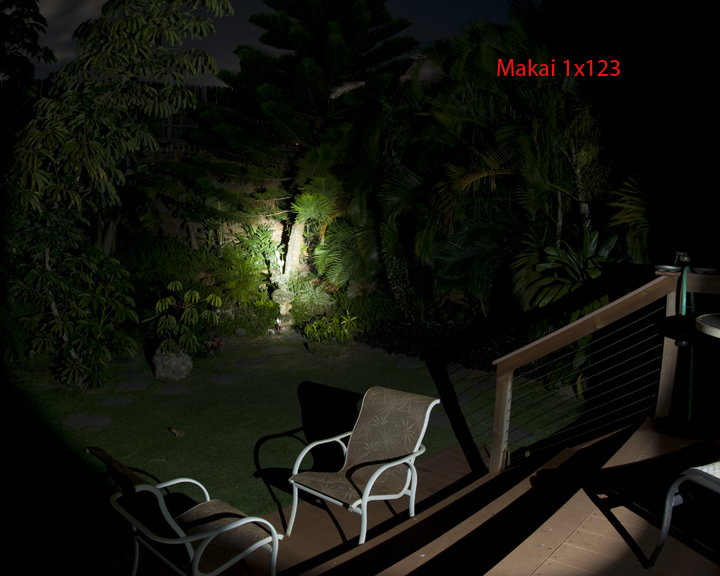 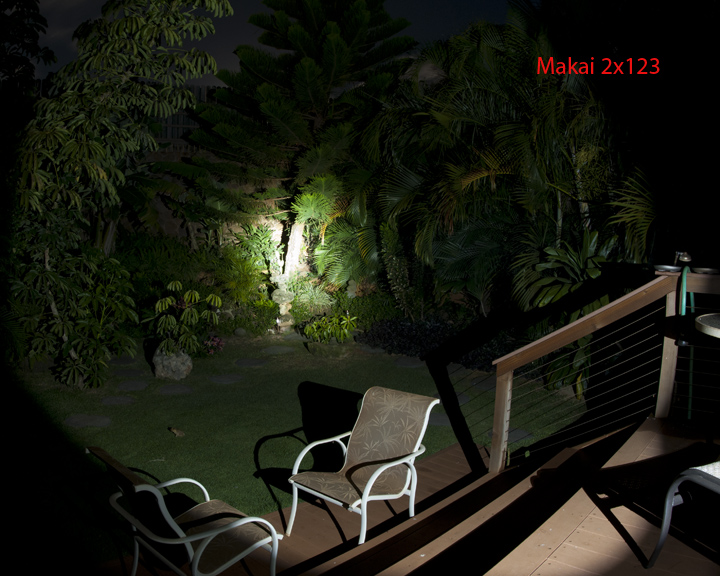 Obviously way too much light in the spot beam and these images are darker than reality. The exposure used really doesn't do the spill portions of the beams justice but that's not uncommon in beam shots and these are marginal beam shots at best.

I hand held the three sample lights 1 meter above a lux meter and measured (conservatively) the following:


I realize that there are other LE's and converters out there that can provide, as I understand it, more current that 660 mA from a CR123 to an XPG-E LED but the 3S converter I work with is realistically at its limit at 660 mA and certainly when powered by a CR123. I am not limited at this current level with the 3S Buck converter and I want to do further tests and thermal evaluation to identify what current level I think is appropriate to target with the 2x123 3S Buck package that I will hopefully offer down the road a bit. My guess is that I can drop the current level down to 1250 mA and not see a significant difference in flux but appreciate a cooler and longer running light. :thinking: :shrug: 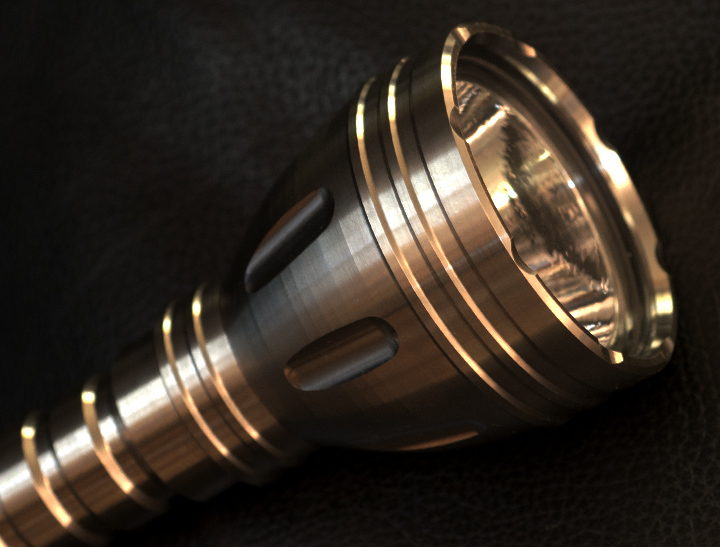 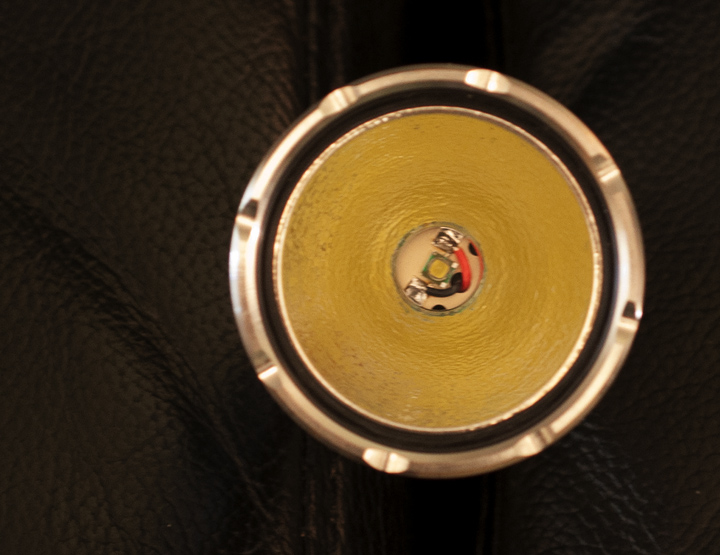 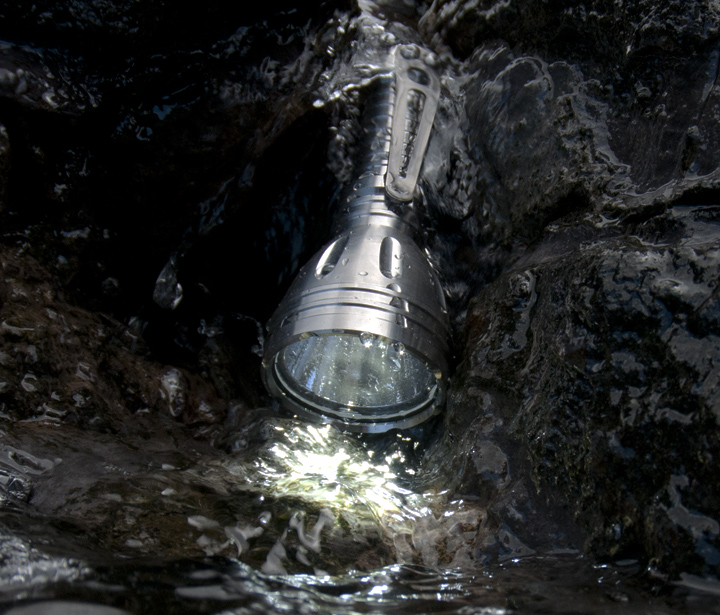 Obviously the real difference here is the reflector, the McR-38-XP-G, which is based on the original McR-38 which had its origin in my first (non flood) reflector offering, the PR reflector (thanks to Pelican! :bow

It's been a long and interesting journey for me and towards the ocean or Makai, it has been.

If I had all of my ducks (or converters) in a row, I would be following up shortly with a wave of Makai 2x123 lights but given the lack of converters and the pleasantly surprising performance of the Makai on 1x123, I figure I will be adding a Makai 1x123 and/or Makai 2xAA light to the offerings in the near future. 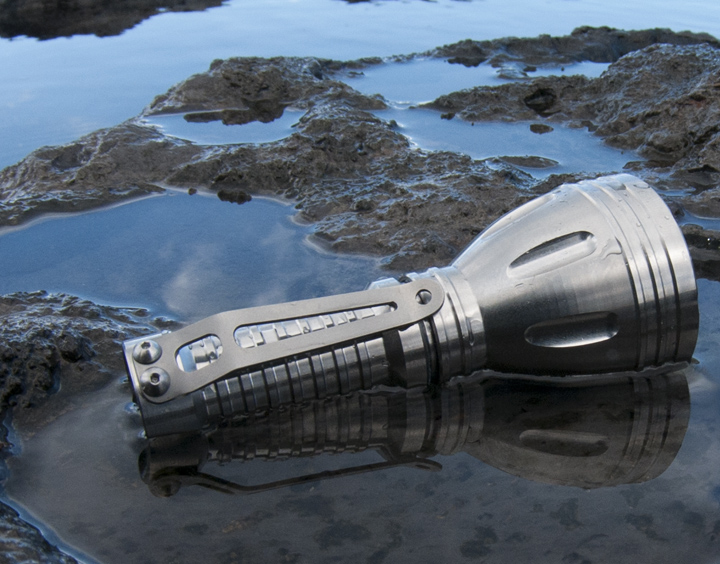 Hi guy, do to thermal considerations, the Makai 6V which uses the buck 3 speed converter has been dropped down in current drive level to 1000 mA on high. This results in a lower flux and greater run time as compared to the original plan at 1450 or 1250 mA.

Beautiful light!! Love that shot of the water trickling down on the Makai. :twothumbs

I forgot to include one other image: 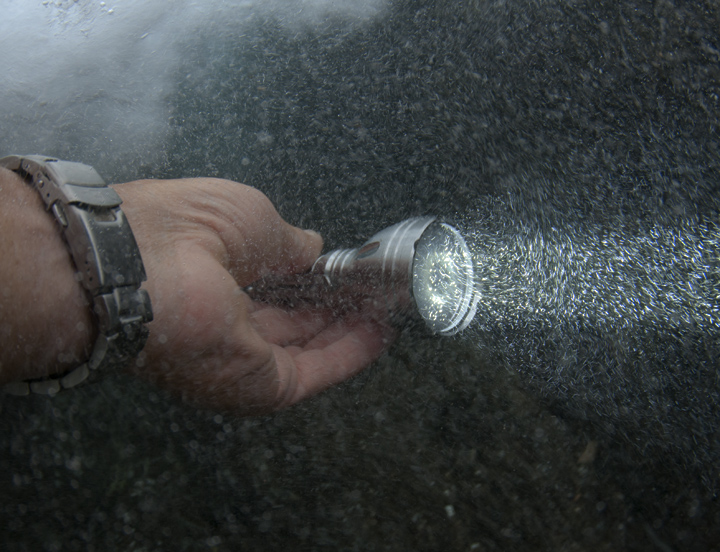 I was in a tide pool taking shots of the light and a big wave came rushing over the rocks and I just had time to grab the light before the washing machine turned on. I snapped the shutter a few times even though I had no idea what was going on down there. I kind of like the air bubbles giving dimension to the beam.

As a strange coincidence I bought an Aleph L.E with SOB1000 and XPG-R5 on B/S/T which arrived today.

I placed it in an Aleph-3 head with a standard McR38. This produced quite a nice beam with no obvious artifacts.

I'm curious as to how the McR38-XPG differs from the standard McR38?

Is the focal length shorter to optimise focus with the XPG? Will this result in a tighter spot than can be achieved with the standard McR38?

It is just personal preference but, for me, the Makai head looks best as a 1x123. Nicely balanced and quite the pocket rocket, judging from your beamshots.

I'm curious as to how the McR38-XPG differs from the standard McR38?

Is the focal length shorter to optimise focus with the XPG? Will this result in a tighter spot than can be achieved with the standard McR38?
Click to expand...

It's been a while since I did the drawings but as I recall there was very little modification to tha actual focal length of the reflector. Most of the difference is in outside profile and establishing a mating surface to insure alignment of focal point of reflector with LED image. I also started with an Aleph 3 and XP-G LE.

I haven't wanted to confuse the offerings any more than they already are but I have been open to "head only" for a while. That is to say head loaded with LE and just sans battery pack.

I would also be very interested in the head (complete with L.E) only. :thumbsup:
D

Very nice! I had been wondering if you would ever do a "throwy" light. Also interested in head and LE only.

Very nice indeed. As always I like the styling of the head + a good fit among your current lineup. I really hope you will keep the current level as high as possible with this one....
Congrats on the new design. I am in for sure!

Way cool light, Bud !
Doesn't look as big as 38mm would make me believe.
Looking fvorward to this one in da house :wave:
bernie

Location
I can see the Windmills...

Oh, that is sweet....Would love to pick up a complete unit.
M

Location
Land of the Huskers

I would be interested in a complete unit when you are able to offer it. A great looking light and I like the specs you are coming up with. Love the underwater pics and the turtle! Enjoy life and keep up the good work.:thumbsup:

I'd also be interested in head and LE only option.

YES!!! I was wondering where my next McGizmo would come from!!!!!!

From the look of it, this light really makes the case for a revised 2x123 Clicky Pak that is specifically bored to hold a 17670, because that's just about the perfect-size Pak for a head this wide. I suspect the 1x123 Pak may be too short for most people to hold comfortably, but until a 3S buck driver is available, 2x123 isn't really an option. I have no idea how much labor would be involved in adding an extra .5mm to the bore-width on the 2x123 Paks, but it may be the more feasible approach, not least because it would allow other 3.7v light-engines to be used as well.
Last edited: Jun 28, 2010
You must log in or register to reply here.
Share:
Facebook Twitter Reddit Pinterest Tumblr WhatsApp Email Share Link