Habits, triggers and knowing of them is a cornerstone on stopping.
My mom smoked 2 cigarettes a day. One after lunch and one after supper. But she enjoyed both. Most smokers only enjoy a few a day but puff, puff, puff on a bunch more. Why?
Habits and triggers mostly. Coffee was my sisters first trigger of the day so she switched to green tea. Her morning commute was another, which she said was the hardest one to over come. That was a habit. She started out using nicotine losenges on her ride to work with success. She stopped about 15 year ago and still does a losenge after lunch and after supper. Her husbands first trigger of the day was a shower. Yes a shower. He said he smoked at least 2 in the shower. How? Got me but he said that was the hardest habit to break.

A coworker told me he stopped smoking in 1974 but still wants one at certain times like while having a glass of beer after cutting grass.

I still smoke some but not after meals, nor with coffee. Not anymore. Used to be when working indoors I'd light up as soon as I went outside but not anymore. My achilies heel is while carrying on a conversation around other smokers. So I make sure I have to walk at least 50 yards to obtain a cigarette. I take a puff or two off a vape on occasion like when driving. A 1.5 ml tank lasts about 2 months.
J

chip100t said:
For months after, the moment I finished a meal and put my knife and fork down on my empty plate I would think “cigarette” and then almost as quickly I would remember I don’t smoke anymore.
Click to expand...

As its very hard to stop smoking for a chain smoker.
I hope you're getting my point.
C

jimjonas9384 said:
As its very hard to stop smoking for a chain smoker.
I hope you're getting my point.
Click to expand...

I don’t know how far off a chain smoker I was me being on 40 a day. But the first thing I did when I woke was smoke a cigarette, also the last thing at night and if I woke up in the night come to think about it.

Also what helped me was reading a little book that said to think of your addiction as a little monster and the physical craving you suffer as it’s death throes. And the harder the craving got was a sign you were defeating it and they would eventually get easier and disappear as it eventually dies.

It sounds silly but it makes you think positively of your cravings if that makes sense.
J

chip100t said:
Also what helped me was reading a little book
Click to expand...

What was the name of that book ?
C

jimjonas9384 said:
What was the name of that book ?
Click to expand...

It was a long time ago and it was in a friends van who was trying to give up at the time. I remember It was small and reminded of a children's book, apart from being about helping to quit smoking.

Well, I must say this thread has brought me (and wifey) some good laughs and good vibes ☺️ You're a natural storyteller, mister Bykfixer.

I've read the whole thing, over the past few evenings while puffing my Eleaf Basal loaded with pure unflavored VG and nic at 24 strength. 1.5 ohm coil running around 4.5 watts.

I'm a "no intention of quitting" vaper. Personal belief is nicotine is beneficial for some people, or at least on balance not significantly harmful. But I'm not arguing with anyone. There's some statistical evidence pipe smokers live longer than mean. Or maybe it's an urban myth...

My vape habit is to puff it just like a pipe, swirling the vapour and mostly not inhaling, blowing rings, occational inhaling a small quantity. This requires a pretty strong nic content, obviously.

Started off with the store bought flavors and quickly found my body doesn't like PG. Or flavors. I like the flavor of nicotine and VG. Subtle sweetness with pepper.
R 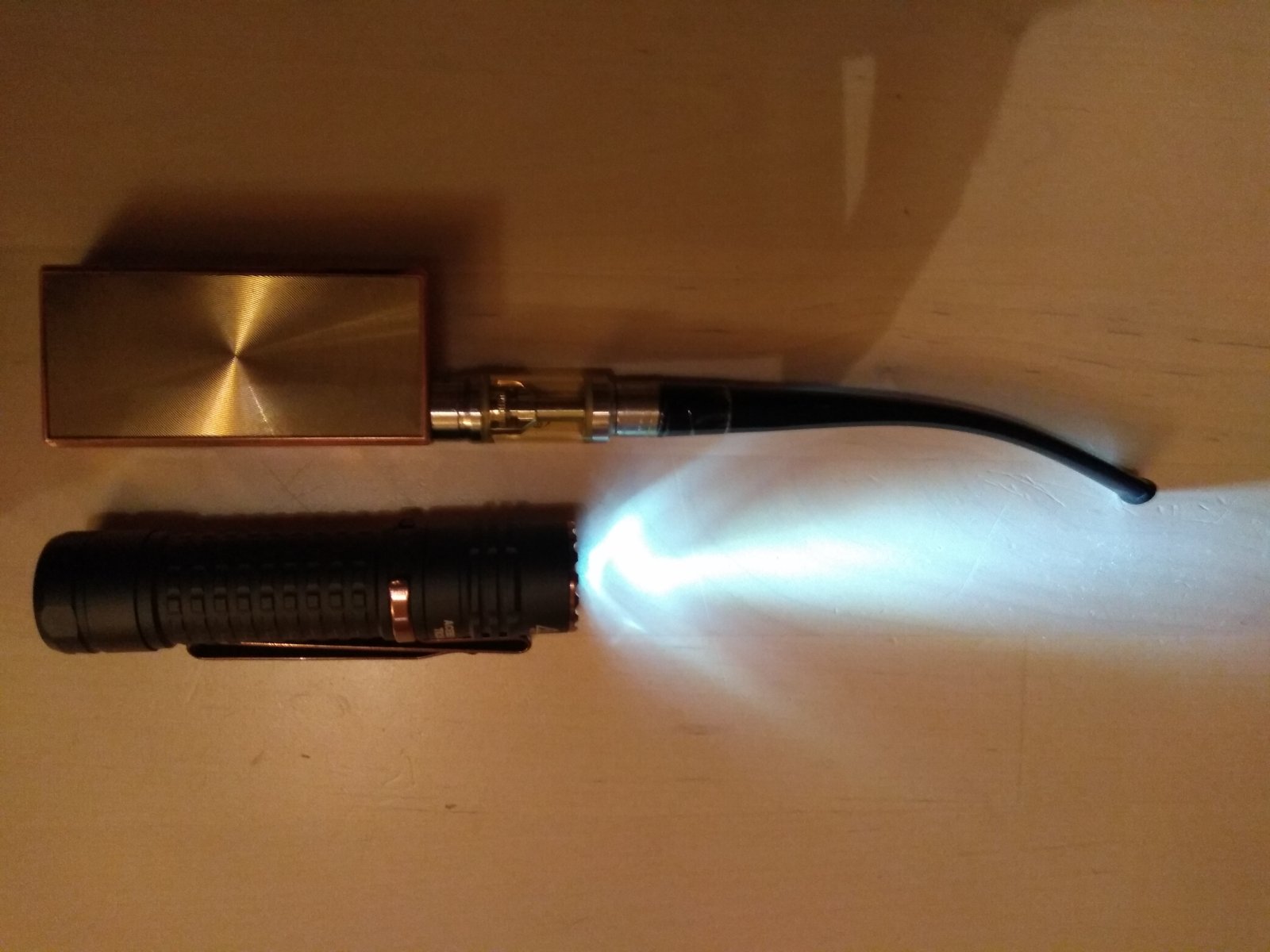 When I was in a vape forum they called those "toodle puffers" slap. When the place began getting bombarded with THC products I walked. Half the people their acted like they needed to go back to smoking. A whole buncha cranky people.

But the toodle puffer crowd knew how to have a nice time and were generaly chill folks. If I remember correct they liked one called Pravarious(?) or similar. I prefer a more modern approach to vaping mainly because old school products like you use are only available at head shops where I live and I prefer not to buy online anymore.

I still use 6 strength Black Note Virginia Tobacco (formerly called Prelude) in a 9 watt device that uses a 1.5 ohm refillable pod tank when I vape. It looks and holds like a carpenter pencil but puffs like a cigarette. It took a whole lot of trial and error to find the one I liked. The juice is a 50/50 vg/pg but I prefer 70/30 or thicker. Yet the flavor is spot on for my tastes. Mrs Fixer is highly allergic to pg and when she vaped took long drags like she was "puffin on a j". Little by little she stopped vaping at all.

I did not realize it was 4 years ago when this thread was started. But by fall that year I had all but stopped both smoking and vaping. By spring the next year I had shaken 35 pounds, told to stop taking colesterol and a bp med too. When covid hit I put back all 35 pounds gone back to smoking 2 packs a day and in between cigarettes was stuffing cake or ice cream in my fattened face. My doctor retired to take care of his mother so I skipped doctor visits during the covid period.

In 2022 the cycle resumes. Back on colesterol and bp meds, with stamina of a 80 year old. The smoking/vaping has been greatly reduced since mid-2021 but not long ago I resumed a weight control regiment and within a few weeks had slimmed enough to tighten my belt a notch. I was the fattest I'd ever been so the belt hole is now my former fattest ever hole. The goal is to be down another belt hole by fall while reducing nicotine intake in half again. Mrs Fixer has noticed an increase in my stamina already.

See, in 2021 I went from a light blue collar worker to a white shirt worker. It was a year ago in June. I vape in meetings at times and people ask "is that thing even turned on?" because I toodle puff. I get some funny looks at times but nobody says "don't you know those things explode" anymore.
Last edited: Jul 1, 2022
R

Think I'm on my fourth Basal. Had to buy the pipe stem separately. It allows me to kind of hold the mod at nipple hight, hand and mod resting against my chest, and sip it like a straw. No arm lifting effort required... It's an elegant mod, for a more civilized age. Perfect for a gentleman of leasure, in the 1920's steampunk alt-future timeline.
A

bykfixer said:
If I remember correct they liked one called Pravarious(?) or similar.
Click to expand...

S
Just got into vape