You are!!! cool, have a black and white version in my cloud shop for £50, £15 or so more than GB but had it with wait times on stuff i want quick.

May still bite, the 200w kanger is tempting too at £45 as my mini kit is gifted away.

Well unfortunately i cant report on these quote-"amazing" flavours as for a mate in work. Similar apparently to the Heisenberg 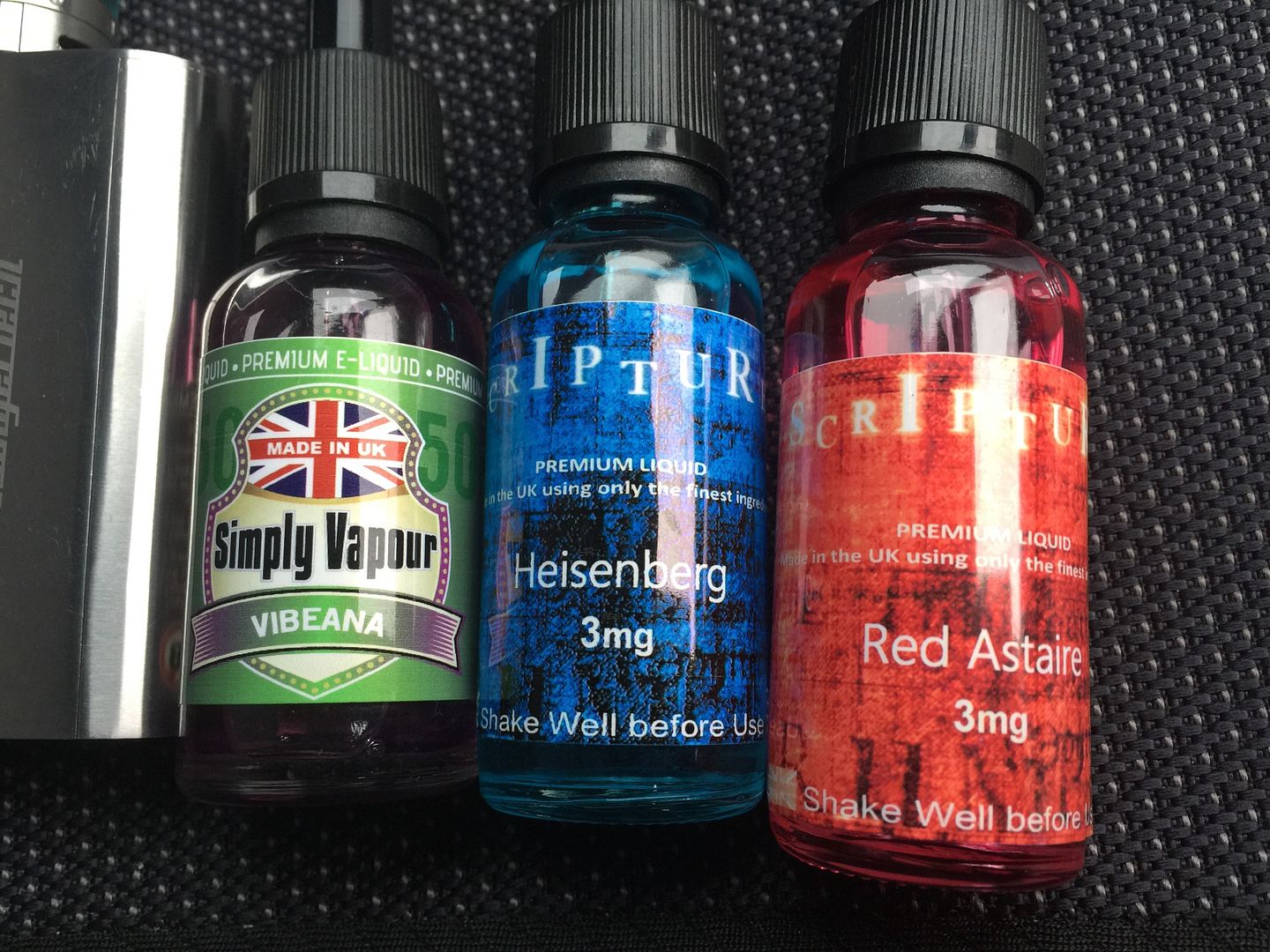 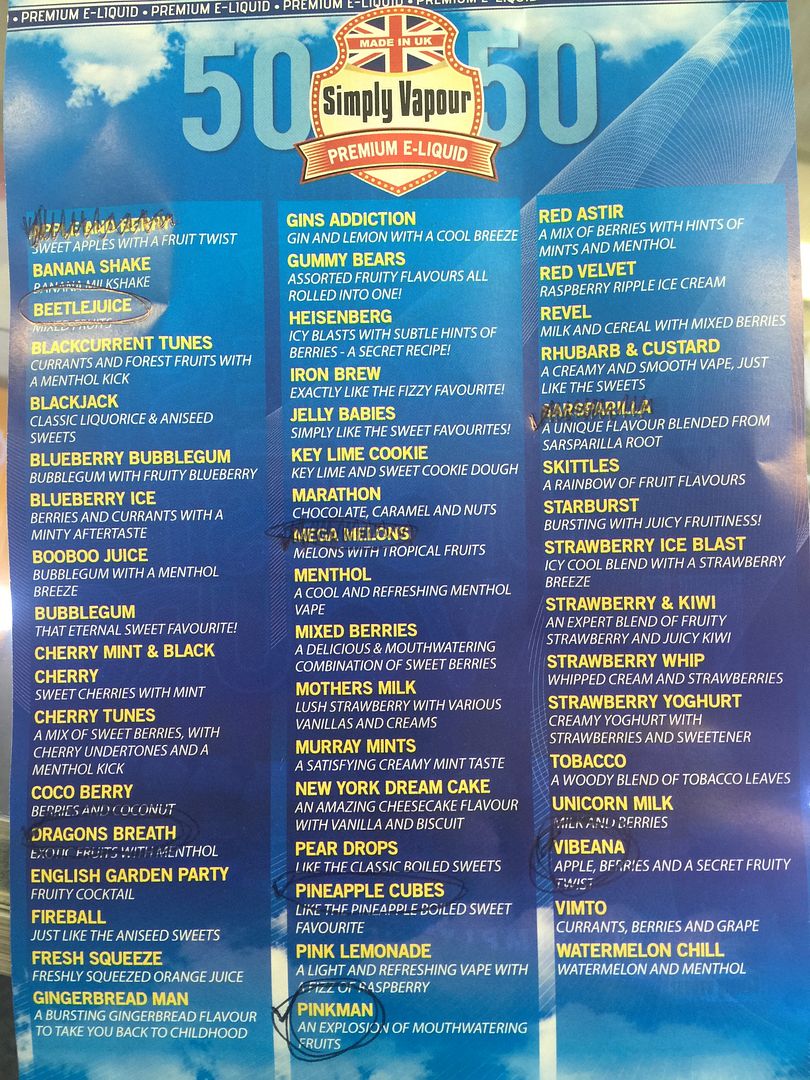 Just saw this subforum and had to post. I started using cpf about two months ago when I started looking for a flashlight for work. Other than sf, I didn't really know any premium flashlight brands. Had an older sf that I loved but only took cr123, which are pretty pricey in my area. I also wanted to switch to led; however, price became a deterrent since I knew it would get beat up at work. Anyway, once I realized that most brands I was interested in weren't sold in any stores, I ended up on cpf to do some research.

Started researching a bit and it finally dawned on me that the 18650 batteries I was using for vaping were also being used in flashlights, obviously not the exact same but 18650 nonetheless. Not sure how i never merged the two in my head before. Now I had a starting point, cuz I already had a nitecore charger and I liked the idea of having rechargeable batteries. My first purchase was a nitecore mh20 for work. Ended up being too bright for what I do indoors but still a great flashlight. Still in search a light for work, but I picked up a highly enjoyable new hobby in the process.

Anyway, sorry for rambling, I'll try and wrap up and tie together in my last paragraph. My other big hobby is vaping, only been into it for about a year. Looking at the pictures on the first page of this thread makes me chuckle cuz it's basically right when I started vaping and it brings back a ton of memories. I can't believe how far this industry has come in a year. When this thread started, I was vaping a kanger emow starter kit that I was afraid was too big, lol. A year later, I'm using a crown tank on an ipv3 li. I really enjoy the hobby aspect of the whole thing and I think flashlights will soon become the same for me. Everyone in both subcultures seems very passionate about it and I really enjoy discussing both with people.

Thanks for letting me share guys, I felt this section was more appropriate than new member intros cuz vaping is what indirectly led me here. I look forward to discussing both with everyone here. As far as vaping, I've been stuck on the crown and ipv3 li for almost 4-5 months now, which is a long time for me considering how much new stuff is coming out. I've yet to find a better tank, although I have been getting some subpar coils lately. The ipv is plain but indestructible so i haven't found anything to make me wanna retire it. I did finally purchase a new tank I'm excited about, the sense herakles plus. I've only had it for a day so nothing to report for a bit til I get more familiar with it. Will the crown ever be pushed off the throne, not sure? Exciting times for both industries, thanks again for indulging me guys

Welcome Soto. Did you start vaping just to Vape or did it help you quit smoking? Just curious.

I know there are more vaping oriented forums out there, but I frequent CPF and I find it nice to have a place to share some vape stuff with a few other like minded people who also share in my flashlight hobby.

+1 to that, it is very cool to have similar interests and info to share.

Oh and on to juice! Think I have found the right concentrate
https://www.vampirevape.co.uk/e-liq...centrates/heisenberg-flavour-concentrate.html

This time a mate tried it and said very similar , maybe a little more blackcurrant and a tad less menthol. But very close and a lot cheaper!
S

Smoked since I was 18, haven't touched a cigarette in over a year! Not worried about ever going back either. I've met a lot of cool people in the past year due to the topic/mutual interest of vaping. It's not like u walk into a gas station and start conversing about cigarettes with ppl, lol.

Have you guys been reading some of this new stuff on ceramic coils coming out? I'm trying to figure out how this is all working but it seems like a porous ceramic material replacing the cotton wick. I'm wondering how this is going to work - definitely a new technology. I love how this hobby keeps evolving - really hope it doesn't get shut down in a a year or two as that would be a shame!

Scored a nice deal on some liquids this week. Moon Mountain Vapor has a Buy One Get One on certain flavors.

I got a 120ml bottle of Summer Solstice (a minty strawberry berry - very yummy) for $50 and they sent another at no charge. They also included a 100 ml bottle of the Max VG line called Martian Mist - peaches and topical mango with a fresh mint leaf twist - at no charge.

That's not bad at all , last 3 I bought(not a regular occurrence) is equivelent to $35 for 90ml !!!! and that was a deal . Needless to say my concentrate is on its way! Hoping it will be waiting for me when I get in.
M

ShineOnYouCrazyDiamond said:
Have you guys been reading some of this new stuff on ceramic coils coming out? I'm trying to figure out how this is all working but it seems like a porous ceramic material replacing the cotton wick. I'm wondering how this is going to work - definitely a new technology. I love how this hobby keeps evolving - really hope it doesn't get shut down in a a year or two as that would be a shame!
Click to expand...

I'm not a vaper myself but I follow developments in it. I wonder what kind of ceramic it is? My mat sci is a little rusty, but if I remember right hydroxyapatite ceramic is very porous. In fact, it's very similar to human bone and has a number of orthopedic and surgical uses.

Missed that post, will have to look into that. Guess that will mean more tanks! :laughing:

Cera Vape SOTER Ceramic Dual Coil - 1.2 ohms
Suitable for the SOTER Sub Ohm Tank System
As the ceramic wick produces no glass fibre or microscopic chips it offers a healthier and safer vape.
The melting point of the ceramic wick is higher than both that of glass fibre and cotton wicks and makes it easier to avoid any burning taste.


Easy Cleaning:
Attach the base with coil head to the device and fire the device to 15-20 watts until you see the coils glow brightly, then blow out any residue. Lastly give the coil head a quick rinse and the wick looks like new again.


Interesting , will check some reviews out first !

I have to say that I am digging the "cleaning" method. Dry fire and glow away - then just reuse!

I think I may have to try one of these out as well.

Wonder how long till Kanger jumps on the bandwagon and we get some Sub-Tank ceramic coils.

I am hoping it's just a coil thing and no need for extra tanks. Probably not log knowing kanger and smok, providing they are as good as they seem.

Will hold out a little on this , see what happens with the "market" as things soon get improved !

Yeah - I'm going to hold out a bit as well and see how things develop.

In the meantime I just went to order some Kanger SubTank coils and found they now have authentic KangerTech clapton coils at 0.5 Ohms. Ordered up a few to try out.

If you think ceramic is a cool idea check out this one:

Interesting , like the idea of never buying coils again, saying that it's not far off that these days now. Not over struck on the price and tank design is a little bland. Price is a little steep too ,as my v3 equivelent to $35, running it for a year would not be over a total(inc tank) $50 with coils and wicks. Down side I can see is the ohms, right now we can tweak our coils for the desired ohm. If I want a 0.2 or 0.8ohk build I can change my vape, looks a set ohm. If it's a nice vape though who cares!!
Unsure , maybe the perfect tank for people who don't want all the fuss , don't get bored easy etc. I kind of look forward to new tanks and also helps keep the interest in vaping . Can see pros and cons with it, maybe a good work option where messing with replacement coils is not always user friendly and if proved so, reliability is needed when away from tools/jigs/replacements.

Will check vid out later when I get home.

Saturday at 3:46 AM
AstroTurf
A
E
What is a good beginner vape?