What is old is new again.

See, early vape devices were very portable like a cigarette. Yet they sucked. So badly it's a wonder the vaping idea didn't go the way of the hoola-hoop.

Now if the hoola-hoop gave the user a jolt of addictive nicotine every whirl perhaps us smokers would all be standing outside in the smoking area twirling hool-hoops in all kinds of ways. Hoola-hipsters, hool-crumudgens and stealth hoola-hooping in the public restroom.

So the vaping industry did not die in the early days. It actually exploded onto the scene like an atomic bomb. (To quote George Jong from the movie "Blow". I always wondered why it was called blow and not sniff. Afterall the last thing a coke addict would do is blow on a pile of the evil powder.)

I'm waiting on a triple a minimag sized one with the modern capabilities. It's out there too but they've yet to reach the US. Joyetech is re-releasing an updated "e-roll" I cannot wait to try. Add a minimag pocket clip and I'll be set.

Now for the purist who like big output or "squonk" a puff the pod is not for them. If mpg is not an issue where a gallon of e-juice is a months supply there's the DIY way. But for many who just want convenience and don't enjoy twisting tiny wire to a perfect spring shape or notice a difference in a few microns of cotton wick length in one direction or other the pod system is a bounty.

In the 70's when I was a kid the smoking industry was forever changed with the advent of the disposable lighter. My parents used Zippos until the Scripto came along. My pop used his Zippo until the 1990's. Same one too. My mom on the other hand preferred not to have that lighter fluid aroma woft out of her daily purse where the Zippo was far from leak proof. At 16 I had my first Zippo. After it leaked a few times in my pants pocket the novelty quickly wore off. By then BiC had dominated the market and the less than reliable Scripto was seen as a non-issue. The BiC was just better.

By the 1980's the disposable lighter was here forever. Matches? Anybody remember those things? Ask the checkout clerk where you buy your cigarettes "can I get a book of matches with those please?" And the look you get from some is like they're saying "matches? whatthehell are you talking about?"

The purist still use Zippos. They look really cool in war movies or when used by the hipster in a modern horror flick. The modular system is the 2 litre Pepsi bottle versus a 12oz can. Lots of advantages no doubt. Pods are not for everybody that part is certain. But now folks wanting to stop smoking with a nicotine vape device or like to sneak a puff in an office or elevator have a good alternative to larger gear.

So the vape pod is either about to be or has become the disposable lighter of the new millenium. Most vapers I know use one in one form or another. The miniature 'mod-pod' is a viable alternative as well. Most vape shops I visit now have a worker carrying a mod-pod around their neck from a lanyard. Many say using a pod system requires using mega dose nicotine strength (called salt nic). Well yeah if 12 drags from a vape mod empties your 4 ml tank then of course the much less productive vape production would require more nic per puff. But for the rest of us regular strength nic juice is just dandy.

I went a step further and found a pocket clip from a flashlight to shirt clip my favorite aa battery style pod device. Carrying anything around my neck besides a shirt collar is out. Clipping a double a battery to said shirt collar or pocket is very convenient. Carrying an inkpen that way for decades made it seem natural right away. 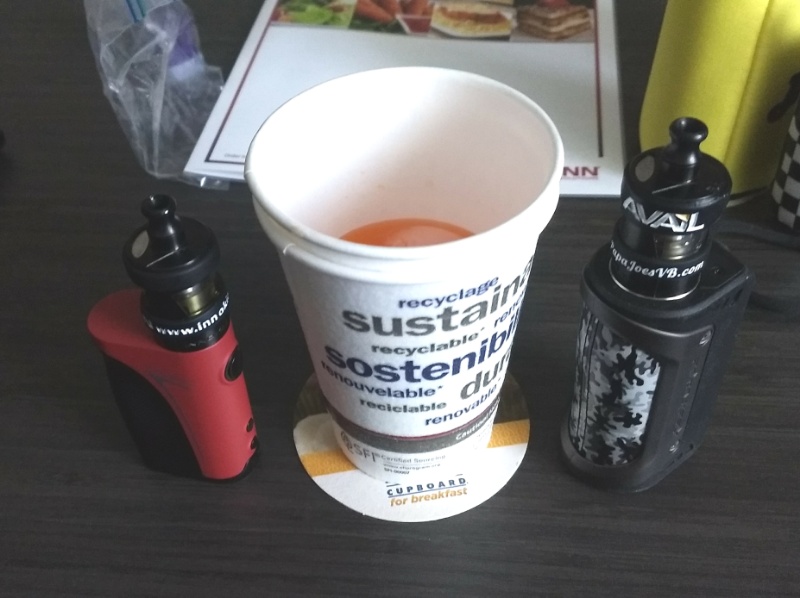 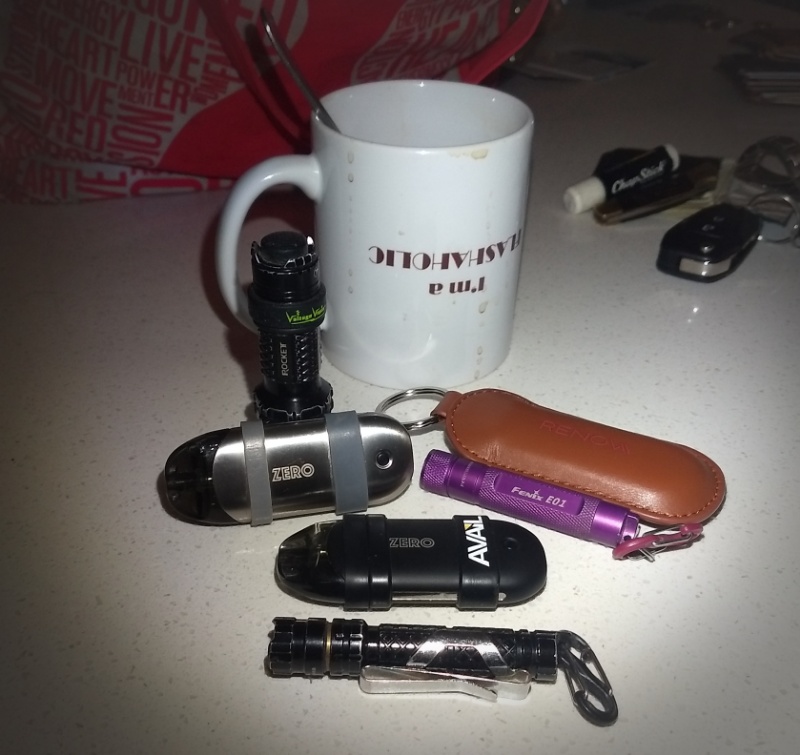 I'm all in on the BiC lighter of vaping. 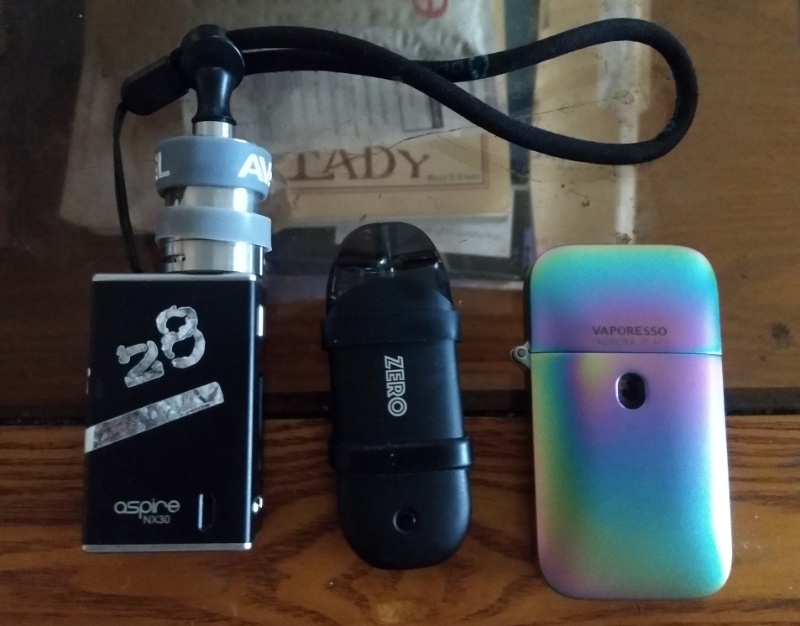 My variety of pods has the full sized gear stashed away somewhere. 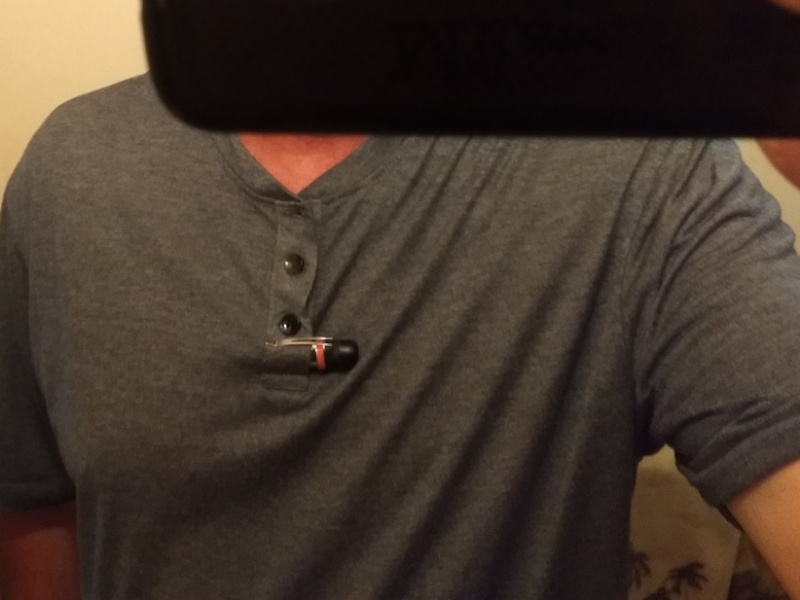 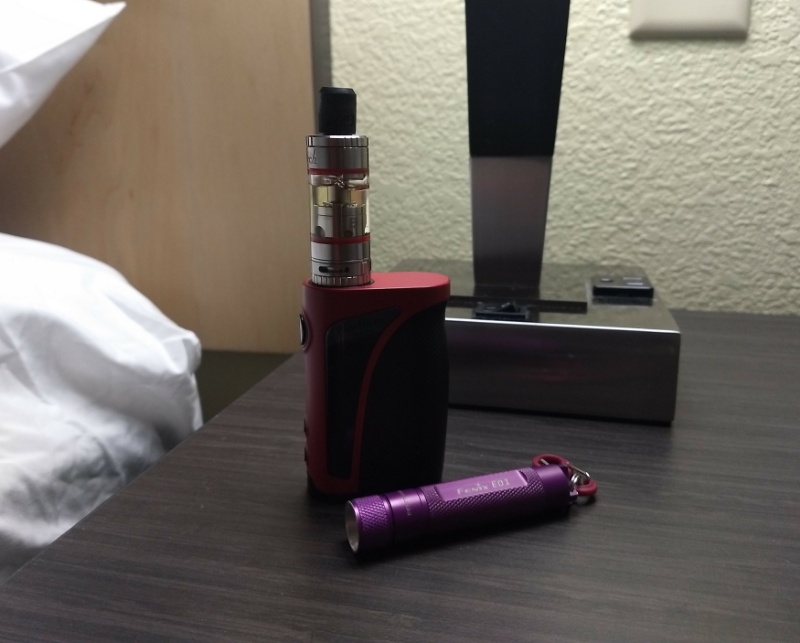 Modular versus a Fenix E01. 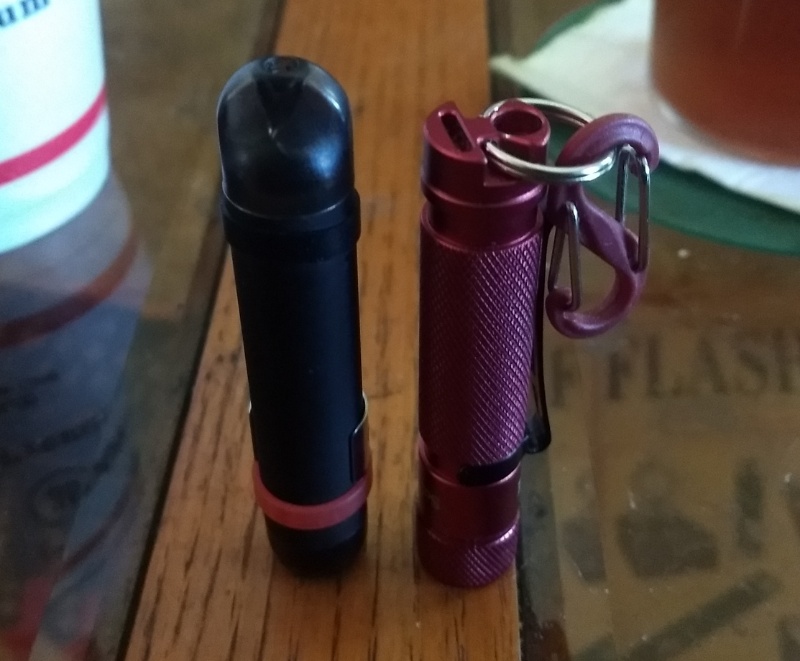 That's much better for the smoker trying to quit and wants to try vaping instead.

Folks over at a famous vape forum scoff at the notion of a pod system as a viable alternative. I said "well the CD is replaced by MP3 and the Zippo by the BiC".
I heard crickets chirping.
Last edited: Jun 23, 2019

Researchers do know that e-cigarette aerosol contains toxic chemicals like those found in glue and paint. What’s less clear is if the amounts are high enough to cause diseases like cancer.

?? Aerosol?? What info and proof please. Ingredients in my vape juice has vg/pg/nicotine(very low amount). All actually found in food(inc nic )

I digress, great read as always mr fixer, so tempted on the zippo like pod. Just bought the aegis solo(single 18650 and usb). So kind of need to get my $ worth yet haha. Feels tiny compared to the bigger brother 26650 we both have. Much lighter and more pocket friendly, but not as natural in hand I find.

I think pod systems are definitely more than just a trend at this point. People want viable options for the pocket, something lightweight and easy to carry.

I already have too much in my pockets, so a small pod system is definitely a nice thing and most importantly it keeps a pack of smokes from occupying space in there

Yep, pods will be around for a while Pete.


Ven, my brother has all three Aegis like you. At one point his wife was fussing at him about his house smelling of cocoa puffs cereal all the time. When he switched over to a pod she stopped complaining. When he comes to visit my house I no longer say "dude, seriously" due his massive clouds. 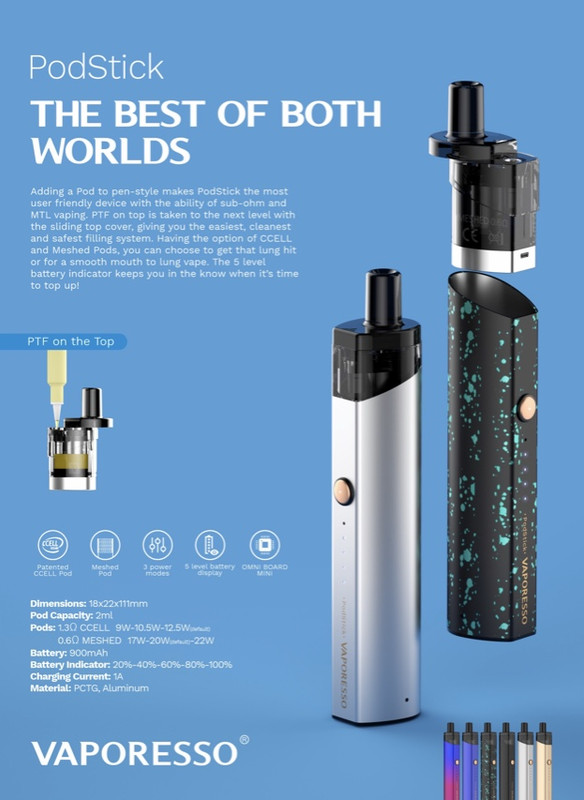 Vaporesso has asked me to test one of these.
Stay tuned.……

Cigarette free for about 9 months now.

Pod systems played a big role in that; small, easy to carry and simple to use. 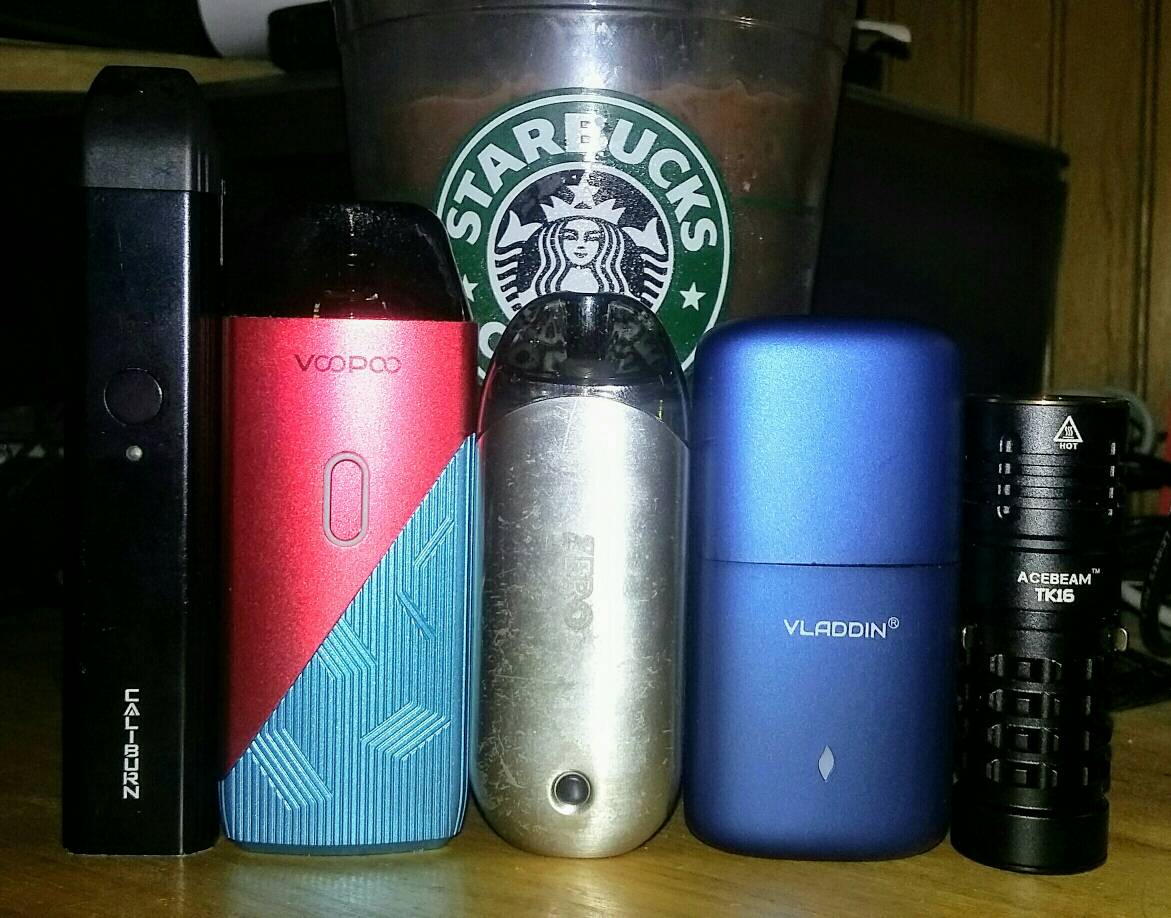 You got an Eden? Nice. I've been thinking of trying one since it uses the same cartridges as my daily device is the RE.
Last edited: Sep 14, 2019

bykfixer said:
You got an Eden? Nice. I've been thinking of trying one since it uses the same cartridges as my daily devive the RE.
Click to expand...

Yes the Eden is pretty good, I like the form factor better than the RE, but same pods either way. Dust cover is a nice touch. Draw is a tad tighter than I like but good device nonetheless.

Ordered a white one and some extra pods.

White Eden arrived today. Won't replace my RE while driving due to needing two hands to remove/replace the cap. But it will definitely not collect dust.

bykfixer said:
White Eden arrived today. Won't replace my RE while driving due to needing two hands to remove/replace the cap. But it will definitely not collect dust.
Click to expand...

Yeah, it would have been nice if the cover was hinged or something. Not ideal for driving but otherwise it's decent. It's cool the pods are interchangeable with their other system but I have enough pods.

I might pick up a Voopoo mod so can at least use the same coils on it as well as the pod, which is pretty decent.

Well dang...after 9 months of pretty heavy use my Renova Zero has died. Maybe not totally dead but it's blinking and not firing consistently. Not sure if it's the auto draw sensor or the battery...so the Vladdin Eden has now become my daily pocket vape. Although I do prefer the Zero a lot more, but the Eden is decent nonetheless.

I tried a less conventional pod recently too - the Usonicig Zip. It apparently lacks a coil and uses some sort of ultrasonic vibration to vaporize the e-juice. It's an interesting idea but it fires really slowly and is more of a cooler temperature vape. I didn't care much for it but it would work in a pinch.

I'm trying again to coax my wife into quitting smoking so I ordered her a Voopoo Vinci that I will inevitably try when it comes.

Last but not least, I've been meaning to get an actual mod for at home and picked up a Innokin Proton Mini . Definitely excited to try this thing out once the new e-juice arrives in the mail!

After a year my favorite vape pod system quit suddenly. The Vladdin RE. And like with a lot of electronic gadgets it is no longer being made. The prepper in me said "oh no you only have 2 backups" so I found two more and they were clearance priced so yeah……I'm good for a while longer.

My state went up on tobacco tax again so cigarettes have gotten beyond $50 a carton for the cheap ones.

P
This is why I never made anything for vaping