What light(s) is in your pocket today?

This copper beauty built from copper tube by a fellow member. 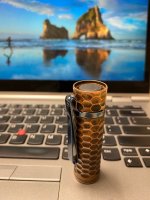 Sipping coffee in the back yard with a Surefire EDCL2-T & Pelican L1 1130.

Edit: I have the bug light on too zapping mosquitoes.

Fenix TK16 V2.0 in holster and Surefire Titan on keyring.

Most of the time, its my old and reliable Zebralight SC63w 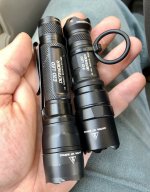 A 115 lumen Streamlight Protac 1AAA. I have the earlier 70 lumen version, too. 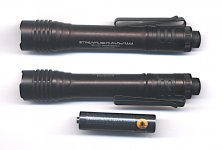 Nothing much going on today. The most I could need a light for is to step out of my apartment before the staircase light (that operates on a motion sensor) turns on. For this kind of mundanity, a Lumintop EDC01 suffices.
3

Dropped my old friend a Fenix LD10r5 in my pocket today. Couple of quick stops & PT on tap during daytime hours so light n low profile covers the bases.

Weather here during daytime is 34ºC+ and humidity is very low, so I went out in shorts today. I carry all my stuff in pockets, so there's not much room for a light; as such, I eschewed 18650s for once and went with a Lumintop Tool AA w/14500.

Some detail would be cool. That's a sweet looking light. 👍
C

I have replaced my Fenix E18r with a sofirn sc21 for general edc, largely because when the sc21 is locked out the button works as momentary firefly. Very handy for around the house without having to keep unlocking and locking out everytime you need a little light for a few seconds here and there.

Lumintop Tool AAA. I carry a spare AAA battery with it.

As you can probably see, I like things that last forever (or at least a very long time).
I have also carried a Goruck GR1 daily since 2018, which holds my most important EDC item which is my BPA free water bottle that I've used daily for over 10 years (eco friendly, and I've saved so much money never having to buy a drink when out, ever).


First thing I do after getting home is wipe down my phone with alcohol, been doing this everyday for over 10 years. So if anything looks wet, it is, as I usually also wash my EDC lights with soap everyday (even before Covid). For sure if I used them during the day.
Good habits to get into I'd say, as millions of people world wide also started doing the same and wiping down their phones daily about 18 months ago. lol

scout24 said:
Some detail would be cool. That's a sweet looking light
Click to expand...

Sure Scout. Still in my pocket today.

This came to me from Pinkpanda a couple of months ago.
He built it from a piece of copper pipe. The process is described in a thread on BLF. Below are some pictures from the thread showing the process.

Today I had my old but still great V11R Mirage (in CR123A format) and the D25A MkII in my pockets. 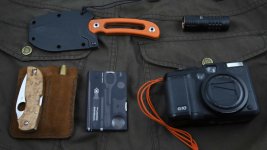 S
whats in YOUR pocket? (flashlight wise, that is)
2 3