What was the last LED light you purchased and why?

OttaMattaPia said:
Convoy L6
With over 4000 lumen, the perfect batteries, price and function, the search stopped there.
There simply was no need to look for anything more.
Click to expand...

A few years back, I wanted to get a L6, but it was unobtainable.
I'm glad that you got one and are happy with it.

Like you, my search, for bigger and better lights, is pretty much over.
I really enjoyed the ride though.

A couple of Olight S Mini Batons, because I like the knurling, and they are Shiny!.. lol 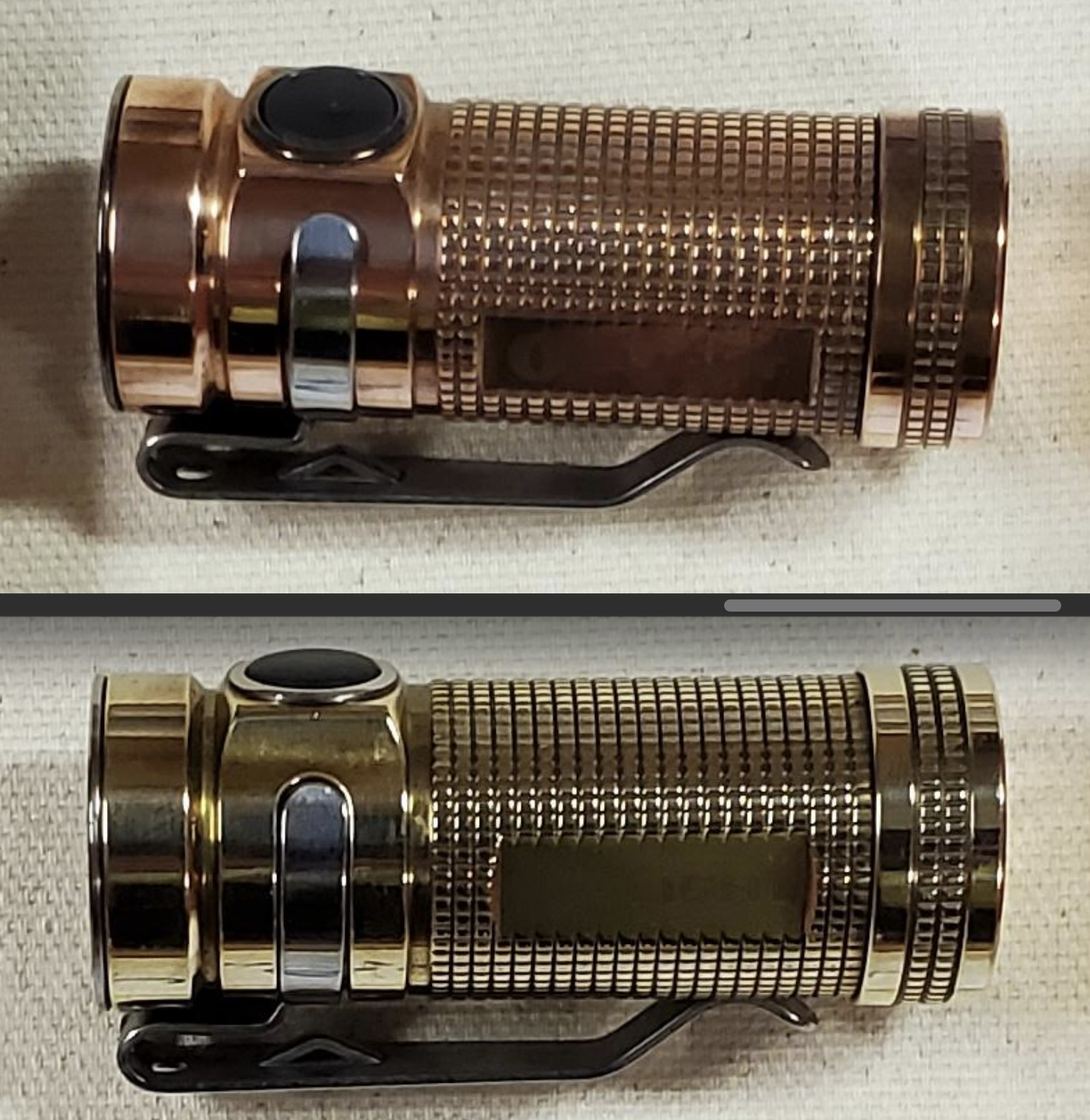 Lumintop D1 for all round usefulness and locateability .
D

I just bought a black Olight i3e EOS. I was able to get in on the version (green with snowflakes) that they gave away for Christmas. My Wife liked it and subsequently claimed it for herself. I have been carrying either a Maglite LED Solitaire or a Peak LED Solutions Eiger but this little Olight is brighter and smaller. I added a Hangman's Knot to give myself something to grab onto so I can operate it one handed. It is a great little light.

Certainly not the last, rather the most recent...Fenix UC35 v2. It's my decennial flashlight upgrade year. Why? Tail click, side mode button, 18650, 1 lum moonlight, 1k lum high mode...pretty standard fare these days, but all new to me. Pretty much what I was hoping for in a new EDC light been fulfilled by the UC35 v2.
I been using 6Ps and G2Zs since like 2007, so yep, all new to me.
P

A couple of Malkoff M61 drop-in modules, this year. Why? They're Malkoffs ... bright, effective, and nearly indestructible.

Along with swapping out my old AW 18650 cells for a new batch of Panasonic NCR18650B protected cells. Back to as-new performance, given the fresh cells. Longer-lasting power, too, with the 3400mAh 5A spec. 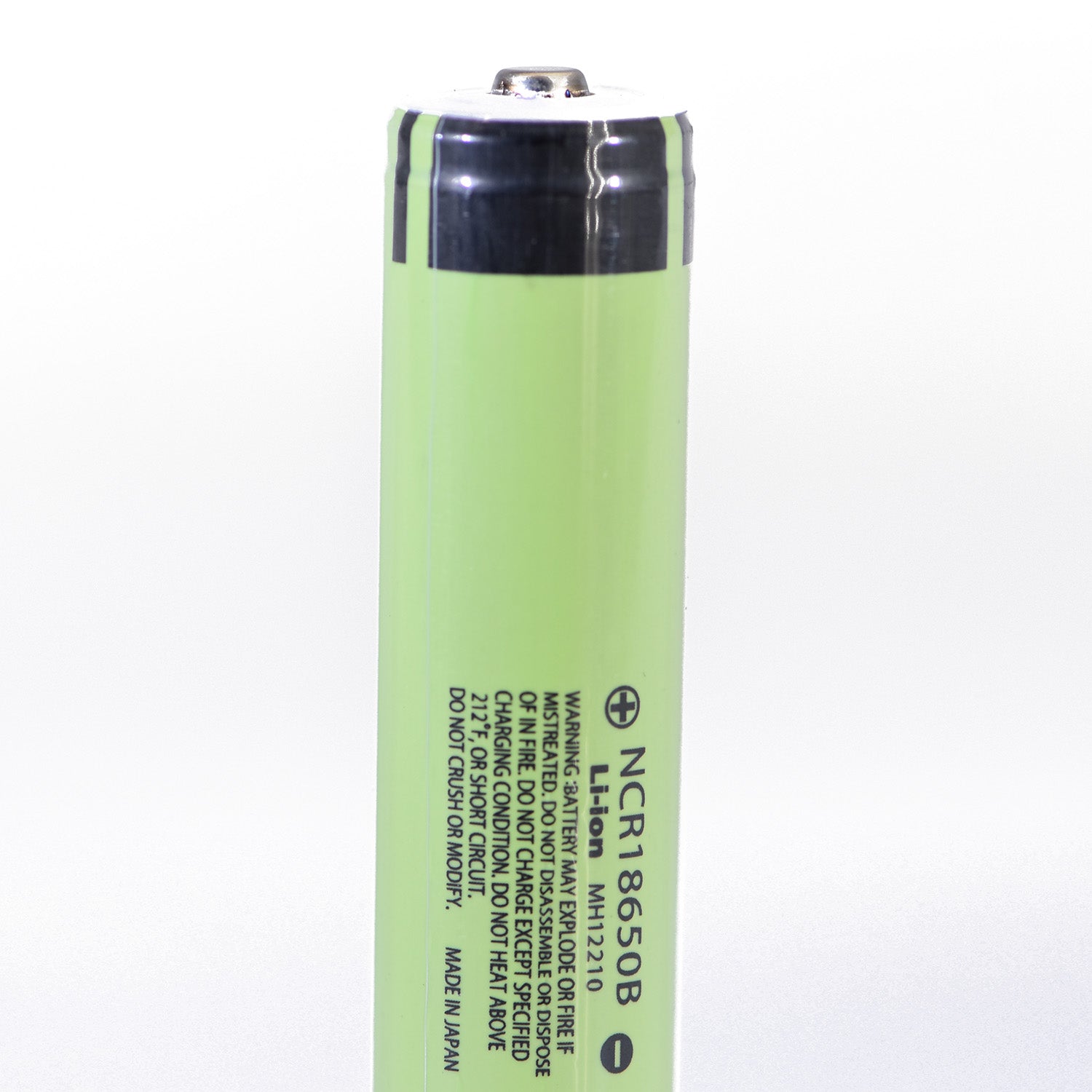 We offer the lowest prices on original Panasonic 18650 Protected NCR18650B Button top batteries. The Panasonic 18650 battery is considered one of the best protected 18650 batteries available on the market today . Please note this is a PROTECTED (PCB) 18650 Panasonic Battery. The PCB is a safety... This is the Malkoff Devices P60 style Multi-Mode Drop-in LED Upgrade Conversion with solid brass heatsink construction. The output on high is 450 out the front lumens. The design utilizes a custom orange peel reflector designed by Don McLeish. The reflector offers a very nice balance between...

CaNo said:
We are Flashaholics. Let's face it, out of all our lights, we will really only use a maximum of 3 of them, and the rest will just collect dust. Why do we add to our collection? Are we bored? Want to out-do the co-worker? Are we explorers? Do you feel you have to catch up with today's current bulb? Or do we just need a new toy?

I'll start and say the last flashlight I had purchased was the Ra Twisty 85-TR. I love the quality that Ra offers. I purchased the light because of the red low. Also for the durability. But the main reason I jumped on this light is because it is discontinued, and I do not want to say "what if" in the future. This light would classify as one of my toys, but a very dependable toy at that. Whether I need to use it as a kubaton or use it as a backup to my QAA on 14500.

What is your reason? Excuse? lol
Click to expand...

Trunight catapult v6 and v5mini for the size the mini is a great thrower. the ui is similar to the full size version. I use moon often and it is easy to get into w/o any turbo accidents. moon is bright enough for most night in house walking around, with dark adpated eyes. both catapults will light up my city sized back yard easilyturbo will locate raccoons and other vermin in my yard. both use common rechargable lithium recharge batteries. and have impressive run times on moon and low. now my 2 EDCs have the same simple UI. they are both great throwers. price is a good match to their build qualityI have 3 that use 26650s and 2 that use the s 18350s. some many great flash lights today.
L

I've been drifting in and out of Flashaholism since 2008

and, lately, I've seen a bit of a withdrawal. I picked up the following the last little while:
- 3 x Olight Obulbs (for general area lighting which I happen to use this evening as we had a blackout)
- Olight RN1500 (Needed a brighter biking light than the older NiteRider 600lmn light I previously used)
- Also picked up a few JetBeam 3Ms' (they were on sale and I gifted two to my buddies and kept one as a beater nightstand light as it has 2000 lmn output, runs off 21700 so can be used a (slow) powerbank in a pinch)

Now looking to see if I can pick up a light with one of the Nichia 519A emitters and / or another Vinh modded light.

Going back over this one was fun to see how when it started "250 lumens woohoo!!!" Now it's "2000 lumens wohoo".
What was amazing was how many popular ones back then (2009) are still popular today.

The last one was Zebra SC52w (2013?), mainly because of the price of $25 and it was just interesting to see. As it turned out, the 0.01 lm mode is completely useless. It seems that they indicated the lumens on the LED, and not OTF, and the warm LED had even fewer lumens? Or from old age, all levels have become less than they should be. It's more like 0.005 lm

desert.snake said:
The last one was Zebra SC52w (2013?), mainly because of the price of $25 and it was just interesting to see. As it turned out, the 0.01 lm mode is completely useless. It seems that they indicated the lumens on the LED, and not OTF, and the warm LED had even fewer lumens? Or from old age, all levels have become less than they should be. It's more like 0.005 lm
Click to expand...

More than just a few years back there were many ZL lovers, and some ZL detractors. There were the LONG run-time lovers, and the detractors stated that ZL over-rated their output.

Personally, I do not care for sub lumen settings in a flashlight.

Poppy said:
More than just a few years back there were many ZL lovers, and some ZL detractors. There were the LONG run-time lovers, and the detractors stated that ZL over-rated their output.

Personally, I do not care for sub lumen settings in a flashlight.
Click to expand...

This is my second zebra, the first one was given to me by a friend, so I'm not in any camp. I love sub lumens and long run times, but there's too little light to be useful. Perhaps because of this, I do not see such small declared levels in modern zebras. So far, the most useful of the low-mode flashlights is Malkoff MDC AA.

bykfixer said:
Going back over this one was fun to see how when it started "250 lumens woohoo!!!" Now it's "2000 lumens wohoo".
What was amazing was how many popular ones back then (2009) are still popular today.
Click to expand...

Ironically, couple of hours ago, unwrapped my 4400 lumens Klarus running on a 21700 rechargeable.

Told myself I'd never again order from nealsgadgets, well...
Got shipping conformation on a Amutorch XT45 NB90.16
Bought it for the NB90.16 emitter, which has no specs other than it's 16-core & can do 10K lumens,, gotta test that
Has a variable output mode also.
$50 shipped 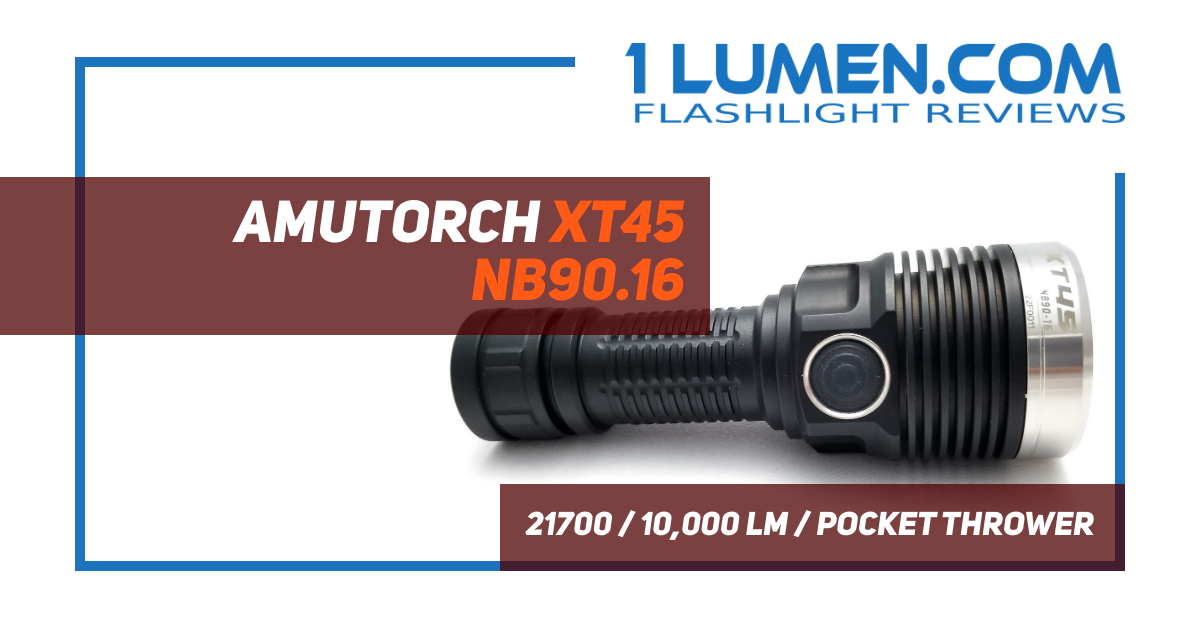 The Amutorch XT45 NB90.16 is well-built and solid with good machining, high current spring in the tail, and a decent switch. The performance is pretty incredible for such a small flashlight.

Mine was the Nitecore TM28. Before this I owned a few LEDLENSER torches (I still have one and its a great little torch, the others I have passed on to my girlfriend, family).

The reason I got the TM28 was I was wanting something with a lot of punch, but at the same time, be able to fit in my jacket pocket (which the TM28 does) and if I'm planning on been out for a while and or I plan on using the 6000 lumens quite a lot, I can still fit a battery storage case containing four spare 18650's in my other pocket to give me extra use. The reason I wanted something with a bit of punch is, me and my girlfriend like to go out walking after dark, along our local river, which is fairly rural and we can see lots of different wildlife after dark, over the other side of the river where the woods and fields are. With the other torches I had, I didn't have enough distance with the beam, to light that area up, which usually resulted in seeing a reflection of the animals eyes, but not enough to identify it.

The TM28 allows me to see this area (and then a hell of a lot more when I put the TM28 on 6000 lumens) with ease, and we have real enjoyment seeing the animals over there, that we would otherwise not be able to see.
L

Nitecore i4000.
...and I nearly forgot: I got it for almost half the original RRP!

The only thing that it is missing is a shortcut to ultralow (would have been really nice) and a tailcap for tailstanding (not as important).
Last edited: Jan 10, 2023
B

Zebralight SC5c Mk II LE AA Flashlight Neutral White High CRI Limited Edition. Why? Because I really like Zebralight and have many eneloops lying around. With its tight fitting screw on pocket clip it slips into the coin pocket on a pair of jeans and you don't even know it's there.
J

My most recent purchase is another Sofirn SC21 Pro, because I sold all the others I had. Im a fan of the SC21 Pro because it has Anduril 2 UI, which I find extremely versatile and full featured. Plus the SC21 Pro has a tailmagnet, built in charging, illuminated button, and it is moddable to Nichia. Shown here modded to sw45k w a Pebbled Tir lens: 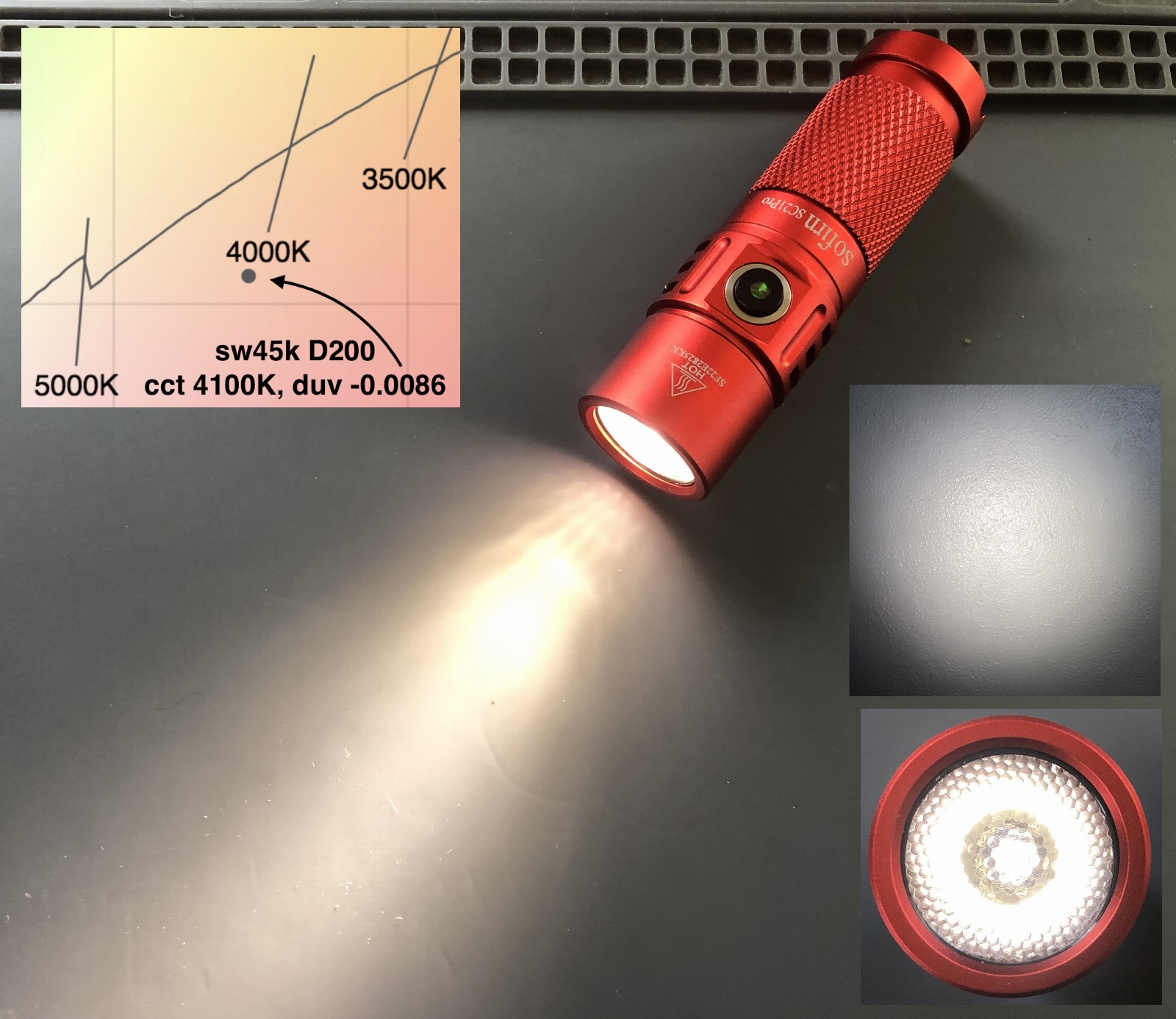 Thrunite Archer 2A: Light won't stay on And what are some larger Alternatives??