Zombies?? They're mostly chilled out.
Is it still appropriate to call them stoners or is there a new term that isn't offensive.

"Zombies" is a term some preppers and others use to denote an enemy that can be eliminated guilt-free. That is, not really human so ok to dispatch without prejudice. For some it is a cloak to describe what they are doing to become more lethal against potentially threatening humans. The discussion would probably include fortification against those who are after one's stuff.

If you're ready for zombies you're ready for anything as I've come across more than a few times. Of course zombies is a more acceptable term than TEOTWAWKI (the end of the world as we know it) and its other generally less savory variants.

There's a certain romanticism to planning for zombies in that there are a heck of a lot of corner cases that you need to plan for - most of which are not the kind of fare that makes it into gripping fiction around zombies. Exciting things like repelling the zombie hordes, dealing with the possibility of a member of the party being infected, and fighting bandits are given much screen time/wordcount while the grim realities of needing to cover the basics of survival - long term food/water/shelter/clothing/basic security - are handwaved or given relatively little coverage.

Bragg Apple Cider Vinegar. 2 teaspoons twice daily with small glass of water. DO Not DRINK RAW! Not only is it healthy for you it also helps with weight loss and helps keep it off depending on your diet. Definitely worth taking!

Yes for considering scenarios and preparing for them, including the mundane basics.

The late Sub_Umbra's thread An Emergency Water Epiphany goes into some detail. His post history is worth looking over - at some point he detailed living through Katrina sheltering in place.

I did read his entire thread, and having grown up north of New Orleans appreciated his work. Perhaps someone will summarize his experience and practice. I think there are other factors with other situations that deserve discussion.

KITROBASKIN said:
Yes for considering scenarios and preparing for them, including the mundane basics.

I'm guessing the old ways are going to be employed.
Though while things are going well, few folks will be actively constructing Outhouses on their property.

idleprocess said:
The late Sub_Umbra's thread An Emergency Water Epiphany goes into some detail. His post history is worth looking over - at some point he detailed living through Katrina sheltering in place.
Click to expand...

Every once in a while (I guess every couple of years) I re-read his thread. It's a good primer for me to make sure I have many of my preps in order. One of the take-aways was to be prepared for insect infestation, and flies.

scout24 said:
Spent part of the afternoon digging a small trench about 100' long from the underside of my deck out to Mrs. Scout's garden. Going to bury a garden hose for plant watering so I don't hit it with the mower and have to repair it again...
Click to expand...

My prep today is to go through this thread to get me motivated to do some preps I may have missed.

@scout24
I am wondering how well putting a garden hose under ground worked out for you. I used to have a underground sprinkler system at a previous house, and although I paid a professional to blow the system out with air each year, pretty much each year he had to return to repair places where the hose froze and split.

One year, we had a sudden freeze, and I hadn't called him soon enough, and I had to blow it out myself. I then used a gallon or so of RV antifreeze, and pumped it into the system, and then blew that out. I then added another gallon, and left it.
In the following five years or so, I only had one split. A huge improvement.

Romanko said:
Greetings from Kyiv. This is the backpack I have, 50 litres. I still hope there wont be need for evacuation. I've got lots of flashlights, but the main problem is that our family got no car.

@Romanko
You wrote this on Feb 24, 2022, and day that will go down in infamy.
Are you still in Kyiv?
Are you comfortable to share your experiences?

Poppy- Knock on wood, I've had no problems with my buried hose since doing it. Working up to expectations.

My prep for today was go to bed 2 hours early last night. That extra sleep was for mental rest as much as physical rest.
Gotta get those zzzzzzz's in for mental health as well.

Did some cardio with my cardio this morning- Ran my first half marathon. A bit of endurance while moving may come in handy, and being in ok shape is never a bad thing. 👍

One day at the office I had to visit as I entered the building a coworker who has me by some 20 years says as he went toward the stairs and I the elevator "you don't use the stairs?"…… I did not respond and entered the elevator. We met again at the top of the stairs and I replied "I have about 25,000 steps left on these knees and I'm saving them for when my @$$ is on fire or a bear is chasing me"…

I commend you Scout for taking on that challenge. Way to go!!

I used to walk some 10-15 miles a day at work walking beside a paver train. Often at night. Grab ticket from truck driver, write stuff on ticket, put ticket on clipboard on the paver machine. Park your truck a half mile past the paver. Walk beside paver until half mile past truck. Go get truck. Repeat. On the way to get the truck walk with the rollers for a time to ensure they roll it correctly. They pave 3 miles, I've walked 6. Then repeat with the pavement stripers who follow the paver to ensure they placed it correct. (dam I'm tired just reading that.)

Hence my comment to that older gentleman who has had an office job since high school. Yet he once weighed over 300 pounds and is now a svelt 155 so I commend him too.
Last edited: May 22, 2022

Looks like monsoon season has come earlier than usual, but our drought looms over us all; trees are dying, some of the big ones.

Months have gone into planning for evacuation because of wildfire, and still not dialed in. I believe we have the three dogs and two rabbits evac. plan in better shape now. Yesterday I cut 16 foot utility panels into easier to handle units, and prowled around the homestead for suitable connectors. This is so after we flee, we can make an encampment away from the flames and keep the bowsers contained. 22 second video. Let me know if anyone saw before the camera went to it. You may need to click the play icon far upper right for sound: 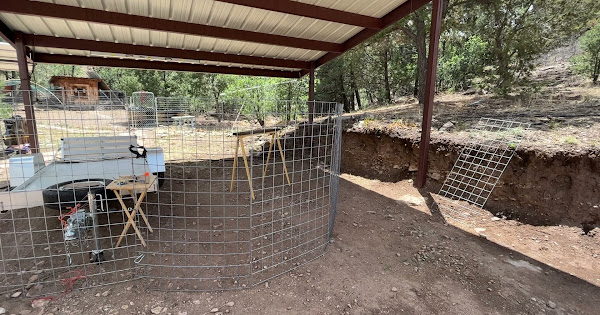 Cut utility panels from Tractor Supply are coupled into pairs for transport. I think they are made in Oklahoma.
Any ideas on what kind of tie-downs to attach cargo boxes? I have a couple ratchet straps that can go completely under and around the trailer, and if the panels are secured, one could use the panel wires themselves as hold-downs for other straps. Just wondering if members here have found some nifty strap systems. 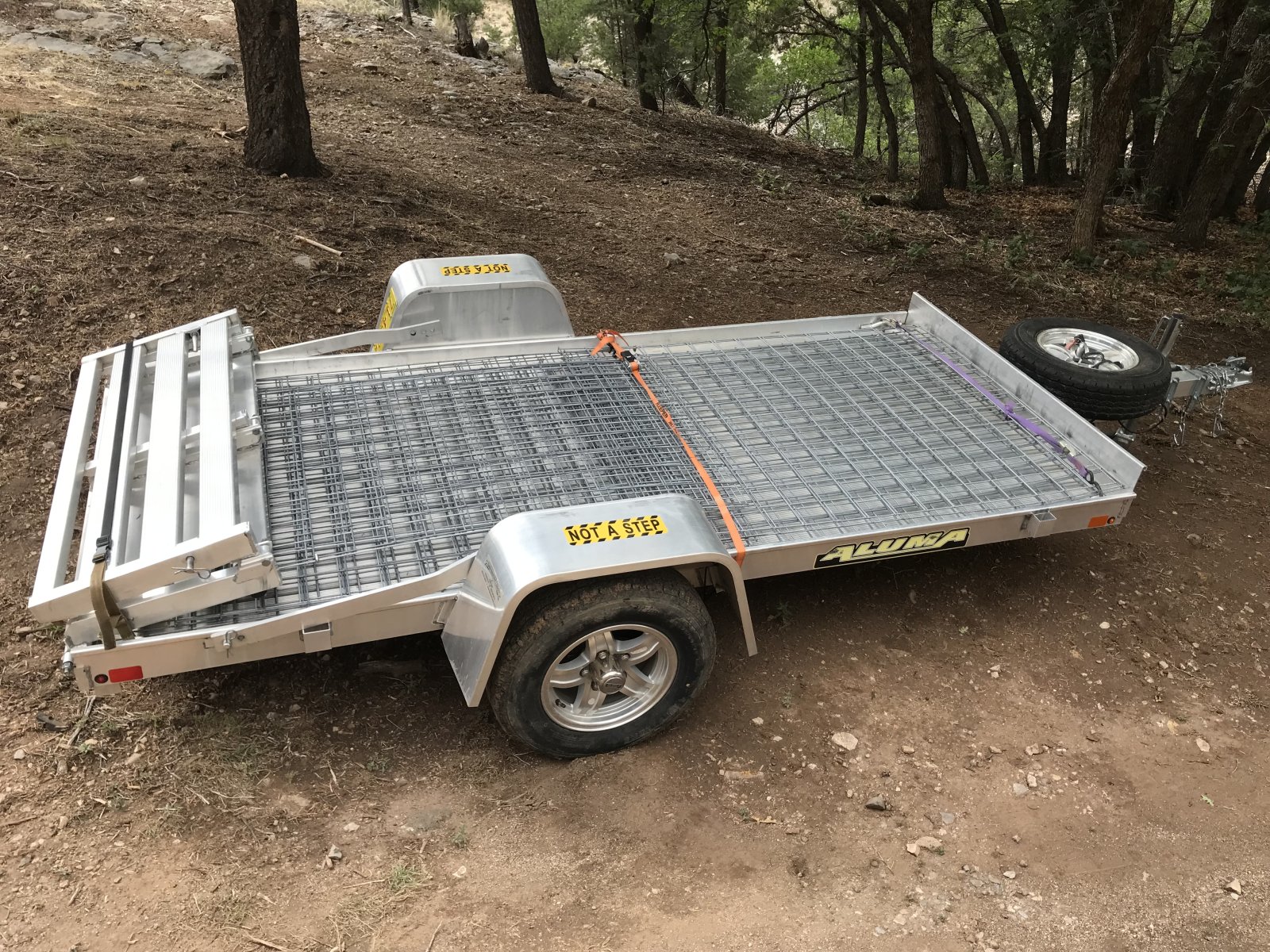 KITROBASKIN said:
Cut utility panels from Tractor Supply are coupled into pairs for transport. I think they are made in Oklahoma.
Any ideas on what kind of tie-downs to attach cargo boxes? I have a couple ratchet straps that can go completely under and around the trailer, and if the panels are secured, one could use the panel wires themselves as hold-downs for other straps. Just wondering if members here have found some nifty strap systems.

I'll often use the "Trucker's hitch"

For a chicky little gadget, the nite itze figure nine is a quick and easy "no knots" knot.

A few weeks ago, we had a torrential rain. One of my leaders was clogged, and water overflowed the gutter adjacent to my patio. I watched as the water got deeper, as it crept closer to my patio doors. I have since cleared it of the blockage.

We had a rainy prediction for today, and tomorrow. This morning, I checked to make sure the leader was clear.

You know... an ounce of prevention is worth a pound of cure.

Years ago when I lived with my dad he had one gutter that the downspout would get clogged by debris from a neighbors maple tree. I took a sprinkler wand and turned it into a down spout clog remover by removing the sprinkler head and taping a steak knife beside the angled pipe at the top.

The sprinkler wand is an alluminum tube about 6 feet long with a curve at the top that bends about 75 degrees. The angle allows you stand a few feet away from the over flowing gutter and poke a hole into the junk collected at the entry point of the down spout.

When I moved away I built another one for his house using a doggy nail file for the stabber and took the original tool with me. While my neighbors look at me like I have 3 arms using the tool in a heavy rain they pay somebody to climb a ladder and do what my tool does.