@KITROBASKIN
I find his explanation a little confusing. But if I did the math correctly, it seems like it's about a 16:1 fresh gas to Old gas ratio.

I keep 4D Maglites and alkaline batteries around in case of solar flares/emp etc. Hope I never need to use them. I have some other classics too but the 4D lights were bought after watching a tv about life after a nuclear war.

bykfixer said:
I keep 4D Maglites and alkaline batteries around in case of solar flares/emp etc. Hope I never need to use them. I have some other classics too but the 4D lights were bought after watching a tv about life after a nuclear war.
Click to expand...

Stefano said:
The panels are 120 W
These are the new panels, they are wired in parallel while the previous ones had a different aesthetic and were wired in series.

Translated into practice: with the previous panels I exposed half of them from the window (and the others remained in the shade) the charge did not occur or was negligible, with those in parallel even if I expose a portion to the sun the charge takes place (even if with less speed )
If for some reason I could not go out into the house or garden to recharge this is very important (my window does not allow you to expose the whole panel.

This Power Station also has a built-in torch with two levels and a flash but compared to previous models it has a throw light instead of flood.
It does not have a high capacity (there are models with higher capacity also equipped with wheels) but it weighs about 10 kg and is easily transportable.

Edit: It uses LifePO4 batteries and at 2500 cycles they should still have 80% of the initial capacity.
The heavier version which also has a higher capacity has batteries that at 3500 life cycles still have 80% (these are the manufacturer's claims)
Click to expand...

I tried charging the Power station (at home)
At 4 PM with a non-optimal angle of the sun and with the panels lying on a table near the window, only one illuminated by the sun (the others in the shade)
I get only 5W This does not surprise me because given the season and the time I should keep that panel at 45 ° but it is not possible.
I wanted to simulate an extreme charging scenario.
Unfortunately with the panels folded (3 folded on themselves and one open) the refill is at zero as in the inversion of the previous panels.
Maybe I didn't quite understand the manufacturer's claims.
I will need this device tomorrow to save the contents of my refrigerator, due to maintenance work on the electricity grid up to 7 hours without energy.

Marketing hype that touts capabilities but does not convey reality for other conditions. Remember that the country of Germany is really big on solar and we know how cloudy that place can be. Hopefully you (Stefano) can get your panels arrayed in the most productive place.

Poppy said:
@KITROBASKIN
I find his explanation a little confusing. But if I did the math correctly, it seems like it's about a 16:1 fresh gas to Old gas ratio.
Click to expand...

I found the COVID distance/duration guidelines triggering quarantine confusing but kind of understand the line needs to be drawn somewhere. Some of my old gas has the look and smell of shellac. No way that is going in a fuel tank. Proper disposal is difficult.

KITROBASKIN said:
Marketing hype that touts capabilities but does not convey reality for other conditions. Remember that the country of Germany is really big on solar and we know how cloudy that place can be. Hopefully you (Stefano) can get your panels arrayed in the most productive place.
Click to expand...

I was hoping that the new version would work (albeit with reduced power) even folded and with only one of the four panels exposed to the sun.
Unfortunately, recharging that power station in the window is almost impossible, if I open the four panels entirely and exposing only 1 or 1/2 of them to the sun I get only 5 W.
To recharge I have to go to the street, it is not a problem because the weight of it is about 10 kg - for this reason I did not buy the larger version (2000W inverter and 27 kg of weight) because I would have had problems moving it.

Although I did not make a comparison on the same day these parallel wired solar panels are perhaps better than the ones I received first, they both have 120W but these with a different aesthetic and the big blue handle seem to have a 10/15% in more yield.

Stefano, I’m dealing with a used battery pack with bad cells; having to test all 48 in groups of 8, hoping to get something worth using. 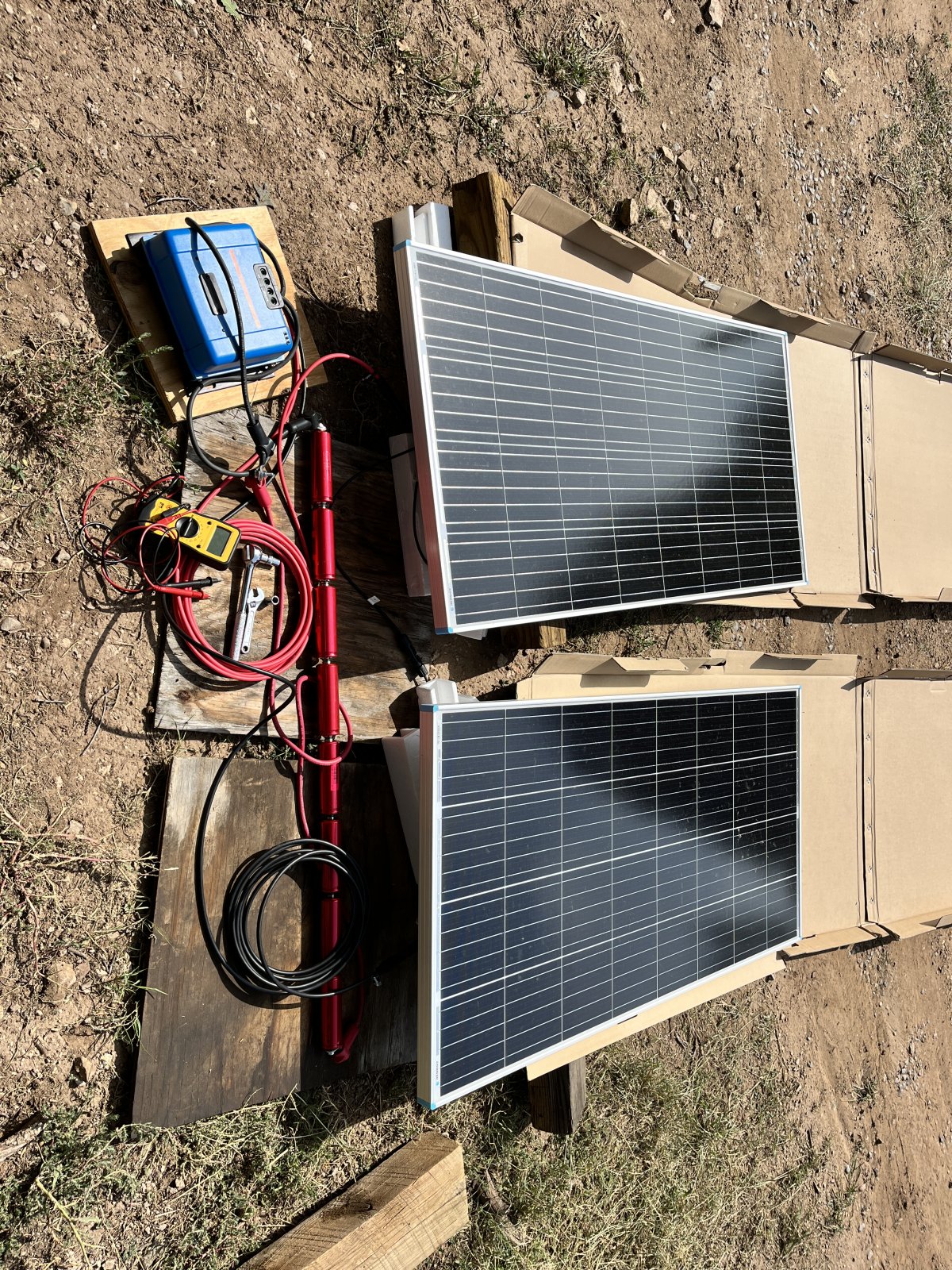 Two 175 watt panels in series for this 24V setup. Remember battery State of charge dictates how much energy the charge controller will provide the batteries.

The all important load test: 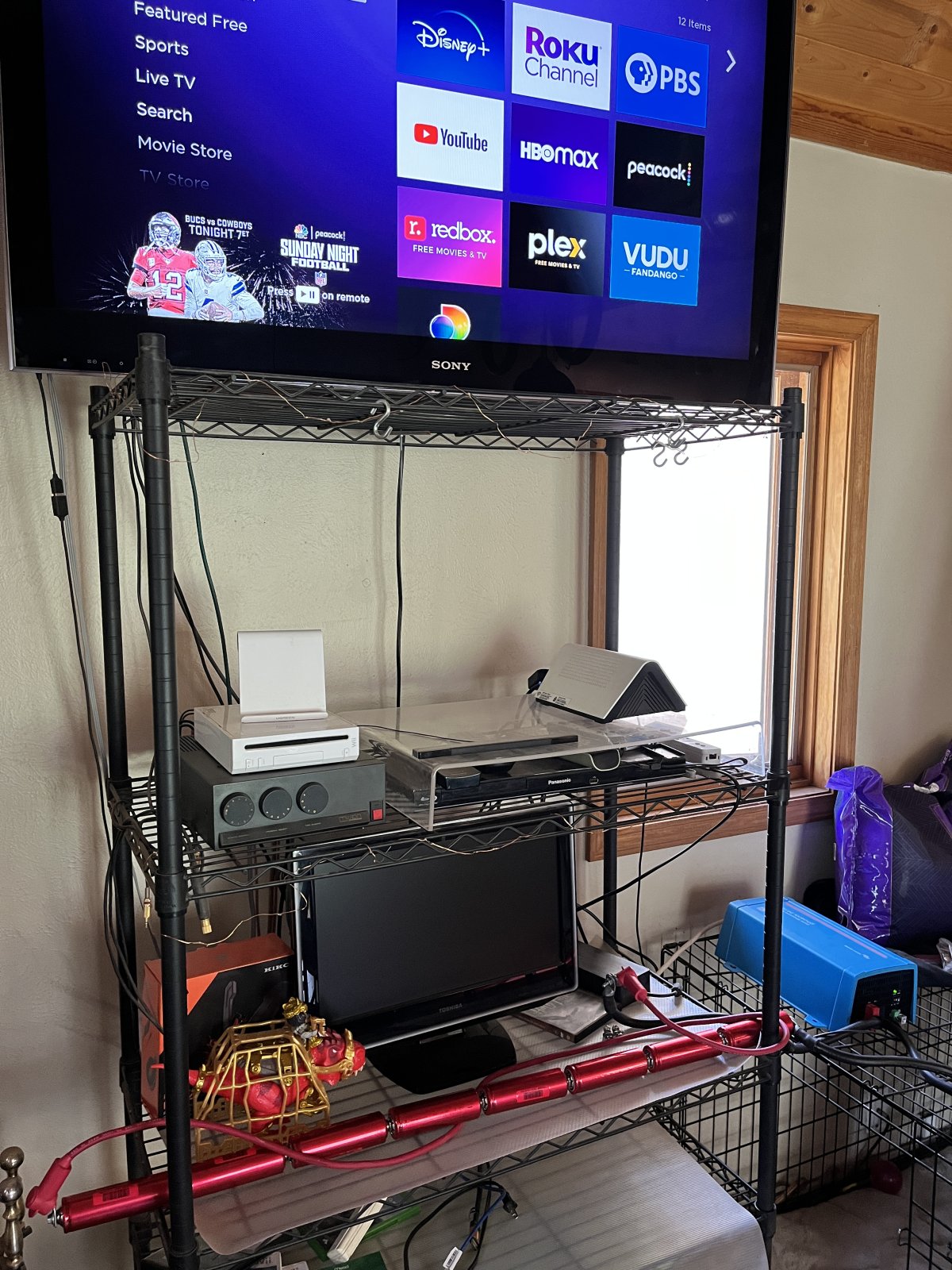 KITROBASKIN said:
That series of eight 38120’s (LFP) is running the tv and roku.
Click to expand...

What capacity do those eight batteries have?

Stefano said:
What capacity do those eight batteries have?
Click to expand...

Nominal 3.2 volts, rated 8Ah each cell.
Had to purchase a dongle to enable Bluetooth connection with the Victron inverter. The Victron SmartSolar charge controller has one built in. One can always purchase an actual display/interface for each. This system is not just a backup/emergency-flee a wildland fire (if there is enough time to load it up). The idea is to run the 24/7 items like Viasat satellite connection and son's aquarium with this, so that the home system inverter can be set to 'search' for loads, thus allowing sleep mode at night and when we are not at home. Working towards not needing a generator.

Are those panels above new or backup units? 200W?
A

I moved a steak from the freezer to the reefer last nite to thaw for tonite. I'm prepped.

aznsx said:
I moved a steak from the freezer to the reefer last nite to thaw for tonite. I'm prepped.
Click to expand...

Heck yeah!!
While grilling 2 pork chops I figured there was space not being used so I tossed two hot dogs on part of the space and a baking potato. Now cooking the chops for 20 minutes meant the potato was nowhere near done but..the skin was nice and crispy, the hot dogs nice and scorched and lunch for tomorrow is already prepared. I'll nuke the potato tomorrow.
Last edited: Sep 11, 2022

Are those panels above new or backup units? 200W?
Click to expand...

New Renogy 175 watt rated. Labeled 12V and one panel will not charge a 24V battery bank. These smaller panels cost more per watt than the standard 72 cells.

Different manufacturers use different MC4 type solar panel connectors. Some require a special tool to disconnect. I used diagonal wire cutters to remove shrouds so I can use my hands to remove.

The beauty of these industrial Headway cells is that small lengths of all-thread can be used to link batteries, as well as bolts onto busbars and wire terminations.

One third tested and so far maybe 8 cells are bad and hoping no more. I contacted batteryhookup about the problem. They responded quickly initially but the situation is worse. We will see how they respond.

mc4 connectors can be overly tight, for some of my gear I don't connect them till they click into place.
If they're mostly connected, you'll still 'complete the circuit' for charging.

Yesterday I made a Anderson to 2.5mm DC cable for my neighbor;; then mc4 ~ Anderson ~2.5mm DC (two separate cables)
so he can connect his powerbank to a panel he's looking into.

Figured I'd help him get started....

A type of prep

I label mine 2.5 because they look almost identical as the common 2.1mm (inner pin diameter)