Where can I find Lumen output ratings for McGizmo's lights?

I must just be blind or not looking in the right place, but where can I find the output numbers in Lumens of all of the McGizmo lights? Also is the HD45 the only 2 cell light he makes? I'm REALLY starting to like that PD....

There are no "official" lumen ratings of Don's lights as Don trusts his IS much less than we do !

"Unofficiall" IS results indicate about 50lumens on high for the McLuxIII-PD.

Aleph ratings will depend on LED and driver used, and I cannot remember ratings for the HD45.

50 Lumens for the McLuxIII-PD? On ONE battery? Thats terrific! What would the runtime be on high and low for that matter? That light is looking sweet. Is he still building them?
T

I've never seen a HDS best a PD. That puts the PD at at least 60 lumens, if not more.

What? I may just have to get one of those, depending on the runtime! 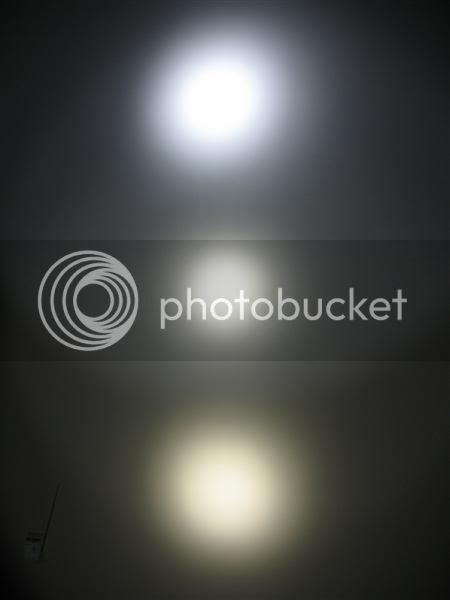 McLuxIII-PD is one terrific light!
I think runtime on high is expected to be around 1 hour 45 minutes.
You will find this and a lot more info here:
https://www.candlepowerforums.com/threads/85527

Location
down the road from Pleasure Point.

thesurefire said:
I've never seen a HDS best a PD. That puts the PD at at least 60 lumens, if not more.
Click to expand...

It depends on what bin is used in the PD.

FOr exampe, my PD has a TWOJ driven at 500ish mAh, which puts it around 50-65 ish lumens at the emitter. But after the optics inefficiency about 35-45 Lumens. The HDS 60's are worst case senerio measured out the front, since they are more likely to be T bns driven at spec or slightly above, they will be brighter than the PD on max output. I have seen my HDS U60 beating the PD without a question, but because od the reflector used in the PD it has superior reach and thus may seem more powerful, but I assure you the HDSs are more likely to be brighter than the average PD as far as pure flux is concerned.

Then again, DOn never intended the PDs to be wowsers. THey are simple yet state of the art practical lights for those who are happy with the specs. It's not a LionCub whose poor LuxIII is driven to K2-level to satisfy the light-meter whores.


However, if you are talking about a UX1K or other custom emitters powered PD, then all bets are off. Someone out here probably has a wonder LED like a UWOJ in their PD driven to 1 amp and can **** the snot out of a U85, but then we have to see a show down to believe it, don't we now?

Anyone know what the TK is putting out?

You mean the initial McLux-TK ... the mother of all custom light?

Less than that ... significantly less .... it had a Q-binned LuxI low done at 400mA and a relatively inefficient reflector compared to what Don uses now. But of course I don't hacve exact numbers.

Where to find a Ti-PD converter for more output?