Will flat stacked pack and blade type batteries take over the market?

I'm not a soothsayer but I'm sort of seeing a trend here knowing that laptops and electric cars and cell phones have been major driving sources of battery technology and manufacturing in the past. I'm seeing Dewalts Powerstack battery out this year and the talk of blade type batteries in electric cars as the future of a lot of batteries in tools and electronics and with that I'm thinking the cylindrical cell dominance of many markets may be coming to an end in the near future perhaps the next 5 years we will see a switch away from 18650/21700 cells and even the 46800 cells may be short lived and not really saturate the non EV market.

I think my main concern is these flatter type cells don't bode well for the flashlight market and typically unless they design some sort of packaging that fits in a hand well that is standard allowing for easy replacing/swapping of batteries and have widespread availability of quality performance cells we could see new production of cylindrical cells decline in the future along with possible price increases and factories shut down due to shrinking markets.

What sort of spurred this thinking is a youtube on Tesla and I think a company called BYD? that produces blade batteries and his anouncement of a $25,000 EV using these batteries instead of cylindrical cells. The video touted the battery chemistry and design as very safe and up to 50% more energy dense in vehicles using I believe lithium iron type chemistry. I don't think it is overall as energy dense as lithium cells but the design of the packs allows for tighter packing and better cooling and also incorporates the pack into a framework/support of the vehicle on top of it all perhaps dropping the weight of a separate frame.

I for one don't see flat type batteries easily good for flashlights myself but for lanterns they would be fine and work and flood type lights also good but the cylindrical cells lend better to fitting in the hand and also pockets plus super easy to change cells. We have already seen disposable keychain lights and now essentially cell phones similarly with non replaceable by the user battery packs on the market and even rechargeable flashights using lithium ion cells that are not replaceable more and more and overall the average person seems to accept that reality without pushing for devices that have inexpensive easily replaceable batteries.

I'm sort of on the fence right now on it all as seeing these flat type batteries costing more than unprotected and even protected cylindrical cells having the same ore more capacity not really having a manageable range of common sizes as there are billions of devices perhaps of a million differing products or more with thousands perhaps different sizes, shapes, and capacities of flat type batteries vs a limited range of cylindrical cells of varying capacities. While I do use lanterns and work/flood type lights I spend a lot more of my time using cylindrical cell based lighting and enjoy the ease of swapping out cells for an instant continuation of running them vs having to set aside the light/device till the battery has sufficiently recharged to use. These flat type packs (for now) don't offer that level of convenience at all as a greater cost per mah I think.

What are your thoughts on the future of flashlights and batteries with these battery types that look to overtake the market in the future?

If you're an automaker venturing into the BEV space, you use prismatic cells unless your name rhymes with -esla. Upsides are lower cost and higher energy density than cylindrical cells. Downsides are reduced resiliency, more ... complex ... thermal management, and greater difficulty capitalizing on improvements (cost, chemistry) that have historically deployed to commodity cylindrical formfactors first.

Tesla remains committed to cylindrical cells: 18650, 21700, and the forthcoming 4680. The capabilities of the 4680 will be interesting - by my back-of-the-napkin calculations it will be an impressive ~26Ah and almost all of the assessments I've seen suggest that its current-delivery capabilities will be a step up from other high-power Li chemistries. It's entirely possible that the design enhancements within the Tesla cell could be migrated to other formfactors, blurring the line between high-density and high-power cells, ergo the cylindrical cell might continue to soldier on for those that need the robustness of a commodity cylindrical cell.

I agree with you entirely but the fact that Tesla has admitted they ARE going to use the blade cells in a low end car to me suggests that this technology is an up and coming competitor and likely could be improved and possibly overtake cylindrical cells in the future. It is possible that smaller 18650 and 21700 cells could be discontinued entirely once the 46800 cells become more mainstream and then the competition will be non-cylindrical cells. I do think the blade type cells that are incorporated into a sort of spinal column type frame such that it actually can replace that part of a vehicle and serve a dual purpose could be an advantage in auto design for lighter weight and smaller vehicles. I also think that likely a lot of less expensive lower power EVs will be produced vs the higher power ones and if the blade type batteries can manage for these that would be a lot less cylindrical cells in future production.

I think what sort of started me thinking is how powerful the Dewalt Powerstack battery is. They have compared it with a larger 21700 cell pack using 3 parallel sets/rows at 12Ahr vs a 1.7Ahr Powerstack and the Powerstack under the most demanding loads...... beat it. Now there is only one Dewalt Powerstack battery on the market and it is smaller than a 2Ahr 18650x5 pack by far. If they are able to make larger batteries using the same technology the ability to outdo 21700 cells with less space is going to shake up the market for sure. I sort of consider the design similar to unrolled cylinder cell batteries stacked like a 5 layer sandwich myself but the chemistry is a little different but still lithium ion.

The famous Juul may play a role in the future of flashlights. That's right, the little quit smoking device. See, vaping devices began as an electric cigarette, hence the name. In many cases they looked like a cigarette down to the tip that glows like Rudolph's nose. They had little round batteries in them.

Then as per usual some folks came along and improved on them, even making "high end" custom jobs with a nice glass vessel for the juice and exotic bodies, but still the same round batteries. They did not require a lot of power in the early days. Those "in the know" called them toodle puffers because they "smoked" like a cigarette.

One day the cloud maker market developed and hit the vape market like an atomic bomb using 18650, then 20 or 21700 cells. The once popular toodle puffer was suddenly only for sissies. No real vaper would be caught dead with one of those things. It was all about modification.

Now runtime with a cloud maker was not as important as the surge ability without the thing exploding. Meanwhile gas stations and kwikee marts were selling disposable toodle puffers by the millions. And when Juul arrived things really got going. So much in fact a gigantic cigarette maker bought in on the deal.

Yet most of the dedicated vaper crowd insisted on reusable devices. Nearly any flavor of e-juice could be had or even flavorless. And suddenly the "pod" market developed. Oh the dedicated mod-crowd all insisted they'd never catch on while internet vape stores couldn't keep them in stock. They came in various shapes like a football, a flash drive, a carpenter pencil and even one that was a fidget spinner.

Combine that with "touch screen" technology where a circuit is completed by the user touching both sides of an object like a flashlight and viola…
A viable market for blade batteries in flashlights. I own a keychain light and a hand held light made by Energizer that use touch technology to activate them. Now both have disposable batteries but point being they can be user serviceable to replace the battery. Energizer is a battery company so they sell products that use their disposable battery. But what if Sofirn, or Klarus saw a market? A market that like vape pod devices have a USB port?

I definitely see a future for the round flashlight simply because it's round. Round is easy to hold onto. Yet that does not mean their future fuel source has to be round. Especially with lights not designed for super bright output, but more for general purpose uses. Like cloud maker vape devices there will be a market for extreme output too and round cells will likely play a role. Yet for a 2-300 lumen light there's definitely potential for side by side blades. It's just a matter of time. 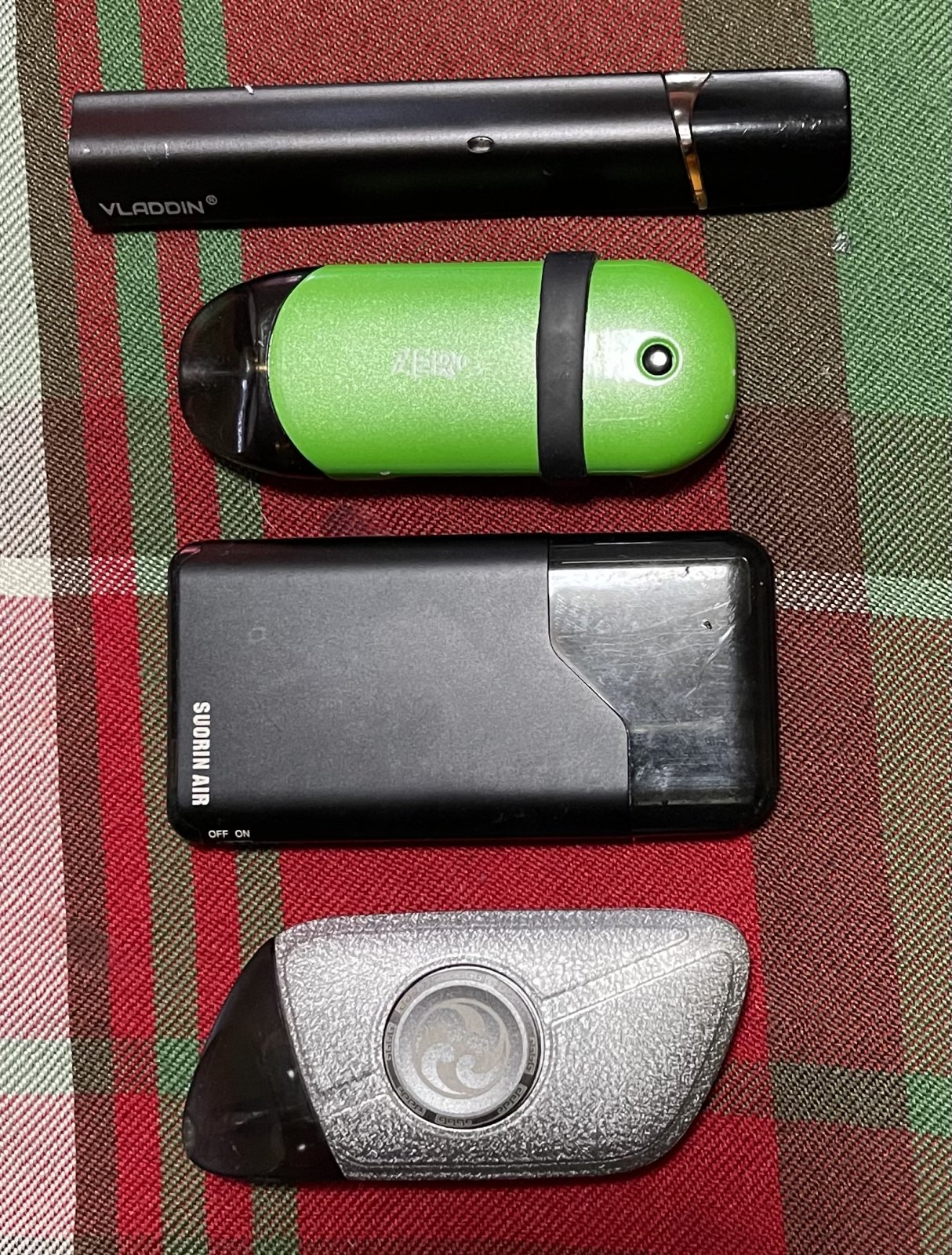 Top to bottom:
A Juul type device, a flashdrive size device, a business card shaped device and a fidget spinner device.
All tout the capacity of an RCR123 except the credit card shaped one that touts 900mAh capacity.
The Juul type device has an LED draw indicator that is bright enough to find dropped car keys or find the toilet at 2am.
Last edited: Dec 28, 2021

Lynx_Arc said:
I agree with you entirely but the fact that Tesla has admitted they ARE going to use the blade cells in a low end car to me suggests that this technology is an up and coming competitor and likely could be improved and possibly overtake cylindrical cells in the future.
Click to expand...

Imagine that's going to be LFP chemistry where the physical robustness of cylindrical Li-ion isn't necessary due to its lower overall reactivity and inherently greater cycle life.

Some flashlights already use prism cells, surefire keychain light, and nebo slim+. and i'm sure many others, i just have those 2. but i'm not sure i like the idea of a cell in a light that I can not remove.

alpg88 said:
but i'm not sure i like the idea of a cell in a light that I can not remove.
Click to expand...

I don't either, but the general market seems to want everything to have a USB port on it, which has equated to sealed/tightly-integrated designs steadily gaining market share over more conventional designs with battery compartments and replaceable cells. I suspect that other more demanding market niches will continue using designs built around replaceable cells, but even there we see USB ports for inboard charging gaining a foothold.
N

Location
Somewhere west of where you are

In my world which is two-way radio, it's about 50/50. Motorola uses a lot of 18650s and prismatic in packs depending on which radio. Same with Icom, some even using 4 18500s instead of 2 18650s.
In my other world which is cameras, older cameras such as Nikon/Canon use 2 18500/18650 packs. The rest of the world (except for a few old Kodaks) uses flat cells.
In your world, it's hard to imagine a Streamlight or Maglight with flat cells. Even harder to imagine holding one. Impossible to imagine a cop carrying one.
You must log in or register to reply here.
Share:
Facebook Twitter Reddit Pinterest Tumblr WhatsApp Email Share Link

Will Dewalt's new Powerstack battery tech take over the market?

Z
Any noticeable difference between 10 year and the new 12 year duracell AA batteries?

S
Why no ENELOOP LITE in US market